Danish-Finnish forward Michelle Karvinen had a unique, albeit brief introduction to Russia’s WHL. She was called to pinch-hit for the KRS Shenzhen Vanke Rays in the postponed championship final, after COVID-19 delayed the postseason and precluded several team members from returning to the squad. While she did not play the regular season with KRS, she had an opportunity to experience their passion and the league’s hottest rivalry first-hand—not to mention a reunion with her college coach, Brian Idalski, in the process.

“I hadn't even been on the ice once with the team before we played the first game,” Karvinen described from Copenhagen, where she is preparing for the 2022 Winter Games. “I didn't even know, really, who was D and who was a forward. [Laughs] So I knew the names, but I didn't know the team. It was for sure a challenge and it was difficult.”

Karvinen’s globetrotting career has taken her across Europe and North America, including an impressive stint in the NCAA with Idalski’s UND Fighting Hawks. She has competed the better part of the last five years in Sweden with Luleå HF/MSSK, opting to move last season to HC Lugano—scoring the championship-winning goal to secure the Swiss title. She is currently splitting her time between Denmark and Sweden in preparation for the Olympics. I caught up with Karvinen between practices to learn more about her brief stint in the WHL, graphic design prowess and much more.

Gillian Kemmerer (GK): How long was a reunion with your college coach, Brian Idalski, in the cards?

Michelle Karvinen (MK): One year before I joined, I had some talks with Brian. Obviously with the whole COVID situation, everything was really up in the air. In the end, I decided to wait one year—but we had a good conversation about it, and I'm happy that we could make it happen this year.

GK: Was it worth the wait?

MK: It was so much fun. Firstly, it was a great experience for me to be at the University of North Dakota. It was a perfect solution back then to get my education, but at the same time, to play hockey at a really high level. Obviously being there for four years, Brian watched me grow up a little bit. And now being reunited in Russia, it was really nice to see him and even Max [Markowitz], our assistant coach, who was actually my roommate freshman year. It was really great to see them again.

GK: Stepping in just for a championship is not exactly a common experience! How would you describe being thrown into the postponed WHL Finals?

MK: Getting to play two championships in one season is something really special. When we started talking about it, we just tried to see how we could make it possible to work together. I'm actually really happy about how it turned out. Obviously we came straight from Worlds, and I was super jet-lagged. I hadn't even been on the ice once with the team before we played the first game. I didn't even know, really, who was D and who was a forward. [Laughs] So I knew the names, but I didn't know the team. It was for sure a challenge and it was difficult. We didn't have a lot of time together before the first game. I think you could see in the second or third that we had a couple days together just to figure out everything.

MK: It was a really special situation. I talked to some of the original players after the Finals because we tried to do our best to come in so late, but we also felt badly for the players who couldn't be there. Obviously when we didn't win, I was sad, but I also knew we didn't have a whole season before that. Other players had done all of the hard work to get to that final—obviously it’s a team sport, we win and lose together—but you felt it extra for them. It was more their season than it had ever been ours. It would be fun after the Olympics to have more time together to be with them.

GK: I know that your exposure was so limited, but what was your impression of the Vanke Rays as an organization overall?

MK: Very professional. It's something I had heard about before coming there. Everybody said that the players were treated really, really well. It's nice that they are taking the lead in women's hockey and giving these opportunities for us to play the game that we love and actually get a decent paycheck for doing it. Many girls around the world have multiple jobs just to play. Kunlun has given the opportunity just to focus on playing, and it’s something really cool. You could feel that it was a full-time job—everyone has more energy invested into developing the team.

GK: Did you sense the compete level of the WHL?

MK: It was a really fun series with Agidel. Obviously, we wish we would've won, but it gave the feeling of the level of play. It was high-level hockey. We also played against SKIF in the preseason tournament in Sochi and I was impressed with them. It's a good league and some of the players are on their respective National Teams, the top in the world.

GK: What does the lead-up to Beijing 2022 look like for Team Finland?

MK: We'll have two more camps. This next camp we have is against Canada, three exhibition games against them in Finland. I think that will be really important in order for players to show what they’ve got in order to make the team. But obviously we have some players that are young. We had eight new rookies for this World Championship, so they have a ton of skill, but I think it was really important for us to have them get a little bit more comfortable. Anything can happen, and we are working extremely hard all the time to be well-prepared before the Olympics.

GK: How are you personally preparing?

MK: I'm practicing with U20 First Division boys, and then my dad is coaching me in the morning with a bunch of other players who are in the bubble for the Danish National Teams. And then I'm actually playing games with a Swedish team because there's a bridge from Copenhagen to Malmo. It’s really close. I’m a little bit all over the place!

GK: What’s it like to work with your dad?

MK: It’s amazing because he's definitely the biggest reason why I am where I am now. He has built my style of playing. For me, it just felt right to be with him before the Olympics. I feel really comfortable and I trust what he's doing.

GK: What is his approach?

MK: It’s based on using time and space in the right way. We talk a lot about how hockey is a very explosive sport. Whenever you can, you should save energy on the ice. It's a lot about how you glide and how you are actually balancing on the skates. It's very detailed in how you're skating and how you're handling the puck.

GK: You were able to put another set of skills—graphic design—to good use in creating the logo for Women's Worlds in 2019. Tell me about that experience.

MK: It was a really cool opportunity. The Federation knew that I studied graphic design in school and asked if I wanted to do it. Obviously I said yes right away, but it's quite a challenge designing the IIHF logo. It’s really strict what you can do and what you can't do. I think I found a really good way to pay tribute to Riikka Sallinen, as it was her last World Championship. She quit for 10 years and had three kids, then made a comeback. Powerful woman. I was actually playing on the same line as her. I made the logo a tribute to her, but also a tribute to the Finnish nature. 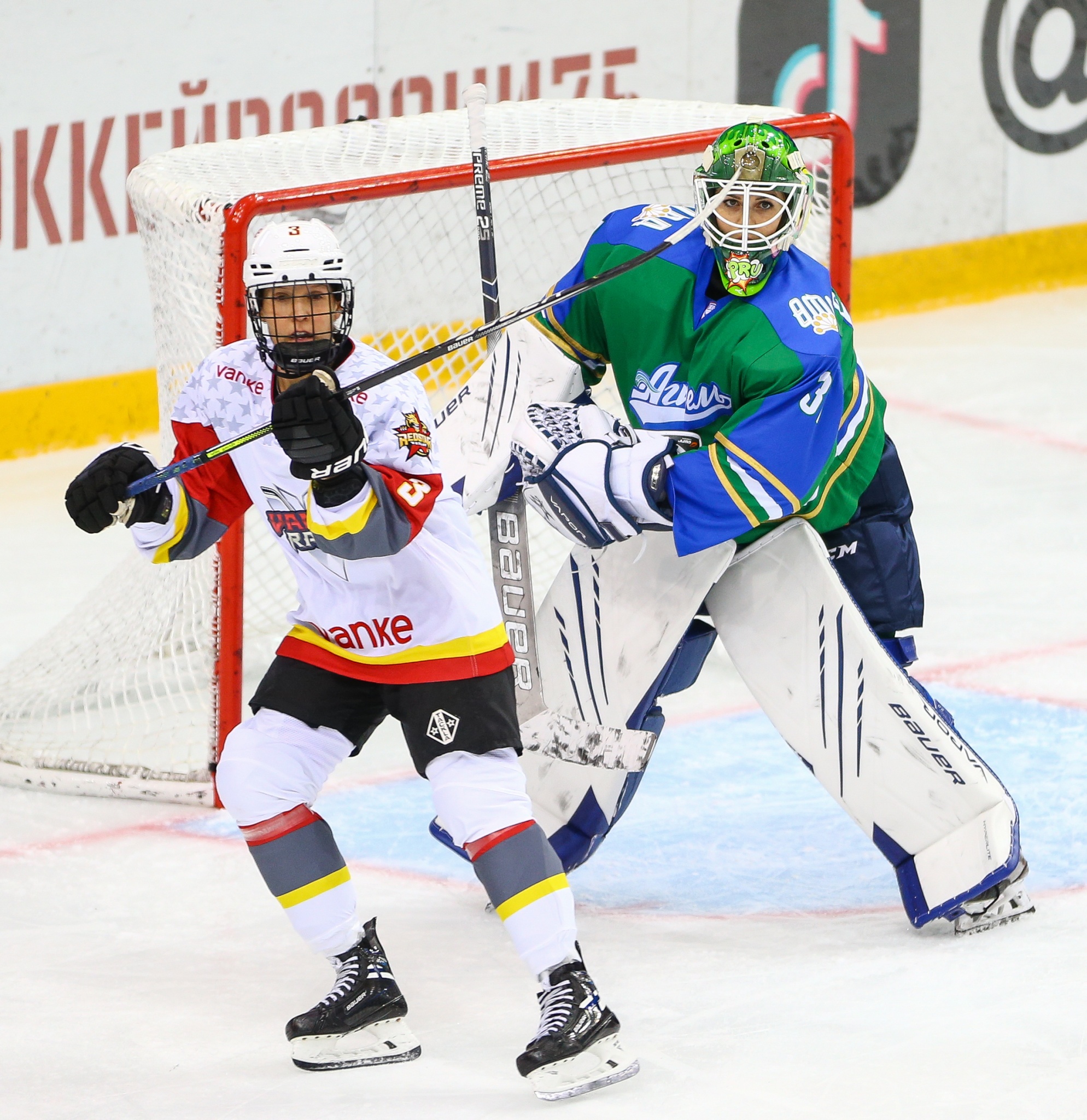