SKA’s teenage sensation Matvei Michkov became Russia’s youngest ever international as the season got started at the Karjala Cup in Helsinki. Aged just 16 years, 11 months and 2 days, the young forward broke the record set by Alexander Ovechkin in 2003 by more than a year. He also broke the all-time Soviet and Russian record of 17 years, 7 months and 8 days set by legendary goaltender Vladislav Tretiak in 1968. Only one other player has represented Russia at the age of 17, and that was Nikita Chibrikov, who also made his international debut today.

Michkov is just one of a raft of young players featuring on the national team for the first time as Russia repeated its strategy from last season and used the Euro Hockey Tour to look over several prospects among its juniors. The starting line-up certainly had an unfamiliar look to it: Ak Bars forward Dmitry Voronkov centred the first line and wore the ‘C’, with Dynamo’s highly-ranked youngster Dmitry Rashevsky, 21, and experienced Severstal forward Daniil Vovchenko, 25, flanking him. At the back, Spartak’s 20-year-old blue-liner Alexander Nikishin was paired with Traktor’s Sergei Telegin, 21, in another youthful Russian team

However, if last season’s young eagles sprang a series of surprises in Finland, overcoming adult opposition in fine style, this year things were a bit different. With fewer restrictions due to the pandemic, opposing rosters were much stronger: Suomi drew on many players looking to put their case for a role on the Olympic team next February. 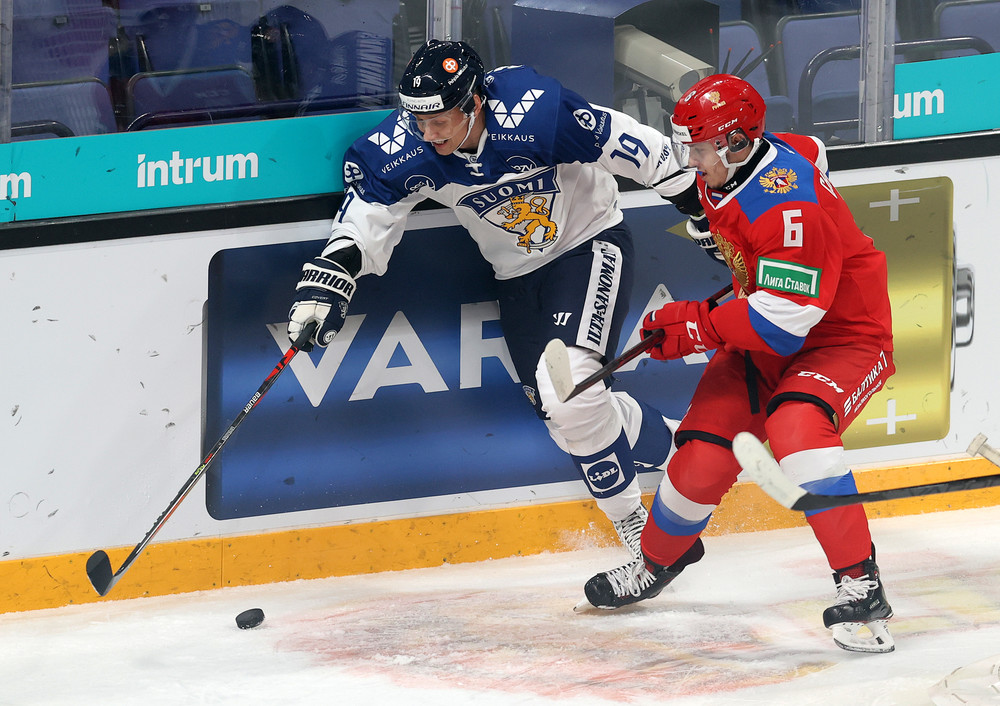 And the host nation duly took control of the game early on. The first period saw Finland enjoy the bulk of the play without finding a way past Russian goaltender Dmitry Shugayev, another Severstal player making his international debut in this game.

In the second period Finland continued to control the game, and this time the host nation got its rewards with two power play goals midway through the session. First, Harri Pesonen got on the end of a well-worked move and the former Metallurg and Ak Bars man converted Miro Aaltonen’s feed from the right-hand circle. Then, with the Finns enjoying a 5-on-3 advantage, Aaltonen doubled the lead with a powerful one-timer. That made two points for the Vityaz forward.

Early in the third, a major penalty saw Ivan Zinchenko removed from the game after a high hit on Mikko Lehtonen. That led to a third goal for Finland when Valtteri Filppula, a veteran of 16 seasons in the NHL, fired home to give his country a commanding advantage.

That was how it finished, with Metallurg’s Juho Olkinuora getting a shut-out in his first international game of the season after stopping 17 shots from the Russians. The result sees Finland join Sweden at the top of the Euro Hockey Tour standings. Yesterday, the Tre Kronor began their campaign with a 4-1 victory over the Czech Republic. SKA goalie Lars Johansson backstopped Sweden to the win, with former Torpedo forward Carl Klingberg among the scorers. Jokerit’s David Sklenicka had an assist on the Czech’s consolation goal.

Oleg Bratash, Team Russia acting head coach
Of course, we have some concerns about the game, and about the penalties we took, but we’ll figure it out. Taking into account the level of the opposition, I’m happy with the quality of Russia’s play, especially at equal strength.

I hope we haven’t harmed Michkov. We’ll advise him, fix some of his immaturity without the puck. Even so, he showed his skills and even had a shot on goal. For a player on the fourth line, that’s fine. You expect them to play less, these are young, inexperienced players.