Vityaz Podolsk forward Daniel Audette was told that his game was well-suited to Europe. A top-five producer on the Western Conference’s last place team, he has lived up to expectations in spite of the headwinds facing his squad. A second-generation professional hockey player, Audette admits that he once dreamt of being a goaltender, a position he now terrorizes as one of the KHL’s top point snipers. During his father’s tenure with the Montreal Canadiens, he spent time in close proximity to one of the best netminders in hockey history.

“One memory that stands out the most is when my Dad was playing in Montreal and I would love to go into the room to be with José Théodore,” Audette shared from Podolsk—a recollection that would fill any hockey fan with envy. “He was my favorite goalie. I was trying to convince my dad to let me be a goalie, but he wanted none of it!”

Sometimes father knows best. A 2014 Montreal Canadiens draft pick, Audette spent several productive seasons in the AHL prior to moving his career to Finland in 2020. He logged 50 points in 60 games for Lukko and attracted the attention of Vityaz, who nabbed last season’s revelation Justin Danforth from the same Finnish club. Audette inked a one-year contract with Podolsk in June, and has swiftly found his rhythm in the KHL. I caught up with the exciting newcomer on his transition to Europe, the outlook for his struggling roster and more.

Gillian Kemmerer (GK): The Lukko-Vityaz move is an established route. Justin Danforth made the exact same transition last season. Did he have any influence over your decision?

Daniel Audette (DA): I mean, somewhat. I saw the success he had in Lukko, first of all. Then he came here and did really well and signed a one-way NHL contract. It was not a terrible path to take, so that example for sure played a little part in it. I also talked to him before signing here and asked him about the team.

GK: What did he have to say?

DA: He didn't convince me to come here, for example, but he told me good things about the organization and the team and how it's a nice place to play. There is an advantage that you're in the Moscow area and don't have to travel as much, for sure.

DA: Aware of that for sure. After a couple of road trips, you realize that it's fun to be close to Moscow! 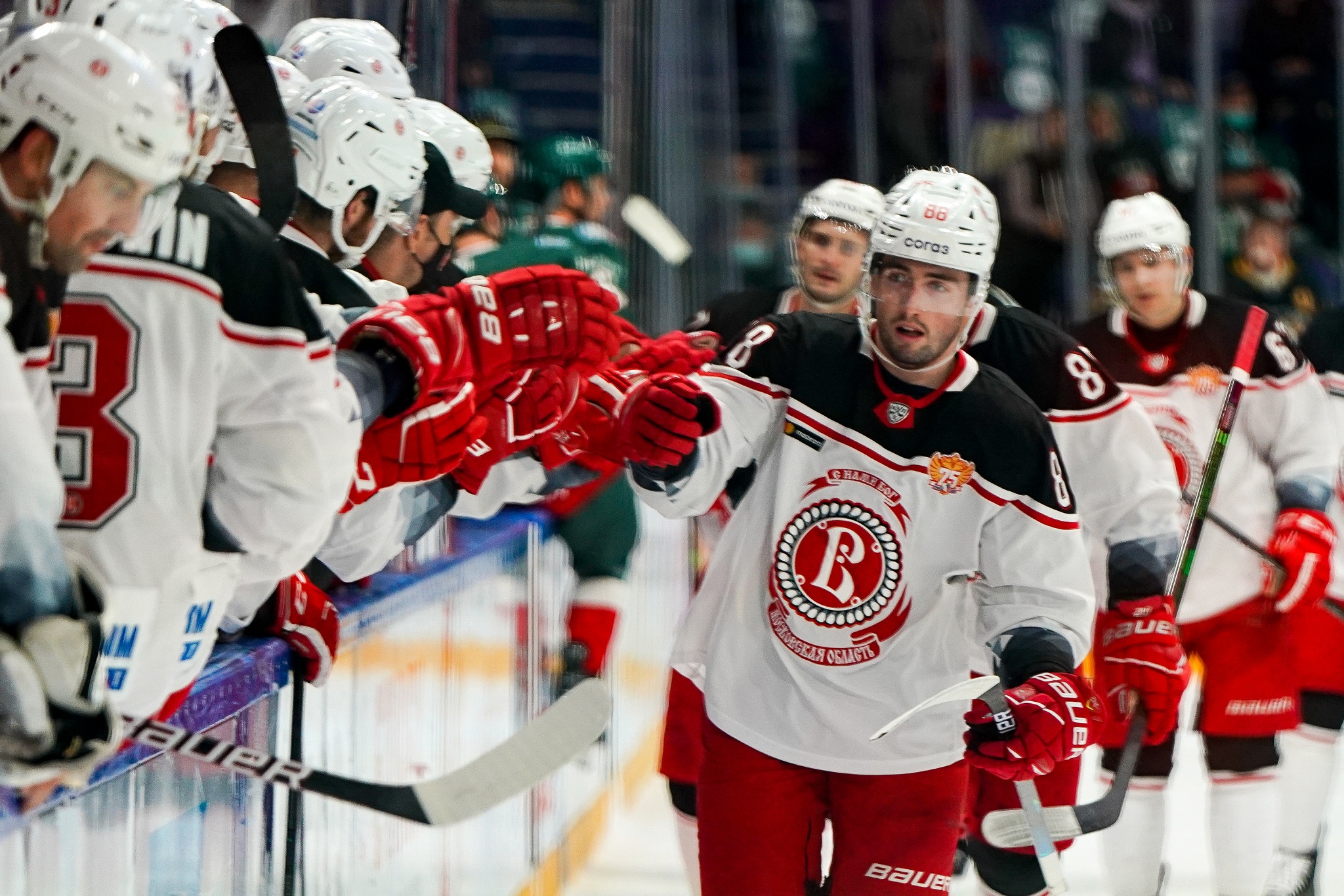 GK: What brought you over to Europe in the first place?

DA: I was seeing decent success in the AHL, but not as much as I was trying to have. Then COVID happened and I received some offers from Liiga. I thought it would be a great time to go, especially with all of the uncertainty there was in North America back then. It worked out pretty well. I went to Liiga, we had a really good season, and I just kept moving forward from that point on.

GK: How would you contrast the playing style that you encountered in Lukko versus what you have here in Vityaz?

DA: They both play a very fast-paced, skills game. I guess Liiga's a bit more conservative. They hold the defensive side a bit more tightly, but here in Russia there's obviously an immense amount of skill. The differences are fairly small.

GK: Your transition has been impressive, to say the least. Did you expect—or were you ever told—that you were suited to the European game?

DA: For a while, its been something that people have been telling me—that I have a playing style that's fit for Europe. I like to use the more skilled side of the game, and I am able to go out and play the way I feel confident in playing. I didn't let anything hold me back and have not been overthinking things. That part was big.

GK: What is the Vityaz mission for this next portion of the season, in light of your performance struggles? Where do you specifically fit into that?

DA: We’ve been playing some decent hockey, so that's kind of the surprising part. When you look at our record, you wouldn't be able to tell, but we've actually been playing some good games. We're always pretty close and have a chance to win. It has come down to a couple of mistakes every time. We've been trying to figure out a way to keep those mistakes out of our game, and like the old classic saying, play the full sixty minutes. It's always disappointing to lose no matter how the game went personally. For me and my line, I think we have had good chemistry and we're just trying to do everything we can to give our team an extra chance to win it.

GK: What has the transition been like for you on a majority Russian squad?

DA: I guess I got the warmup with that last year in Finland. I was the only Canadian guy until Christmas. I got used to being with people who speak different languages and it has been the same here. You learn how to make friends, and you learn how to get along even though it's not always the easiest communication-wise. The imports have been really good together.

GK: How is your Russian coming along? Any favorite Russian foods yet?

DA: I just stick with the classic hellos and goodbyes—the little things like that. I've learned the day-to-day words that you use often. Surprisingly enough, I picked up on the numbers pretty quickly. I definitely like borscht, and that has been one of my go-tos almost every meal as an appetizer. It’s the first time I’ve put sour cream in soup.

GK: Have you had a chance to explore any of the road cities?

GK: You are obviously Habs royalty. I'd love to hear about some of your earliest memories in hockey. I ask this question to every player, but I would think your stories are extra special.

DA: I’ve had some good memories for sure. Being around the dressing room with my dad as a kid, and also being in a hockey city like Montreal growing up was incredible. For me, one memory that stands out the most is when my Dad was playing in Montreal and I would love to go into the room to be with José Théodore. He was my favorite goalie. I was trying to convince my dad to let me be a goalie, but he wanted none of it!

GK: Does Dad watch your games over breakfast?

DA: Yeah, he wakes up pretty early to watch them. He even watched once when we were in Vladivostok. I think it was a seventeen hour difference. He's been watching almost all of my games and giving me good feedback. He tries to not put too much in my head and just let me play. That's something I appreciate. I think his favorite go-to is just to tell me to shoot the puck more. That's pretty basic.

GK: Averaging over a point per game, I guess you've been listening. Who would you say has had the biggest influence on your career aside from your dad?

DA: Aside from my dad, I would have to go with two people. I had a coach in midget, Paulin Bordeleau. He was probably one of my favorite coaches I've ever had, and he's taught me a lot. His son is my skills coach, so it’s just a big hockey family. He has helped me with a bunch of decisions I've been making, including the move to Europe. 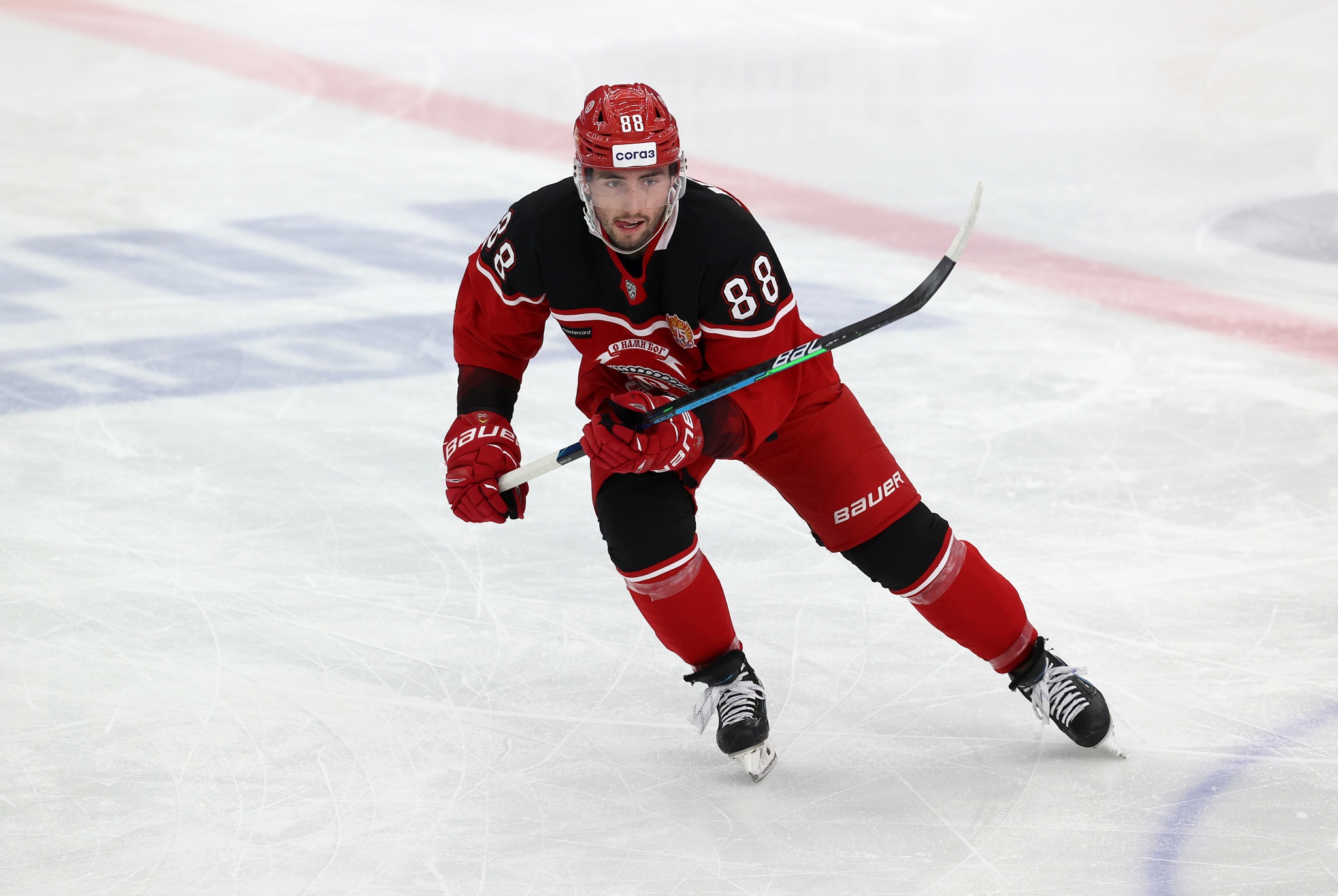 GK: If you could play on any team in hockey history for one night, which would it be?

DA: I think, for me, it would be when Chicago were winning the cups between 2009 and 2015. Playing with Patrick Kane and winning the cup with them would've been one of the most special times.

GK: If the Gagarin Cup were determined by popular vote, why should we choose Vityaz?

DA: That’s the first time I’ve gotten that question. I don't know. Our games have always been pretty entertaining, that's for sure. Every game has been tight and there haven’t been a lot of blowouts. It has been tight games and a lot of drama.