KHL.ru continues its ’Man of the Week’ column with Metallurg’s newcomer Philippe Maillet. The productive forward is currently the second scorer in the league behind Vadim Shipachyov and had a fantastic start to his KHL venture.

Philippe Maillet is currently Magnitka’s leader in scoring, with 13 (6+7) points in 8 games: he’s collected three points more than Nikolay Goldobin and four than Brendan Leipsic. He’s also tied in first place for +/- differential, sharing with D-man Mikhail Pashnin a plus-10 rating. Moreover, he’s on a five-game scoring streak, with 12 (5+7) points over that span. In Monday’s 5-0 victory over Admiral, he was initially credited with a hat-trick, but his first goal was actually scored by Andrei Chibisov. His production also helped Magnitka scoring at least four goals in five games in a row — Metallurg won all the games played after losing 2-7 to Salavat Yulaev on Sep. 7. The Southern Ural franchise is currently the second seed in the Eastern Conference, trailing only Salavat Yulaev.

Maillet was born in the Montreal metropolitan area on Nov. 7, 1992. He played kids and junior hockey in Quebec, debuting in the Quebec Major Junior Hockey League in 2009 with the Victoriaville Tigres. After a rookie season with just 12 (3+9) points in 58 regular-season games, he always augmented his production, reaching 83 (25+58) points in his final year as a junior, the 2012-2013 campaign. Despite accumulating good numbers in the QMJHL, however, Maillet was never drafted in the NHL, and after four years with the Tigres he moved on with a collegiate career in Canada.

Maillet made his collegiate career debut with the University of New Brunswick Varsity Reds in the 2013–14 season. After his career in U Sports, where he won several awards in his senior season, he moved on to professional hockey in the AHL.

After a solid U Sports career, Maillet spent the next two years with the Ontario Reign of the AHL. His productive play, and 54 (16+38) points in 2018-2019 won him a contract with the Washington Capitals of the NHL.

Maillet continued his strong AHL play with the Hershey Bears, the Capitals’ affiliate team, scoring 44 (17+27) points in 2019-2020. The next year, he had his NHL debut, without appearing on the scoresheet in two games. Maillet, however, had more than a point a night with the Bears. After spending two seasons within the Capitals organization, as an impending free agent, Maillet opted to cross the Ocean and sign with Metallurg on Jun. 11.

Maillet inked a one-year deal with Magnitka, and his signing was praised by the Magnitogorsk side’s bench boss Ilya Vorobyov.

“Maillet is a fast forward from the AHL,” Vorobyov announced. “He played in the top-six there. He’s not a big guy, but very quick, with excellent hands and a great shot.”

In the end, it ended up that way — Maillet is very quick with the puck and makes thing happen with rapid decisions.

He adapted to his new reality right away and is currently the league’s second scorer after Dynamo Moscow star Vadim Shipachyov. On Monday, Sep. 13, he had three points as Metallurg defeated Neftekhimik 4-0 on home soil.

“Our line played well,” Maillet said after the game. “However, the team’s two points are much more important than my two,” he added. “Naturally, when you net a double you often think about getting to a hat-trick, but we have a long season in front of us and plenty of games to reach this goal.”

Two days later, Maillet had a hat-trick of assists as Metallurg downed Avangard 7-4. He had another three-point game on Monday when Metallurg got rid of Admiral 5-0 in its second win in the Far East.

Magnitka is now one of the hottest teams in the league, and Maillet is its top scorer: not bad for a player in his first season in the KHL. 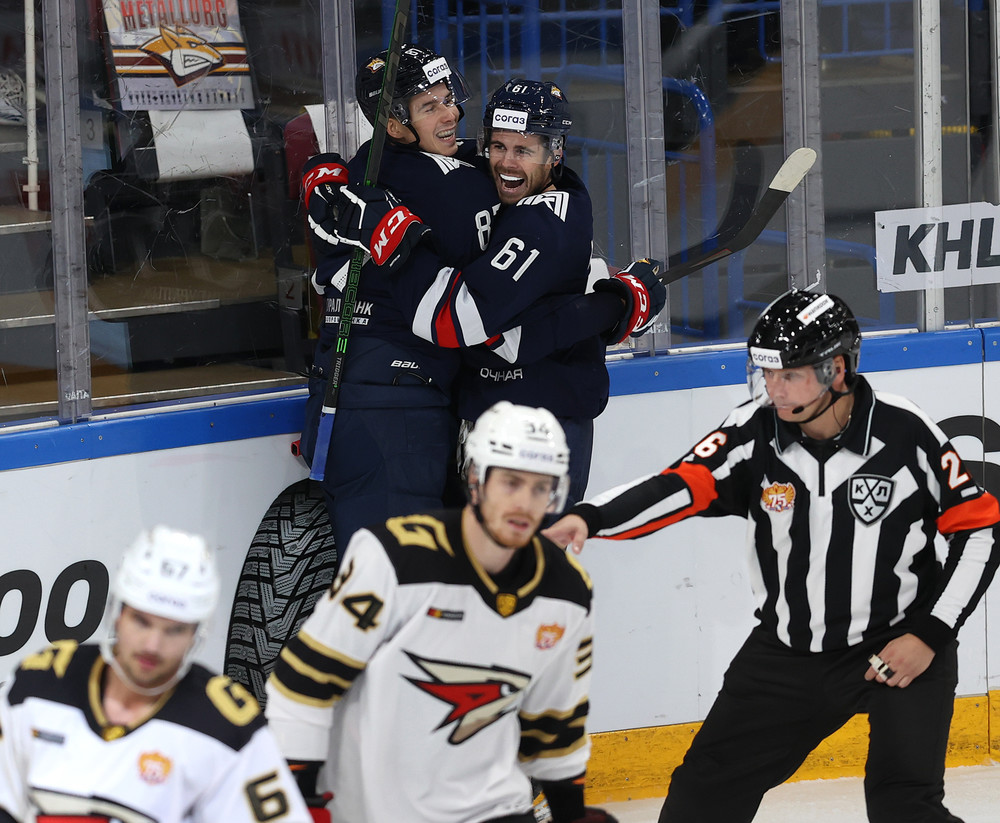