Vladislav Kodola grabbed the headlines with a goal and an assist as Severstal stunned previously unbeaten Salavat Yulaev in Cherepovets. There was also a game-winning performance from CSKA’s Konstantin Okulov as the Army Men won in overtime at Barys. Avangard was comfortably stronger than Spartak and SKA eased to a home victory over Amur.

Salavat Yulaev’s unbeaten start to the season came to an end in game eight thanks to a late goal from Vladislav Kodola.

There seemed to be little on for the 24-year-old forward when he got the puck on the right-hand boards, midway inside the Ufa zone. The visitor’s defense was well set and Kodola had no obvious path to goal. So he set about creating one. Turning inside, he found himself heading for the face-off dot and a plausible shooting lane. Instead of shooting, though, he pulled off a neat drag to get past #11 Panin and get to Juha Metsola’s front doorstep. From there, it remained to squeeze a shot inside the post and send Salavat spinning to its first loss of the season. 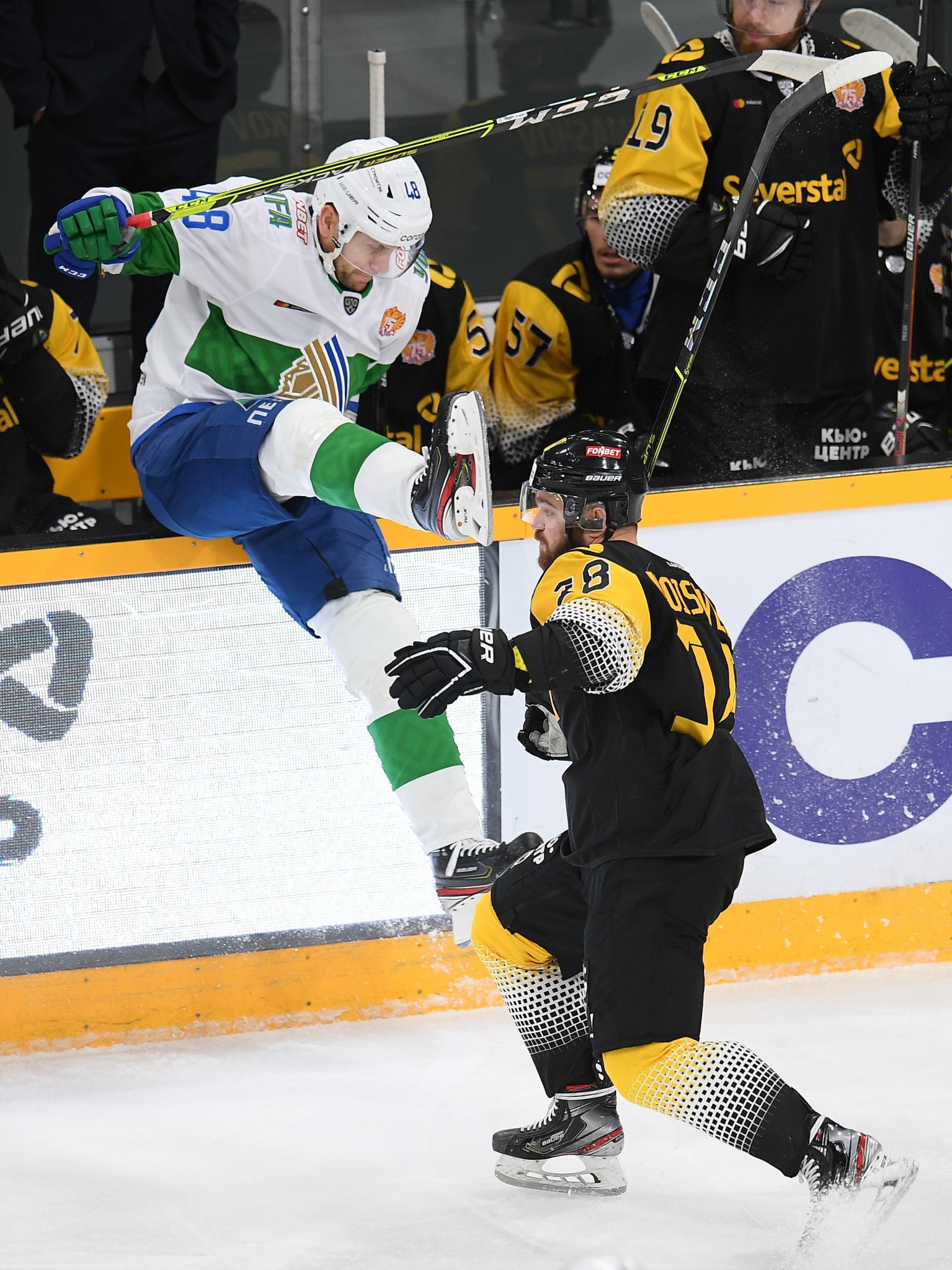 Kodola’s goal was all the remarkable for its timing. Not only was it a 59th-minute winner, it came barely a minute after Teemu Hartikainen’s power play marker brought Salavat Yulaev level on 56:50. At that point, it seemed that Severstal’s brave effort might come up short. Konstantin Shostak’s 33 saves frustrated the visitor, but with a single blow Hartikainen found a way to tie the game and, apparently, have the action set for overtime. Kodola changed all that.

Earlier in the game, Severstal produced a battling performance that rarely allowed the high-flying opposition to settle. The first period was shaded by the home team, and although Ufa ramped up the pressure in the second it was Robert Rooba who opened the scoring late in the frame. The Estonian fired home from the right-hand circle after more good work from Kodola behind the net to create the chance.

For the second game in a row, CSKA came from behind to grab an overtime victory. In doing so, the Army Men also avenged a 3-6 loss at home to the Kazakhs. Since then, though, Barys lost twice in games against Dinamo Riga and Jokerit.

Barys got off to the better start here and might have grabbed an early lead when Curtis Valk stripped Artyom Blazhiyevsky off the puck and came close to beating Adam Reideborn as he returned to the CSKA line-up. Then, when the first power play of the evening went to the home team, Nikita Mikhailis broke the deadlock midway through the opening frame. Roman Starchenko was the architect, feinting to shoot before picking out Mikhailis with a pass that gave the forward a simple finish.

Once in front, Barys looked to press home its advantage. In the second period, the home team dominated the game, outshooting CSKA 18-4. Matt Frattin dinged one off the piping and Reideborn denied Cody Kunyk a first KHL goal. That failure to score proved costly: late in the game Konstantin Okulov tied it up in freakish circumstances. The CSKA forward shot his initial shot deflected behind the goal-line. On retrieving possession, he looked to shoot the puck back to the slot and benefitted from an outrageous deflection off the back of the luckless Ortio.

It was the second game in a row that Okulov took us into overtime. Today, he continued to torment Ortio, shooting home the winner with a powerful effort that home goalie may feel he saw enough of to keep out. Defenseman Nikita Nesterov got the assist and stretches his productive streak to six games.

Clinical finishing made all the difference for Avangard on its visit to Spartak. Bob Hartley’s team had just 11 shots on goal in the first two periods, but enjoyed a 3-0 lead at the 40-minute mark. Vasily Demchenko was significantly the busier of the two goalies, but he stood up well to frustrate the Red-and-White offense.

The first period brought a big contribution from Nail Yakupov. One of the KHL’s most enigmatic talents, the 27-year-old was on his game today. First, his thrilling rush took two defensemen out of the play before he skated beyond the goal-line and set up Nikolai Prokhorkin for the opening goal after three minutes. Prokhorkin’s upswing continues; he had a goal and an assist in his previous game. 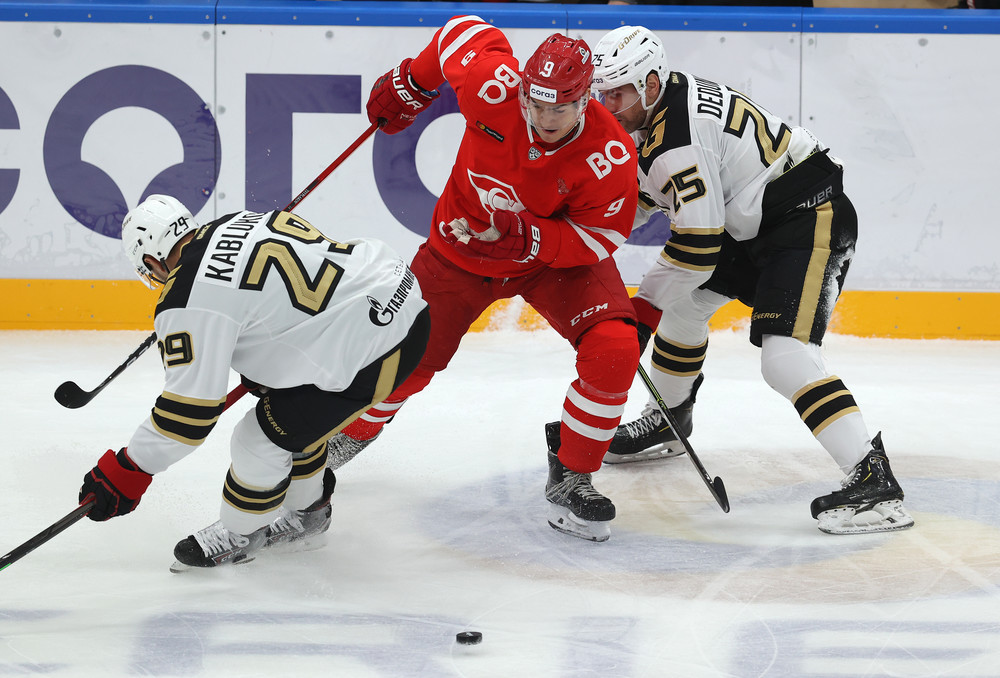 After creating the opening goal, Yakupov showed his poacher’s instincts to double the lead. The puck got caught up in front of the Spartak net and the defense was unable to make a convincing clearance. That was all the invitation Yakupov needed to pounce on a loose puck and make it 2-0.

Goal #3 came early in the middle frame on the Hawks’ power play. This time, Yakupov was the fourth forward and the potent Knight-Tolchinsky-Cehlarik combination sprung into life for the Slovak to score. That ended starting goalie Alexei Krasikov’s evening and brought Oscar Dansk to the crease.

The Swede kept his goal intact for the rest of the second period but was beaten at the start of the third when Vladimir Bryukvin bagged his first goal since moving from Dynamo Moscow. Once again, there were questions over Spartak’s defending as a shot at Demchenko rebounded all the way out of the Avangard zone and a red-clad blue liner allowed Bryukvin to steal the puck and race to goal.

SKA’s power play made all the difference as the Army Men eased past Amur. The visitor belied its lowly league position with a battling display and, at equal strength, made it hard for Valery Bragin’s team to create scoring chances. But frequent trips to the penalty box cost the Tigers dear; three goals came when Amur was short-handed.

The breakthrough arrived midway through the first period with SKA on its second power play of the game. Captain Anton Burdasov was the scorer, converting Andrei Kuzmenko’s pass from behind the net after a Marat Khusnutdinov shot flashed wide of goal. However, that was not a cue for the floodgates to open. Amur stuck doggedly to its task and limited SKA to just eight shots in the opening frame.

Early in the second, Igor Ozhiganov doubled the lead but Amur responded with a power play goal of its own to keep things interesting. The puck got caught up in a scrum between the hash marks and Danil Faizullin reacted fastest to shoot home.

However, more penalty trouble either side of the second intermission left Amur out of its depth. Burdasov got his second of the night just before the break, then Kirill Marchenko fired home a Mikhail Vorobyov pass early in the third. Joonas Kemppainen added a fifth midway through the session