Janis Jaks: “Playing for an underdog is even more interesting”

One of the first players to be awarded Player of the Week honors was Latvian defenseman Janis Jaks. The Sochi D-man posted 3 (1+2) points in two winning games in his first week and was a key contributor for Evgeny Stavrovsky’s men. Interestingly enough, earlier, the current Sochi director Renat Mamashev was also awarded Defenseman of the Week honors. Jaks quickly became a defensive leader for Sochi, and despite an unfavorable record, the Latvian blueliner has compiled an even +/- rating.

“This is my first full-time season in the KHL, I wasn’t even aware of having best players of the week, and not only of the month,” Jaks starts the conversation. “I was astonished. But it’s just the beginning; we have a long season ahead of us.”

Sochi had a rocky preseason, but the Black Sea franchise is currently in playoff competition as the ninth seed in the Western Conference. “It was hard for us in the preseason — we couldn’t score at times,” the D-man explains. “However, we played well once the regular season has started. Most of the things are going in the right direction. We really missed it at the start of the game against CSKA and lost. We also relaxed too much when we were up 5-1 against Vityaz. But it’s good to take this kind of lesson when the season is still young as a good reminder that each game lasts 60 minutes.”

However, the six goals scored to Vityaz must have helped the team feeling more confident. “Definitely,” he confirms. “It helps a lot and adds motivation. We understood that our forwards can score. However, we had some chances against CSKA as well. We didn’t take advantage of them, but creating chances is a good start.”

In his past, Jaks was already awarded Best Defenseman honors — Best Defenseman of the Week in the NCAA and Best Defenseman at the WJC D1A. “Being awarded in the KHL was very important for me, especially at the start of the season,” Jaks explains. “It’s some kind of a confidence boost for the future. I’m sure that this kind of feeling will help me as the season develops.”

Despite Jaks didn’t play a lot of games in the league, he already elected his best defenseman in the league. “I heard a lot of things about Barys’ Darren Dietz,” he says. “Then I faced him at the IIHF WC. He’s a mobile defenseman with a fantastic shot. I think that he’s the best of all the KHL blueliner I’ve seen playing so far. I won’t hide that I follow him and try to learn.”

When HC Sochi signed the Latvian defenseman, the team’s GM Alexei Badyukov described Jaks as “a two-way defenseman with a brilliant head.” “I always try to help forwards without forgetting about my defensive responsibilities. A brilliant head? Maybe it’s because I always try to make non-standard decisions. Like, for example, in the preseason game against Avtomobilist.”

Jaks netted a beauty against the Motormen, and maybe Sochi fans should expect something similar in the regular season as well. “I think everyone saw that goal,” the Latvian D-man says. “Now our opponents know what I’m capable of and will try to give me more attention. It won’t be easy to score another goal like that one, but we’ll see” — he smiles.

Jaks and Team Latvia qualified for the Olympics to win the qualification tournament in Riga before beginning the regular season. That surely helped Jaks with a morale boost returning to the Black Sea shores. “I will longly remember our game against Team France,” he recalls. “The arena was full and the fans were loud. After the final hooter, when we understood that we would go to the Olympics, it was incredible. I’ve never played at the Olympics, so I’m very excited. We’re all very excited to be there.”

At the 2021 IIHF World Championship Bob Hartley led Team Latvia between the bench. However, at the Olympics qualification tournament, Harijs Vitolins was the team’s head coach. “Naturally, there are some differences in our tactics. Bob is a very strict coach, and you should be smiling when you play. There were no smiles at the IIHF WC. At the Olympics qualifications, the locker room had another atmosphere, and we had more freedom. I think that this was an essential aspect of our success. No one was worrying too much, we simply played our way the best we could.”

Last year, Jaks started the season with Dinamo Riga. However, Peteris Skudra didn’t give him much room on the ice. “I think he was right,” Jaks admits. “It was nevertheless my first season in pro hockey. Naturally, in the NCAA, the level is higher than the junior leagues, but it’s not pro hockey. In Riga, I didn’t play my best. I was worrying too much and I wasn’t used to such a style. It’s not a surprise that I wasn’t given twenty minutes a night. I needed some time to adapt.”

Before signing in the KHL, Jaks played four years for the American International College Yellow Jackets in the NCAA’s Atlantic Hockey conference. He enjoyed his experience there. “Many say that if you’re an athlete, you’re going to get it the easy way, but I didn’t notice anything similar,” he explains. “You need to study a lot. Each year you need to pick at least four classes to follow. I had the gym at 7 AM on Monday and Wednesday, with the lessons starting at 8:30. They lasted until 2 PM. Then, we had our practices. We had some lessons later in the evening — this is how our days looked like.”

After spending half of the last season with Dinamo Riga, Jaks returned to North America and played in the AHL, in Bakersfield. There, the Latvian D-man played with Ostap Safin, a Czech with Russian roots. “We spent a lot of time together,” he says. “He became one of my best friends. He talks an excellent Russian and is a great guy.”

Earlier, Jaks played in Russia to hone his hockey skills. “In Latvia, I played for a coach who knew a lot of people in Russia, and my parents and I moved there. I first played for Dynamo, then for Spartak. Rihards Bukarts, who now plays for Admiral, played with me. We have known each other since we were five years old.”

It’s not a secret that Sochi recruited Jaks after an excellent showing at the 2021 IIHF WC. “I knew that if I played well there, it could go at my advantage,” the D-man says. “However, I didn’t think that I would win a contract with my game. I tried to play my best, and it’s fantastic to have reached an opportunity.” 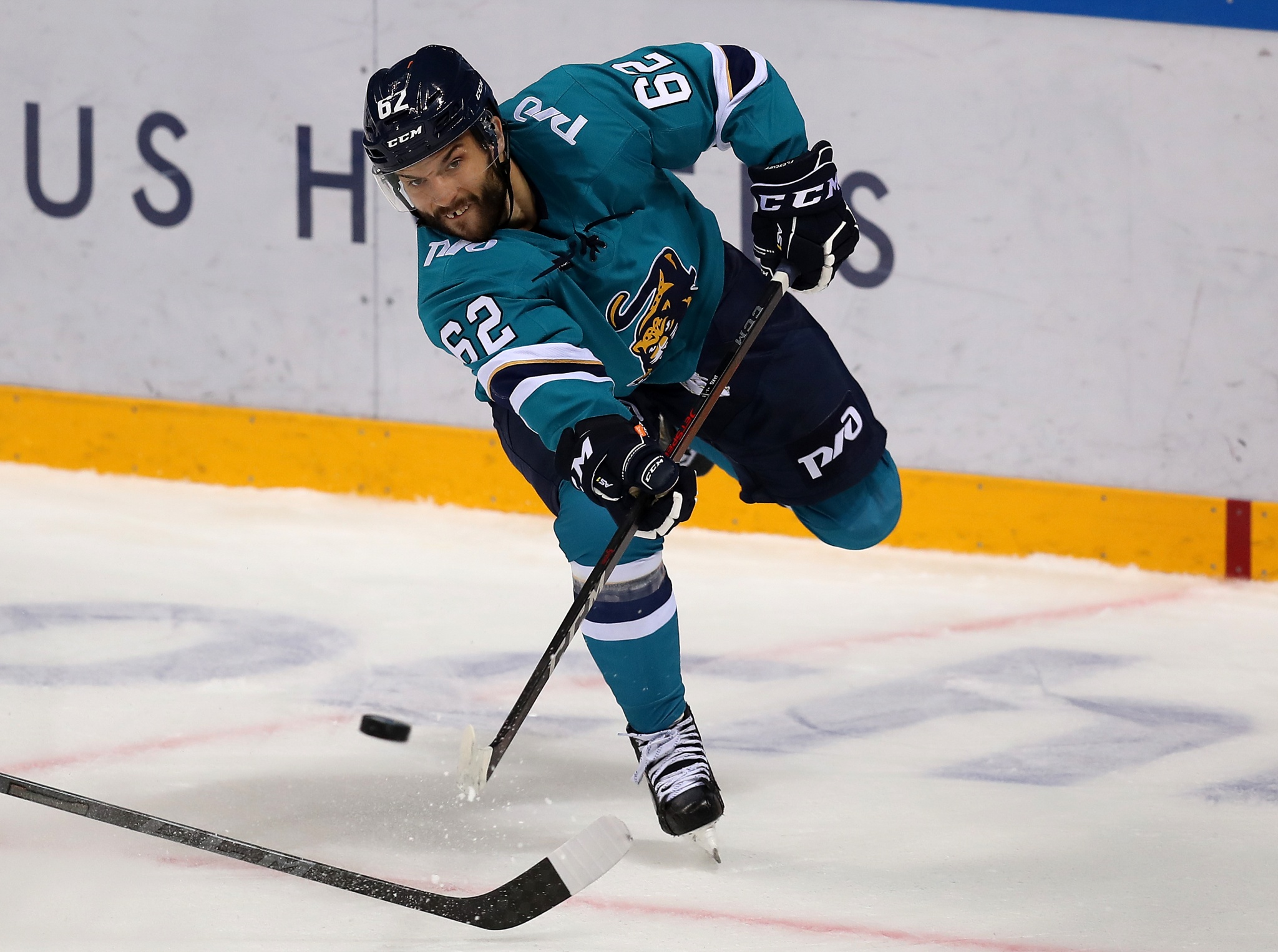 However, in Sochi, Jaks will play as a foreigner. Generally speaking, imports and international players have a lot of attention on themselves and people expects a lot from them. “I know that if something doesn’t go well, the imports are always the first who will feel the heat,” he says. “I know that I have to score and never relax too much. However, I will simply try to play my best hockey without thinking that I’m an import. I need to keep my mind free from not-needed thoughts.”

After winning many games in the NCAA, it won’t be easy for Jaks to repeat such success in Sochi. “I wouldn’t say so”, Jaks affirms. “We have a new team, and everything is different. We practice very hard, and the first few games of the season, we showed our worth. We really want to get to the playoff, and then we’ll see.”

In August, Sochi published a series of videos dedicated to the new season, titled Underdog. “This kind of thing gives a huge boost in motivation,” Jaks explained. We want to show that people who don’t believe in us are wrong. And it’s even more interesting to play for an underdog team. In America, I had the same path. When I started playing in the NCAA, the team was at the bottom of the standings, and we managed to win seasons. These histories give you a lot of motivation."