It’s one thing to meet your childhood idol—the player whose jerseys and cards filled the drawers of your room, and whose inspired actions you memorized, perhaps even repeated in your dreams. But to cover for your idol in the defensive zone is something else entirely, an opportunity that left SKA veteran forward Anton Burdasov in shock when it arrived.

“I tried 100% never to let Kovy down,” Burdasov described of his years playing alongside superstar Ilya Kovalchuk, a dream he never took for granted. “He is not so strong in the defensive zone, so I worked hard there to make sure that no mistakes from Kovalchuk were noticeable, so that he didn't get told off by the coaches. I didn’t want us to be split up, so I tried to do everything!”

A native of Chelyabinsk—a city whose mentality toward creative, Soviet style hockey left an early imprint—Burdasov began skating at the age of five. He progressed through the local system before departing for SKA in 2012. After brief stints in Avangard, CSKA and Salavat, the Petersburg favorite returned to his adopted home in 2019, where he has remained ever since. Burdasov won gold at the World Junior Championships in 2011 and a Gagarin Cup in 2015. Despite a number of impressive accolades, the thirty-year-old’s sights are now set on representing Russia at the 2022 Olympic Games.

I caught up with Burdasov from the Puchkov Memorial Tournament in Saint Petersburg, where we discussed the upcoming season, his Counter-Strike hobby and much more.

Gillian Kemmerer (GK): How would you evaluate SKA’s overall performance in preseason?

Anton Burdasov (AB): During the preseason, we generally work on tactics and different line combinations, because during the season certain players can get injured, and we need to know with whom we can replace him. Any player can come into any line and they know the tactics that will be used. We're only just starting to come out now of the main part of preseason, and as far as I know, our preseason has been tougher than other clubs. We're feeling better with every passing day, so hopefully when the KHL regular season begins, we will be in top form.

GK: You have a number of youngsters, including the sixteen-year-old phenom Matvei Michkov, on this team. How do you view their progression?

AB: I’m going to speak on Michkov first, and technically, he isn't worse than any other player. He doesn't have much experience yet, and physically, he's not quite strong enough. This is something that we can certainly fix, and in terms of technical ability, he is an excellent player. [Kirill] Marchenko is a player who always keeps trying, who is progressing. Mentally, he's certainly in the right place.

GK: You mentioned that head coach Valery Bragin is working on some early lines and combinations. Have you found particular chemistry with anyone yet?

AB: I wouldn't say that we have chemistry as such yet. However, I do have guys that I like to play with, and who I understand. For example, I have very good chemistry with [Andrei] Kuzmenko. I’ve played with Linden Vey throughout the whole preseason, and we seem to be getting on very well. I’ve also had Yevgeni Timkin in a line, and we understand each other. However, it's not a problem to play with anyone, and I will play with anyone the coaches tell me to.

GK: How would you describe Bragin's expectations of you?

AB: Bragin has the same expectations for all 22 players, including with me and everyone else. He likes the team to play very strictly in terms of the game plan, in the defensive zone and neutral zone. But in the attacking zone, there's more room for creativity, and he likes the players to improvise with their decisions.

GK: Bragin is also your coach on the Russian National Team. Looking back at Worlds, how do you feel that you performed?

AB: I wanted to win the tournament, but because of injuries and mistakes, we lost to Canada. If the team gets knocked out in the quarterfinals, then that means everyone had a poor tournament—including me.

GK: The 2022 Olympics are coming up. Is that an opportunity you are chasing?

AB: I really dream of playing in the Olympics. Even if the NHL players go, for example, I'm ready to travel there as a replacement player. I just want to be there. If the team needs me to help, then I'll be very happy to do so. But the main thing is just to actually be on the plane to Beijing.

GK: What are some of your earliest memories of hockey growing up? Who brought you to the rink?

AB: No one actually ordered me to go and play ice hockey. I just really immediately enjoyed the sport. My father bought me some old skates, so we went and skated on the local ice rink.

A coach spotted me there. He noticed that I was quite tall and he thought I had been skating for a long time, but in fact, I'd only been skating for four days. I think that I was actually two years younger than his team’s age group. They were seven years old, but I was only five at the time.

In the Chelyabinsk ice hockey academies, they don't restrict the players. We were encouraged to play creatively, looking back at the old Soviet way of playing. They were not strict with us. I can't give an example of a player who just dumps the puck in the zone. Everyone from my hometown who plays ice hockey likes to play the game the right way, with combination plays, creative plays. In Chelyabinsk, in childhood, they teach players to enjoy the game, to enjoy playing ice hockey. There is a big emphasis on that.

GK: Given Bragin’s emphasis on creativity as you noted, I would think that background gives you a leg up.

AB: Yes, in the attacking zone, he preaches good movement—we should scare the opponents in a sense, in order to make them feel a bit confused. Quick attacking plays, combination plays, lots of movement.

GK: Who were your idols growing up?

AB: Ilya Kovalchuk. I had cards and posters of Kovy in my childhood. When he joined SKA, I was in shock, of course. Everything which he did in the gym, for example, I copied him. I copied everything he did. We trained together as a pair most of the time. I even showed him the old posters and cards I had from his years playing in Atlanta.

GK: What did he say?

AB: We had a laugh about it, and we are still in contact now. We’re still good friends. I was playing with Kovalchuk in a line. I tried 100% never to let Kovy down. He is not so strong in the defensive zone, so I worked hard there to make sure that no mistakes from Kovalchuk were noticeable, so that he didn't get told off by the coaches. I didn’t want us to be split up, so I tried to do everything!

GK: Interestingly Kovy was reunited with his Atlanta head coach Bob Hartley this year, and they won the championship.

AB: If I can't win, then let my friends win. I wasn't upset. I'm always really happy for my friends. 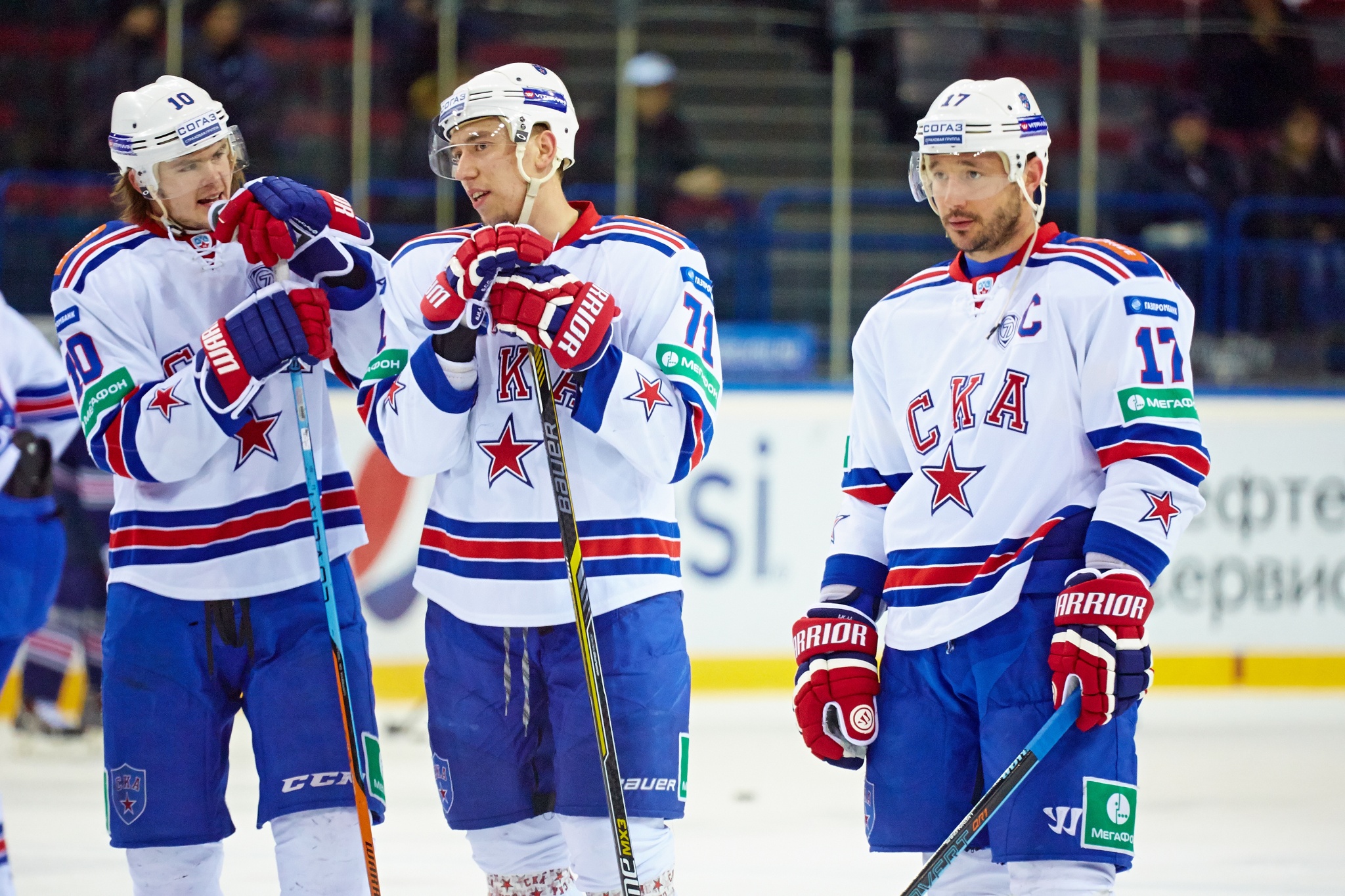 GK: What are some of your off-ice passions?

AB: I like to play computer games—specifically Counter-Strike. Igor Ozhiganov and I play together, but he's got very high level. He is basically a professional because he’s been playing for ten or eleven years, whereas I’ve only played for a year and a half. We play together with our friends who aren't involved with hockey.

GK: Did Kovy ever get in on Counter-Strike?

AB: With Kovalchuk, we played FIFA. We’d give him the TV remote and he would play with [Alexei] Ponikarovsky. Both of them were not good, so it was really funny to watch them.