The KHL approved the distribution of 505.3 million rubles (almost $7 million) among the league’s member clubs at Monday’s board meeting in Moscow. The funds came from the KHL’s TV and commercial rights.

Since 2014-2015, all earnings from the sale of TV rights have been shared among the KHL’s clubs. In the 2020-2021 campaign, broadcast rights for TV and betting companies were sold in 26 countries, including Russia. There were 1,165 broadcasts on 13 international channels, 850 on 17 regional channels, 96 on Russia’s Match TV and 1318 on the KHL’s in-house TV service.

The funds will be distributed in the same way as last season.

-        30% of the money is share equally among the 23 participating teams in last season’s championship
-        40% of the funds are divided according to the proportion of the TV revenues generated by games involving each club (thus, the teams that are most often televised receive more money)

The remaining 30% is awarded according to the teams’ results during the season:

The clubs are encouraged to use this money in the following ways:

§ Modernizing arena infrastructure;
§ Producing additional video content to promote the club and the KHL, and develop a club TV service;
§ Staging promotional and info-campaigns about the club in its local region;
§ Producing TV or internet broadcasts of any games there are not shown by other TV channels, and also improving the quality of TV broadcasts from home games;
§ Developing and delivering projects and advertising campaigns to increase awareness of club brands and, in particular, generate more interest among the untapped audience of under-18s;
§ Developing a medium-term commercial strategy for the club;
§ Organizing media video conferences;
§ Updating ticketing and access systems;
§ Enhancing the gameday services available to spectators in the arena. 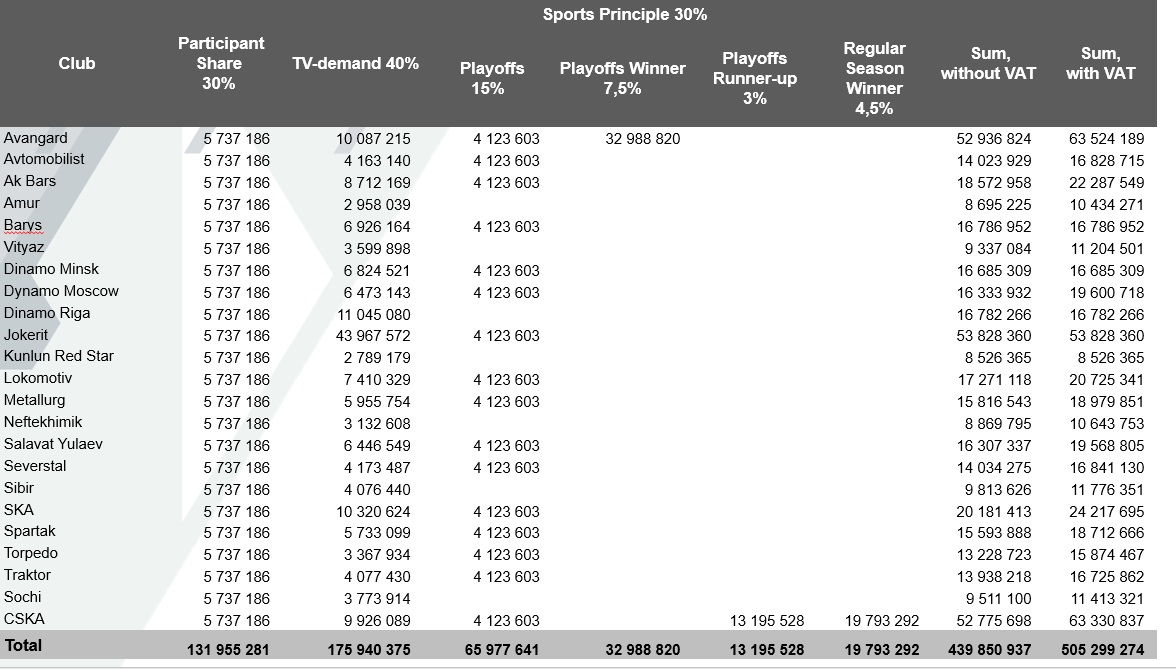