The top teams did not have it all their own way on Saturday. Ak Bars suffered a shock 3-4 loss at home to Kunlun Red Star, despite leading 3-0 at the first intermission. Avangard also had a hard time against modest opposition, eventually getting past Admiral in a shoot-out. SKA, too, needed a shoot-out to win at Lokomotiv. Elsewhere, Sochi and Vityaz shared 11 goals and Spartak got its second win of the season.

SKA toughed it out for a second hard-working road win of the season, leaving Lokomotiv frustrated. The Railwaymen, widely expected to be a serious challenger for the Gagarin Cup this season, began with an unconvincing 3-2 success over Dinamo Riga and never got ahead of this game.

SKA continued with young Matvei Michkov on the first line, and while the 16-year-old was not among the points he made his presence felt early in the game. Indeed, it was shortly after one of his shots was blocked that line mate Anton Burdasov recycled the play and set up Vasily Tokranov for the opening goal. That lead was cancelled out when Pavel Kraskovsky’s shot bounced clear and Denis Alexeyev converted the rebound.

A tied scoreline was a fair reflection of the first-period play, but early in the second SKA regained the lead when Joonas Kemppainen led an odd-man rush and took the shot himself, beating Eddie Pasquale at the near post. Loko responded with a long spell in the visitor’s zone and, after a face-off win, Alexei Marchenko fired home the tying goal. Maxim Shalunov, one of the high-profile summer recruits, got his first point with an assist on that one.

However, SKA went into the third stanza with a 3-2 lead when, late in the second, Marat Khusnutdinov found the net. The youngster got possession after Kemppainen won an attacking face-off for the Army Men and his angled shot flashed into the far corner.

Lokomotiv took control of the third period, but had a tough time getting past Alexander Samonov in the SKA net. However, with five minutes to play the home team drew level for a third time when Danill Misyul’s shot was parried into the path of Yegor Averin.

Overtime could not separate the teams, but in the shoot-out SKA prevailed thanks to successful attempts from Linden Vey, Kirill Marchenko and Andrei Kuzmenko.

Peter Cehlarik was on the scoresheet again as his impressive start to KHL life continues, but Avangard faced a real battle before edging past Admiral in Balashikha. It took a shoot-out to separate the teams, with Sergei Tolchinsky finally settling the issue after 18 failed attempts between the two teams.

Admiral began the season with defeat at Spartak, but after a one-year sabbatical the Sailors are eager to make their mark once again. Here, they opened the scoring midway through the first period with American forward Josh Kestner getting his first KHL goal. The response came five minutes later, with Corban Knight on target once again for Avangard. Knight, who scored two against CSKA in the Opening Cup, moves to three for the season. 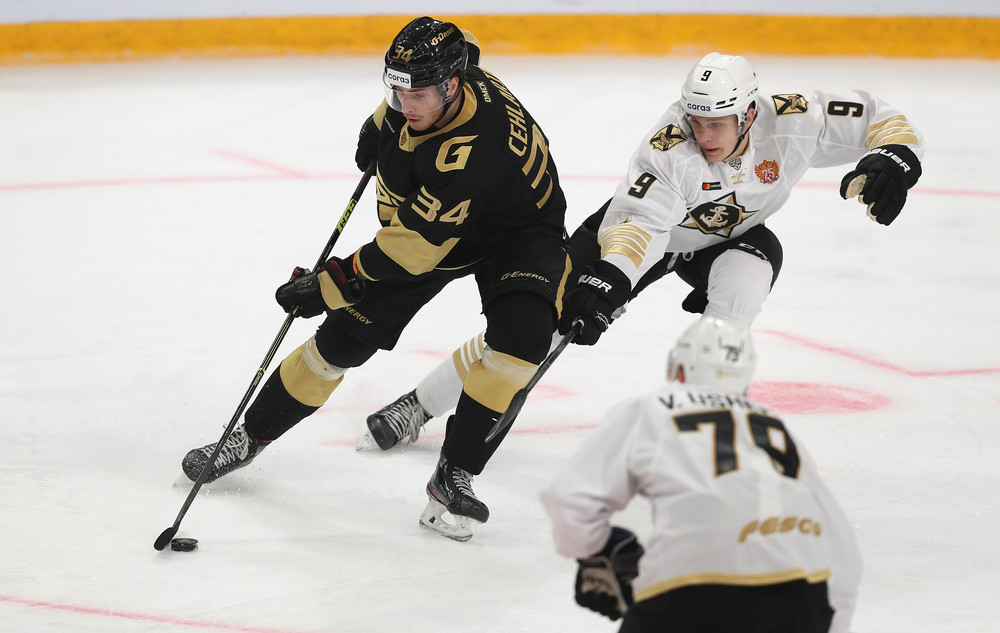 Midway through the second period, Knight was involved again with an assist on Ville Pokka’s goal. That effort survived a coach’s challenge, with Admiral believing there was an offside earlier in the move. The unsuccessful call prompted a bench minor, and with Kestner sitting it out, Cehlarik made it 3-1 with his third goal for the Hawks.

It felt like game over, but Admiral had other ideas. Vladislav Kaletnik pulled a goal back late in the second, and Vladivostok veteran Dmitry Sayustov tied it up late in the third. That secured the visitor its first point of the season, but there was nothing more for the Sailors. Another bench minor in overtime gave Avangard the initiative, and while goalie Nikita Serebryakov survived that examination, he was eventually beaten deep into the shoot-out as the Hawks took the win.

On paper, this was the day’s biggest home banker. Ak Bars, a true powerhouse of the Eastern Conference, faced a Kunlun Red Star team heavily beaten at Neftekhimik in its opening game and, according to many, some way short of the kind of roster that can compete at KHL level.

After 20 minutes, that prognosis seemed to be spot on. Ak Bars cruised to a 3-0 lead and had total control of the game. Red Star managed just two shots at Artur Akhtyamov as the home team’s summer signings Par Lindholm, Nikolai Kovalenko and Kirill Panyukov built a commanding lead. Jordan Weal, who got his first KHL goal in his opening appearance, had two assists here.

But then everything changed. Brandon Yip, an inspirational figure in Chinese hockey, got Kunlun on the scoreboard at the start of the second period. A flurry of penalties midway through the session culminated in a short-handed goal from Spencer Foo, scorer of the Dragon’s consolation goal in its season opener. Ak Bars was still dominant according to the stats, but the key figures — goals scored — suggested a close game.

At the start of the third, it was an even game. Alex Riche got his first KHL goal after two seasons with KRS where injuries and illness limited him to just four appearances. That was a big moment, and there was bigger to come when Luke Lockhart, another cult figure for this club, put Red Star ahead on the power play midway through the third. Ak Bars had time to hit back, but this was not the lopsided hockey we saw before. Visiting goalie Alexander Lazushin kept the home team at bay and Red Star recorded a first, memorable win of the season.

Goals were the order of the day beside the Black Sea, with Sochi opening a four-goal advantage, blowing it in the third period, then snatching an overtime win. For Vityaz, which came out on top in a nine-goal game at Torpedo last time out, summer signing Niko Ojamaki produced a heroic performance but could not bring his team victory despite scoring three goals.

Sochi, unimpressive in pre-season, went into today’s game as the leader of the Western Conference thanks to its 4-0 win over Amur. And, by the first intermission it had another 4-0 lead. Denis Vikharev opened the scoring after 22 seconds, and there were further power play goals from Alexander Zhabreyev, Martin Bakos and Andrei Bakanov as the Leopards assumed complete control.

Vityaz hit back at the start of the second through Fyodor Malykhin, but it seemed like a mere blip as Vladislav Valentsov restored the home team’s four-goal cushion. But then came a remarkable third period recovery as Vityaz saw its Finnish forwards take charge. Miro Aaltonen pulled one back at the start of the session, before Ojamaki blasted a hat-trick to tie the game after 50 minutes. At that point, the momentum was clearly with the visitor and Sochi had to dig deep to survive the last nine minutes of a frame in which it managed just two shots on target.

Survive Sochi did, though, and overtime brought a quick decision when Latvian defenseman Janis Jaks potted the winner off a Vikharev feed.

Spartak’s winning start to the season continued with a second successive victory. After opening up with a 4-1 success against Admiral, Boris Mironov’s team followed up by defeating another team from the Far East.

The two games had something in common. Both began with a goalless first period, and the second saw Spartak take control with two unanswered goals. Today it was Ivan Drozdov, a 21-year-old forward making his second appearance for the Red-and-Whites after leaving Dinamo Minsk in the summer. That foundation was built upon by Emil Pettersson, potting his second goal in two KHL starts since his arrival from Vaxjo Lakers. 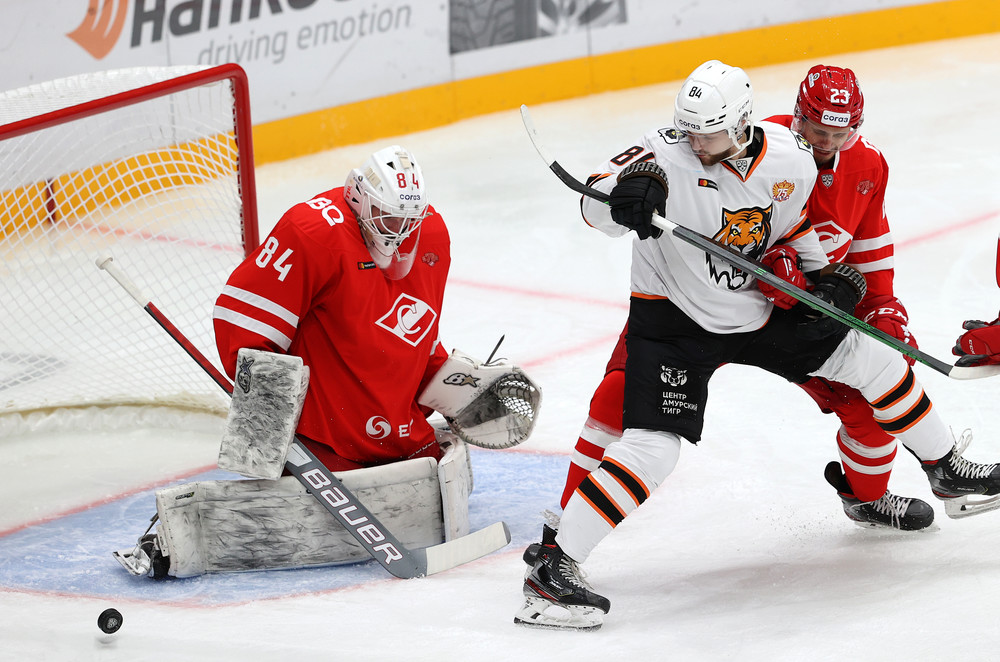 Amur, blanked 4-0 at Sochi in its opening game, finally got off the mark 40 seconds into the third period when David Tomasek potted his first in the KHL. Almost immediately, Spartak had to kill a penalty as a previously comfortable afternoon suddenly got more complicated. But the home team held on, and Andrei Loktionov’s empty net effort sealed the win.