There is a legend inside of the Tretiak family that goes something like this.

Once upon a time, when HK Sochi goaltender Maxim Tretiak was a child, he asked his legendary grandfather a question: “Why do you have all of your teeth?” It was a natural query for one of history’s most beloved hockey supernovas, and the answer was rather simple. "Because I'm a goalie,” Vladislav Tretiak replied. “I have a mask, and the puck doesn’t hit me.” Perhaps you could say that the rest was history. On the basis of dentistry— bolstered with the allure of beautiful gear—young Maxim was sold on the most noble position in sports.

To assume the position of goaltender with a nameplate like Tretiak requires undeniable courage. It is an invitation for scrutiny, criticism and comparison, headwinds that a goaltender of any surname faces on a nightly basis. But Max has handled the pressure with admirable grace—another quality inherited from his grandfather—soaring to his best performance last season, recording his first career shutout and logging more playing minutes than ever. In tandem with new arrival Magnus Hellberg, one of the top netminders in the KHL, Tretiak hopes to build upon the momentum of last year’s success and to learn from his battle-tested partner.

Tretiak began his career with the Red Army junior team in 2012. He spent several years within the CSKA organization before stints with Admiral Vladivostok and Dinamo Riga. While granted only a handful of starts at the KHL level in prior seasons, Tretiak appeared in 31 games for Sochi during the 2020-2021 campaign. I caught up with the goaltending scion from the Puchkov Memorial Tournament in Saint Petersburg. We discussed everything from his beginnings between the pipes to his love for race cars, as reflected in the new mask he will be sporting this season.

Gillian Kemmerer (GK): How will you capitalize on the momentum of last season, where you achieved several personal milestones—including your first professional shutout?

Maxim Tretiak (MT): Last season was huge for me. I got a lot of time on the ice and played many games. Several were not as great as the others, but still I was working hard. I think the last year became a new beginning for me because I was entrusted with much more responsibility, and I'm looking forward to the next challenge. We are now working with the coaches and I hope that this season will be a continuation of the previous one.

No doubt, the first shutout was a blast for me. It happened at the beginning of the season, but I should admit that it was not solely my job. It was thanks to the team, because the guys played well that game. I hope that next season will have many more brilliant moments like these, many more shutouts. They bring a lot of emotions for the team and the fans.

GK: You host one of the most important preseason tournaments, the Sochi Hockey Open. How did you feel about the team coming out of that week?

MT: The tournament was really great for our team. We had a hard preseason, but it was good to compete against tough teams from the beginning. We won a game against the Russian U20s, and they had many talented players on that squad. But we still have more work to do.

GK: Who is the toughest sniper you face in the KHL?

MT: There are a lot of skillful players and snipers in the league, and each of them can do a good job to destroy you and the game. But I can say that maybe Anton Burdasov from SKA is the toughest one. His shot is really great and he’s tough on the powerplay. He stays in his office with that one-timer. There are players in the KHL whose shots you can read, but not catch. Every team has good players, so I need to prepare for everyone.

GK: What do you think differentiates the Russian style of goaltending?

MT: It’s hard to separate the Russian style of goaltending today, because there are a lot of styles mixing together. Foreign coaches are coming to Russia and their influence is coming into the school. Russian goalies are really good in technique, and that's because they have strong character. Technique is something you can learn, but it’s the character that makes Russian goaltenders special. I played with Ilya Sorokin a lot in CSKA, for example, and I saw how hard he was working—he’s a dedicated, great guy. I am not surprised at his success in the NHL. 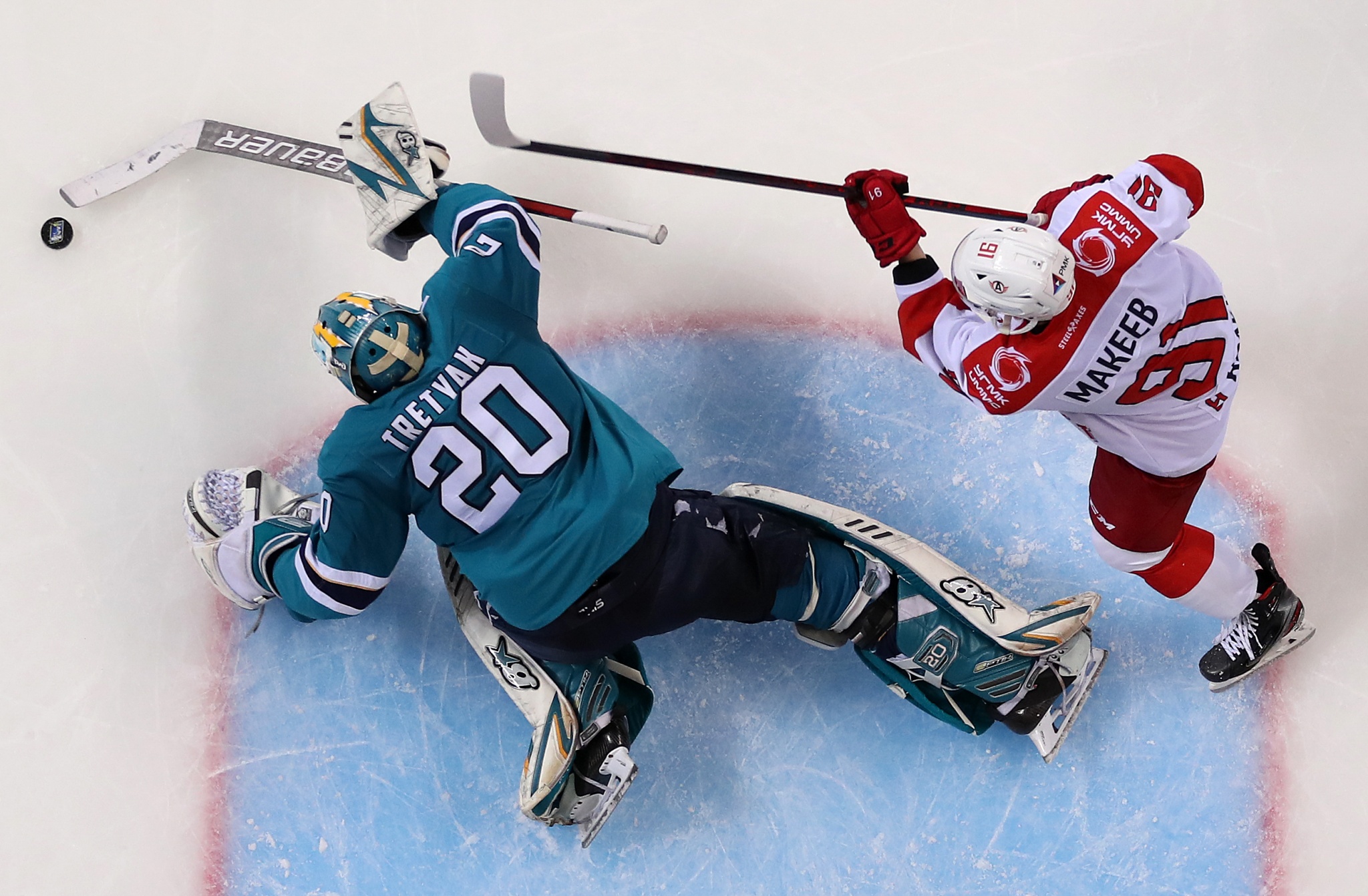 GK: You mentioned Sorokin, and you are now paired with another solid goaltender in Magnus Hellberg. How would you describe that relationship?

MT: First of all, I should admit that it's a stroke of luck for me that we signed such a goalie. Magnus Hellberg is so skillful and professional. He brings a lot of experience, and could help me because we are a good team. For me this season, one of the targets is to get some of his experience because he has had a really brilliant career. I want to take something new from him. Okay, we have a competition, but it's a healthy competition between us. We know that we want to win. We want to help the team, and it's our main mission for the season.

GK: I interviewed Avangard’s Simon Hrubec over the summer, and he said becoming a father made him a better goaltender. It reminded him of life beyond hockey. How has the birth of your daughter impacted your career?

MT: I can agree with him because when you're having your first-born child, it's something very special. It gives you much more responsibility than you had before. You realize that there is something more important beyond the game. I want to develop myself in different ways to become better and better, to give her the best of what I can give right now. It’s a really different level of responsibility.

GK: When and how did you decide to become a goaltender?

MT: I can't really tell you the moment when I decided to become a goalie, but there is a legend inside of my family. The story goes that once I asked my grandfather, "Why do you have all of your teeth?” And he replied, "Because I'm a goalie. I have a mask, and the puck doesn’t hit me." So I said, ”Okay—then I will be a goalie." But I guess what I saw everyday had an impact on me. At our country house, I saw my grandfather’s mask there, his pads, gloves, blockers. They all influenced me, in a way. I should mention that at first, I started playing as a forward—but I didn’t have any real inspiration. It was not my cup of tea. I wanted to stop the puck, not to score.

GK: I am starting to feel like we may see a Tretiak empty-netter. You’ve already nabbed an assist.

MT: No, I only have a dream to stop the puck.

GK: What was your family’s reaction to your decision to follow in your grandfather’s footsteps?

MT: I can’t really remember the reaction because it was so long ago, but I can remember the first time I dressed as a goalie. We went to the rink close to our flat. The one thing I remember is that my parents put my pads on wrong—left pad on right, right pad on left. That was my first practice!

GK: That’s hilarious. Has grandpa offered any particular advice as you assume “the most noble position in sports,” in his own words?

GK: During the pandemic I interviewed a bunch of goalies—including Mike Richter, Bernie Parent, Grant Fuhr, Nikolai Khabibulin. I asked them all the same question: "What is the worst goal you've ever let in, and what did you learn from it?" I want to hear yours.

MT: It’s hard to remember all of the goals because I am trying to keep only good things in my mind! I'm remembering one goal in an away game against Vityaz Podolsk last season. The emotion still lives inside of me because it is fresh, but I am trying to forget about it. After that one, they changed me.

GK: How do you get over moments like that?

MT: I have a really good coach in Sochi. Everything bad that happens, we immediately speak about it. That's how you need to work. All of this stuff happened in the past, but now it's the beginning of a new future. Only you can decide what will go with you, and what you will leave behind. That's a really good mindset, and this is the coach who gave it to me. We are trying to work on this, because you cannot let everything live inside of you. If you just keep thinking about all of the bad stuff, you will live in the past. Let it go. Don’t carry it with you.

GK: What poignant advice for life in general. Are you particularly superstitious?

MT: I have some superstitions, but I'm trying to remove them from myself. Only you can decide how the game will go. If you have a superstition and you don’t fulfill it, you’ll assume that something will go wrong. You need to remember that every day, every game is different.

GK: You’re a busy man, Max. Husband, father, goaltender. Do you have time for any off-ice passions?

GK: Do you actually get in the car and race yourself?

MT: Sometimes—but not on the streets, obviously. Bolshoy Ice Dome is near the [Formula 1] racetrack. My new mask just arrived this morning and it has two cars on it.

MT: I don’t know, maybe my own car. I have a jeep. I’ve driven a lot of good cars, but I can’t say an exact favorite. Cars are really my passion but they’re expensive, so I can’t afford to spend too much money on that. I need to focus on hockey—because without hockey, there will be no cars.