The newbies impressed in Nizhny Novgorod, where Daniel Zaar and Daniel Audette both scored twice in a high-scoring win for Vityaz. Severstal’s Robert Rooba marked his birthday with a debut goal but could not deny SKA a win in Cherepovets. Neftekhimk comfortably beat Kunlun Red Star, and there were victories for Sochi and Spartak.

New signings at the double

This game carried plenty of interest for both sets of fans. The two teams have extensively rebuilt their rosters over the summer, with some intriguing new imports arriving for both. Three of those players responded with doubles for their new clubs. Moreover, with Torpedo back in the Western Conference, this already had the feel of a significant indicator of the relative playoff prospects of these opponents.

Torpedo’s new faces had attracted greater interest over the summer, with some commentators suggesting that Nizhny Novgorod might have recruited some of the stars of the upcoming campaign. However, it was the Vityaz new boys that made the first impact. Canadian forward Daniel Audette didn’t take long to open his account, scoring a power play goal in the sixth minute. Then, midway through the first period, the visitor too a bench minor only to extend its lead thanks to Miro Aaltonen’s shorthanded goal. Aaltonen is no stranger to Vityaz, of course, and the Finn returned to Podolsk this summer after a spell at SKA.

Down by two, Torpedo got the boost it needed from Daniel Zaar, a Swedish forward signed after a strong season in his homeland with Rogle. He opened his KHL account with a goal that put his new club back in the game, then had an assist as Yegor Martynov tied the scores seconds before the intermission. Ivan Chekhovich, back on the team with a permanent contract after last season’s successful loan spell, also had a helper on that play.

Midway through the third, though, Vityaz restored its lead and, once again, there were plenty of new faces involved. Aaltonen combined with fellow Finn Valtteri Kemilainen, a defensive recruit from Tappara, to set up a first goal for Miks Indrasis after joining his latest club.

Zaar underlined his reputation with a second goal of the night to make it 3-3, but that merely sparked Vityaz to up the tempo and deliver a decisive goal flurry. Indrasis restored the visitor’s lead with his second of the game — and barely a minute later Audette also completed a double. That prompted Torpedo to withdraw goalie Pyotr Kochetkov with almost three minutes left, but he spent just seven seconds on the bench before Fyodor Malykhin’s empty netter wrapped up the scoring.

Robert Rooba made a little piece of KHL history when he became the first Estonian player to score a goal in the league. The 28-year-old Tallinn native has played most of his career in Finland, where he helped JVP to win the 2018 Champions Hockey League. His success over there caught the attention of Severstal, who brought him to Russia this summer.

While Rooba was something of an unknown quantity on arrival, he did not take long to introduce himself. Combining on the power play, he took Yegor Rykov’s pass to the top of the circle and zinged in a wrister to tie the game after Kirill Marchenko gave SKA an early lead. It’s Rooba’s birthday today, adding a little more zest to the celebrations. 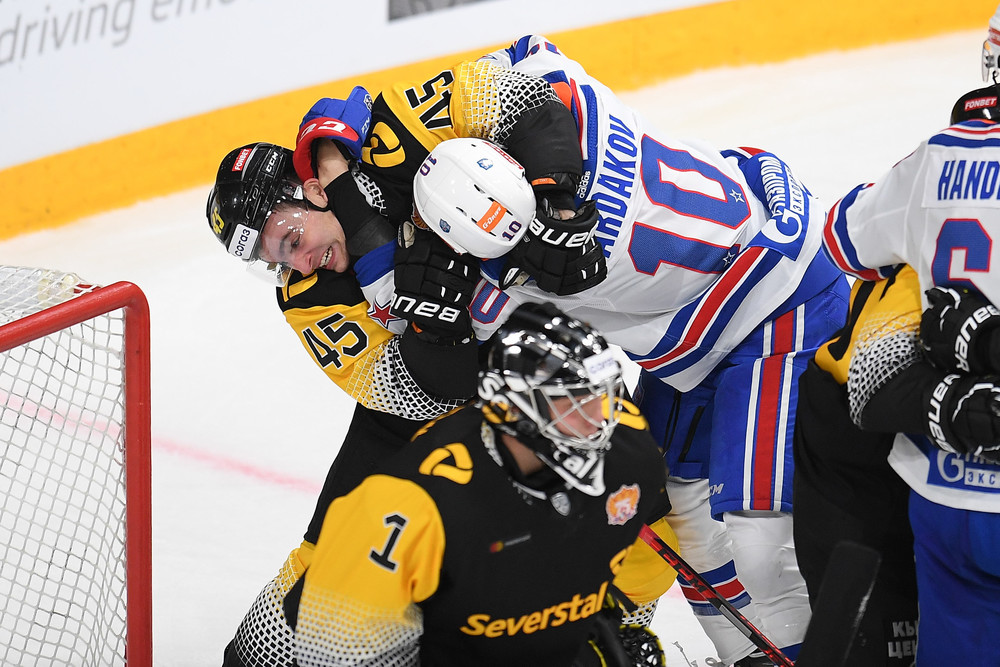 Another KHL newbie, Swedish forward Jakob Stenqvist, also marked his Severstal debut with a goal to put the Steelmen up 2-1. Last week, Severstal beat the Army Men at the Puchkov Tournament and, for a time, it seemed that we might see a repeat. However, Valery Bragin’s team turned it around in the third with a short-handed goal from Fredrik Handemark — another new arrival to the league — tying the scores before Linden Vey potted a late winner.

Today’s game was also notable as the KHL debut for 16-year-old hot shot Matvei Michkov. The youngster had plenty of ice time — 13:15 minutes all told — and fired in four shots at Konstantin Shostak. His best chance came in a one-on-one in the second period, but he was denied by a good save from the goalie.

Neftekhimik began its season with a comfortable home victory over a Kunlun Red Star that continues to promote the cause of Chinese talent ahead of the upcoming Olympics in Beijing.

The Dragons looked competitive early in the game with a roster entirely comprised of players eligible to go to the Games — a combination of Chinese-born, Chinese heritage and potentially naturalized representatives. However, after falling behind late in the first period to Alexei Puzanov’s first ever KHL goal, the visitor’s evening took a rapid turn for the worse.

Influential defenseman Jake Chelios was ejected from the game after a clash with Pavel Poryadin and that major penalty brought goals either side of the first intermission. Captain Marat Khairullin made it 2-0 just before the break then, on a 5-on-3 power play, Rafael Bikmullin added a third. The home power play was hot, but the officials denied it a fourth goal midway through the frame when Ronald Knot’s point shot was whistled down on a coach’s challenge. Interference on Red Star goalie Jeremy Smith was the verdict.

The Dragons took some respite from that small victory and kept the scoreline unchanged until late in the game when Spencer Foo scored a consolation goal. However, that sparked the home team into life once more, with Poryadin adding a fourth before Dan Sexton marked his second Neftekhimik debut with an empty net goal to seal a comfortable success.

Sochi made a fast start to its season, scoring two goals in the first seven minutes to take control of its opening game against Amur.

Summer signing Artyom Nikolayev opened the scoring on 3:55. The 22-year-old was previously with SKA, but managed just 20 appearances in three seasons on the fringes of the Army Men’s roster and did not manage a goal in that time. A new environment might prove to be just the stimulus he needs.

Next, former Severstal man Denis Vikharev got his first goal for his new club, striking on the power play to double that lead on 6:28. Like Nikolayev, he could use a fresh start. After impressing with Admiral, the 29-year-old saw his productivity drop in Cherepovets last term.

Midway through the second period Kirill Pilipenko became the third home player to score on his Sochi debut. It’s a fifth career goal for the 24-year-old, who previously played for Dynamo Moscow and Admiral, but did not feature in the KHL at all last season. Pilipenko also had an assist on Sochi’s fourth goal, scored by Slovak forward Martin Bakos midway through the third period.

It wasn’t just up front that Sochi unveiled new signings. Today’s game was also a debut for goalie Magnus Hellberg, arriving from SKA. He got the win and made 36 saves for the shut-out, but was helped by two video reviews that denied Amur a way back into the game.

Admiral struggles on return to the league

Admiral returned to KHL action on the road in Moscow, but found Spartak was unwilling to provide a gentle return to the competition as it moved into its new home at the Megasport Arena.

True, the Sailors — featuring a roster hastily assembled this summer — kept pace with the Red-and-Whites during a goalless first period. But early in the second, Alexander Khokhlachyov gave the home team the lead and midway through the frame Emil Pettersson scored on the power play to double that lead. It was the Swede’s first goal in the KHL and it went a long way towards securing a win for Boris Mironov in his first competitive game in charge of the team. 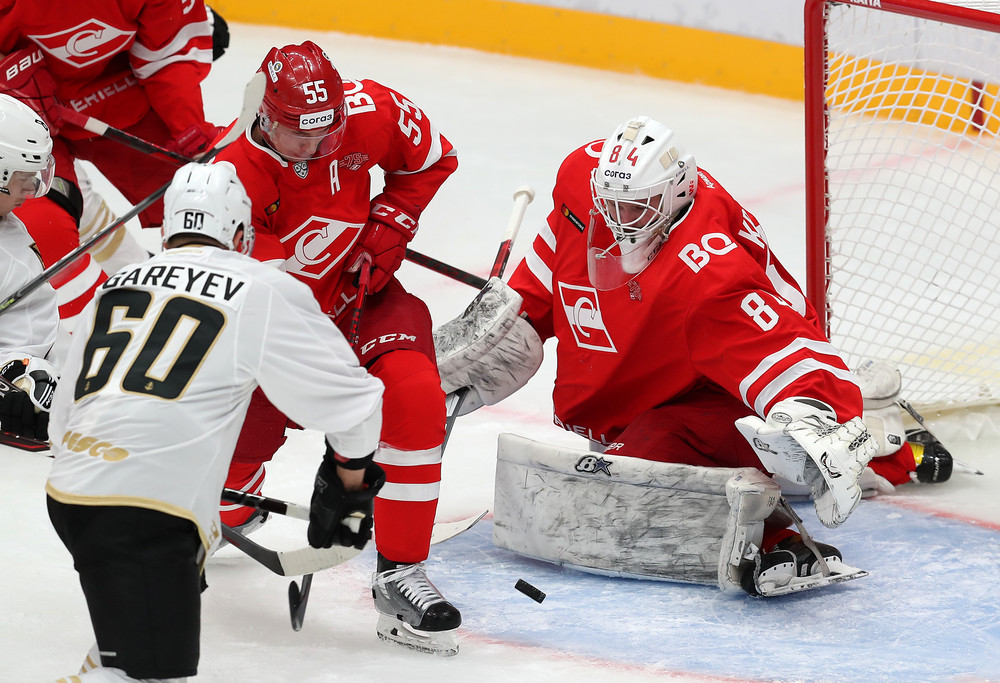 That victory was sealed midway through the third when two goals in a little over a minute left Admiral holed below the water line. Jori Lehtera made it 3-0, then a power play saw the Finn set up Tim Heed for his first marker in the KHL. Home goalie Alexei Krasikov made a winning start to life in Moscow after a difficult time last season with Sochi and Sibir. However, he was denied a shut-out when summer signing Rihards Bukarts scored late on — Admiral’s first KHL goal since Feb. 26, 2020.