Recovering from cancer: Murygin talks about his battle with serious illness

Over the past couple of years, many fans might have forgotten about Alexei Murygin — even though it’s not that long that he was setting shut-out records with Lokomotiv. However, on Jan. 24, 2019, the goalie played his last game for hometown team Amur ... and nothing more was heard. Worrying rumors began to circulate, but it wasn’t until last fall that the man himself decided to break his silence and explain that he had been battling against a serious illness. The experienced netminder was diagnosed with a throat cancer — specifically a squamous cell carcinoma of the tonsils. Happily, Alexei overcame that serious illness, followed a long rehabilitation program and, on May 1 this year, agreed a try-out deal with Torpedo. That trial was a success, and Murygin went on to sign a full contract.

‘My family and kids are great, but hockey is my second family and I was deprived of it.’

There were three months from agreeing a try-out to signing a full contract with Torpedo. How long was the trial in reality?

We came together in the middle of July, so it was about a month.

For an experienced player like yourself, a try-out must have been an unusual experience?

Of course. I don’t even remember having a try-out before. Of course it’s unusual. By in my circumstances, it’s all for the best. In the situation in which I found myself, it was important for me to know if it was worth trying to return to the game. Did I have the strength, the enthusiasm, the physical fitness?

And what were your first thoughts after your comeback?

As soon as I went into the locker room at Torpedo, I immediately realized how much I’d missed that atmosphere. I’d be away for two years. Family and kids are great, but hockey is a whole other life. It’s a second family, that I was deprived of.

It was so emotional. So many different feelings, both positive and negative. On the one hand, I’d forgotten some moves, I’d lost my instincts. From a professional point of view, it was tough. But emotionally, I was on top of the world. It just grabbed me. Everything was exciting: a new team, a new city. I’m starting over.

When you went out to play against Dynamo, was it one of the most exciting moments of your life?

It would be a bit of an exaggeration to say that. Most of all, that game was an emotional and physical test for me. It was hard to prepare myself for the start of the game. I was thinking a lot, worrying about what I had to remember on the ice. And I wondered how my body would cope.

And how did it match with your expectations?

I think I did alright. After two or three minutes I calmed down and started enjoying the game. The preparations were the hardest part. 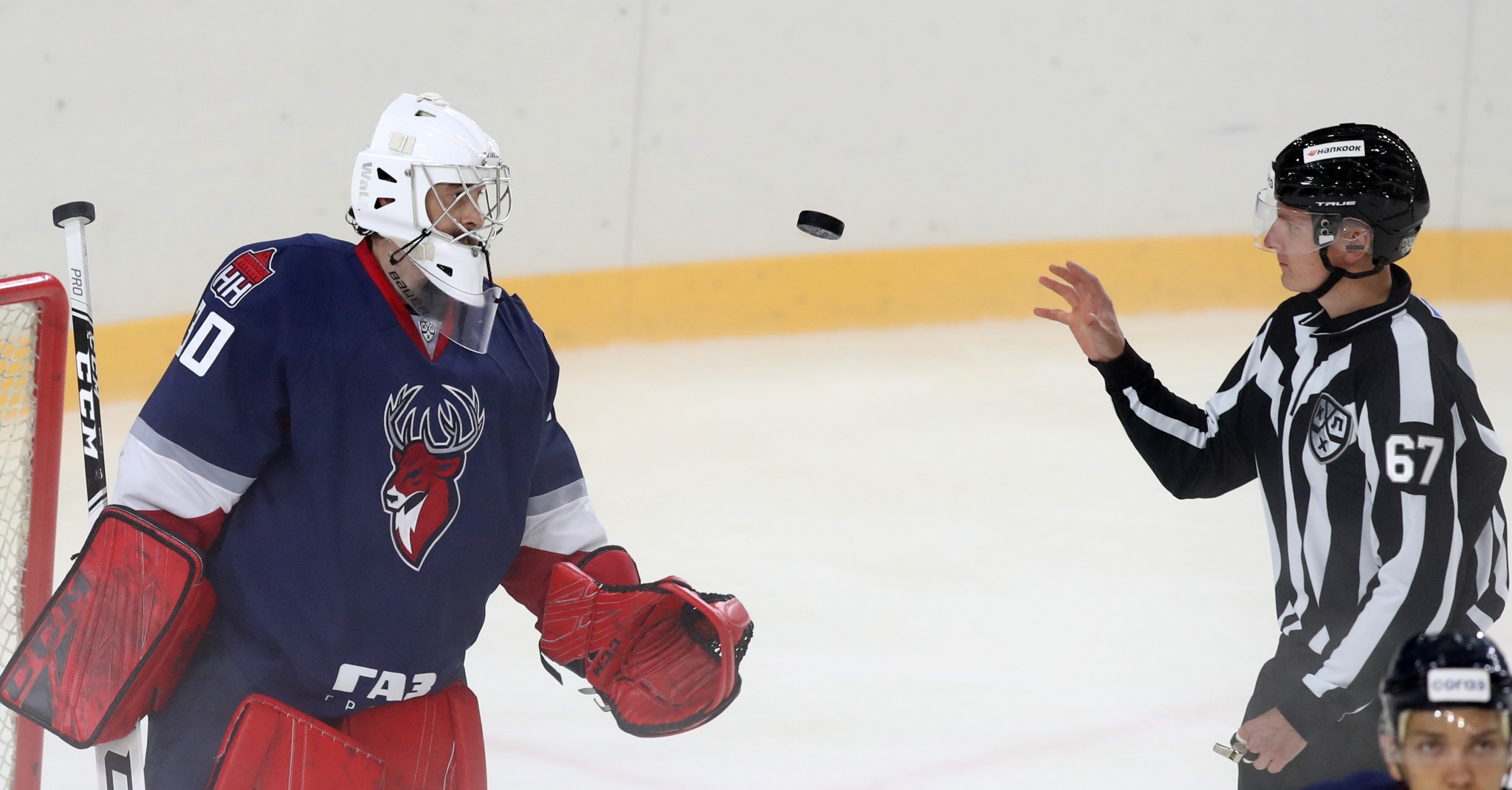 ‘I wanted to find a team before New Year, but when the deadline came around I was only just starting to swallow food normally’

Did you have any doubts that you would return to hockey?

I definitely thought about retiring. Two years out is a long time. It’s hard to come back at my age. After my illness, I worked out in the gym and on the ice, but you can’t really train by yourself. When I got an offer from Torpedo, I agreed immediately. There were doubts about whether I could pull it off. But thanks to our coaching program, I gradually got on board with it. It was a good boost for my body.

Did you think about returning to hockey at a lower level than the KHL?

The KHL is a really high level and I’m trying to get up to that. To be honest, I didn’t want to go to the VHL, nor to Europe. I’ve never had much enthusiasm for playing overseas. I was focussed purely on a return to the KHL. Right now, I feel like I’m ready to play at about 70% of my level. But I think pretty soon I’ll finally be back to normal. Those instincts and reflexes are already coming back.

Did you play any rec hockey?

In the first year of rehab, I wasn’t up to going on the ice or going to the gym. I was happy if I could climb to the seventh or eighth floor without getting out of breath. In six weeks, I lost 20 kilos: I had no bulk, no muscle. I was hard for me to lift a 15-kilo bag. So, at the start, I could only do physio. Squats, jumps, working with 5kg dumbbells. At the time I was in Yaroslavl. I’m grateful to everyone who worked with me. Gradually the muscle came back and I realized that I was still drawn to hockey. Sometimes, even in my dreams, I was playing. It’s hard when you spend your whole life on the ice and then suddenly you’re cut off from your work and your favorite pastime. In the second year, I started training. I skated with some of the veteran players in Yaroslavl, then in spring I went to my parents in Khabarovsk where I continued training with young players.

I went to a goalie camp in Moscow. It was hard work for me, there was lots of work with the puck. Then, at the start of pre-season, I headed to Nizhny Novgorod. And now I feel much better, even compared with two months earlier.

You said that you couldn’t even lift a bag. How much of a blow to your self-esteem was that, as a man and a pro athlete?

It was tough. The doctors reassured me that sooner or later I would get better, get back to my old shape. I wanted to get back into sport and feeling so weak just spurred me on. Lifting more than my wife was a big motivation for me.

When you were recovering in Yaroslavl, where you played your best seasons, was that a help or a hindrance? The guys were playing in the arena, and you weren’t with them.

To be honest, I avoided the arena. I didn’t want to be recognized by hockey fans, I didn’t want a lot of questions. I tried to avoid that issue. Believe me, it’s no fun to keep talking about what happened to me over these past two years. I know lots of the guys at Lokomotiv, and I’m not gonna lie, I was rooting for them, for the team. When I watched the guys, I dreamed of recovering faster.

Did the doctors advise you to end your pro career?

No, there was never any conversation about that. Everybody recovers in his own time. In June 2019 I finished my treatment, and I was hoping that I’d sign a contract somewhere by New Year. But when the deadline came around, I was only just starting to swallow food normally. The mucous membrane in my throat wouldn’t let me do it. Everything was swollen and scarred. So I set myself the task of recovering by the summer, getting back into sporting shape. In my first year, I only regained four kilos.

How close are you to your fighting weight now?

And how does that affect your game?

At my current weight of 80 kilos, it’s easier to move around the crease. It makes a few things easier. Although I wouldn’t say it’s difficult for me to get down or jump back up again. 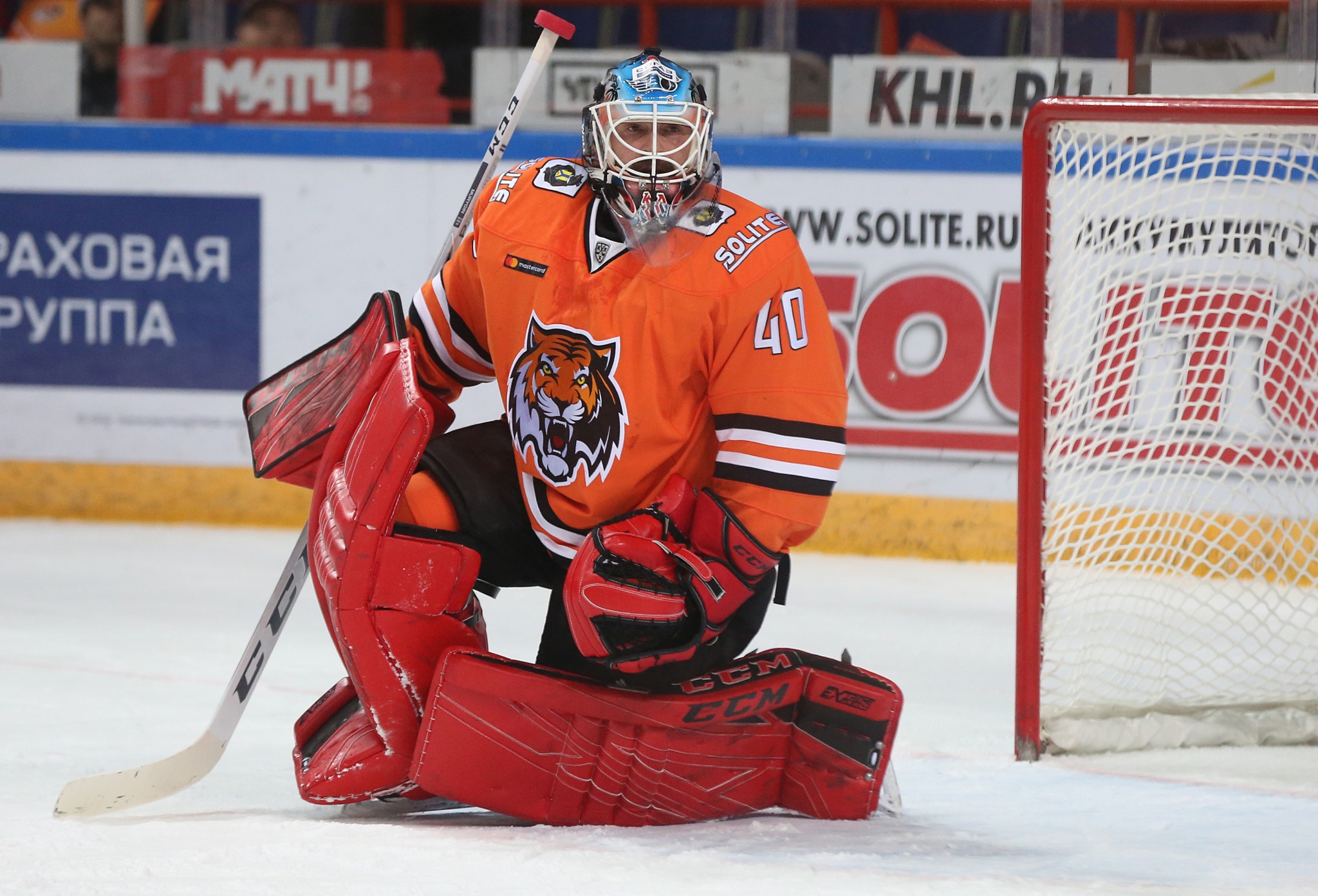 During this time, do you feel that you made new friends, or lost old ones?

I don’t think I lost anyone. It’s just that sometimes I had less contact with people. When my friends and acquaintances knew I was ill, I received a lot of messages of support. I’m grateful to everyone! When Torpedo offered a try-out, lots of people congratulated me on moving back into sports, and when I signed a full contract there was even more encouragement. People called me, wrote to my wife on social media. I’d have to admit that the first day after signing the contract was pretty emotional.

So it seems that the ‘hockey family’ isn’t a myth?

Absolutely not. The other day there was a charity game organized by Artemy Panarin. I think things like that say a lot. It’s good when we can help a person in need.

Apart from Torpedo, were there other clubs who helped you?

Last season there were talks about the VHL. However, it never got as far as a concrete proposal. Torpedo is the only club that reached out a hand to help me stay in hockey. Time passes, and if I hadn’t signed a contract by now, I’d have to end my pro career. I’m grateful to the management and coaches in Nizhny Novgorod. I’ll do everything I can not to let them down.

It’s clear what Torpedo offers to you. Did they explain why the club needs you? There’s not much room for sentiment in pro sports.

We’ve got a really strong goaltending group at Torpedo! Tikhomirov and Kochetkov are young guys who are fun to work with. With my experience, I can help them in the locker room. They told me straight: I’m coming as the third goalie and we’ll see how it goes. I don’t want to jinx anything. 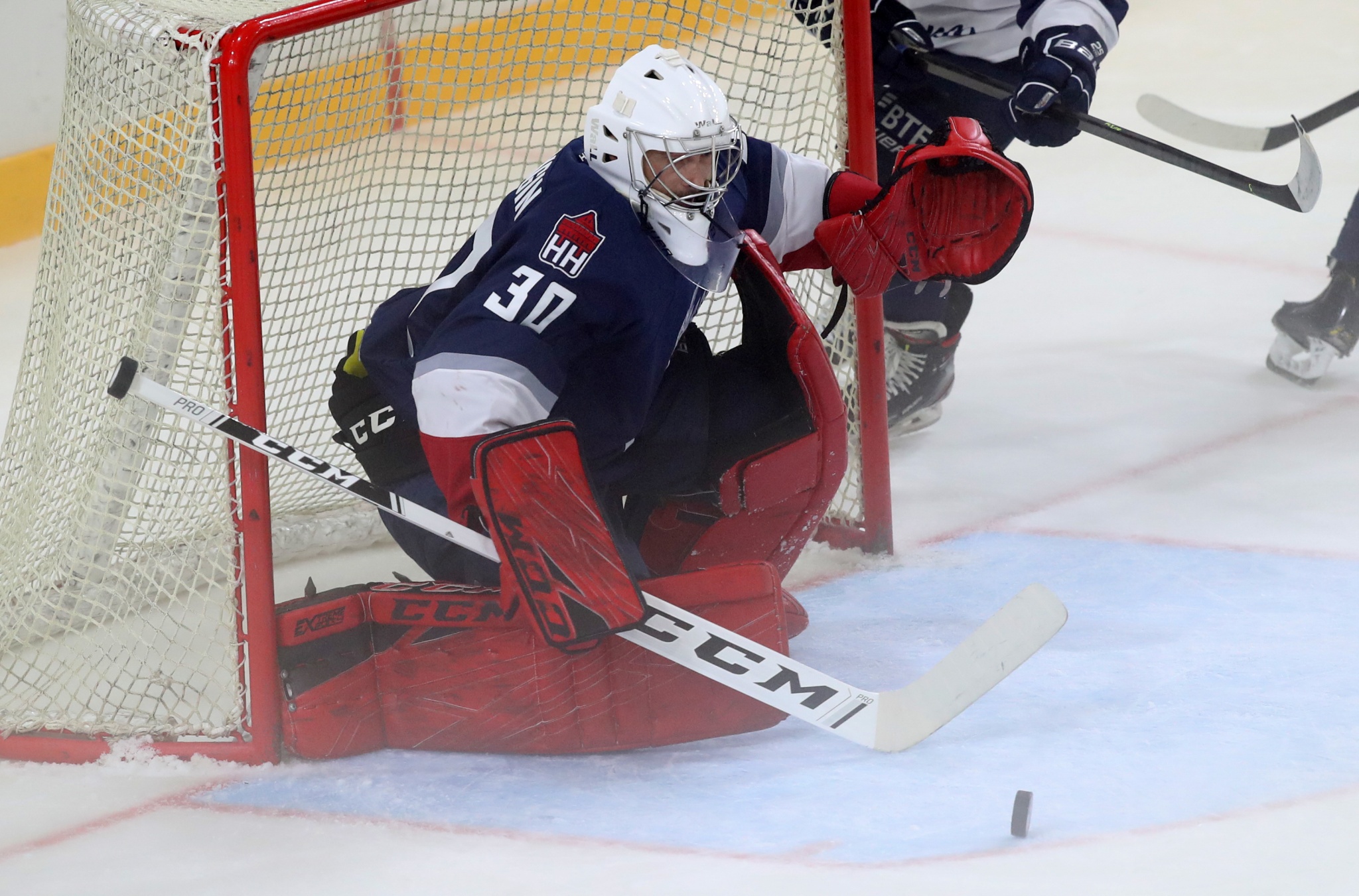 ‘There are many good and kind people around. They were even trying to help me.’

I’ve heard many stories of families that split up when somebody suffers a serious illness. How was it with you?

First, I have to say a big ‘thank you’ to my wife. She did a huge amount of work at home. We have three children and, at first, we kept my illness from that. Organizing the treatment, the travel, our home life — all of that fell on my wife. The first three months she was a huge help to me. The situation brought us closer together. Now we can smile at any minor problem or disagreement. So everything is good with our family.

During this time, you probably felt more like a father than ever.

Without a doubt! [laughs]. I realized that looking after kids is incredibly hard. It’s one thing when you’re away from 10 days: everyone misses you and rushes to hug you. But when you’re plunged headlong into family life, it’s very different. The kids are full of questions, you need to talk with them, get up to speed with their lives. Gradually, I could join in, although sometimes my wife and I would argue about what I was bringing to the family. After all, she had always been the one to bring up the kids, and suddenly dad was at home every day.

To overcome a serious injury, is it essential to stay optimistic?

I think so, yes. You have to keep your spirits up, whatever happens. If you start thinking your time is up, nothing good will come. Your body relies on your mind, and the thoughts in your head. Nothing gets better with negativity. It’s the same on the ice, if you go out smiling, or sulking.

Has your story prompted you to do more for charities, perhaps to help people who find themselves in a similar position to you?

Even before my illness, my wife sent donations to various funds. We would sit down and discuss the budget, allocate certain amounts. So we are already involved in this a bit. There are lots of kind people around, more than you’d think. They were even trying to help me, but I refused. Fortunately, we had the funds for my treatment. But not everyone has that chance. People should not be shy to ask for help. There are kind people who will come to your aid, and that’s even more true within the hockey family. 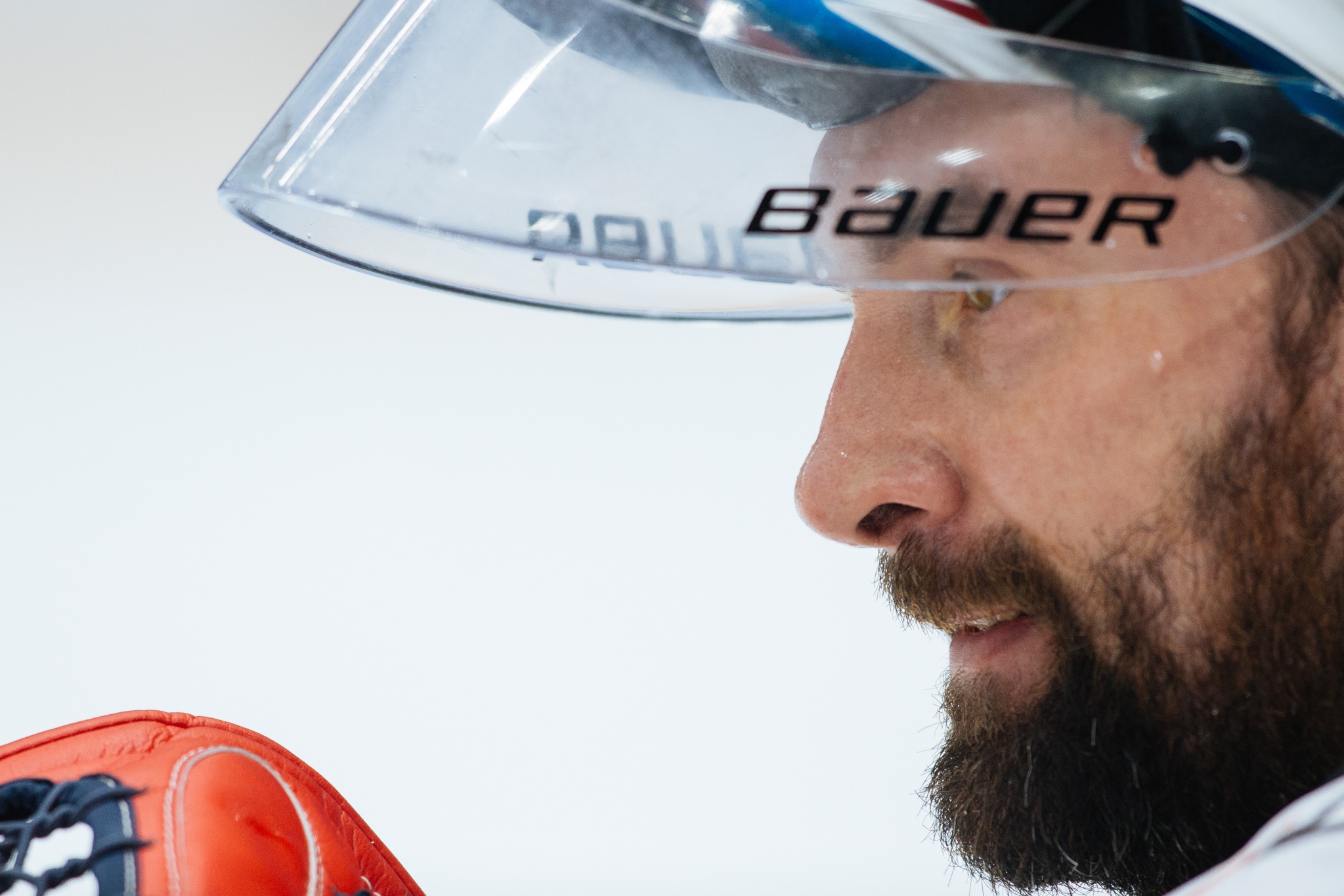