In late May, Denmark delivered its first-ever victory over Sweden at the IIHF World Championship. It was a milestone almost exclusively achieved by Jokerit forward Nicklas Jensen, who registered a hat trick and an assist to seal the upset. His breathtaking performance impressed even the toughest of coaches, a Toronto-born import to Herning in the 1990s. His name is Dan Jensen, but he’s better known as dad.

“In moments like that, it's pretty cool to have a dad that's into it and has been a part of it your whole life,” Jensen shared from Jokerit training camp this week. “To be able to call him and my mom after it—that was pretty special. I think for that game, he was a fan.”

Jensen began his career with Herning Blue Fox, the most successful club in the history of Danish hockey. He moved to the OHL to further his development with the Oshawa Generals, and was drafted twenty-ninth overall by the Vancouver Canucks in 2011. He logged NHL minutes with Vancouver and the New York Rangers between extended stints in the AHL, opting to relocate his career to Finland in 2017. He was among Jokerit’s top scorers in the unprecedented 2020-21 season, and was rewarded with a spot in the leadership group for the upcoming campaign.

I chatted with Jensen about club and country from Helsinki, where the team prepares for the upcoming Bauer Games, a preseason tournament hosted in Imatra, Finland.

Gillian Kemmerer (GK): Among all of the teams in the KHL, Jokerit had one of the most trying seasons in terms of the pandemic. Do you feel like you are back on track?

Nicklas Jensen (NJ): Yes, last year was a different season—especially for us playing outside of Russia. The quarantines and the breaks were very difficult. Hopefully, it will go a little bit smoother this year. So far everything's felt normal, but you can still tell that the rules are different in Finland than in Russia. Right now though, it's not that bad. I haven't heard anything about fans yet, which is obviously something that as players, we are really hoping the stadium is full again once the season starts.

As of now, the most important thing is that the quarantine rules have gotten less strict. If you were exposed last year, you automatically went into fourteen days of quarantine. That hit us, I think, four times last year—which was tough on our team.

GK: You relocated to a small city this week to dial in on training. Take us through the average day.

NJ: We have an 8:15 wake up call, breakfast and then straight to the rink. We do our workouts before the morning skate. After that, we come back and have lunch. We had cottages set up with eight guys in each cottage, which was nice. Then we go back in the evening, around 4:30, for another skate. It has been a tough week, but also a good time.

GK: That’s quite a schedule after the summer! You must have been sore.

NJ: We unfortunately don't have ice in the summer in Denmark, so there's no skating. It doesn’t really matter what you do, though. You always get sore and feel stiff in your body after a couple of weeks, but I’m already feeling pretty good. The first two weeks were pretty intense with double skates almost every day, but now it’s preseason with exhibition games, so it's not going to be so bad.

GK: When I spoke with head coach Lauri Marjamaki at the end of last season, he mentioned that Jokerit intended to get a bit younger. I can see that the average age of your roster trended downward from 29 to 26. How do you like the recomposition of the team?

NJ: You can already tell from the outside that they wanted to go a little younger. The new guys we've gotten in, they look great and are great guys. I think we've added some energy and also first-timers in the KHL. They're excited, and you can see the excitement in the group, which is great. Most of the training right now has just been skating. Hopefully, the connection starts developing when we start playing some games.

GK: Last season was about perseverance. With more normal circumstances in place now, what is the goal for the upcoming year?

NJ: If you look at our history with Jokerit, we've always had a pretty good team and done well in the regular season. But come playoffs, it has been tough for us. My four years here now, we've gone to the second round as the furthest. Our mindset is that we want to be a team that peaks at the end of the season and is ready for playoffs. We want to do more than what we've been doing.

Obviously, there's a long wait to the playoffs, but that buildup starts now with good preparation and coming off of a good start. Once Christmas hits, you want to be in a good spot, feeling good and then digging in before playoffs. Our main focus is having a run at the Gagarin Cup, and not being satisfied with winning one or two rounds. We want to go all the way. We'll see what happens, but that's what we're prepping for now— a good start to the regular season.

GK: Something I find quite funny is that you’ve played Lokomotiv Yaroslavl twenty times in the past two seasons. Do you enjoy that matchup?

NJ: Well, not last year—but the year before it was more fun! Before COVID hit, we had a really good run going on there, but of course, it's always fun to play Loko. It has become a rivalry just because of how many games we’ve played against them, back-to-back playoff series. They have a really good team and they've also gotten younger. They had a super team last year and we had a tough time. Obviously no excuses, but with COVID and everything, we had to play all of the games in Russia with no home games. It was difficult for us. Hopefully this year is more normal, so we can play our home games and have our fans. That's going to be a huge help.

GK: I want to rewind to the World Championships, where you had that phenomenal hat trick and assist against Sweden. How do you look back on that tournament overall?

NJ: That first game was obviously a crazy game, and not one you're going to forget. I don't even think we've ever taken a point from Sweden before the exhibition game right before Worlds. It was the first time. Winning that game against Sweden was special, and that gave us huge belief in our group. We didn't have every player we could have had on the team, but the way we performed, it was a special tournament. Obviously, we would have liked to qualify for the quarters, but it's still a tournament I'm proud of. We beat some good teams and we had great performances pretty much throughout the whole tournament. That was a good memory for all of Denmark. 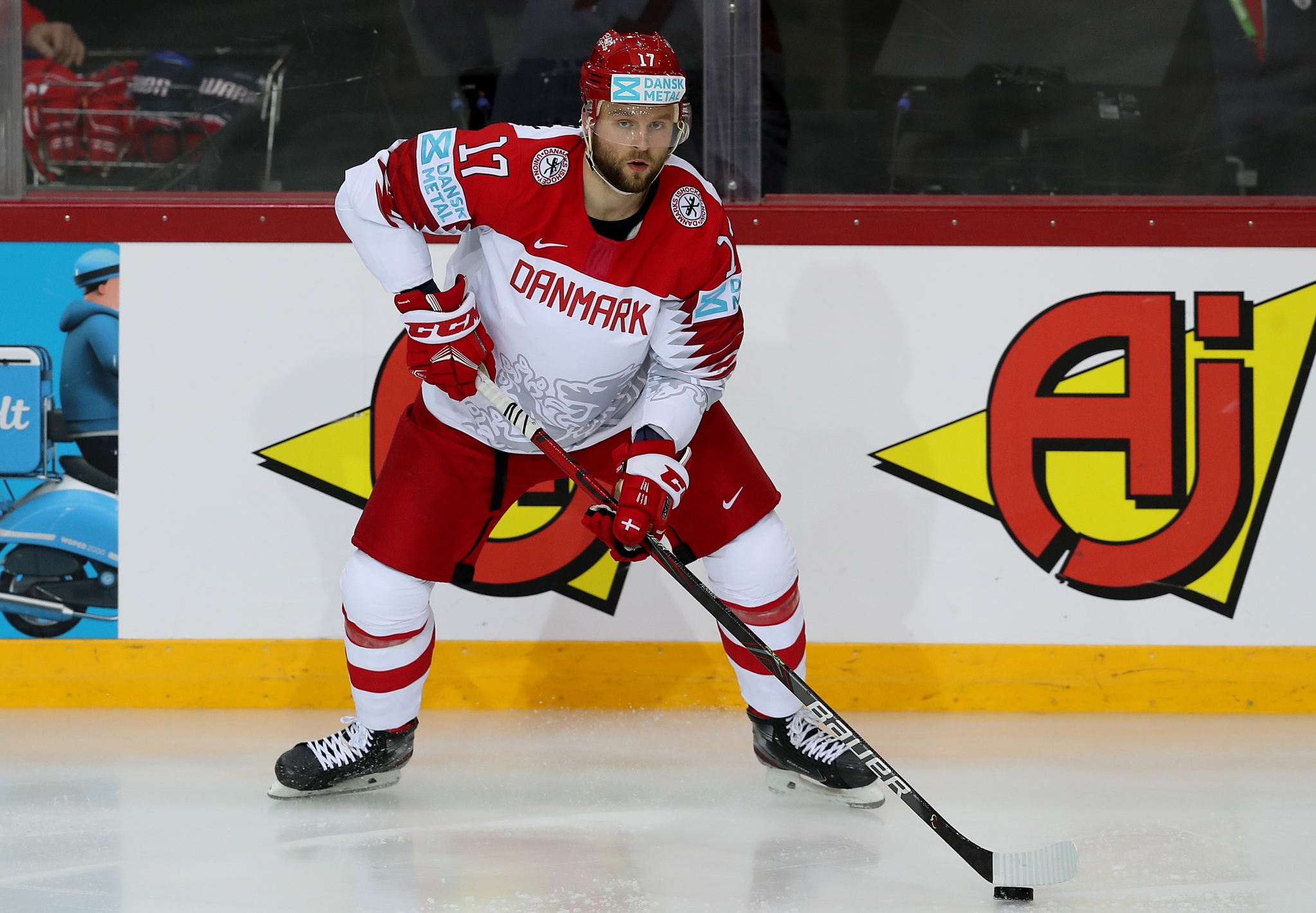 GK: How would you say that hockey has progressed in Denmark since you were a kid?

NJ: I think that hockey has gotten more popular and more kids are trying out the sport. I think that comes from a lot of players having success in Denmark, and especially outside of Denmark in Europe and in the NHL now too. For younger kids, they see us and the guys in the NHL on TV, and they know that it's actually possible. I'm lucky to come from Herning, which is quite a big sports city. There are only so many teams in Denmark, so it's easy to be born somewhere where there's no hockey.

GK: Your father played professionally, and now he coaches Herning. Your brother is on the team. Was there ever a question that the Jensen brothers would be hockey players?

NJ: My dad's originally from Canada, Toronto, and came to Denmark in his early twenties. Hockey has been there for as long as I can remember. Growing up, we went to the rink and saw my dad play and skated with him after games. It has always been hockey. We tried out soccer and all of that, but once we got to an age where you had to pick one or the other sport seriously, it was hockey all the time.

GK: Does your dad still coach you, in a sense?

NJ: He used to be my coach in junior hockey. Now he's coaching my brother in the pro league in Denmark, which is pretty cool. He for sure has a huge input. He's probably the biggest reason for where my brother and I are today. It's because of him. He's obviously a fan and enjoys it, but most of the time, he's a coach.

GK: Like most of us, he was probably in the fan camp during your spectacular performance at Worlds.

NJ: In moments like that, it's pretty cool to have a dad that's into it and has been a part of it your whole life. To be able to call him and my mom after it—that was pretty special. I think for that game, he was a fan.

GK: How have you enjoyed exploring Russia as part of the KHL? Was there a particular place that you wanted to see most?

NJ: Before I started, I thought visiting Moscow and St Petersburg—the big cities—was going to be cool, but I actually love playing all the way out in Siberia in the more Russian cities with their local rinks, not as fancy as the Moscow arenas. You can see that the fans are really into it. You can really see that it's a hockey country.

GK: Do you have a favorite rival or opponent?

NJ: I do love the big games when we play CSKA Moscow or St. Petersburg, Loko. It's a generally tough league to play in. Even before I came to Jokerit, they played the outdoor game against St. Petersburg—and now it’s always a big game when we meet those guys. It's fun to play against the top end of the league, for sure.

GK: What’s the funniest prank that you've witnessed in a locker room?

NJ: In juniors, we did a lot of pranks. I played in the OHL. We were just a bunch of kids acting like we were pros, which was a lot of fun. We had a veteran guy that stole our rookie’s jeans before practice. He put them in cold water and then put them in the freezer. I thought that was pretty funny that he had frozen jeans after practice. Stuff like that.

NJ: Maybe I should pull off that prank soon.

GK: I think so. What is your go-to hype song before a game?

GK: Looking back on your hockey career someday, what will have constituted success for you?

NJ: Obviously, I'm proud of where I am today, but I would really love to win a title. That would be the top of it. That's also why I love that I'm staying here in Jokerit. I think we're moving in a direction where we're getting more competitive, and you can really tell that the organization is here to win a cup. Other than that, looking back at having a shot at the NHL and playing there was awesome. 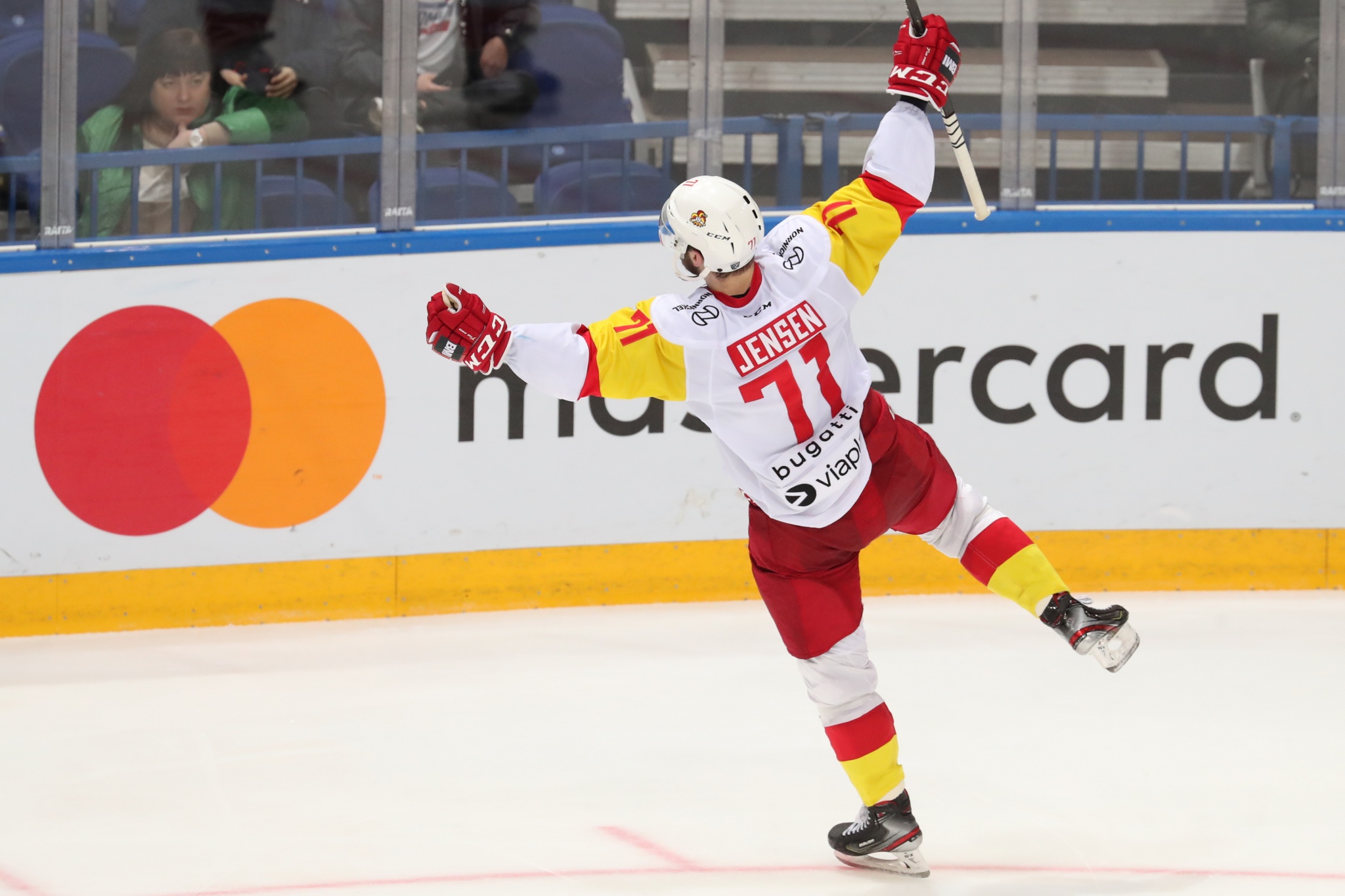