You could hardly say that “everyone and their mother” is an Olympian—but in the Vafina household, this is exactly the case. When Dynamo-Neva forward Alexandra (Sasha) Vafina represented Russia at the 2010 Vancouver Games, she bore the literal and figurative torch from her mother Lyubov, who represented Kazakhstan in their first Olympic appearance in 2002. The mother-daughter pair even played together in Chelyabinsk for a time, an opportunity whose singularity only became clear later.

At that time, I feel like I didn't fully understand how unique it was,” Vafina shared from Novogorsk, where she is preparing for the upcoming Women’s World Championships in Calgary. “Not everyone gets to play professional sports with their parents. Looking back at it now, I perceive how incredible those years were, and it was really fun.”

Sasha Vafina began her hockey career in Kazakhstan, where she played on a boys’ team until a viable women’s option became available—a team coached by none other than her mother. The family then relocated to Chelyabinsk, where Vafina played for Fakel (resurrected and rebranded this season as Belye Medveditsy). She departed for North America to play NCAA Division I at the University of Minnesota-Duluth, later transferring to the University of Calgary. She won the Russian Championship with Agidel Ufa in 2018, logging time with SKIF Nizhny Novgorod, Gorny and the KRS Shenzhen Vanke Rays en route to Dynamo-Neva this season.

I caught up with the second-generation Olympian as she prepares to make a run at the Beijing 2022 Winter Games. We discussed her hockey heritage, off-ice passions and more.

Gillian Kemmerer (GK): When I saw that Chelyabinsk—your former home—added a WHL team this season, I was expecting you to be the first signing! Instead, you are heading to Dynamo-Neva in Saint Petersburg. How did you decide on that opportunity?

Sasha Vafina (SV): The offer came up from Saint Petersburg [Dynamo-Neva], and I used to play there for [Gorny] the year before the Vanke Rays. I was really excited about this offer because I liked the city and I liked the team that Dynamo had last year and for the upcoming season. I was really happy to sign with them, to play in Saint Petersburg, and to be around this team and coaching staff. It's really motivational, and that's what I was looking for—especially for this season, because we are heading into the Olympics. Regarding the Chelyabinsk team, I was really excited that my kind of home city came back and brought life to the team, which hasn’t existed for four or five years.

GK: You once played alongside your mother in Chelyabinsk, who was also a professional hockey player. Was she the main inspiration for your career?

SV: She was the main reason why I started to play hockey, that's for sure. I started playing hockey when we lived in Kazakhstan, and then we moved to Russia and there was a professional team. I was young and the age range out there was really broad, so I got a chance to play with my mom. That was pretty funny! At that time, I feel like I didn't fully understand how unique it was. Not everyone gets to play professional sports with their parents. Looking back at it now, I perceive how incredible those years were, and it was really fun.

GK: I think we should probably note that your mother is a fellow Olympian!

SV: My mom played in Salt Lake City in 2002 for Kazakhstan. That was the first time Team Kazakhstan made it to the Olympic Games. It was a big moment for my mom.

GK: How special it must have been for her when you were named to the 2010 Olympic Team. Did she offer any suggestions on how to take it all in?

SV: She explained a lot of things to me—how the Olympic Village looked, how all of the athletes live together. How exciting it is. She gave me a pep-talk before I got to see how it worked for myself. I remember my mom told me a bunch of stories about how cool it was. 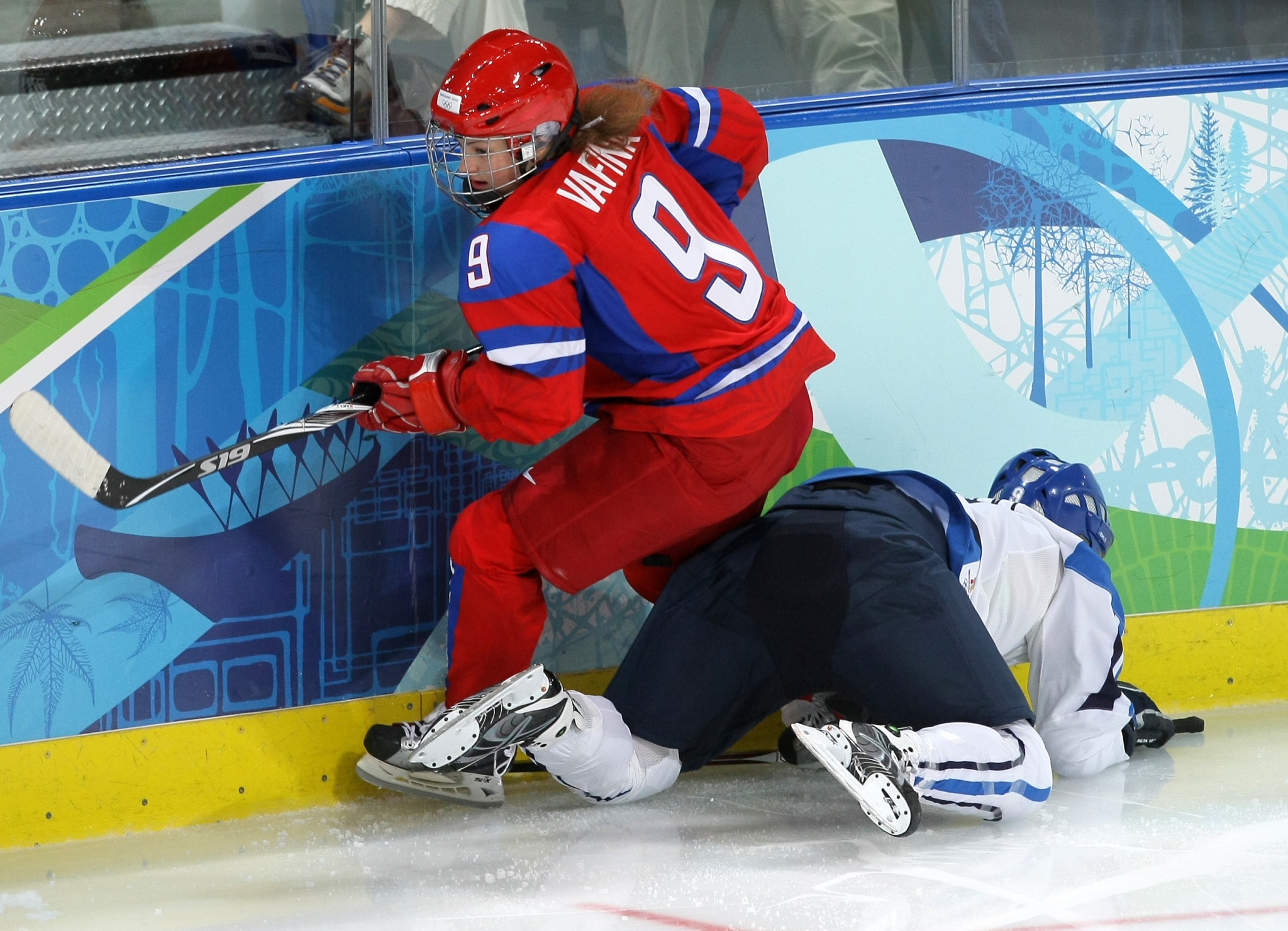 GK: You are in the athlete city of Novogorsk preparing for Worlds. What is the average day at National Team camp?

SV: Everyday I wake up and go to breakfast, and then we have two separate groups because there are about 30 players here. The first group goes on the ice for one hour while the second group goes to the gym, and then we switch. It’s two practices in the morning, then lunch and downtime. For evening practice, we usually come together as a team. It's about 30 minutes on-ice practice and sometimes we have a team meeting. We discuss our previous games, our powerplay, our PK, how are we going to play against other teams. After ice practice in the evening, we go to dinner, and then there is free time for recovery. That’s a normal day at the national camp.

GK: Are the Beijing 2022 Winter Games a target for you?

SV: Yeah, for sure. I never had the chance to medal at the Olympics, so it's a goal for me to go there and compete and try my best. But before that, we have a World Championship coming up, where we have to show up as a strong group of women and compete for Russia. It’s step-by-step building toward the Olympics.

GK: Last season, you had an interesting experience. You competed for the KRS Shenzhen Vanke Rays, even though the pandemic prevented the team from returning home to China. How would you describe that season?

SV: It was a really great experience. As I'm talking, I'm smiling all of the time because it was so great. I got to know an incredible group of people, coaching staff and administration staff. There were many girls from Europe, from North America, from China—all that variety came together as a team. It was just an amazing, amazing experience. I learned a lot from them, and it was really eye-opening how things could be done better. I saw a great level of women's ice hockey, which really inspired me. I think that every girl who plays a professional sport—no matter what kind—deserves that kind of environment.

GK: You’ve played for both the Vanke Rays and Agidel Ufa. These teams are meeting once again in the finals, which were postponed due to COVID. You will not be playing for Shenzhen, and several other key stars will be gone due to National Team duties. Do you have any predictions?

SV: It was really upsetting for us that right before we were meant to fly, our final games were canceled or postponed. No one knew what it was going to look like, and it was really upsetting that after playing the whole season, we were not going to compete as a team as it was supposed to be. I really hope that the Vanke Rays will defend their championship, even though I’ve played for both of those teams. I'm just wishing them the best of luck because they all deserve it. The way that they came into our Russian league and brought so much diversity, experience and growth—it’s amazing. I'm really glad that they joined our league.

GK: Would you say that the WHL’s competitive parity is increasing over time?

SV: It’s step-by-step, year-by-year and season-by-season. The level of women's hockey is growing in Russia, and I really hope we will grow even more. People like to watch women's hockey and they are paying more attention than in previous years, which is great. That's what we need, for sure. I feel like the participation of the Chinese team brought more experience, and they brought Russian women's hockey even higher.

GK: You already hinted at it, but do you think that public perception of women’s hockey is becoming more favorable in Russia?

SV: They are accepting it a little bit more than a year or couple of years before, but still not in the way we would like to see it. I would say in North America, there's no such stigma as “women don't play hockey, women don't play men's sports.” But in Russia, there's still a strong stigma about that kind of thing. I wouldn't say everyone is on that page, but outside of big cities, people look at women's hockey with some hesitation. They don't really understand. They don't really believe that a woman can play all of that. Sometimes it drags us down and it’s kind of frustrating, but sometimes we see other young kids and parents really looking forward to seeing their girls play hockey, which is amazing and inspiring. We are bringing joy to them and showing the real beauty of the sport. That’s what I want people to understand.

GK: When you were a little girl, what were your most vivid memories of playing hockey?

SV: I remember the first time my parents pushed me out to practice with a boys’ team. I really didn't like it, maybe because I was small and I was shy among the boys. But then—and I don't remember when it started—I was thinking, “Oh, I can't miss a practice!” I remember that feeling, when I understood that it was serious and I couldn’t just quit. Back at that time, there were no girls’ teams, and it was just me by myself in my age group. After a couple of years, a girls’ team opened and my mom actually coached there. I joined the team, and I think that I was the youngest one. That's how it started.

GK: What are some of your passions off the ice?

SV: I had the chance to play in the NCAA Division I, and then I played for Calgary. I have always thought that I needed to do something with my English knowledge. I'm getting a degree at St. Petersburg University right now, and I would like to be a translator later on. We'll see how it goes. Besides that, I love plants and am really interested in flowers. I like to read and to travel. Many fields are really interesting to me, like architecture and design. Sometimes I don't have a lot of time to dig into other subjects because of my normal routine, my hockey career. I love dogs and cats and try to help strays get off of the streets if they are injured or abandoned. Russia is full of stray dogs who need help, so that really drives me.

GK: No wonder you got along so well with the Vanke Rays. Many of them adopted stray dogs in China.

SV: They told me all of the stories about saving dogs from there and bringing them to North America. That was really amazing.

GK: What is one lesson you will take with you from hockey for the rest of your life?

SV: Never give up, because there are so many ups and downs through your whole career. Sometimes you lose, sometimes you win. The main thing is how you wake up the next morning. Whether you lost the game or you were the worst player and you know it—what happened is not the main thing. It’s how you cope with that, how you handle it, how you put yourself back together. If you’re trying to make the best you can out of it, you will flourish again. 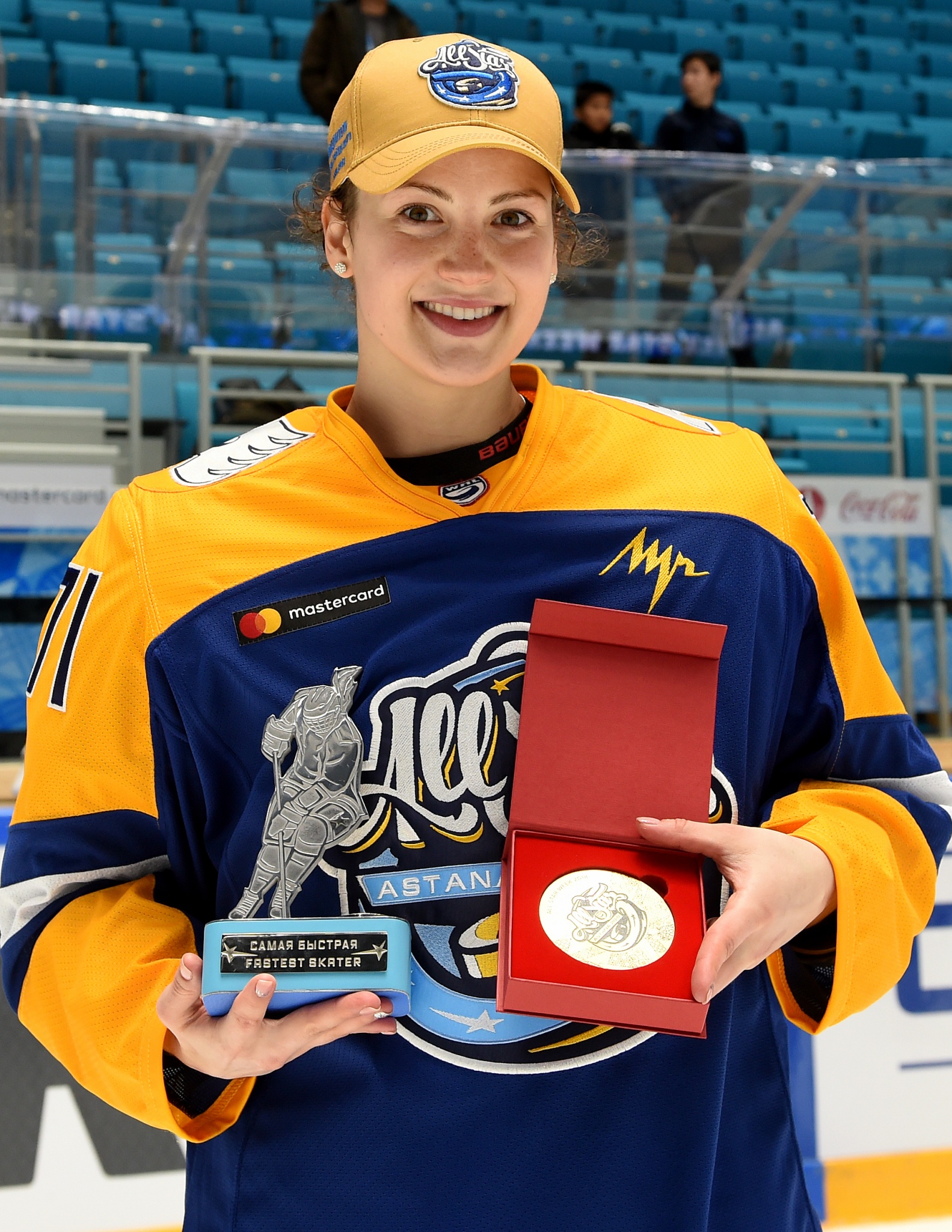