Friday brought four pre-season games as preparations for the 2021-2022 campaign pick up pace.

Spartak’s new head coach Boris Mironov got off to a winning start in his first game behind the bench for the Red-and-Whites. Mironov took the opportunity of a game against VHL opposition to explore some of the depth of his roster: new arrivals Vasily Ponomaryov, Emil Pettersson and Jakub Jerabek were all absent.

Of the new faces to feature, returning forward Alexander Khokhlachyov scored twice and Dmitry Kugryshev had three assists. Swedish goalie Oscar Dansk played the first 30 minutes of the game without allowing a goal. Defenseman Dmitry Vishnevsky also scored two goals as Spartak won comfortably. Khimik got some revenge in a shoot-out as Nikita Yazkov and Vladimir Bobylyov converted their attempts.

Avangard was back on the ice for the first time since winning the Gagarin Cup and the Hawks’ power play made the difference against Vityaz. Bob Hartley gave 20-year-old forward Arseny Gritsyuk a role on the special team, something already seen in the youngster’s 15 KHL appearances to date, and was rewarded when Gritsyuk opened the scoring after seven minutes. Another power play chance saw Vladimir Bryukvin, a summer capture from Dynamo Moscow, double the lead.

The middle frame was goalless, but Vityaz got back in the game at the start of the third when Danil Voyevodin stole the puck on the blue line and scored a fine individual goal. However, the Avangard power play clicked once more with Ilya Kablukov making it 3-1 before Yaroslav Kosov’s empty-netter wrapped it up. Avangard also won a post-game shoot-out. 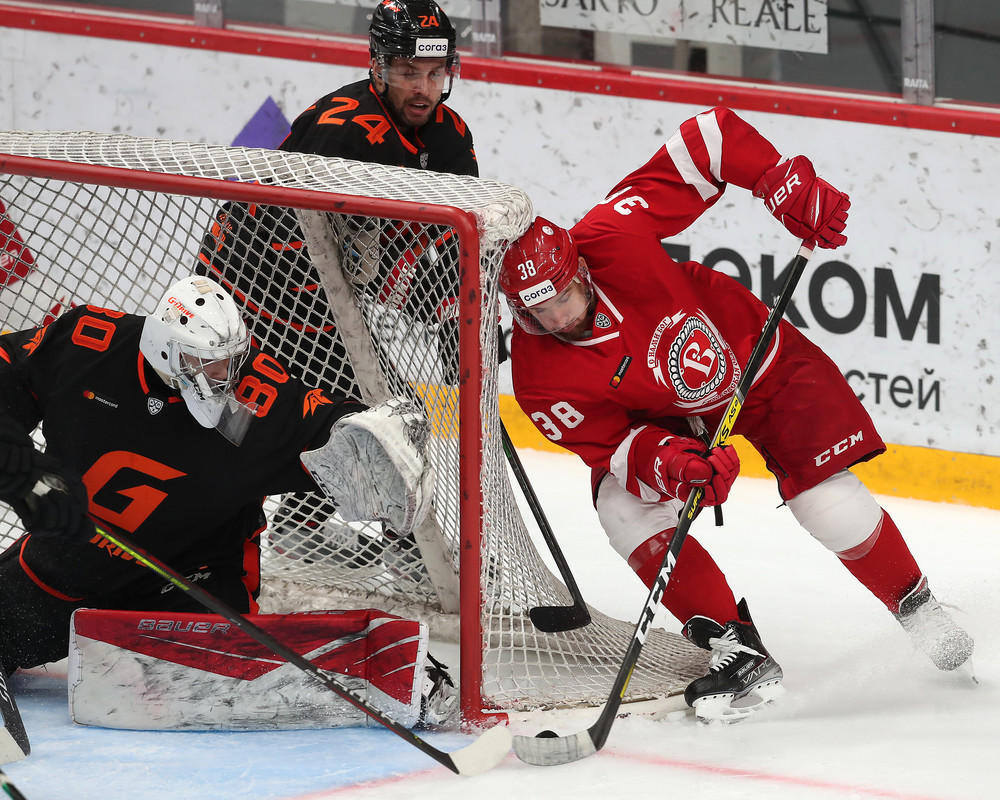 Both these teams we replaying their second games of the summer. Dinamo lost to Admiral in a shoot-out last week before Sibir defeated Yunost Minsk. This time, though, it was the Bison who prevailed but, once again, Craig Woodcroft’s team went to overtime.

Denis Mosalyov was the key player in this game. The experienced forward scored a hat-trick, including the game-winner on 62:15. For Sibir, Nikita Shashkov was on target for the second game in succession when he cancelled out Mosalyov’s first. Sibir led for a time thanks to Oleg Li’s goal midway through the second period, but Alexander Kogalev tied it up once more midway through the third and Dinamo went on to win it.

There was no hint of pre-season lethargy as Neftekhimik took on Salavat Yulaev. The teams shared eight goals in regulation, with the host recovering from 1-4 to force overtime before finally yielding in a shoot-out.

Both teams took the chance to look at some of their young prospects. Ufa gave game time to Kirill and Yaroslav Tsulygin, two sons of the team’s coach Nikolai. Neftekhimik was the only team to ice any imports, giving debuts to Czech defensemen Lukas Klok and Roland Knot.

The early stages belonged to the visitor. Goals from Gleb Kuzmin, Danil Bashkirov and Rodion Amirov opened a 3-0 lead, and in the 52nd minute Evgeny Lisovets made it 4-1. But Neftekhimik rallied from 1-4 and tied the game 11 seconds before the hooter thanks to Bulat Shafigullin. Salavat ultimately won it in a shoot-out with Alexander Pashin getting the decisive tally.