KHL.ru continues its series rounding up the seasons of each of the 23 teams that took part in the 2020-2021 championship. Avangard reached the Gagarin Cup finals for the second time in three seasons and finally lifted the trophy for the first time in its history.

In the 2020 playoffs, Avangard suffered an unwelcomed first-round exit. This meant that the team needed some strengthening, and the boards worked hard on the transfer market, acquiring Sergei Tolchinsky, Damir Sharipzyanov, Sergei Shirokov (traded from Spartak in exchange for Alex Khokhlachyov), Jiri Sekac, Corban Knight, Alexei Bereglazov, and Kirill Gotovets. Moreover, the Hawks’ scouts found in Europe Oliwer Kaski and Ryan Boucher in the AHL. Most of these signings were key for Avangard to reach the Gagarin Cup goal.

Bob Hartley’s men showed consistency and excellent results in the regular season, ending up in the East’s second-place, trailing only Ak Bars. There were a few unexpected losses, like in the games against Severstal and Kunlun after SO, or Amur and Torpedo in regulation.

In the Gagarin Cup, Avangard started with an easy 4-1 over Avtomobilist. The Hawks then needed six games to defeat Metallurg. Moreover, in the clash against Magnitka, Avangard showed that they can take a knock — after losing game five 1-7, they won the series-deciding game six in complete stride. The series against Ak Bars was an incredible one, with the teams only won away and game seven decided by an OT goal by Oliwer Kaski, the team’s top-scoring defenseman. CSKA was considered the team to beat in the finals, but a better strategy and a higher commitment were vital for the Hawks to lift the first Gagarin Cup in their history.

Sergei Tolchinsky moved to Avangard after enjoying limited time on ice with CSKA, and with the Hawks, the forward proved his former team that they were wrong, winning the Cup and playoff’s MVP honors. Tolchinsky’s season played out like a Hollywood movie, with the happy ending in the form of the Gagarin Cup’s clinching goal. After such a phenomenal season, he was deservedly called up to represent Russia at the 2021 IIHF World Championship. Despite the Red Machine’s result, Tolchinsky was one of the best in his team.

Reid Boucher moved to Avangard from the Vancouver Canucks’ system and had a tremendous season, being the Hawks’ top sniper (32 goals), second scorer, and the most game-winner. The American forward also had the second-best +/- rating for Avangard. His strong parts are his excellent speed, fast hands, and out-of-the-box thinking — these skills helped him leading the team with three shorthanded goals.

The Finnish iron-man missed only two games in the whole season, and he was the third Hawk for matches played. Kaski was excellent for Avangard especially in the playoffs — in one of the games against Avtomobilist, he logged more than 33 minutes on the ice, and, naturally, he scored the game seven’s OT goal that sent the Hawks to their second Gagarin Cup finals in three seasons.

This year’s playoffs saw only two games seven. In the first one, CSKA defeated Lokomotiv, and the second was performed by Avangard and Ak Bars. The Hawks went ahead thanks to a goal by Kirill Semyonov, then Dmitry Voronkov tied things up. Before the first horn, Kaski scored the 2-1 goal for Avangard. In the second period, Ak Bars replied with Albert Yarullin and Artyom Galimov, and it looked like Kazan had the upper hand. However, Ville Pokka tied things up again, and a shot by Kaski in OT got Avangard fans on their feet even if the game was in Tatarstan.

Bob Hartley spent three seasons in the KHL, with two Gagarin Cup finals qualifications and a Gagarin Cup triumph. Hartley, thus, won at each level he worked in (QMJHL, AHL, NHL, and KHL). If that’s not enough, the Canadian coach was also awarded Best coach honors in 2020-2021. His hockey was hard to deal with for most of the opposition, and his results talk aloud about Avangard’s strategy. 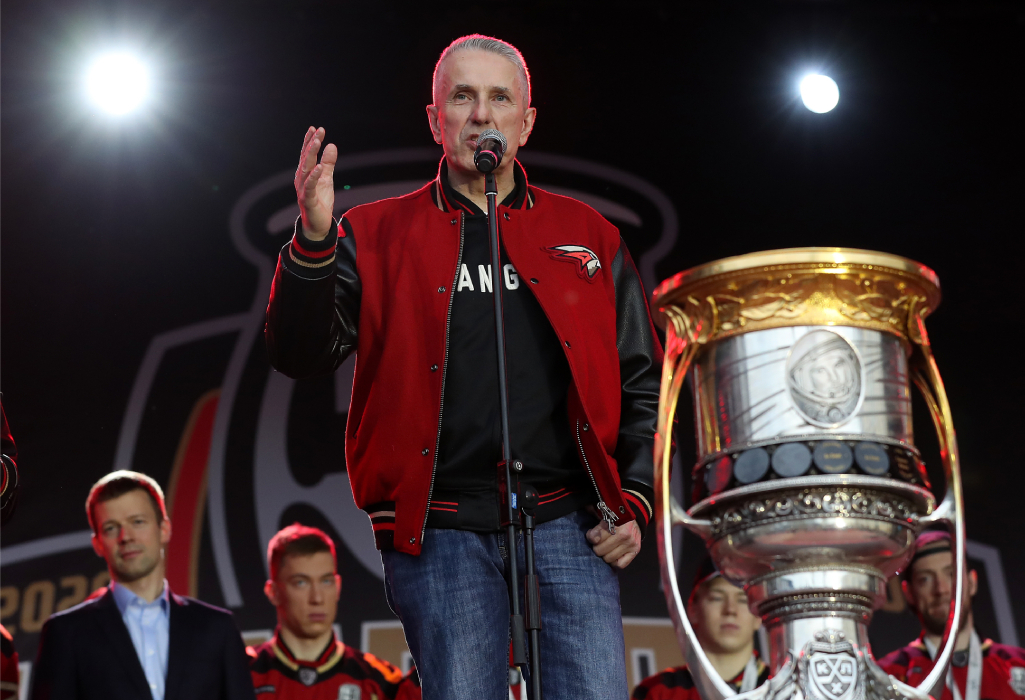 “I’m 60 already, and I realized that not all the decisions in life are up to you. I’m proud of being a part of this club, and I enjoy working with Avangard. We left Omsk, but we now have fans in two cities. I’m under contract for a further year, then we’ll see what happens,” Hartley said after the end of the season.

After the Gagarin Cup triumph, Avangard will have to work hard to rebuild its roster: Yegor Chinakhov, Kirill Semyonov, and Klim Kostin moved to the NHL, and Ilya Kovalchuk, Igor Bobkov, Boucher, Sekac, Alexei Potapov, Andrei Stas, and Alexander Yaremchuk left the team.

However, the Hawks didn’t remain inert and signed 16 players in replacement. The most significant signings were Vasily Demchenko, returning to Russia after spending last season in the AHL, and the IIHF WC’s top scorer Peter Cehlarik. Moreover, Avangard also traded with Vityaz for Alexander Dergachyov, with Barys for Dmitry Shevchenko, and with Dynamo Moscow for Vladimir Bryukvin. The Hawks also signed Francis Pare, Ivan Telegin, Yaroslav Kosov, and Vladimir Zharkov.