KHL.ru goes on reviewing the 2020-2021 season for the league’s 23 teams. HC Sochi was the only team who sacked its head coach during the season, but it wasn’t enough to avoid several anti-records.

The 2019-2020 season was the worst in the Black Sea franchise’s history, and its consequences were a rebuild of the staff and the roster. However, those changes didn’t improve the situation — quite the opposite. In the 2020-2021 campaign, HC Sochi established history lows in most statistics: the fewest wins (14), the most losses (46, including 37 in regulation), the fewest goals (121), the most allowed goals (202), the fewest points (37), and consequently, the lowest-ever place in the standings (21st). Moreover, they had another feat: HC Sochi was the only KHL team to sack its head coach during the 2020-2021 campaign.

However, it can’t be said that they were mere sparring partners for the other teams: most of their games were a real battle, just that HC Sochi found itself too often on the wrong side of it. A good example was the game in St. Petersburg — the Black Sea franchise heavily outshot SKA (41-19) but lost the game 3-4.

It was the first full-time season in the league for the 23-years-old D-man after playing 15 games three years ago. Miromanov had a more than decent showing. He was even the team’s top scorer for some time, and it’s not a surprise, since he used to play as a forward until only five years ago.

Shmelyov had a tremendous season and posted career-highs for both goals and points scored. In January, he posted a six-game scoring streak, and four times he was the only Sochi player to appear on the scoresheet. However, he had a three-game scoring drought in the season’s tail and couldn’t surpass the club’s record, held by Andre Petersson.

Tochitsky managed to accrue two career-highs this year — for assists and points. He had only one draught, with a nine-game streak without any point, but excluding this streak, Tochitsky showed good consistency.

In December, HC Sochi and Dinamo Riga had a very entertaining game — unfortunately, without any attendance. At the 35th minute, Riga scored the 4-1 goal, but the Black Sea franchise managed to tie things up and go ahead. Lauris Darzins tied things up again just one minute to the horn, but an OT goal by Igor Rudenkov gifted HC Sochi the final victory.

After the above-mentioned game in St. Petersburg, Sochi suffered from a big loss in Balashikha (2-7), and it was Alexander Andriyevsky’s last night with the team. Yegor Bashkatov was appointed as interim head coach for the next game (1-4 to SKA), but one day later, HC Sochi hired Evgeny Stavrovsky. Earlier, he worked in Cherepovets with both Almaz and Severstal (as an assistant). Starting in a new team is always hard, but Stavrovsky had one more challenge: he wasn’t a result of the club’s system, but he joined Sochi from another team, and he didn’t know everything from within. It’s hard to gauge a coach’s performance in this kind of situation, and Sochi’s board decided to give Stavrovsky another chance — he’ll lead the team for the 2021-2022 campaign. Now the coach will have the opportunity to start the season with the team and explain his philosophy better, and only after this, the board will have a better idea about where the team is heading. 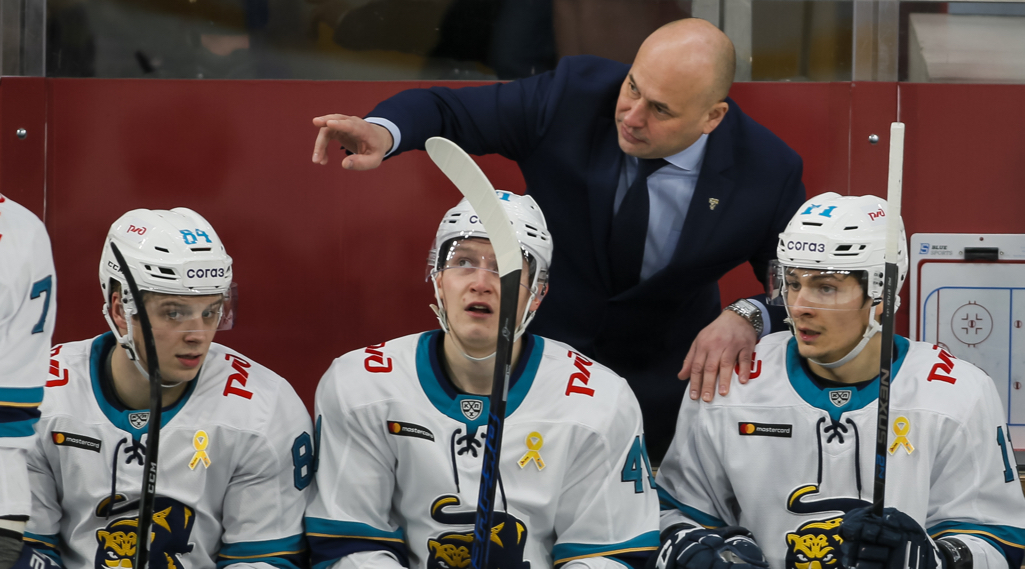 “I thank the HC Sochi’s board for having allowed me to work as a head coach in the KHL. It has been an incredible experience. The season was a very interesting one, and now I fully understand what working in this league means and how to work to achieve our goals. Our whole staff was at the first experience at the KHL level, but I have no regrets for the way we worked.”

Last year’s bad results were primarily due to some mistakes with the offseason transfers, particularly with the import players. No one among the international players met the expectations, especially the Swedish netminder Joel Lassinantti. However, every cloud has a silver lining, and Lassinantti’s bad numbers allowed Maxim Tretyak to gather further experience instead of simply sitting on the bench. Moreover, the Black Sea franchise isn’t rushing in signing international players, having added only the Slovak Martin Bakos to its roster. Another exciting signing is Daniil Ilyin. The hard-working, 25-years-old center is still showing excellent potential for further growth. The team had a severe loss as Sergei Shmelyov moved to Salavat Yulaev, but there is still time to sign replacement players. HC Sochi’s GM Andrei Zyuzin declared that we’ll see a whole different team next year, ready to have more ambitious plans.