Russia rolls on in Riga, Kazakhstan aims high — the KHL week in review

The group stage of the IIHF World Championship is coming to an end with Russia, as usual, well placed to top its group ahead of the knock-out rounds. For Kazakhstan, meanwhile, there’s a chance to make history with a first ever visit to the quarter-finals.

Team Russia continues to make steady progress at the IIHF World Championship, sharing top spot in Group A and adding reinforcements for the knock-out stages. A 4-1 win over Switzerland, inspired by Gagarin Cup MVP Sergei Tolchinsky, took Russia to 12 points from five games and a three-way tie with the Swiss and the Slovaks. There are two remaining group games for Valery Bragin’s team — Sweden on Monday evening and Belarus on Tuesday. Vladimir Tarasenko and Dmitry Orlov, both of who starred in Bragin’s World Junior gold medal team of 2011, are available for those games. Goalie Sergei Bobrovsky has also joined the Russians in Riga but is completing his quarantine before coming into contention for the knock-out rounds.

Team Kazakhstan is enjoying its best ever World Championship campaign and can book its first ever trip to the quarter-finals with victory over already-eliminated Norway on Tuesday. With a roster based almost entirely on players from Barys, and coached by Yury Mikhailis, the Kazakhs have enjoyed shoot-out wins over Latvia and Finland (beating those nations for the first time ever), as well as defeating Germany and Italy. The 11-3 victory over the Italians at the weekend was the country’s biggest ever win in the top division of the Worlds. Roman Starchenko (7 points) leads the team in scoring ahead of Nikita Mikhailis and Curtis Valk (both five).

However, with the team close to making history, head coach Mikhailis cautions against getting carried away. “There’s no sense of euphoria here,” he said after that win over Italy. “Maybe there was a bit after the games against Latvia and Finland. But, as you can see, this team keeps working in every game and gets results. We’ll keep getting out there and giving it everything, playing as a team to get results.”

After the excitement of victory over Sweden for the first time at a World Championship, this year’s tournament fell away fast for Belarus. Four successive defeats, including a painful 3-4 loss to outsider Great Britain and a heavy 0-6 drubbing from Switzerland, mean that Mikhail Zakharov’s team cannot make the knock-out stage. As a result, Belarus has rested several of its dual-national players and taken the opportunity to give youngsters an opportunity — including hot prospect Danila Klimovich, who became the fourth youngest Belarusian to play at the Worlds.

One of the biggest players for team Kazakhstan in Riga is Darren Dietz. As a dual national, the Canadian-born defenseman has been part of the Kazakh set-up since 2019 and he’s enjoying his first taste of a top-level World Championship. And he’s not afraid of aiming for the very top. “We’ve already seen a few shock results, and that’s inspiring from the point of view of how hockey is growing in more countries. So why shouldn’t Kazakhstan win it all?”

The Barys D-man is surrounded by his club colleagues on the national team, and believes that can be a key factor. “It’s an advantage for us and we can use it to help us,” he added. “We know who can do what on our team. There’s that understanding about what we can do in each game, what we can achieve.” 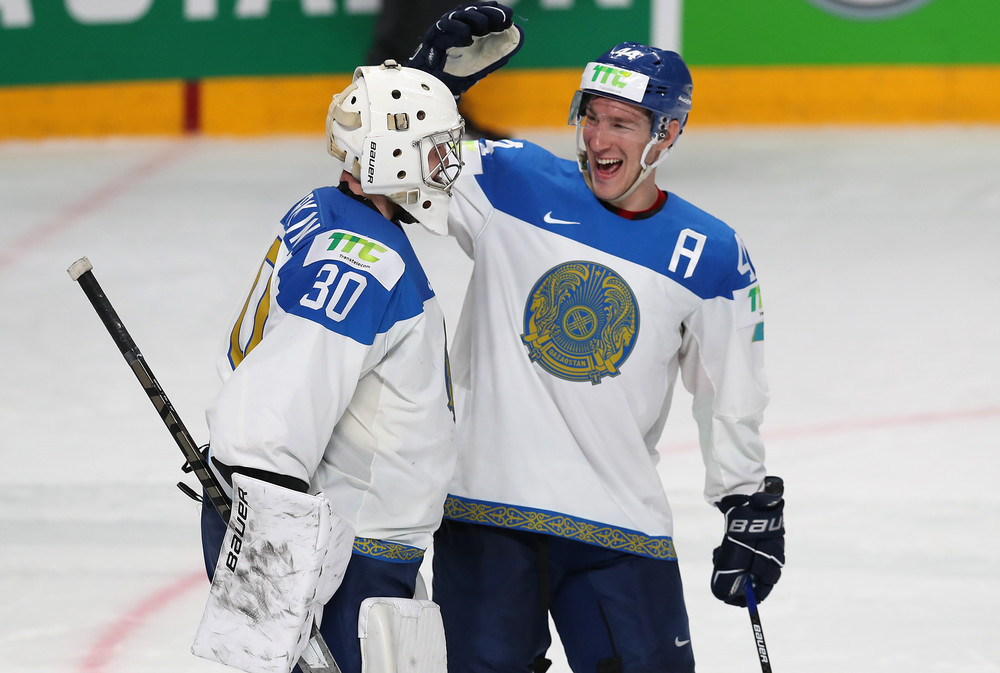 The KHL’s end-of-season awards will be presented on June 8, and the nominees for two more prizes were announced this week. The three candidates for goalie of the year are Timur Bilyalov (Ak Bars), Eddie Pasquale (Lokomotiv) and Lars Johansson (CSKA). For rookie of the year, it’s a battle between Vityaz forward Zakhar Bardakov, CSKA prospect Maxim Sorkin and Avangard’s cup-winner Yegor Chinakhov.

Bardakov, Sorkin, Chinakhov – contenders for Rookie of the Year

Bilyalov, Pasquale and Johansson – nominees for Goalie of the Year

Russia’s sledge hockey teams will be in action in Sochi this week in one of the final warm-up events ahead of the 2022 Paralympic Winter Games in Beijing. Russia has ‘A’ and ‘B’ teams in the four-way tournament, with opposition coming from Slovakia and Kazakhstan. It’s the fourth edition of the tournament, which first featured as part of the KHL’s 2017 All-Star Week in Ufa and has since found a permanent home in Sochi’s Olympic park. As Russia’s prospective Paralympians get back to action after the pandemic, KHL president Alexei Morozov is hoping that this week’s tournament will be a useful step towards the Games.

“Due to the pandemic, the Paralympic community met great challenges, so it’s important for us to help and support them,” Morozov said. “Our support for sledge hockey is one of the key social projects for the KHL. In sure this tournament will be important for all of the teams, and the games will be more exciting than ever.”