Sergey Kalinin won World Juniors, Worlds, the Gagarin Cup and Olympic Gold before the age of 30. He has gone to the KHL Finals with both teams participating in this year’s clash, a tidbit he claims to have forgotten until our catchup over the weekend. The seasoned veteran and NHL alum walked into the Traktor Chelyabinsk locker room this summer as captain, and posted one of his best-ever performances on the Eastern Conference Cinderella squad. Traktor climbed from bottom-feeder to playoff contender, a metamorphosis Kalinin described as “perestroika” before the 2020-2021 campaign even began.

A native of Omsk and product of the Avangard system, Kalinin played for his hometown club until 2015 when an opportunity with the New Jersey Devils arrived. The undrafted forward spent two seasons in North America before signing with SKA Saint Petersburg in 2017. He won Olympic Gold in Pyeongchang (2018) and a Gagarin Cup Championship with CSKA (2019) upon returning home. While the 2020 playoffs were terminated early due to COVID-19, the Russian Hockey Federation awarded Red Army the season top honors ex-post. He collected the title and joined Traktor in July, in search of greater playing minutes and responsibility.

I caught up the perennial champion to discuss his interesting change of scenery this season, views on the Gagarin Cup Final and much more.

Gillian Kemmerer (GK): You left reigning champions CSKA for Traktor, a team that has struggled in recent memory. Did you have any concerns prior to the season start? How was the opportunity pitched to you?

Sergey Kalinin (SK): Not really, no. I wanted to prove to myself what I could do, and how I could play. The coach, Anvar Gatiyatulin, told me that he needed me. I had worked with him before for one camp—two months—when I got traded. That’s all I needed to know to make the decision.

GK: You described the season before it even began as “perestroika.” Were there as many changes as you expected - and was Gatiyatulin a big part of that?

SK: Well, he’s getting better and better every day, every year. He’s still studying, but he’s very smart. I’ve played a lot against Traktor, and I’ve heard a lot about the organization. When I moved there, I saw so many changes. It really surprised me. As a player, it was really cool to see. The team had changed so much over the summer before the season even started. It was a little bit easier for me because half of the team was new. I knew a couple of guys and coaches going in, so it wasn’t a problem for me. I’ve been close with [Alexei] Byvaltsev because we were playing together. We are friends outside of the rink and went to sauna, spent time with our wives together.

GK: Talk to me about your experience of Vitaly Kravtsov, who really came into his own this year.

SK: He’s young and getting better every time he steps on the ice—as a person, as a player. I wish him a very good career in the NHL. I know from experience that it’s hard to play there, but he can do it. His hands set him apart and his head too. He wants to work, and he works hard. We talked about the NHL, but he didn’t ask for specific advice. He had already been there a couple of times and he knew what to do, what to expect. 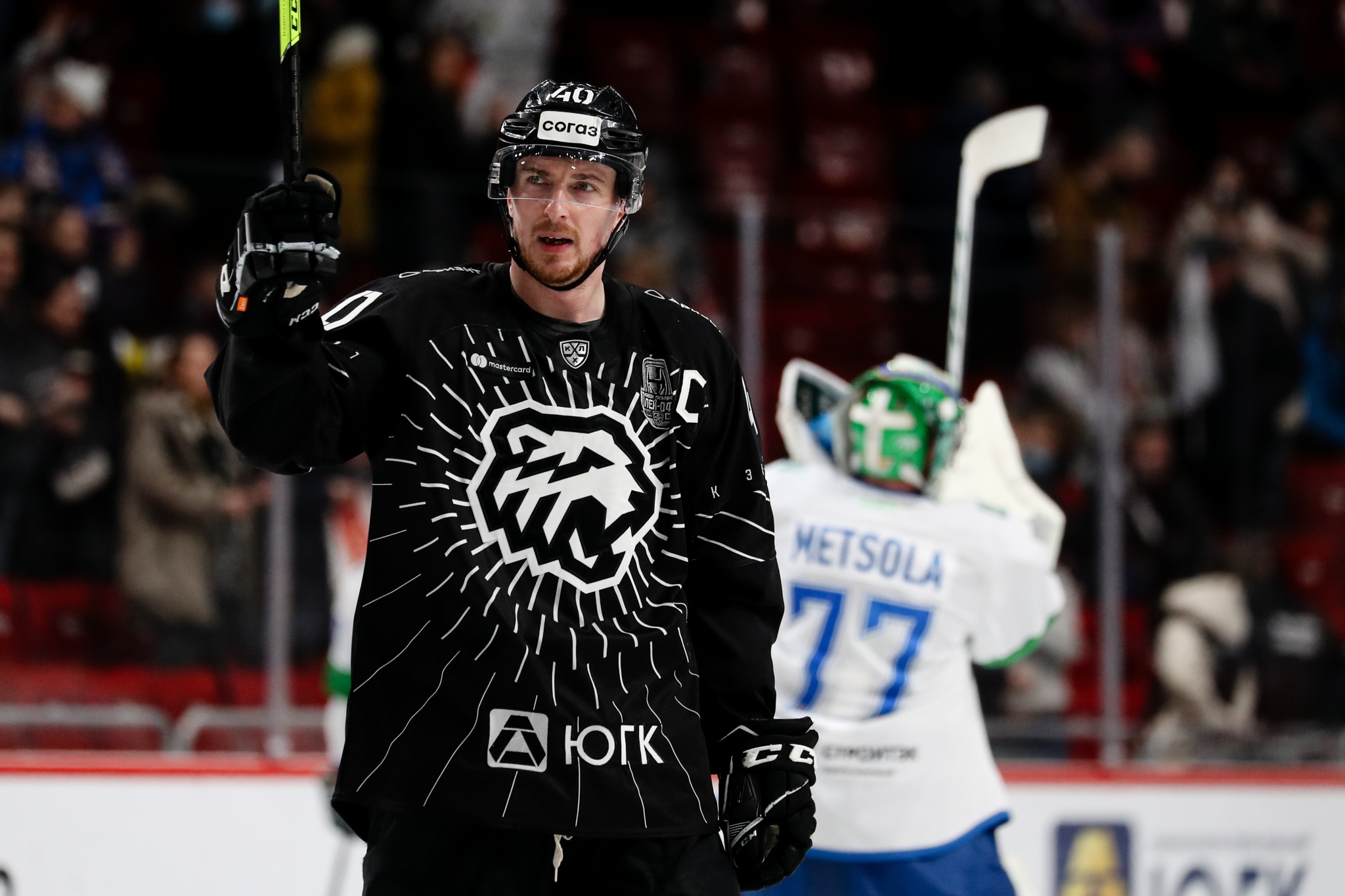 GK: You experienced a major upgrade in terms of playing minutes. Did that require some adjustment?

SK: Well, sure—and that’s why I moved to Traktor. I wanted to play, wanted to enjoy the game. The first [weeks], it was a little bit hard, but then it was awesome. I really appreciated that trust the coach gave to me. Ice time was a big part of that.

GK: Did you face any specific challenges with regard to COVID? Roster upheaval, lack of ice time the offseason?

SK: We didn’t have the [roster upheaval] problem. Nobody was sick during the season. We had some issues before the season, right after camp. Nothing changed for me in terms of preparation. I am between Moscow and my hometown of Omsk in the offseason, but I try to practice and live in Moscow because my coach lives there. I was able to skate about a month before the season began.

GK: What was Traktor’s best game of the season, in your opinion?

SK: Probably CSKA at home. We lost, but it was a really good game. We played like a team, stayed together the whole game. It went to overtime, then penalty shots—there was everything in this game. We were really like a family. It’s always great when you play against your old team, especially when you win. We beat them about a month later.

GK: CSKA lost an unprecedented number of important players this summer, you included. Why does it seem that they haven’t skipped a beat?

SK: I understand the whole thing, what they’re trying to do. CSKA always wants to win. That’s their mindset, and it was the same this year. They pick players only for certain roles. The systems work, and they acquired a couple of good players—but it’s all about system. You don’t have to think, you just have to do what they’re asking for. The success comes from when players believe in the system. [Nikitin] expects you to be honest and work hard—to do honest work.

GK: You’ve been to the Gagarin Cup Finals with both of the teams competing now—CSKA and Avangard.

SK: [Laughs] I forgot about that, actually. You just reminded me that I went to the Finals with Avangard.

GK: Did you expect it to be so close?

GK: So who do you root for—the hometown club, or your adopted home of Moscow?

SK: None. I just worry about a couple of players on CSKA. We played together, and I know them well on a personal level. It’s all about people. 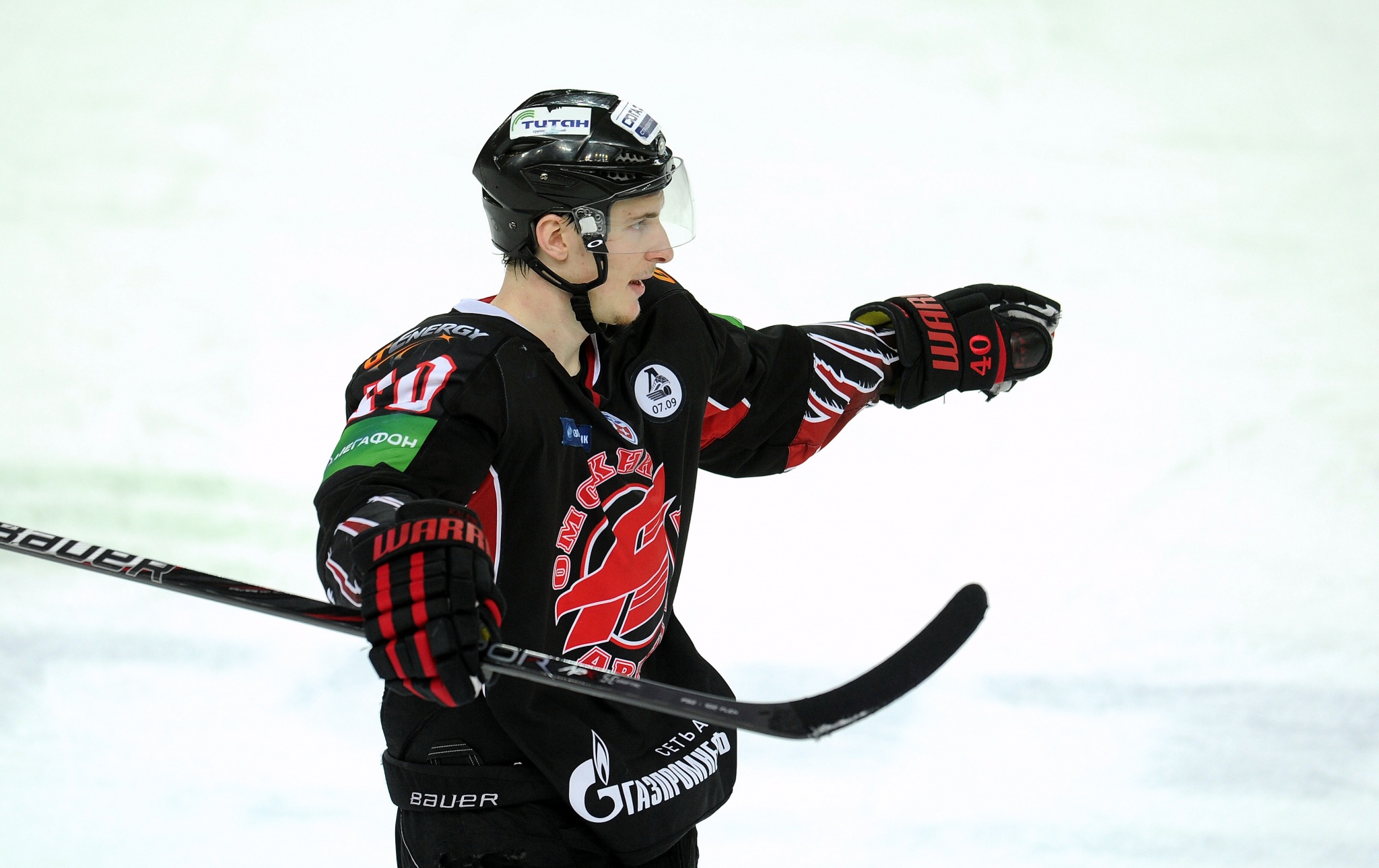 GK: Tell us about your childhood hockey days in Omsk.

SK: It’s always cold, so it’s easy to play there! They have so many outdoor rinks in front of the apartment buildings. Right now, parents try to take their kids to special hockey programs—power skating, stickhandling. In my childhood, we just went outside and played hockey. That was our extra work.

GK: Who was responsible for your introduction to hockey?

SK: My mom and grandma. Nobody played hockey in our family, but my Mom came to me and asked if I wanted to give it a try. At first I said no, but then she said, “Come on—just one practice. If you don’t like it, we won’t go back.” So I went there…and I liked it.

GK: You suffered a terrible concussion early in your professional career. Did it change anything for you, and did you ever doubt the ability to come back?

SK: Nothing changed, except one thing: my head is always up right now! [Laughs] That’s it. In terms of coming back, I didn’t even think twice about it. I was sure I was coming back. When you’re playing hockey, you know that it’s always dangerous.

GK: On a happier note, you were a part of the 2018 Olympic Team and came home with a gold medal from South Korea. Describe that experience.

SK: It was awesome to have been there and to have been a part of that team. We had a really great roster and coaching staff. It was such a fun time to be at the Olympic Games. Everything was a really new experience—where we walked, ate, and spent time around other athletes. We spent a lot of time with the Russian women’s hockey players because we were living in the same building. We’d meet each other downstairs before and after the games. I was proud of my team and my country. We sang our National Anthem on the podium. It was kindof hard to play without our flag, our anthem—but we just focused on the game. We had to stick together and move forward.

GK: Your country has such a rich history with regard to the Olympics. Do the remaining Soviet greats often involve themselves with the current National Team?

SK: We met a couple of the Soviet players who won all of the gold medals before World Championships and the Olympic Games. Vladislav Tretiak, Boris Mikhailov, Slava Fetisov and Boris Mayorov wished us good luck. It was really important to us. 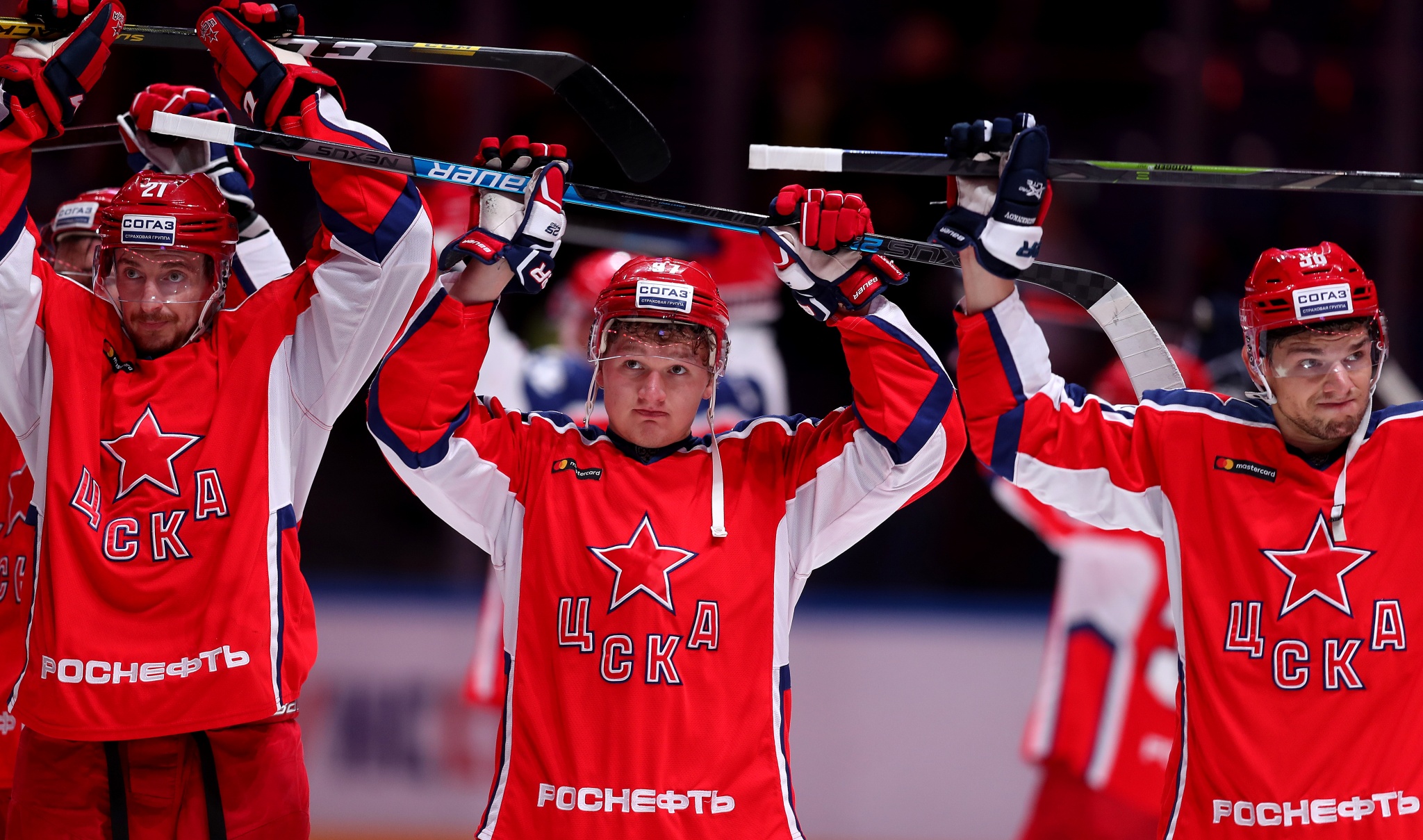 SK: Football, I would say. I play with NHL guys who live in Moscow in the summertime like Radulov and Kaprizov. We play hockey together, and then the next day we play football.

GK: If you could go back in time and play one night with any hockey team in history, what would you choose?

SK: World Juniors, that final in 2011 when we won. The third period, how we played. I would replay this one moment.

GK: What’s the last song you listened to on your iPhone?

GK: Wasn’t expecting that. And finally—what was the last thing you had delivered?