This week sees the start of the Conference finals. In the East, we’re looking forward to the top two battling it out for a place in the final, but in the West CSKA faces a game seven decider against Lokomotiv. Elsewhere, Reid Boucher can’t stop scoring, while Craig Woodcroft talks about the transformation of Dinamo Minsk.

The top two from regular season will go head-to-head in the Eastern Conference final. Ak Bars, top dog in the regular season, booked its place with an impressive sweep of Salavat Yulaev and has yet to taste defeat in this year’s playoffs. On Sunday, Avangard joined the team from Kazan, winning 5-1 in Magnitogorsk to complete a 4-2 success over Metallurg. The teams last met in the 2019 playoffs, when Bob Hartley’s Hawks sensationally swept the defending champion in the first round and went all the way to a Grand Final against CSKA. The series starts on April 3.

Showdown in the West

For the first time this season, Monday brings a game seven playoff decider. Defending champion and top seed CSKA Moscow hosts Lokomotiv Yaroslavl in the winner-takes all clash in the capital, with SKA awaiting the victor in the Western Conference final. The battle between Loko goalie Eddie Pasquale and CSKA forward Konstantin Okulov might be the decisive confrontation here: Pasquale twice blanked CSKA and allowed just one goal in his team’s third win of the series; Okulov has 6 (3+3) points in the match-up to date.

Avangard forward Reid Boucher is in fine form: the 29-year-old Canadian has a 15-game productive streak that dates back to Jan. 29, and his short-handed goal in the Hawks’ 5-1 win in Magnitogorsk on Sunday takes him to 11 goals and eight assists in that run. Boucher has already set a new record for an Avangard player in the KHL era and Sunday’s goal matches the club’s all-time record. However, Boucher’s eight points from eight post-season appearances is a little way behind the scoring leaders in this year’s playoffs: team-mate Sergei Tolchinsky is out in front with 12 (5+7) points after a goal and a helper against Metallurg at the weekend.

Man of the Week — Reid Boucher

‘We got rid of the people who were not interested’

After several seasons in the doldrums, Dinamo Minsk’s return to the playoffs was one of the talking points of the season. Head coach Craig Woodcroft talked to KHL.ru about rebuilding the Bison.

“It was not just the transition that the country was going through — a changing of the guard from older generation player to the younger generation,” Woodcroft said. “There were a few things we needed to address and fix. Over that first year, we figured out that we needed to move on from some players in order to get the culture right. We had to get complete alignment with the players, the coaches and the management. In a nice way, we got rid of the people who were not interested. Anybody who wasn’t aligned with where the organization wanted to go, we couldn’t march forward with them.” 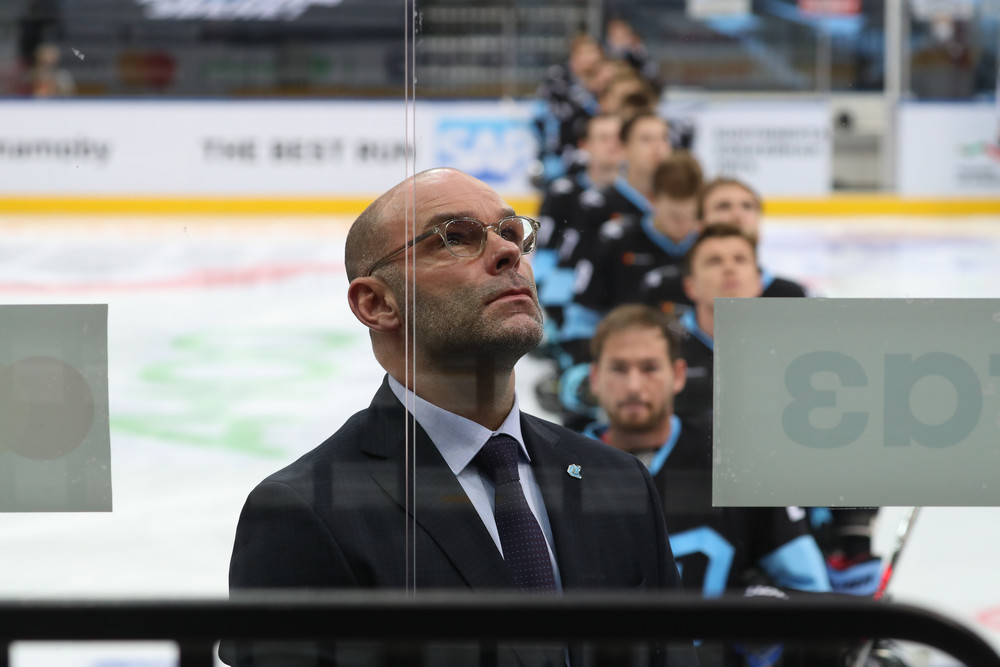 When Belye Medvedi goalie Ilya Gorbunov posted his fourth shut-out of this year’s playoffs during the quarterfinal series against Irbis, he matched a JHL record. Previously, Vladimir Galkin, Ilya Konovalov and Igor Shestyorkin also recorded four blanks in the battle for the Kharlamov Cup. However, Gorbunov won’t get a chance to set a new mark: his Chelyabinsk team lost out 3-1 to Irbis in that second-round match-up.

Matvei Michkov, the leading goalscorer of the regular season, found the net in the first game of SKA-1946’s quarter-final series against his former club, Loko. After that goal, an emotional Michkov celebrated by cupping his ears to the fans in Yaroslavl. However, his joy was short-lived: on the next attack, Loko’s Nikita Kiryanov scored on SKA-1946 and responded with an identical gesture, this time directed at the Petersburg bench. Kiryanov’s goal wrapped up a 5-2 win for the home team, which went on to win the series.

Women’s final waits until May

The postponed Women’s Hockey League final series between defending champion KRS Vanke Rays and regular season runner-up Agidel Ufa will take place after the Women’s World Championship in Canada. The series was due to start on March 13 but was delayed when several Agidel players tested positive for COVID-19. Although the team is now out of quarantine, there is no time to play the best-of-five series before various national teams begin their pre-tournament camps ahead of the action in Nova Scotia on May 6-16. The two rosters include players from Russia, Canada, the USA, Finland and the Czech Republic. A date for the final will be announced following discussions with all concerned.