Man of the Week — Reid Boucher

KHL.ru’s weekly ’Man of the Week’ series goes on with Avangard’s Reid Boucher. After an excellent regular season, the American forward started the playoffs positively with five points in five games.

The Hawks are flying high in this year’s playoffs, and one of their best players is Reid Boucher. The 27-years-old offensive player, at his debut in the league, is performing great in the postseason as well, after finishing the first stage with an impressive 48 (24+24) points in 51 games. His performance was a team-leading one, and he’s following with a strong showing now that it matters the most. With Avangard up 2-1 in the best-of-seven series against Metallurg, the American forward is a crucial player for Bob Hartley’s men. Today, the Hawks have an incredible chance to widen the gap over Magnitka.

“As a kid, I grew up playing in Lansing. My earliest memories are going to the rink and playing House League, just having fun playing. It was just something you did for fun — I never knew that you could turn it into a living,” Boucher told The Faceoff column in September. The first step in turning pro was being recruited in the nationwide program USNTDP, where he spent two seasons. “I have an uncle that played when he grew up. My dad played basketball, football, and baseball, never played hockey or anything. My brothers never played. It was just something that he introduced to me, playing street hockey or playing knee hockey in the house. I really fell in love with it and started getting on the ice and ended up becoming pretty decent at it.”

In his second year with the development team, Boucher helped Team USA winning gold at the 2011 U18 WJC in Germany, ending up as the second goalscorer of the tournament trailing only a record-breaking Nikita Kucherov.

After that fantastic, triumphant showing in Germany, Boucher moved North to Canada to play in the Ontario Hockey League with the Sarnia Sting. He didn’t impress much in his first season, but in the second, he was again on the top as he led the league with 62 goals in 68 regular-season games. During his junior career, Boucher was then called by the New Jersey Devils in the 2011 Entry Draft with the ninety-ninth pick in the fourth round.

His talent was evident, but not enough to secure him a full-time spot with the big boys. In the AHL, he was a superstar, but in the NHL, when younger players often aren’t guaranteed a top-six spot, Boucher struggled to produce. The Michigan native’s career was still good for 133 accumulated games in the NHL, with the Devils, the Nashville Predators, and the Vancouver Canucks, producing 42 (20+22) career points. In the AHL, despite his success rate in the NHL, he was nothing short of excellent, being one of the top players in the competition and a perennial top-scorer. However, last summer, as an impending free agent, he decided to pursue a career in Europe.

“Our season ended in the American League, and there were talks of the NHL starting the playoffs and all that stuff. My agent came to me with this offer from Avangard, and he said, ‘It’s something you should think about.’ My wife and I talked to my parents about it, we probably mulled it over for a week or two before we came back with a decision. It just felt like it was the right thing to do for myself and my career.” However, it wasn’t the first time that he felt attention from the European leagues. “I had gotten some interest throughout the last regular season, but it wasn’t something that I would ever think about leaving in the middle of the season to go do. Especially with the uncertainty of what’s going on in North America right now, if they’re going to have a season or when they’re going to start and stuff, I just wanted to get over here and play hockey. I didn’t want to be sitting in the gym, working out, waiting for a season to come,” Boucher explained when asked about his move overseas.

The forward had a fantastic start of his KHL career, with three goals in his first three games and Bob Hartley pushing him to the top lines with more and more playing time. Boucher didn’t score a hat-trick yet, but he had a three-game performance in February when he potted a double and also had an assist in the Hawks’ 5-1 win over Dinamo Riga. That game is the forward’s career-high in single-game points, but there is little doubt that he’s capable of doing even better. And if it will come in these playoffs, the Hawks’ chances to get to the Gagarin Cup finals again will increase exponentially. 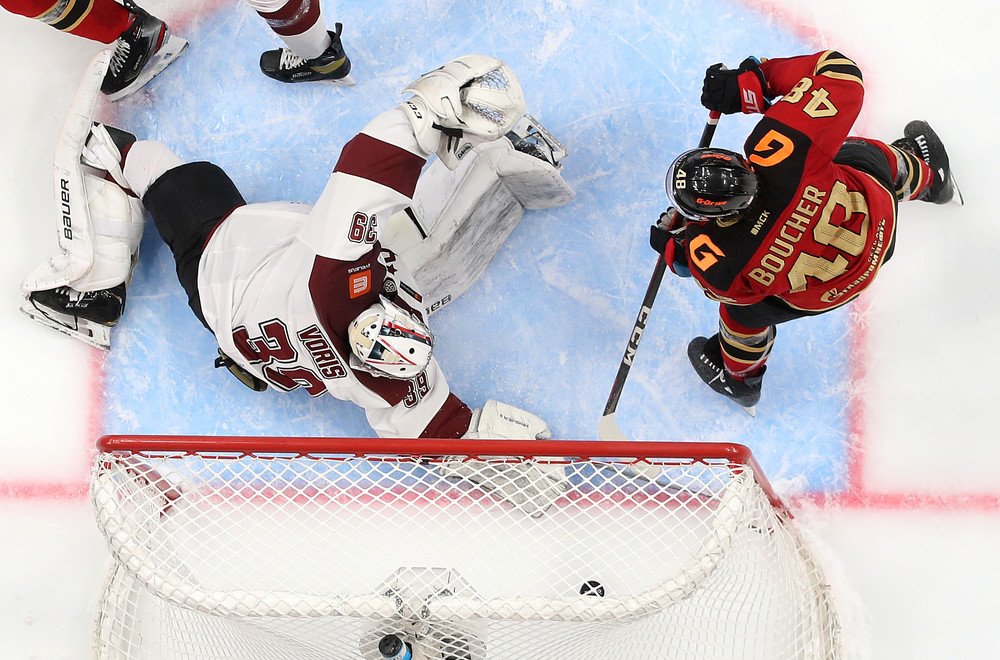