Peteris Skudra: Correctness is the most important thing in coaching

In this interview with KHL.ru, Peteris Skudra talked about leaving Dinamo Riga, the difficult season, having eight different goalies, and changing his coaching views.

After five seasons in Nizhny Novgorod and being fired from Traktor Chelyabinsk last year, Peteris Skudra accepted an offer from Dinamo Riga this summer. The team led by the 47-years-old coach ended up in the last position, winning only five games in regulation. Why the Latvian franchise had this kind of performance? What changed in his coaching views? The former Dinamo Riga bench boss replied to these questions and much more.

“It has been a difficult season,” Skudra starts the conversation. “If thinking about everything, it was a good thing already that we played it to the end. However, despite the results, there were plenty of positive moments. No one in Riga could even imagine that the season would be so hard. In September and October, we had a lot of difficult moments.” Not surprisingly, Skudra said that ’it was a good thing that we played the season to the end.’ “When the regular season started, the guys started getting sick,” he explains. “We twice had to undergo quarantine. We literally had no players to play with, and we had to forfeit some games. We lived two months like this. We also had to play the guys before they were ready. But in the end, we survived. By mid-November, the situation was more or less normal.”

Moreover, the team had an above-average turnover rate, with many players joining and leaving the club. “Dinamo Riga has this approach to its lineup: when it was clear that we had no chances to get to the playoffs, the club changed its direction. It was much different from what was established in summer. In November’s tail, we had the roster we wanted to have since the start, but then we had to think about the economics, and the boards decided to change the team’s direction. I agreed with them. During the season, we had many young players coming to our team, and many local players too; thus, we didn’t play a single game with the roster we wanted to have at our disposal.”

For example, Dinamo signed good players in Matt White, Konstantin Komarek, and Zack Mitchell. But all three left the team in the end. “We understood that parting with them we could save some money and give more space to the local players. For example, a promising center like Janis Svanenbergs. It’s the best time for a rebuild in Dinamo Riga, and I’m proud of being the man who commenced it. I think that now the franchise will move in the best possible direction.”

Moreover, the team also parted with two of the team’s longest-tenured players, Gints Meija and Mikelis Redlihs. “It was my decision,” he confirms. “Dinamo misses the playoffs for many years, and the team had too much routine; there wasn’t enough competitive aggression to reach a goal bigger than the mere participation in the league. We can’t hide the fact that the KHL is becoming a younger and younger league, and the speeds are much faster than they were even just a couple of years ago. This is why we parted with Meija and Redlihs. They are great guys, but hockey is an ever-changing venture.” 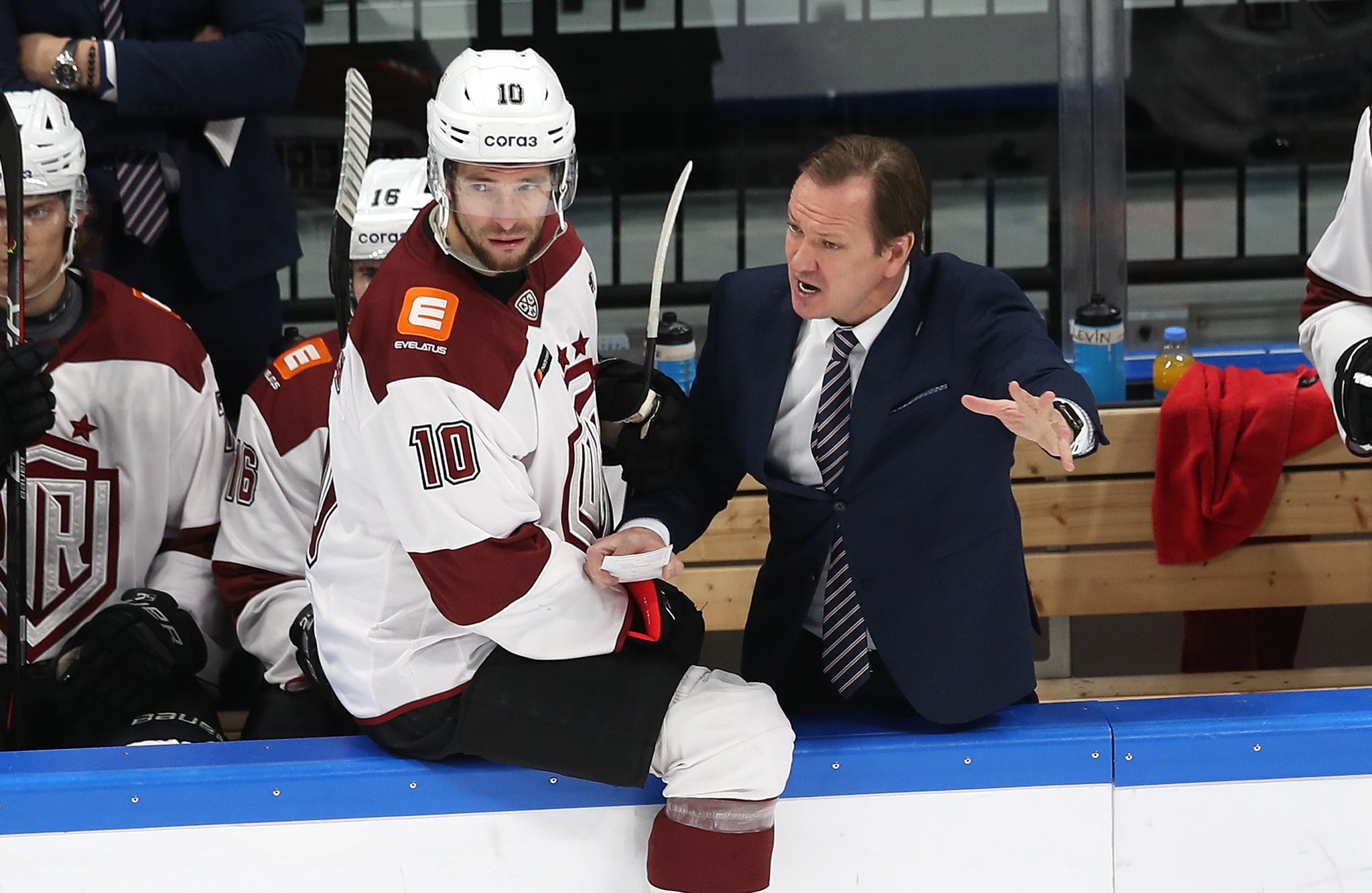 “We didn’t find enough chemistry within the team”

In Riga, Skudra signed a few older players, but the moves weren’t illogical. “This summer, I acquired Denis Parshin and Ilya Proskuryakov, then we also got Evgeny Grachyov, Gennady Stolyarov, and Gleb Zyryanov. We had to admit that we were a pretty small team. We lacked power upfront. This is the reason why we signed Grachyov, who hasn’t hit his prime yet. I also want to underline that they are all excellent team players. They have a huge experience in the KHL, and they gave a great example. I saw many things that I didn’t like regarding the players’ work ethic, and they managed to correct the situation. However, I need to admit that we didn’t find enough chemistry within the team.”

One of the problems was that the team didn’t manage to play as a unit. “We couldn’t become a system-driven team,” the coach says. “Our team gathered later for objective reasons; we started working only in August. We didn’t manage to get our game without the puck to the necessary level. And this is what makes the team a solid one. I think that we were good in the offensive zone; many experts underlined this. Maybe some of our younger players lacked composure and finishing, but I saw their will to play the puck. We also had problems with the man advantage.”

Another anything but ordinary thing was playing a whopping eight goalies in a single season. “Here, we should remember that, at one point, we had three netminders sitting in quarantine at the same time,” Skudra explains. “Including Zane McIntyre — he picked up the virus as soon as he arrived. And we had a four-game road trip in front of us. And we were at five goalies already. But what should we do? You simply cannot play without a goalie. At one point, we had a simple goal: end the day. And for that, we had to call up guys from the Latvian league, from Russia, or simply anyone. We risked needing to dress our goalie coach or even myself for a game. After Stanislav Galimov had his surgery, we signed Ivan Nalimov. Ilya Proskuryakov, unfortunately, wasn’t himself after the illness. We were at the hospital at the same time, and we all saw how hard it was on him — he’s still not at his hundred percent.”

“They played well against the KHL’s leaders”

Other than eight goalies — plus dressing the 18-years-old Artjoms Lescenko for Oct. 28 away defeat against Dinamo Minsk, Riga had 45 skaters representing the franchise in the 2020-2021 campaign. Most of them were under 25 years of age. Some of them impressed the Latvian bench boss. “Martins Dzierkals,” he names. “He’s a hard-working guy who isn’t scared by responsibilities and is always ready to battle. He’s 23 already, but it was only his second season in the KHL, and he significantly progressed. The unit with him, Svanenbergs, and Bukarts was the best for more than 15 games. They played well against the KHL’s leaders, for example, against Kazan or in Moscow against Spartak. I was surprised by their focus and drive.” 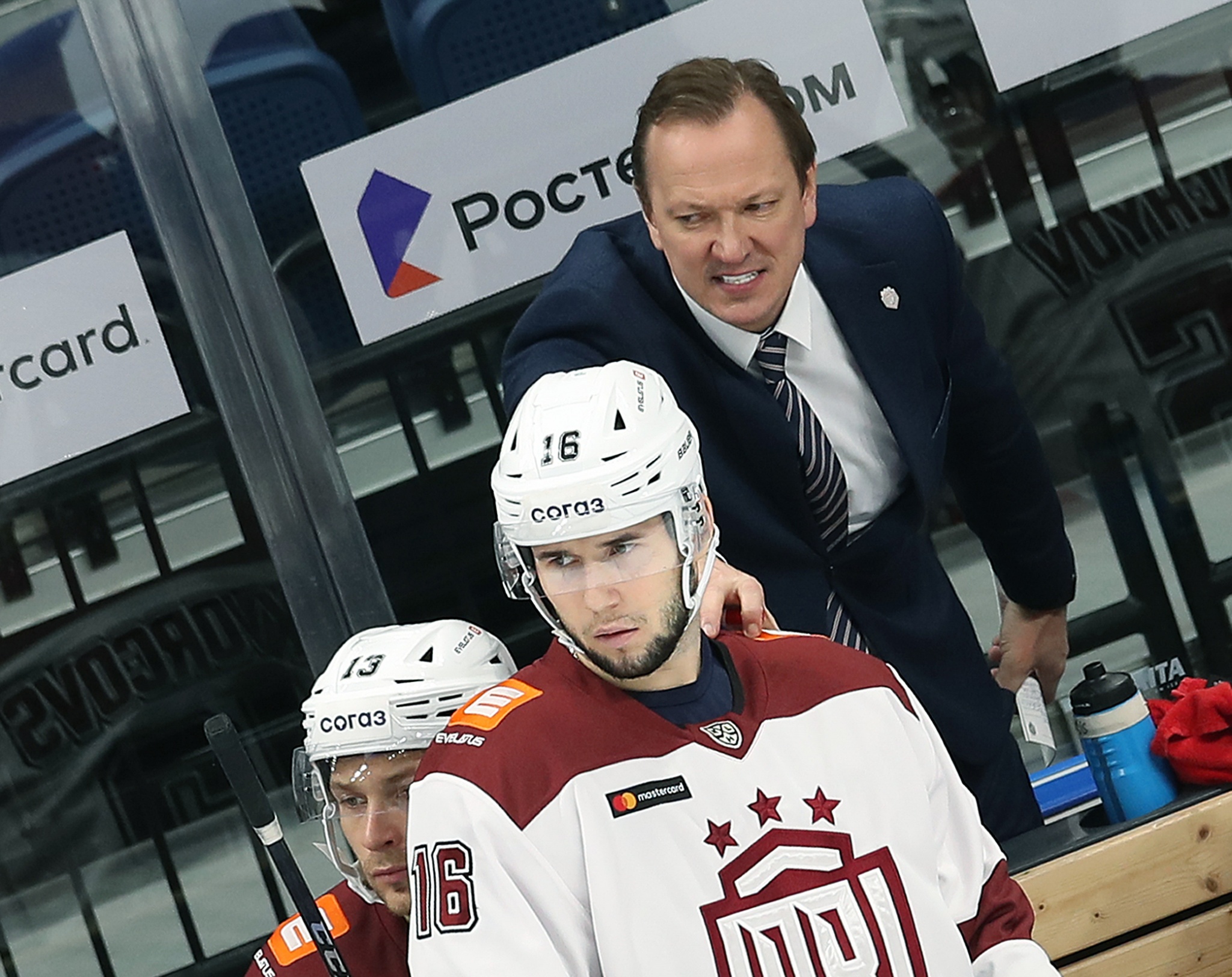 “Nowadays, you can play the puck a lot more than only a couple of years ago”

Despite ending the season on the bottom of the Eastern Conference’s standings, Dinamo Riga had two excellent away victories in Kazan and Moscow — against Spartak. On Jan. 19, an OT goal by JC Lipon gave Riga a historic 5-4 win, while on Dec. 30, the Skudra men defeated Spartak with a sound 5-2 score. “If we watch at the opposition’s level, the game in Kazan was our best in the season. Ak Bars is a well-organized team. Before facing them, we had a couple of away matches where we failed to play the whole 60 minutes to the full. However, in Kazan, we played our game from start to end. The same can be said about the win in Moscow: the guys followed the plan and had that kind of consistency that we lacked throughout the season. We also had a few good games that we lost by one goal.”

Skudra seems to have changed a lot since his times in Nizhny Novgorod. “This season, I earned significant experience on the game without the puck,” he says. “Earlier, I limited my players more. I overdid. But this year, I found myself often asking my players not to simply dump the puck in, and our entries in the zone with the puck on the blade in many games were twice the dump entries. We also spent a lot of time in the offensive zone, often beating our opponent in this stat. Hockey is always changing. Rules, styles, and the game itself are always on the move. Nowadays, you can play the puck a lot more than only a couple of years ago, when KHL hockey was tighter. The game has become less aggressive: earlier, there were more bigger players around willing to forecheck, more players prefer to play the puck. Even those who used to dump the puck in to enter the zone today look at what the other players do and try to play the same way.” 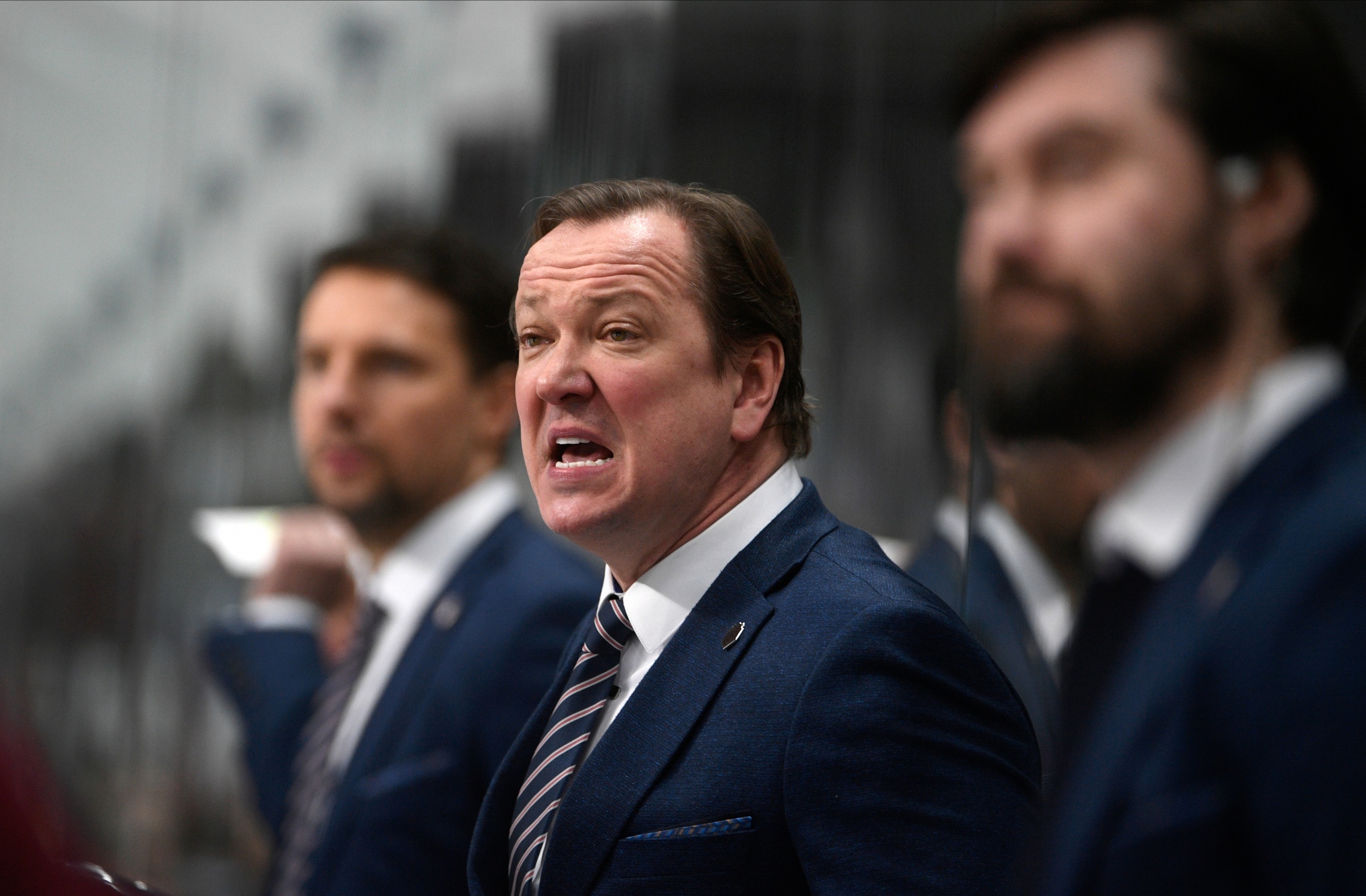 “With the years, my personality has changed”

Recently, Skudra left Dinamo Riga after his season in the Latvian capital. “We had a normal conversation,” the coach says. “I’m grateful to Mr. Savickis, who last summer gave me his team despite the difficult moment. Playing the whole season without attendance has been very hard. Everyone knows that Arena Riga is the sixth and seventh skater of the team. It’s not a case that we played better away. Dinamo Riga didn’t renew my contract, but I feel good about it as after such a season you need to move in another direction. I want to keep on working and not taking any pause. I want to win, and for me, results are the most important thing — this season in Riga was very hard for me.”

Once known for his aggressive ties with his players, Skudra has allegedly changed his view of this coaching life aspect. “With the years, my personality has changed,” he confirms. “For me, the most important thing is to be considered not a hard or a soft coach, but a correct one. I’m always happy when a player thanks me for my trust and the correctness in my job.” 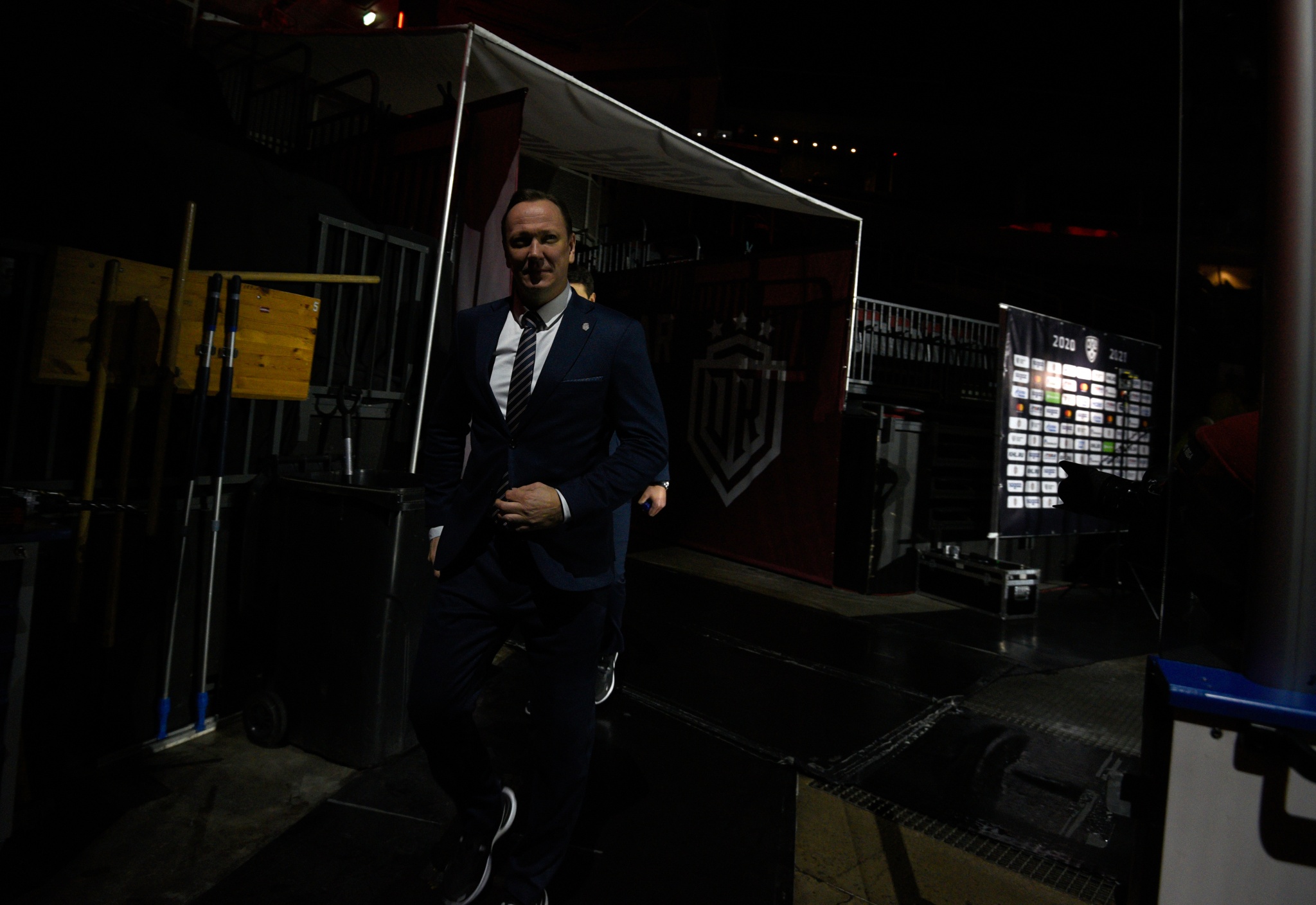