The first week of the playoffs brought individual and team records as fans came back in Kazakhstan. And in the Women’s Hockey League, we have a repeat of last season’s final to look forward.

Oleg Znarok overtook Zinetula Bilyaletdinov when he took charge of his 118th playoff game on Friday. The Spartak head coach began this post season on 116, one behind the Ak Bars legend, and moved into top spot during the Red-and-Whites’ series against CSKA. Both men have won three Gagarin Cups, but Znarok’s Spartak team looks unlikely to secure his fourth prize — CSKA leads the first round series 3-0.

Bilyaletdinov coached all his playoff games with Ak Bars, and Znarok was behind the SKA bench for many of his post-season battles. And this weekend saw those two clubs become the first to win 100 KHL post season games. The Army Men got there first, bringing up three figures with a 4-3 win at Dinamo Minsk to take a 3-0 lead in the Western Conference first-round series on Saturday. Then, on Sunday, Ak Bars followed suit with a 4-0 success at Torpedo. Metallurg, a two-time champion, could also reach 100 wins this season but would need to reach at least the Conference Final to do so.

Hockey fans always look forward to the playoffs, and none more than supporters of Barys. During the regular season, the arena in Nur-Sultan has been closed to spectators due to Kazakhstan’s anti-virus rules. However, when Metallurg visited on Saturday for game three of the playoff series, the doors were open at last. There are still limitations — just 3,300 tickets could be sold in the 10,000-capacity venue — but at last the fans are back. Unfortunately, though, Barys could not celebrate with a win, losing out 2-1 on the day and falling 1-2 behind in the series, which continues Monday.

When Severstal Cherepovets won 5-2 at Dynamo Moscow on Thursday, it was a notable event. The Steelmen didn’t just tie their series against the Blue-and-Whites, they also secured a playoff win for the first time since 2013. In that campaign, Severstal defeated Lokomotiv in six games in the opening round before it was swept by SKA in the conference semi-final; subsequently, playoff hockey has come to Cherepovets just once more, in 2018, when SKA again won in four games. Ironically, Dynamo’s two goalscorers in that 2-5 loss, Vadim Shipachyov and Dmitry Kagarlitsky are both former Severstal players, and Shipachyov was the team’s top scorer in the 2012-2013 season. Dynamo goalie Alexander Yeryomenko, chased during Friday’s game, was with the club in 2013 when it won its second Gagarin Cup.

For Alexei Kovalev, a legendary player on both sides of the Atlantic, 2020-2021 was a unique experience. He took on his first head coaching role, stepping up to replace Curt Fraser at Kunlun Red Star, and immediately found himself leading the team through a challenging season on and off the ice. But, as he told KHL.ru, despite being pitched in at the deep end, it was an experience to cherish — right from the off.

“I think it was the most fun that I ever had. It sounds hard, but when I started at first, it’s like it all happened in two days,” Alexei Kovalev said. “First, I was named the head coach—and then two days later, I’m in Moscow. The next thing I see are players in front of me that looked like they’d been out of hockey for two years and decided to un-retire to start playing hockey again. I had to send home about seven players after two days. People kept asking me, ‘How can you make a decision in two days that they can or cannot be part of the team?’ But two practices were enough to see if the player had skated after he stopped playing or not.” 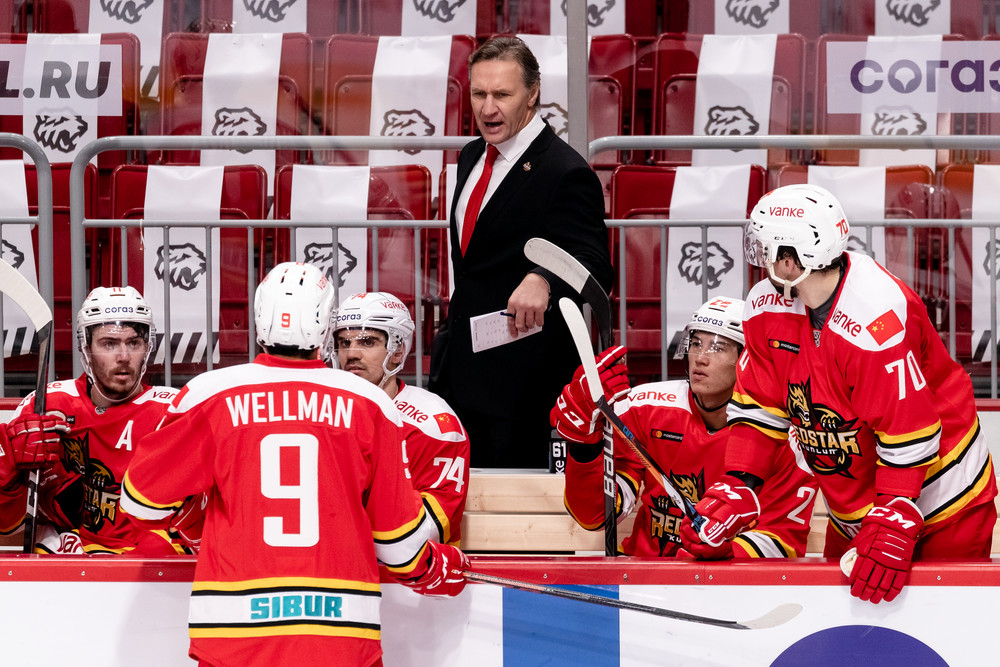 It’s been a while, but the KHL’s official podcast is back — and the latest edition is a blockbuster. Bob Hartley and Slava Fetisov talk to Gillian Kemmerer, discussing everything from the long-standing friendship between Avangard’s coach and Ilya Kovalchuk to an exhibition game on Lake Baikal aimed at raising awareness of climate change. Have a listen on the link below, and click ‘subscribe’ to make sure you never miss an edition.

Click here to listen to IceCast 2.0, Episode 1 on Soundcloud

Ladya forward Stepan Steshenko scored twice on Belye Medvedi — and one of them was a bit special. The 19-year-old pulled off a lacrosse-style goal of the type immortalized by Mikael Granlund. Unfortunately, that wasn’t enough to bring victory for Togliatti as Ladya went down 3-4 in its penultimate game of its Junior Hockey League campaign.

In the first game, the Chinese franchise blanked the opposition in a 3-0 win. Rachel Llanes scored twice and Kimberly Newell became the first non-Russian goalie to record a playoff shut-out (19 saves)

In game two, the Vanke Rays again opened a 3-0 lead but in the third period Biryusa hit back to make it 2-3. However, a late goal killed the comeback and KRS won 4-2.

For the second year in a row, the Vanke Rays will face Agidel in the final. The Ufa team had a real battle to get past SKIF in three games, with all three encounters settled by a shoot-out. In the decisive game, Agidel was down 0-2 with five minutes to play but battled back and grabbed a tying goal 20 seconds before the hooter. Olga Sosina was the key player, finishing with a goal, an assist, and taking the winning shot.

Sosina shares first place in the playoff scoring race with Hannah Miller of KRS. Both have 4 (2+2) points so far.

Raty on road to recovery

Noora Raty, the Vanke Rays goalie, is back on the ice and rejoining her team. The 31-year-old Finnish star suffered an injury in early February during an exhibition game against Team Russia. However, after a successful spell of rehab back home, she has been able to resume on-ice practice and, according to head coach Brian Idalski, was ready to meet up with her team-mates once more in Stupino after the Rays completed their semi-final series against Biryusa.

Raty back on the ice after injury