KHL.ru’s weekly column ’Man of the Week’ goes on with Malte Stromwall. After his trade to SKA, the Swedish sniper quickly found his groove and has recently potted a double when the Armymen defeated Kunlun Red Star with a 4-3 score on Monday.

One of the league’s top snipers, Malte Stromwall is currently on a hot streak, with a double netted in the recent SKA’s victory over Kunlun Red Star. The Dragons were up by three at the start of the third stanza, but then, the Swedish forward started scoring. First, he took advantage of a neutral-zone turnover to get in front of Dmitry Shikin and beat him from the left circle. Then, with less than five minutes to go, with Vyacheslav Leshchenko sitting in the sin-bin, he made it a 3-3 game with a fantastic one-timer from close range after a marvelous pass by Linden Vey. SKA then won the game in the dying seconds with Kirill Marchenko’s second of the night. Stromwall thus netted his 15th and 16th goals of the season, respectively, confirming his reputation as a dangerous forward with a lethal speed and shot. If taking only the latest two seasons — when Stromwall played in the league — he’s in the KHL’s top 15 for goals scored with 37, as much as Dynamo Moscow’s Vadim Shipachyov. And the season isn’t over yet.

Malte Stromwall was born on Aug. 24, 1994, in Lulea, a city on the coast of Northern Sweden home to a renowned hockey club and where his father Johan played most of his professional career. Johan Stromwall played for more than 20 years at a high level in Sweden and Austria, winning a silver medal with the Tre Kronor at the 1990 IIHF World Championship in Bern and Fribourg, Switzerland. Johan, whose #12 jersey was retired by Lulea, also worked as a coach in Sweden, Italy, and Austria. Hailing from a hockey family, Stromwall stepped in his father’s footprints and started playing hockey with Linkopings HC, just like former KHL D-men Magnus Johansson and Jonas Junland. However, different from most of his teammates, Stromwall left Sweden quite early to pursue a career in the Canadian major junior hockey leagues.

Following a pick in the second round of the 2011 CHL Import Draft, Stromwall crossed the Ocean that summer to play with the Tri-City Americans of the Western Hockey League. The Lulea native needed a bit to adapt, with a mere 27 (11+16) points in his first season, but his production skyrocketed the next campaign when he was his side’s second scorer with 66 (21+45) points in 66 regular-season games. However, despite this success, he wasn’t drafted in the NHL, and after two seasons in the WHL, he returned home.

Return to Europe and back to America again

Following a strong season with the Americans, Stromwall had his SHL debut with the Vaxjo Lakers, with a 7 (4+3)-point campaign as a rookie in 2013-2014. 2014-2015 was an eventful year for Stromwall, who failed to regularly find the net with Vaxjo and was then moved first to his native Lulea, then to HV71, ending the season with only six goals scored at the SHL level. In 2015, he joined the Allsvenskan side AIK, where he had a breakout year. Recording 42 points in 49 games, he was signed by the New York Rangers to a two-year, entry-level deal in April 2016.

In his first season in the AHL, Stromwall once again struggled to find his offensive touch, and after having scored only two goals in the entire 2016-2017 season and being reassigned to the ECHL the next year, he opted to walk away from his contract with the Rangers to sign in Finland.

Move to the Liiga

In the Liiga, finally, Stromwall found his groove and his scoring touch back as it was when he was playing junior hockey. Playing with KooKoo, after a solid first year, he broke out offensively and became the league’s top scorer, with 30 goals and 57 points. As it often happens, in the 2019 offseason as the Liiga’s leading scorer, he was approached by KHL teams and signed with HC Sochi. On the Black Sea shores, Stromwall was impressive once again, netting 21 goals in his debut KHL season and making it to the 2019-2020 All-Star Game at the VTB Arena in Moscow. The Tre Kronor forward started the 2020-2021 campaign on a positive note, then was traded to SKA in exchange for three young players. Finally, Stromwall will have a chance to play in a contending team and has recently shown to be in tremendous shape. SKA is currently the second seed of the Western Conference as they already claimed yet another Bobrov Division title, and most likely, they will face Severstal in the postseason. Will Stromwall find his way to be one of the Gagarin Cup playoffs’ top scorers? He certainly has all the tools to be one of them. 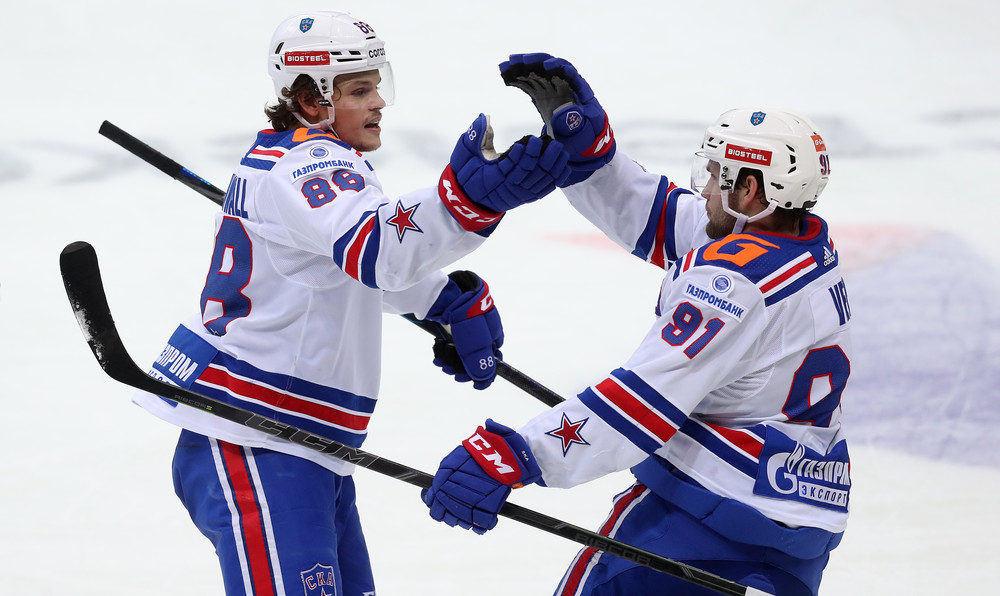