It was all about international action, with Team Russia continuing its unstoppable form this season. Nikita Chibrikov made a flying start to his international career, making an impact before his 18th birthday. In the KHL, Metallurg’s winning streak came to an end and Kunlun Red Star snapped its long losing run.

Another triumphant weekend for Team Russia saw the Red Machine go unbeaten through three games in Malmo, extending its Eurotour hot streak to nine. That secured top spot in the Beijer Hockey Games and the 2020/2021 Euro Hockey Tour. As in November, Russia selected an experimental roster under acting head coach Igor Larionov and once again the young eagles rose to the occasion. Wins over Finland (3-2) and Sweden (2-1 SO) set up Sunday’s showdown with the Czechs to clinch first place. Despite trailing 1-3 midway through the second period, the Russians rallied strongly and five goals in the third led to a convincing 7-4 win.

Nikita Chibrikov celebrates his 18th birthday tomorrow. And he does so as the third youngest player ever to represent Russia or the Soviet Union in international hockey. When he made his full debut against Finland on Thursday, he joined Vladislav Tretyak and Alexander Ovechkin on the short list of players to feature for the Red Machine before their 18th birthdays. And it got better: with an assist against Sweden on the Saturday and a first international goal in the big win over the Czechs, the SKA prospect became the second youngest scorer for the national team.

Chibrikov has yet to feature in tournament play for the U18s or U20s and he has only 12 KHL appearances. However, he insists he never lacked for confidence on his senior international call-up.

“I have every faith in my ability. This doesn’t happen easily, I had to work hard to make the national team and I put in some good performances in the KHL,” he said after the game. “I didn’t bring any nerves onto the ice, I went out there with confidence that I could do good things for the team. I can’t lie, I was a bit surprised to get a call to the senior national team, but I put a lot of work in, tried to progress my game and so I think I deserved the chance.” 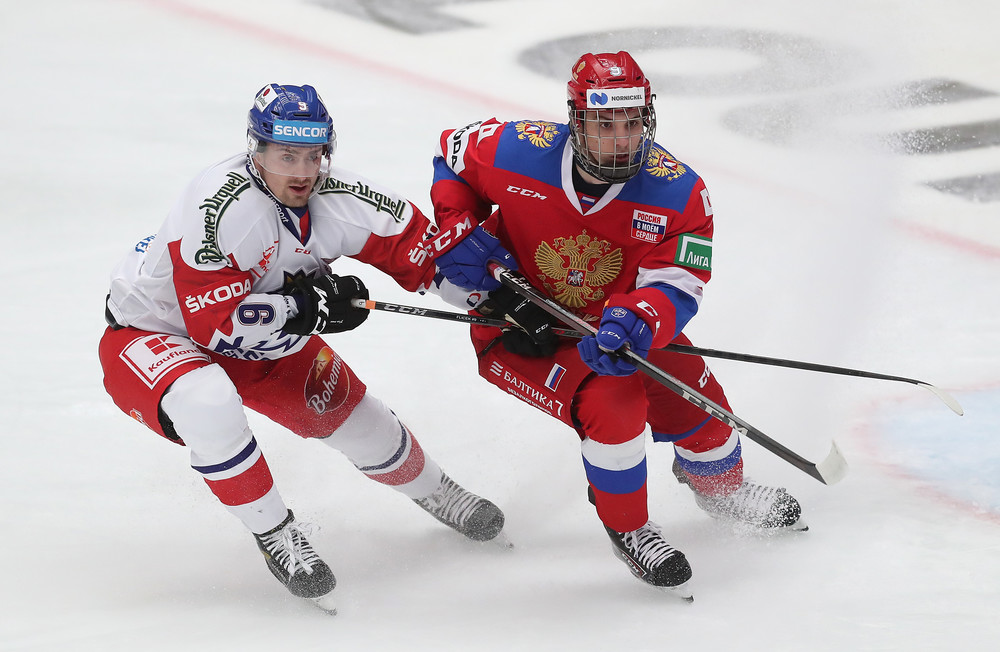 There was more international action in Nur-Sultan, where Kazakhstan hosted Belarus and Russia ‘B’ in a three-team contest. The host nation came out on top, beating Belarus 5-2 in a clash between two countries preparing for a return to the World Championship Elite Pool in the spring before edging Russia ‘B’ 2-1 thanks to a pair of Nikita Mikhailis goals. Head coach Yury Mikhailis had a look at several prospects, including young players from the Kazakh championship. Belarus also suffered defeat against Russia ‘B’, going down 2-4. Mikhail Zakharov’s roster included two new naturalized players — Francis Pare and Danny Taylor of Dinamo Minsk — but was unable to record a win in this event.

Mikhailis shoots down Russia ‘B’

There wasn’t much KHL action because of the internationals, but in the games that took place two long streaks came to an end. First, Kunlun Red Star travelled to Helsinki and grabbed an overtime win at Jokerit, ending a nine-game skid. The success, secured when Ivan Nikolishin snapped a 4-4 tie, was all the more notable as it came as China celebrated the start of the Year of the Ox. It was also the Dragons’ first win in Finland. Jokerit also had something to celebrate at the weekend, when a 5-2 win in Magnitogorsk ended Metallurg’s 10-game hot streak.

Tyumensky Legion forward Mikhail Suslikov has obviously been watching Pavel Datsyuk in action. When his team went to a shoot-out against Sibirsky Snaipery, Suslikov borrowed a trick from the Magic Man to convert his effort.

Passions boil over in Moscow derby

A Moscow derby is always a heated affair — and this time the battle got a little bit out of control. Krasnaya Armiya’s Nikolai Makarov and Dynamo Moscow’s Vasily Machulin dropped the gloves. The two games ended in wins for Dynamo.

KRS Vanke Rays stretched their winning run in the WHL to 11 games. Last week, the Chinese franchise hosted four games and won them all, beating Dynamo Neva 5-0 and 3-1 before posting back-to-back 5-1 victories over Tornado.

Those victories saw Brian Idalski’s team book a playoff spot. The defending champion will be joined by SKIF Nizhny Novgorod and Agidel Ufa, with the remaining post season berth still to be determined. Biryusa Krasnoyarsk is looking to hold off Dynamo Neva’s challenge for fourth place.

Alexandra Carpenter, last season’s top scorer and MVP, reached a big milestone with her 100th WHL point. On Friday she potted a hat-trick against Tornado to take her into three figures. The American forward also had a goal and four assists in the Vanke Rays’ other games.

This season, Carpenter has 42 (20+22) points from 22 games, placing her fourth in the scoring race. Tornado’s Anna Shokhina leads the way ahead of Agidel duo Nicol Cupkova and Olga Sosina.

Finnish goalie Noora Raty was stretchered off the ice during her last appearance for the Vanke Rays. However, the lower body injury she sustained in an exhibition game with team Russia is less serious than first feared. Last week, Raty posted an update on her Instagram confirming that she would not need surgery and was looking forward to a spell of rehab with family and friends back home in Finland.