Russia earned its eighth consecutive victory of the Euro Hockey Tour, a feat all the more remarkable for the wide range of players called upon by the national team this season. Saturday’s victory over Sweden in Malmo was perhaps the toughest yet, with the Red Machine inching over the line in a shoot-out after absorbing intense pressure in a 1-1 tie.

It was also a memorable day for Nikita Chibrikov. On Thursday, his debut made him the third youngest player ever to represent Russia. Today, he collected an assist on Russia’s goal to become the second youngest player to pick up a point for the Red Machine, at the age of 17 years, 11 months and 28 days.

In the early stages of this game, Russia had to weather a storm of Swedish pressure. The first period was one-sided, with Alexander Samonov the busier of the two goalies. Russia’s biggest problem in the first period was generating offense, with Igor Larionov’s players limited to a solitary shot on target. At the other end, Samonov made 10 saves as the Tre Kronor took the initiative after two power plays in the first five minutes.

The pattern continued after the intermission with little change. Indeed, if anything, Sweden tightened its grip on the game. Viktor Fasth, the former CSKA goalie serving between the piping for the host nation, had a fairly quiet time of it while Samonov was kept busy at the other end. The pressure paid off midway through the second period when Emil Pettersson converted Holmberg’s feed to give the Swedes a deserved lead.

After that, though, Russia woke up. Opportunities began to emerge in front of Fasth’s net with Pavel Kraskovsky testing the Lakers’ man and Zakhar Bardakov fanning a shot when well placed. That wasted opportunity was forgotten moments later, though, when Danila Moiseyev, a clubmate of Bardakov at Vityaz, tied the game in the 37th minute. Sergei Shmelyov’s shot went wide, young Chibrikov returned the puck to the slot and Moiseyev finished it off. The SKA prospect’s assist makes him the youngest player to pick up a point for Russia since Alexander Ovechkin. The Great 8 is also the only skater to make his full international debut for the Red Machine. 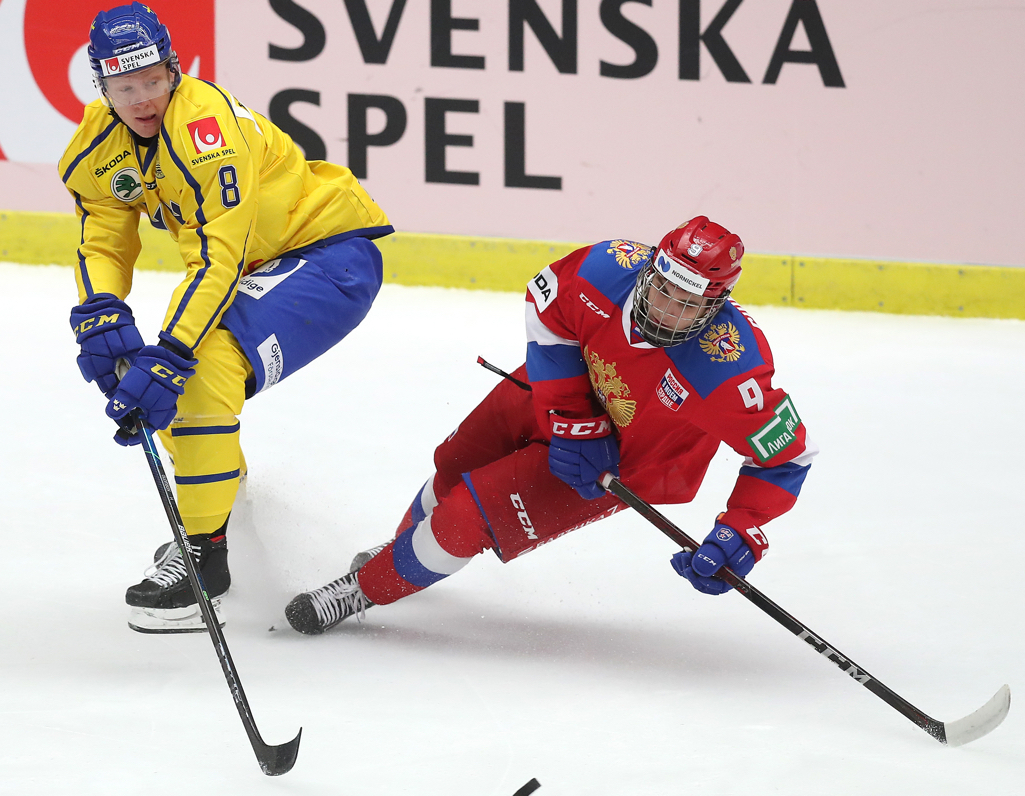 After plenty of scoring chances at both ends in the second period, the third was a quieter affair. Both teams were aware that the game was in the balance and neither was over eager to take risks. Nikolai Kovalenko’s hard work behind the net almost created a goal for Vladimir Butuzov, but Fasth was on hand to make the stop early in the frame. Later, Russia had a couple of power plays, with Pettersson picking up a misconduct penalty after his hit on Bardakov. Sweden managed to survive those scares, but the earlier menace from the home offense largely dissipated as the game neared the end of regulation.

Overtime could not separate the teams and even the shoot-out did not provide a flurry of scoring. Sweden’s Nils Lundqvist almost gave his team the edge, but his attempt hit the post. Vladimir Butuzov then found a way past Fasth and Samonov won his remaining duels to give Russia the verdict and make it eight consecutive Euro Hockey Tour victories for the Red Machine. Tomorrow, that unbeaten run goes up against a Czech team that has lost both its game in Malmo, but went to overtime on both occasions.

Igor Larionov, head coach, Russia
In the last couple of years we’ve been trying to learn from the best things about Swedish hockey — control of the puck, good skating, lots of scoring chances. In the second half of today’s game, the guys did that brilliantly. The whole team deserves credit: we didn’t break down; we survived, took ourselves in hand and produced a strong finish to the game.
Moiseyev is on fire right now, he has so much energy and enthusiasm. He looked good in both practices. You can understand how much he wants to prove himself and today he did just that. I’m pleased that we have players who are not content to wait for a chance, but who want to make opportunities for themselves. Moiseyev’s connection with Chibrikov worked out really well.

Alexei Moiseyev, forward, Russia
It was tough. Sweden skates well, looks after the puck well. I’m happy that we won. My goal was nothing unusual, we all know that goals come from the slot. My partner got the puck there, and I finished it off.
I got a call from the Russian Hockey Federation to ask if I was prepared to play for Russia. Of course, I said that I was ready, packed my bags and set off. It was a surprise, but I was aiming to get [an international call-up]. I can’t say it was completely unexpected. As for the World Championship, I’ll keep trying. Everything is possible.

Alexander Samonov, goalie, Russia
When they give you a chance to play, you have to take it. I am happy that things are going so well, I’m gaining a lot of useful international experience, but I don’t feel like I’m reached the ‘inner circle’. With the Swedes, the big thing was to get through the first period. They always start fast, create a lot in front of the net. But then we caught up and took our chances. In the shoot-out, I just worried about my game, I didn’t study the Swedish shooters.

Finland got its first win since the opening game of the Channel 1 Cup when it edged the Czechs in a shoot-out. D-man Vili Saarijarvi was the key man, potting a third period equalizer and going on to grab the shoot-out winner.

Unusually for a game between these two countries, there was little contribution from active KHLers. The Czechs selected a roster without their KHL stars for this tournament, while Finland called on just a handful of its current Russian-based contingent and was unable to invite players from Jokerit due to the club’s league commitments. The only man with a KHL connection on today’s scoresheet was Miiko Koivisto, a former Dynamo Moscow defenseman who assisted on Teemu Turunen’s goal at the start of the Finnish fightback.

Finland moves off the foot of the tournament standings with this win, while the Czechs picked up their second point after another tie in regulation.

Russia B ends on a positive note

Russia’s reserve selection finished its trip to Nur-Sultan with victory over its Kazakh counterpart. Oleg Bratash’s players missed out on top spot in the Kazakhstan Open yesterday after losing to the host nation’s first team but gained a measure of revenge in Saturday’s exhibition action.

The host put together a roster of players from Kazakhstan’s domestic championship, challenging the country’s emerging talent to make a case for inclusion in the senior national team. The roster was boosted by some young players from Barys, most notably Yegor Petukhov and Arkady Shestakov, who combined for Batyrlan Muratov’s goal in the second period. That strike cancelled out Russia’s opener, scored by Igor Rudenkov, and the third period saw the visitor once again hit the front only to be pegged back. Nikita Shashkov scored the second Russian goal, Sayan Daniyar replied on the power play.

In overtime, Russia secured the win thanks to a Vasily Glotov goal.