Nikita Chibrikov does not turn 18 until Tuesday — but the birthday party can start early for the SKA youngster after he continued a red-hot start to international hockey with his first goal for Team Russia. Chibrikov, who also collected his second assist of the Beijer Hockey Games in Malmo, found the Czech net late on to wrap up a 7-4 comeback victory. That secures top spot here and makes nine wins out of nine in this season’s Euro Hockey Tour as another experimental roster impressed in Sweden.

However, Sunday’s game proved to be a stern test against a Czech team that had twice lost after going to overtime in this weekend’s action. It took a recovery built on the efforts of Lokomotiv Yaroslavl team-mates Pavel Kraskovsky, Nikolai Kovalenko and Daniil Misyul to claw back a 1-3 deficit and get Igor Larionov’s team back on track in this game.

Russia began strongly and went ahead on a Zakhar Bardakov goal in the eighth minute, assisted by Chibrikov. But then the Czechs hit back. Michael Spacek tied the scores before the intermission and midway through the second stanza we saw two goals in just over a minute as Jakub Flek and Lukas Klok put Russia down by two. 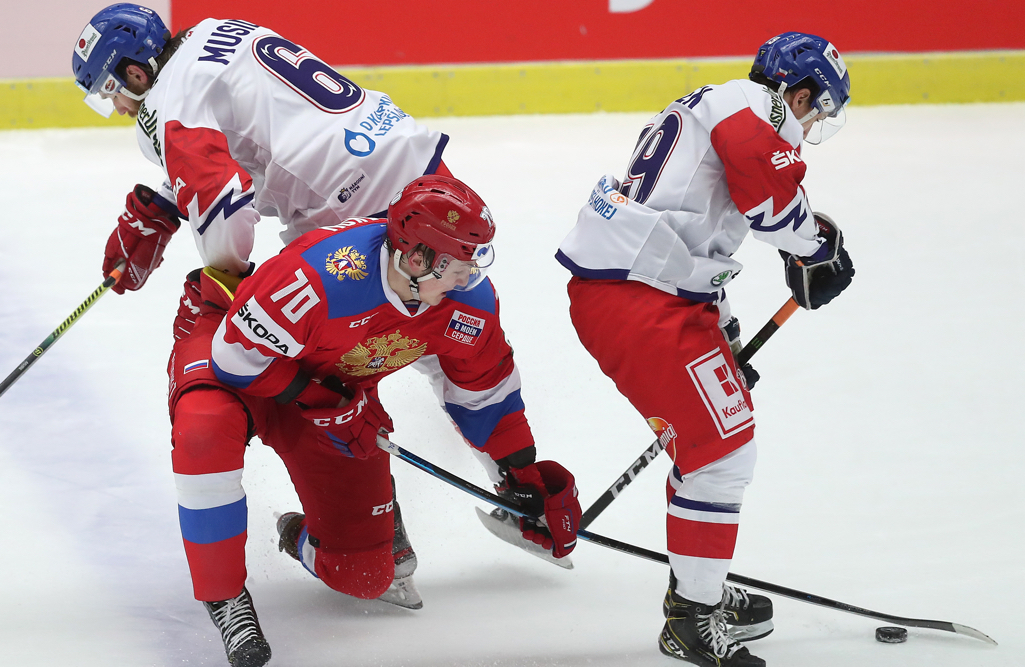 The response came from Yaroslavl. Lokomotiv’s Nikolai Kovalenko won back possession after Dominik Hrachovina failed to freeze the puck and he set up clubmate Pavel Kraskovsky for a power play goal late in the second period. Then, midway through the third, Kovalenko tied the scores with a goal of his own, assisted by another Lokomotiv youngster Daniil Misyul.

Misyul’s big day continued and the defenseman got the goal that put Russia back in front. Vasily Podkolzin assisted on that play, and a couple of minutes later the SKA youngster scored a fifth to give the Red Machine some breathing space. In the closing stages, the Czechs withdrew Hrachovina in search of a way back into the game, but the gambit backfired. Vladimir Butuzov scored an empty-netter — his second goal of the tournament — before Chibrikov added a seventh goal. The SKA forward celebrates his 18th birthday on Tuesday but, with a goal and two assists in this competition, his party can start early. The last minute saw David Tomasek score a penalty shot to give the Czechs a late consolation, but by that time the game and the tournament was already decided.

Russia’s tops the four-team group here with eight points, the Czechs are destined to finish last with two, and the evening game between Sweden and Finland will determine who takes second spot.

Igor Larionov, head coach, Russia
Kraskovsky’s goal [at the end of the second period] was important because I really didn’t want to go into the third period of a decisive game down 1-3. During the intermission we reminded everyone that 20 minutes was plenty of time to change the game. We talked about how the Czechs could defend strongly and create dangerous counterattacks. We made some adjustments, but you can’t force things; you need to play patiently, move the puck, and not get distracted by the game situation.

The guys took it all in the right way. The goals we scored in the third are a testimony to the character and depth on this team. In realty, we just got together, we didn’t play together for a month, but the guys still did great and managed to get the win.

Nikita Chibrikov, forward, Russia
I have every faith in my ability. This doesn’t happen easily, I had to work hard to make the national team and I put in some good performances in the KHL. I didn’t bring any nerves onto the ice, I went out there with confidence that I could do good things for the team. I can’t lie, I was a bit surprised to get a call to the senior national team, but I put a lot of work in, tried to progress my game and so I think I deserved the chance.

I’m happy with each of the points I scored. I’m a forward, my job is to score goals and make assists. People remember the goals more, but an assist is worth just as much. I guess this is a bit of a birthday present for me. But more importantly, it’s a reward for my parents, who always come to the games and support me.

Host finishes with a win

Sweden won this battle against its Nordic neighbor to secure second place behind the Russians in Malmo. The Finns also had a chance of taking second spot in the Beijer Hockey Games but needed a regulation time victory to get there.

Instead, after a goalless first period, Sweden took control with a pair of quick goals in the second. In the space of three minutes, Max Friberg and Jesper Sellgren put the Tre Kronor 2-0 up in the game. Filip Hallander added a third in the 41st minute.

Sweden’s win also takes Johan Garpenlov’s team level with the Czechs in the overall Eurotour standings. Both nations have 11 points, but neither can catch Russia’s runaway lead on 24.