Thursday’s action was not limited purely to the KHL. Russia had two international engagements, with the senior men’s team winning 3-2 against Finland at the start of the Swedish Hockey Games in Malmo and the ‘B’ team defeating Belarus 4-2 in Kazakhstan.

For the second time this season, Russia’s U20 head coach Igor Larionov takes charge of the national team at a Eurotour event — and once again his youngsters made a winning start. True, the roster that arrived in Malmo, Sweden, this week is rather older and more experienced than the fresh-faced junior team that represented the country in Helsinki back in November. However, once again the emphasis is on youth and potential, with the tournament serving as a try-out for many players looking to press their cases for a place on the World Championship roster in the spring.

One of the new faces was forward Nikita Chibrikov, who celebrates his 18th birthday next week. The youngster had played just 12 times in the KHL, picking up the bulk of his experience to date in the Junior Hockey League. When he stepped onto the ice today, aged 17 years, 11 months and 26 days. he became the third youngest player ever to represent Russia or the USSR, beaten only by Vladislav Tretiak and Alexander Ovechkin — two true legends of world hockey. 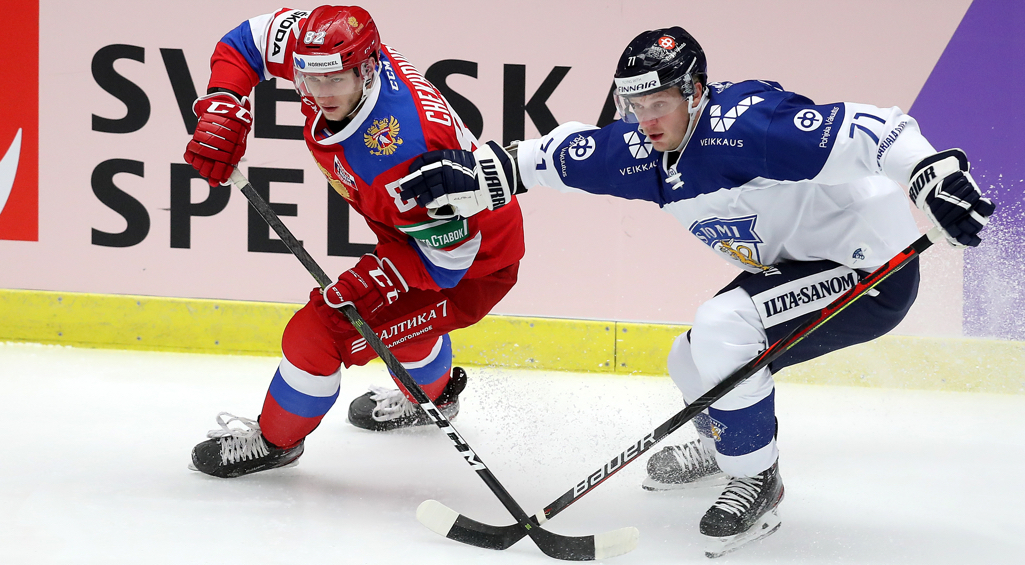 The first period had a strong Torpedo accent. The opening goal, in the 14th minute, was scored by Metallurg defenseman Artyom Minulin but the assists came from Nizhny Novgorod’s prolific pair of Ivan Chekhovich and Damir Zhafyarov. Late in the frame, the Torpedo connection worked again, with Chekhovich getting his first international goal off a pass from his clubmate. At the other end of the ice, Russia’s defense was impressive, with Finland limited to just one shot at Alexander Samonov while six more attempts were block by the Red Machine’s skaters.

However, the second period saw far more work for Samonov to do as the Finns livened up their play. The defense held up well under greater pressure, but an uncharacteristic error from Vasily Podkolzin cost Russia possession in a dangerous area and Jere Innala potted his first goal in senior international play.

Russia regained its two-goal advantage thanks to a Vladimir Butuzov effort. The 26-year-old Amur forward was making his first international appearance at any level and celebrated the occasion with a calm finish on the counter-attack after good work from Nikolai Kovalenko. That goal turned out to be the gamewinner, with Finland pushing until the very end and pulling one back in the final seconds. The scorer, Juuso Puustinen, is familiar to KHL followers from his performances for Neftekhimik and Sibir; one of the assists came from Sochi’s Jere Karjalainen.

Russia’s win came at a price, with 18-year-old SKA forward Marat Khusnutdinov suffering a shoulder injury at the end of the second period. He did not return to the game and, according to Larionov, faces an extended lay-off. 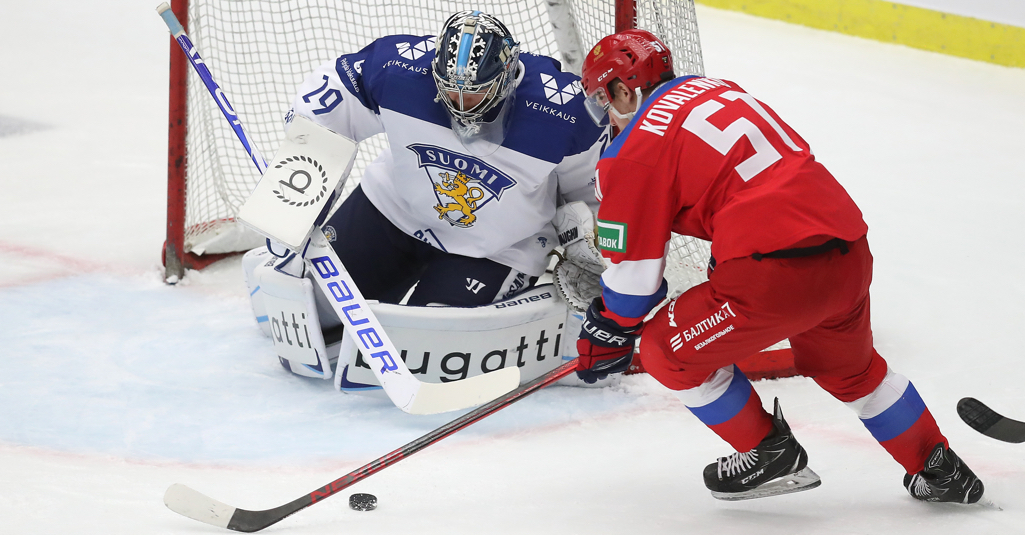 Igor Larionov, head coach, Team Russia
It wasn’t an easy game for several reasons. First, we had to adapt to an unusual rink. It takes time to work out where to go on offense, how to defend properly. The first match is always the hardest and we have a young team that only had a couple of days to practice together. But a win is a win.

Of course, I would like to see a better spectacle. From the bench we didn’t see a lot of errors but we’d like to see some more mature play from the defense and extra composure from the forwards, more control of the puck.

We lost Khusnutdinov, probably for a long time. We already looked at a few options, we have Rubtsov and Moyseyev who didn’t play today. We’ll have a look at our options and see how we can tweak the lines to get a better balance. We need creative centers to generate offense and help us play more calm, consistent hockey and ease the pressure in our zone.

Chibrikov’s debut was not the easiest game for a young guy against a far from straightforward opponent. He did his job, he might have scored. We want to give the youngsters a chance, they have an opportunity to prove themselves. I’m happy that he didn’t lose his way and he contributed to the team.

Damir Zhafyarov, captain, Russian
On this team we don’t make any distinction about how plays on which lines. Everyone here is a good, skilled player so it really doesn’t matter who you link up with. I don’t think my line was the best with the puck. All the guys created scoring chances, everyone worked well on defense. But there is still work for everyone to do.

For the captain, the most challenging time is the start of the game. And even then, there was no need for extra encouragement for anyone, everybody’s eyes were burning.

The senior team isn’t the only Russian roster in action this weekend. Russia’s ‘B’ team, under Oleg Bratash, is taking part in a mini-tournament in Kazakhstan. The host nation began with a 5-2 win over Belarus and, on Friday, Russia’s prospects took on the Belarusians.

The game started with Russia on top: Sibir defenseman Ilya Morozov opened the scoring early on and Alexei Toropchenko, currently with Kunlun Red Star, made it 2-0. Earlier, Toropchenko collected an assist on Morozov’s goal, while his own effort was set up by Nikita Guslistov who recently became the youngest player to captain a team in the KHL.

Belarus responded in the second period to tie the scores with a couple of quick goals from Dinamo Minsk duo Ivan Drozdov and Igor Martynov. However, Russia took the verdict thanks to the efforts of its Neftekhimik contingent: Marat Khairullin and Rafael Bikmullin scored two more goals, with clubmate Gleb Semyonov assisting on both plays.

Host nation Sweden made a winning start against the Czechs, but only after going to overtime. The teams previously met on the final day of the Channel 1 Cup in Moscow, and the Swedes suffered a 1-4 loss.

It looked like history might repeat itself when the Czechs made a fast start, going ahead on a Dominik Lakatos power play goal after five minutes. However, Nils Lundquist tied the scores in the first period and Pontus Holmberg’s goal gave the home team the lead in the second.

The Czech tied it up in the third but the game was decided in the extras when Red Wings prospect Albert Johansson, currently on loan at his hometown team in Farjestad, got the decisive goal.