In life, real estate and hockey, timing is everything. A team that peaks at the right moment can swiftly dethrone a steady contender. Metallurg Magnitogorsk found its stride with about twenty-five games left in the regular season, quickly ascending the Eastern Conference and recently blanking league leaders Ak Bars Kazan. Defenseman Philip Holm has equally timed the perfect entrance, joining Ilya Vorobyov’s defensive core in December as the team prepared to launch.

A native of Stockholm who began his career with the Djurgårdens IF U16s, Holm has logged time in Sweden, North America, Russia and Switzerland over the course of the last fifteen years. He made his KHL debut with Torpedo Nizhny Novgorod in 2018, stopping in Rockford, Illinois and Lausanne, Switzerland prior to his debut in Magnitogorsk.

We caught up on everything from Holm’s hockey globetrotting to Magnitka’s ascent, not to mention his new beagle named Siri (and no, she does not send text messages).

Gillian Kemmerer (GK): Metallurg moved into contention at exactly the right time. What clicked for you?

Philip Holm (PH): It’s hard because I have only been here for a bit over two months, so it hasn’t been the longest season for me. But I think over the last month and a half or so, we realized as a team how we win games and really stuck to our style. Just play the team game, every game. Find a way to win against most of the good teams. Maybe we don’t have the best team night after night, but we always try to find a way to win—and we’ve been doing that a lot lately.

GK: What will you need to focus on if you plan to maintain this momentum in the postseason?

GK: Your upswing seems to have coincided with the arrival of assistant coach Mike Pelino, who won two Gagarin Cups with the organization.

PH: Yeah, for sure. I think he has contributed a lot. He's been in this league before, been with this team when it won the trophy. You can see that he knows a lot about hockey. And I think he just brings a lot of positivity on the bench. Outside of the rink, he keeps the guys happy and he knows what he's doing—with his tips and things that we can do to make us a better hockey team. It has been big having him back. 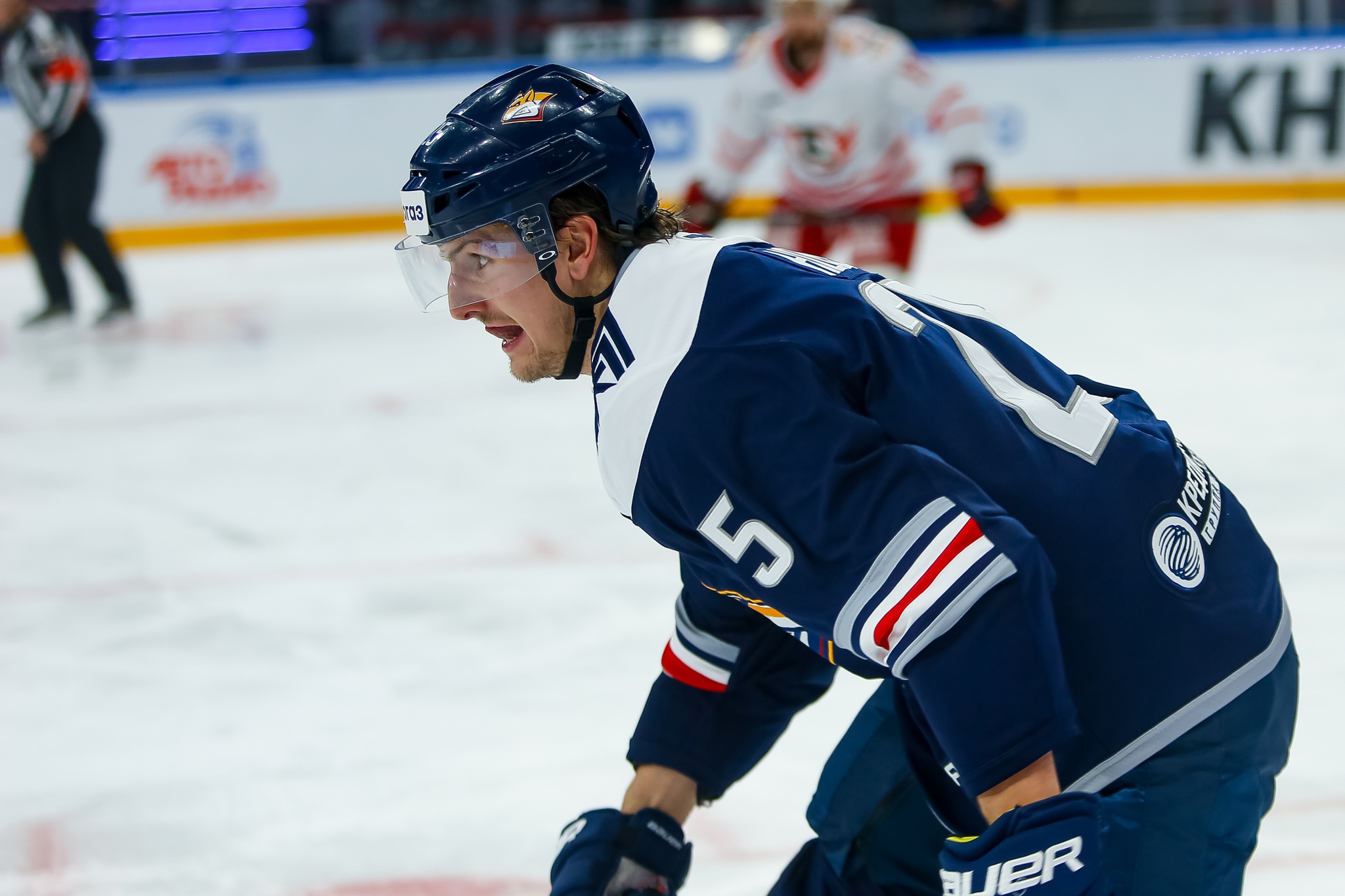 GK: How would you describe head coach Ilya Vorobyov?

PH: I think it's a great mix. All of the coaches have a different perspective. We have [Fredrik] Stillman as the D coach, a Swedish guy. So I think the whole coaching staff, with the goalie coach and all of the assistant coaches and head coach, it's a good mix. They find a way to make the best situation for us as players to play the game.

[Stillman] wants a lot of the defensemen to play with the puck, maintain possession. Like I said before, we want to be the team that controls the game. So he wants us defensemen to keep the puck if we have the chance. I think that style of play suits me well.

GK: What can you tell us about league legend Sergei Mozyakin?

PH: Every game, every night, you can see that he's a special player. He's been in this league for so long. He's a top scorer. He will always do something special, and every time you see him, he does something exciting and fun. Off the ice, he’s a really good guy too. Positive, jokes around, just a fun guy to have in the locker room.

GK: How would you contrast your two months in Magnitogorsk with your previous experience at Torpedo?

PH: In Torpedo, we were pretty aggressive—we wanted to play offensive hockey. So there, we also played a lot with the puck and were aggressive all over the ice. I would say that this time around [in Magnitogorsk], we have more depth in the team. We have a lot of lines that can contribute every night. I would say maybe the biggest difference between this year and [the season in Nizhny] is depth.

GK: In a similar vein, what differences have you noted across the hockey countries where you’ve played? What brought you back to the K?

PH: I think that here in Russia, it's a better league. There are better players with more skill. In Sweden, it's maybe a little bit more tactical. It's a lot about speed.

[In the AHL], with the small ice surface—it’s coming here to the KHL now. A lot of teams are changing the size of the rink. You often don't have as much time as you were used to before. So always as a defensemen, I try to make quick, easy plays from down low and join the rush when I have the chance. A lot of how you get chances as a defenseman is trying to join the rush and make quick plays.

I was in Switzerland at the end of last year. Playing [in Russia] before with Torpedo, it was a fun league to play in. It was a lot of good players, and I liked the style of the hockey. I would say that it’s the second-best league in the world. So of course you always want to play at the highest level. It felt like a good step for me to come back this year. 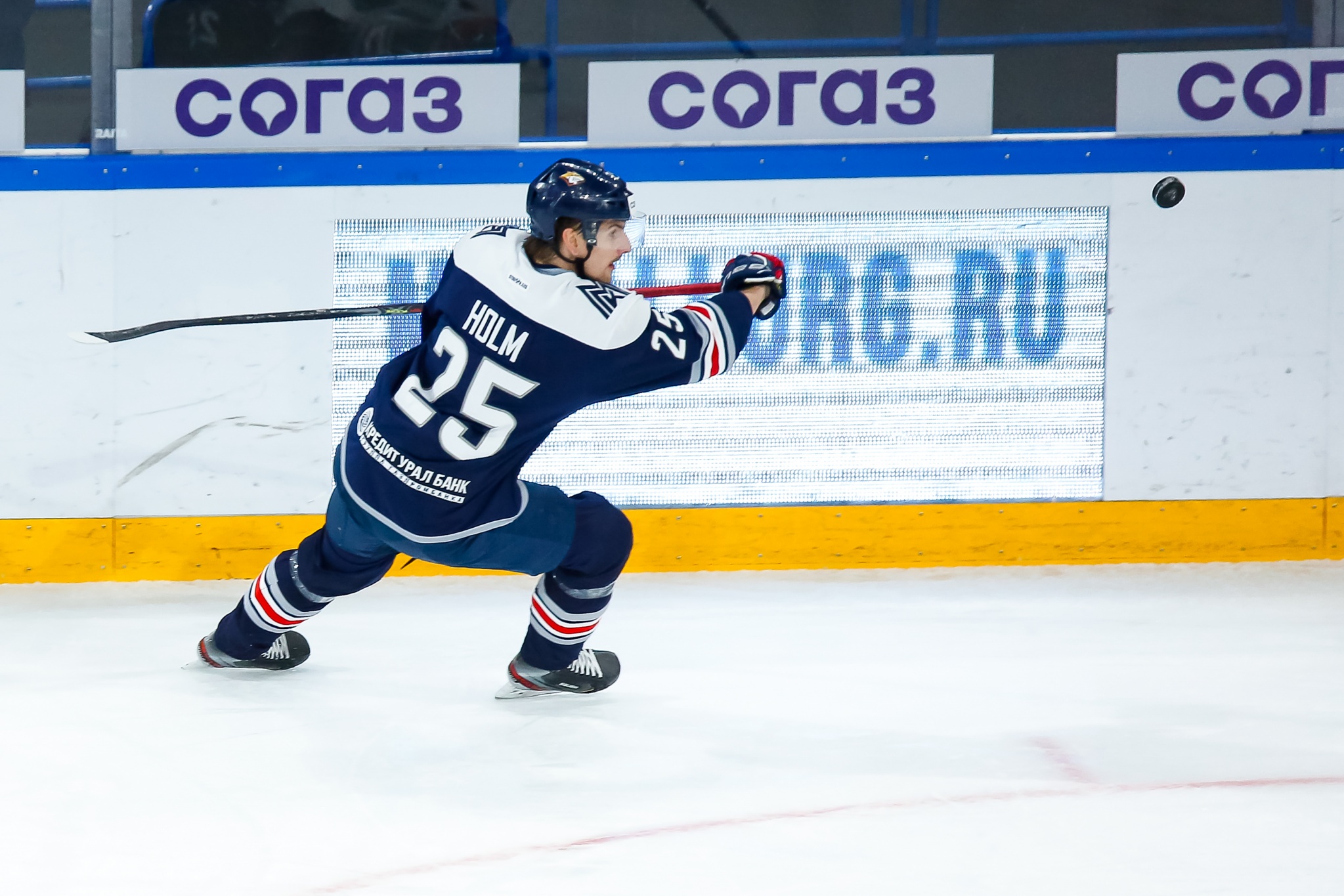 GK: You won Worlds in 2017. What did you take from that experience, and how do you rate Sweden’s development system in recent years?

PH: Playing for your National Team, of course, is always a proud moment. I remember that it was a long journey. We had a couple of weeks before a lot of the players got together, and then we had a lot of NHL guys coming in. It's an amazing feeling to play for your country, and then in the end, to grab the gold. It was just a really proud moment. It was an awesome, awesome feeling.

For the last couple of years in Sweden, it feels like with every draft there are young guys coming up. It seems like the development has been really good. We are always a competitive team when it come to the World Championships versus great players from all over the world.

GK: What are your earliest memories of hockey?

PH: I remember that we had an older cousin who was playing hockey. My brother and I would go to watch him and then get out on the ice. I would come down when my brother was playing. My earliest memories would be joining my brother's practices. From the beginning, it was the thing I wanted to do most—just play hockey. I was fortunate enough to call hockey my job.

GK: Your brother Joachim is also a defenseman. Was he more of a mentor or friendly rival?

PH: I would say it was more of a mentorship role. Of course, I looked up to him. He's three years older, and I would watch his games and stuff like that. So when we got older, we played maybe two games against each other.

GK: Did you ever wind up as a D pairing?

PH: No, we never played in the same team. We played against each other, I think one or two games when I was younger. It was just fun to watch him. It must have been weird for my Mom and Dad to be in the stands—they didn't know what team to cheer for! I think they just wanted both of us to play well, and it didn't really matter what team won.

GK: What is the best locker room speech you’ve gotten?

PH: That’s a good question…locker room speech…when I was playing in Sweden, we had some players that had been together for a long time. I remember when we played in Djurgårdens, we were down in the second league, qualifying to move up. We had some strong leaders on the team and they would usually give good speeches to get the guys going before the games. So that's probably my number one memory.

GK: Tell me about the funniest prank that you've seen pulled on or off the ice.

PH: It was a long time ago—maybe seven, eight years ago or something like that. I remember a guy had an interview once because he scored the game-winning goal, and the whole team came with whipped cream and just threw it in his face during the interview. He was on the ice doing some TV or video. I remember he was not happy!

GK: That is savage after he won the game for you! What is one lesson that you'll take from hockey after your career is over?

PH: You always say this when you are younger, but I think it’s the most important: try to have fun all of the time. It’s hard to enjoy yourself when the team is losing, or you're not doing great as an individual, or stuff like that. But you started playing when you were a kid for a reason. It was the thing you loved the most when you were young. So always try to find the fun and be positive, even when you’re going through hard or tough times.

PH: I play a lot of golf during the summer. Like most guys, I think it's a nice way to relax and think of something else. Go out with friends. We got a beagle a little bit over a year ago, so that's been keeping me up at night. We spend a lot of time with her ,too.

GK: Does your phone ever answer when you talk to the dog? Or was that the point?

PH: It actually happened once, but that's what everyone asks every time. Me and my girlfriend were thinking of different names. We just liked that one from the start. We thought it was a little bit funny since everyone has an iPhone and Siri…so yeah. That was a little bit of the reason too.

GK: The road trips tend to be pretty long in the KHL. What do you do on the plane to keep yourself occupied?

PH: I watch a lot of TV shows, movies. The flights feel shorter when you have something to watch, so I always have my iPad with me. Right now, I'm watching The Americans. I'm on season three, I think.

PH: I like techno music a lot. That's what keeps me pumped up before a game. So if I had to choose one song, maybe Best of Me by ARTBAT. It's pretty new, I think. They have a couple of good songs.