KHL.ru keeps on talking about the league’s most talented young players. Today, the talk is about Zakhar Bardakov, one of the Russian national team’s surprises at the recent World Juniors in Canada.

Zakhar Bardakov was born in Seversk, a Siberian town some 180 miles to the North East of Novosibirsk. He was just five when he had his first contact with hockey as his parents brought him to the local team Smena. “I loved hockey at first sight,” Bardakov said. “I learned to skate very early. Until I was seven, I was also a swimmer, but then I needed to choose. And I picked hockey.”

Bardakov had a short stay in his hometown. Two years later, he moved to Berdsk, about 30 miles from Novosibirsk. The local coaches played him as a forward right away, just as he always dreamed. His enormous talent was evident right away — in his first two years, he scored 71 goals. Considering his stats, Bardakov had to move out of his comfort zone and get to a place with more prospects.

“My parents were the first to understand the situation, and I’ll be forever grateful to them for that,” the forward explained. “Even if I was just 12, I moved to St. Petersburg to play for the Silver Lions. On the one hand, it was a risky move for a 12-years-old guy to move to the other end of the country on his own. On the other hand, in St. Petersburg, you’ve got the best conditions to develop and improve, and I was used to be alone since I was nine when I moved to Berdsk. My parents visited me once a month.”

In the next season, Zakhar moved to another team in St. Petersburg, SKA-Varyags. Once again, it was evident that he was good enough to play in Russia’s elite circles. In the St. Petersburg championship, Bardakov regularly tallied 50 goals a season. When he turned 14, his wanderings ended. In 2015, two offers were on Bardakov’s table: one from Ak Bars and one from Vityaz.

“I picked Vityaz because they play in a better league,” Bardakov explained. “Ak Bars has an excellent hockey program, but they have almost no rivals in the Volga region. In the Moscow championship, each game is like playing the finals.” In Vityaz, Bardakov started playing under Igor Dekin, who also trained his WJC teammates Vasily Podkolzin and Ilya Safonov.

“We didn’t have the best team with Vityaz,” the coach recalls. “However, the conditions were good. We had a mass tryout, and Zakhar was one of the best players. You could see his talent right away, but he needed some time to adapt to his new reality.”

In his first seasons with Vityaz, Bardakov’s numbers had a steep decline. If earlier he could net 50 a season, in the Moscow Region, he only had 13-14. However, facing teams like CSKA, Lokomotiv, and Dynamo day in and day out, he improved significantly. And he also changed his attitude towards hockey.

“Initially, Zakhar spent a lot of time on many different things,” the coach recalls. “Hockey was more entertainment for him. We talked a lot with his parents to find the best approach and strategy. We had to tell him that he was something assimilable to the foreigners in the higher leagues, and thus he would have been sent home if he didn’t start producing. Of course, also the natural growing process had its role. Once he understood that he needed to treat hockey as his life profession, he started progressing day after day.” 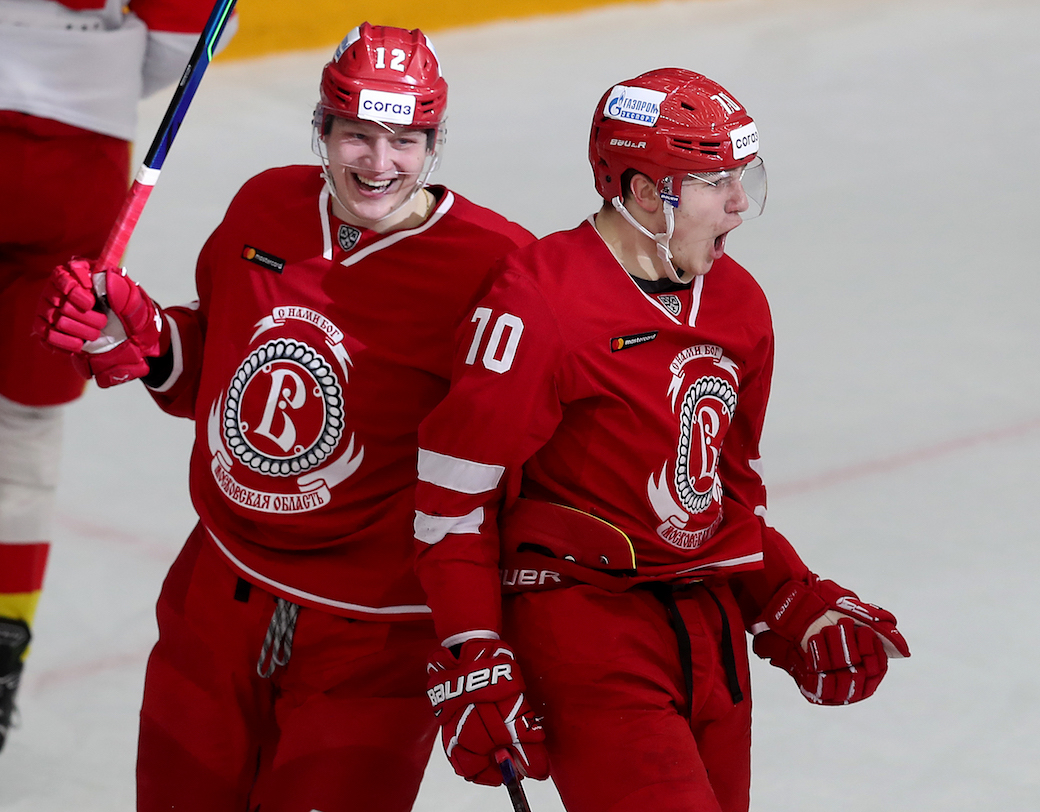 Ranking up with Vityaz

Finally, in his last year before the JHL, Bardakov had more than a point per game, amassing 28 (13+15) in 23 games. He had no doubts that he would then rank up to the Junior Hockey League. Watching the stats from his first season with the Vityaz’s junior team, however, it’s not much the amassed points that stand out (19 goals and 35 points), but the high number of penalty minutes — 122.

“I couldn’t say that he used to fight a lot back in kids’ hockey,” Dekin says. “However, I know why he amassed so many PIMs. He’s a stand-up kid. He will step up for anything that he considers wrong.”

“Strength is important at the JHL level,” Bardakov says. “A lot of players are north of 200 pounds; you need to play harder and more physically.”

Naturally, Bardakov’s debut was positively judged by Vityaz’s senior team’s staff. He spent the 2019 preseason with the big guys but failed to have his KHL debut. However, he scored 32 (17+15) points with a career-high 149 PIMs.

Representing Russia on the international stage

“My first three years with Vityaz were hard, but I also received my first call from the national team,” Zakhar says. “However, right after it, I badly injured my shoulder. I needed to sit for a long time and to renounce my debut with the national team. I was very upset.” As a result, Bardakov only played three games in a preparation tournament with the U18 national team.

In November, Bardakov was called to the Russian national team to represent the country at the Finnish stage of the Euro Hockey Tour, the Karjala Cup. Having your debut with the national team directly with the senior selection isn’t something that happens often. Then, Bardakov traveled with the team to the IIHF World Juniors in Canada, where the Russians concluded in fourth place. 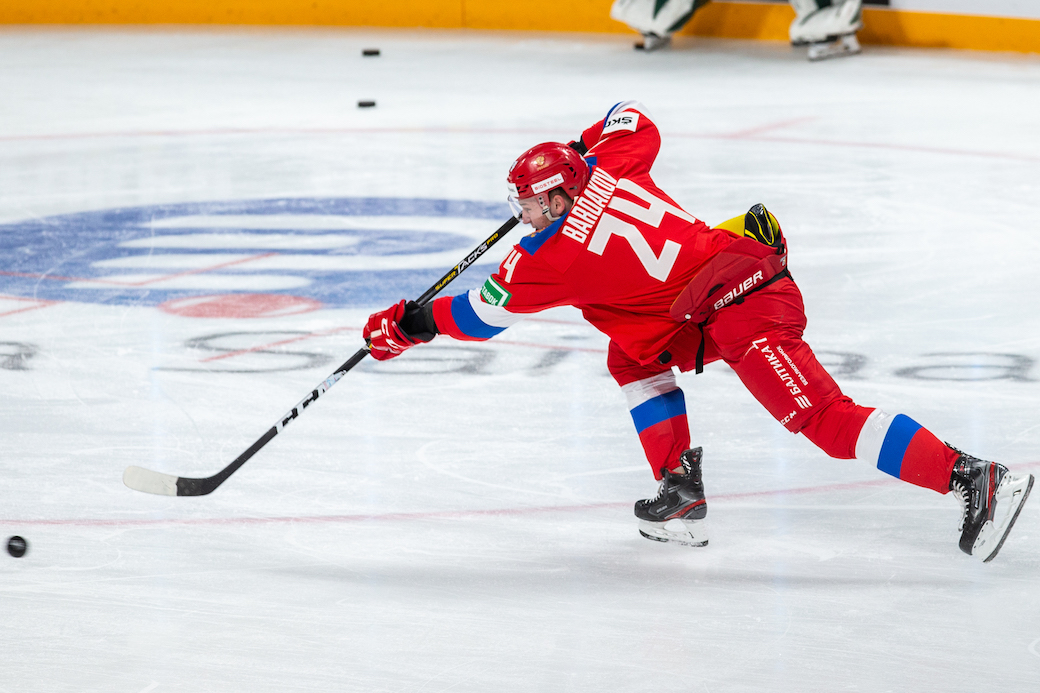 “Some said that we lacked freshness,” Bardakov tries to explain the team’s under-the-expectations result. “However, I feel like I was in great shape. We lacked emotions. After the Karjala Cup, we had two months of repetitive routine. At first, we sit in Novogorsk; then we moved to Canada — all in the bubble. I wouldn’t wish that on anybody. We didn’t have enough room, and the only distraction was table tennis in front of the canteen and videogames.”

Zakhar had his KHL debut in the season’s inaugural game between Vityaz and Ak Bars. Vityaz won the game, and Bardakov wasn’t merely the team’s thirteenth forward but had a full-time spot in the fourth line.

“I can’t say that I was anxious,” Bardakov recalls. “I knew what was in front of me. The preseason was a great way to get ready. Naturally, in the KHL, the game is faster, and there are better players than in the JHL. However, my adaptation was relatively fast.” 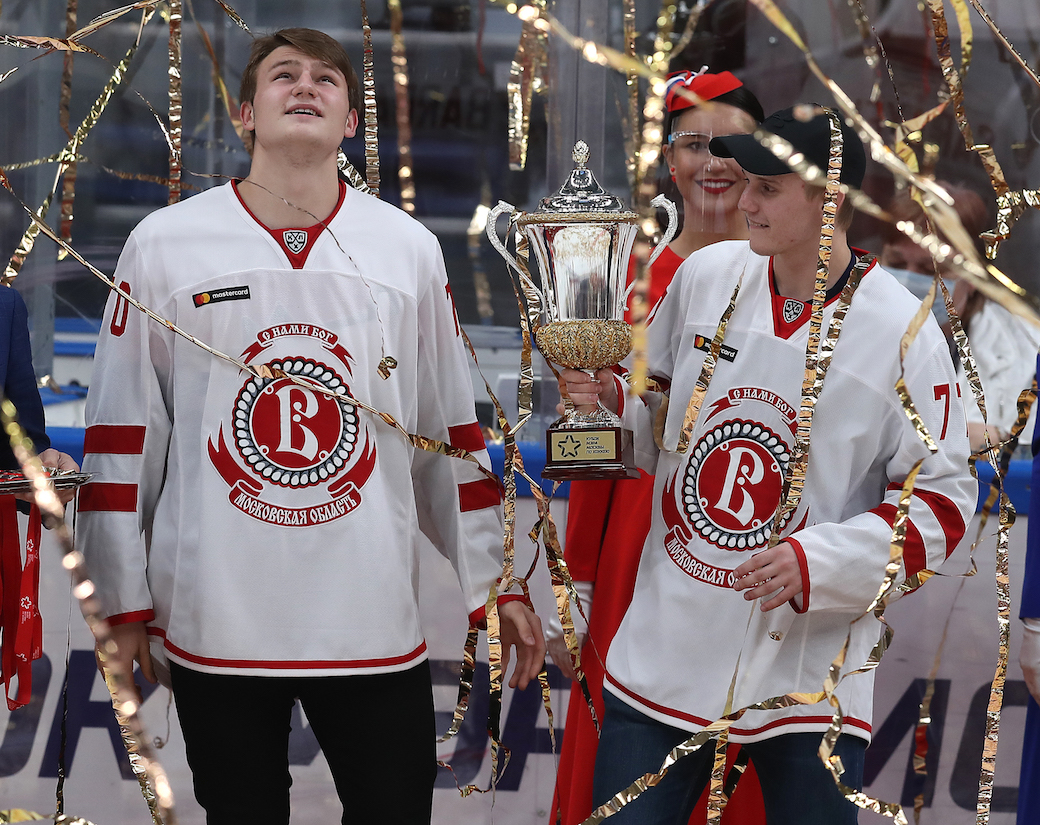 In November’s tail, Bardakov had a good series. He had points in two consecutive games against Dinamo Minsk and Jokerit. And he also opened his account in the KHL, netting one to the Finnish franchise.

“Today, I’m working with another team,” Dikin explains. “However, being based in the Moscow Region, I regularly meet Zakhar. I used to visit his JHL games. I’m excited that my former players, Zakhar, Podkolzin, and Safonov — all play more and more games at the highest level.”