In this exclusive interview, Dinamo Minsk’s top scorer talked about the successful season he’s having in Belarus, his current and past teammates, the COVID-19 challenges, and much more.

Shane Prince, oddly enough, scored four goals to Dinamo Minsk in a game in his first preseason in Europe back in 2018. “Yeah, I didn’t know what to expect back then,” Prince told KHL.ru. “It was my first time overseas, and then, going into a tournament with a Swiss team playing against KHL teams, and there was a bunch of good teams there. And I was just trying to play my hardest. And it was a good start, especially for the first time against KHL teams. I had a lot of fun at that tournament.”

Having such a performance against your future team makes it just more interesting, and Prince knows it. “I remember that was one of those games where everything went right. I said that I had a lot of fun, and it’s a little weird ending up here a couple of years later,” he explained.

Differently from this year, however, last season was a tough one for Minsk. “I hate even bringing it up last year,” he admits. “But it was tough for everyone. Obviously, not what we wanted. We struggled all year, and there was no fun involved last year. It was a lot of miserable and unhappy days. And I think that it kind of propelled us into this season. The guys that returned didn’t want that to happen again. And we also got a lot of new guys, a lot of young guys that are playing well and hard for the team. This year we have a much better team, both on and off the ice.”

The 2019-2020 season was a rocky one for Minsk. The Belarusian side ended up in the last place in the Western Conference’s standings, getting only 11 Ws. However, the experience was a precious one for Prince. “As I said, we have a whole different team this year and a different mentality,” he said. “And if anything, I think last year helped us this year, helped our mental things because it was so bad last year. We’re doing everything we cannot let that happen again. So we’ve had a great season so far. Obviously, we have a lot of important guys out of the lineup right now because of injuries. And, you know, that’ll make things tougher for us for sure. But that’s no excuse. You know, to go in and lose games, you still need to get results. And, you know, even with a bunch of guys out, we still expect to win. So that’s our goal: to go in the playoffs.”

And having a more robust lineup can make things easier in reaching such goals. “It’s huge, especially this year with the COVID-19 outbreak. We needed our younger guys and whoever was up next to come into the lineup and do well. And I think we’ve had that this year for the most part. The guys are playing hard and know their role as well. When you have that, that creates a good team. I’m happy for the younger guys to come in and be a part of a winning team in the KHL. So it’s been great. We’ve got a great group of guys, and everyone’s doing a good job.”

Moreover, after Yegor Sharangovich left the team, Shane Prince has been promoted to the team’s captain. “Wearing the ’C’ is an honor, obviously,” the forward said. “You take on a lot more responsibility, making sure the team is ready. And, especially with our group, we’re so young that the older, experienced guys need to step up. And I like leading by example. So it’s you know, I just trying to be the same player, the same person, and just know that, you know, the extra responsibility and making sure the team is ready. And, you know, I think I’ve tried to do my best, and for the most part, we’ve gotten some good results.”

If compared to last year, Prince scored more goals from the slot this time around. “You know, I try hard, and not every goal is going to be pretty,” he explained. “most of the goals at this level are scored or somewhere around the net, whether it’s tips or rebounds. Getting a good body position and getting those pucks; that’s how most of the goals are scored in pro hockey. So I try and get myself there as much as possible and try always to have a good body position and obviously have a good stick and try to get your stick on everything and playing in front on the net on powerplays. And we’ve had a pretty strong power play in the last six weeks or so. Many of the goals come from that. You learn that when you do this for a long time, you learn by seeing other players and how they succeed.” 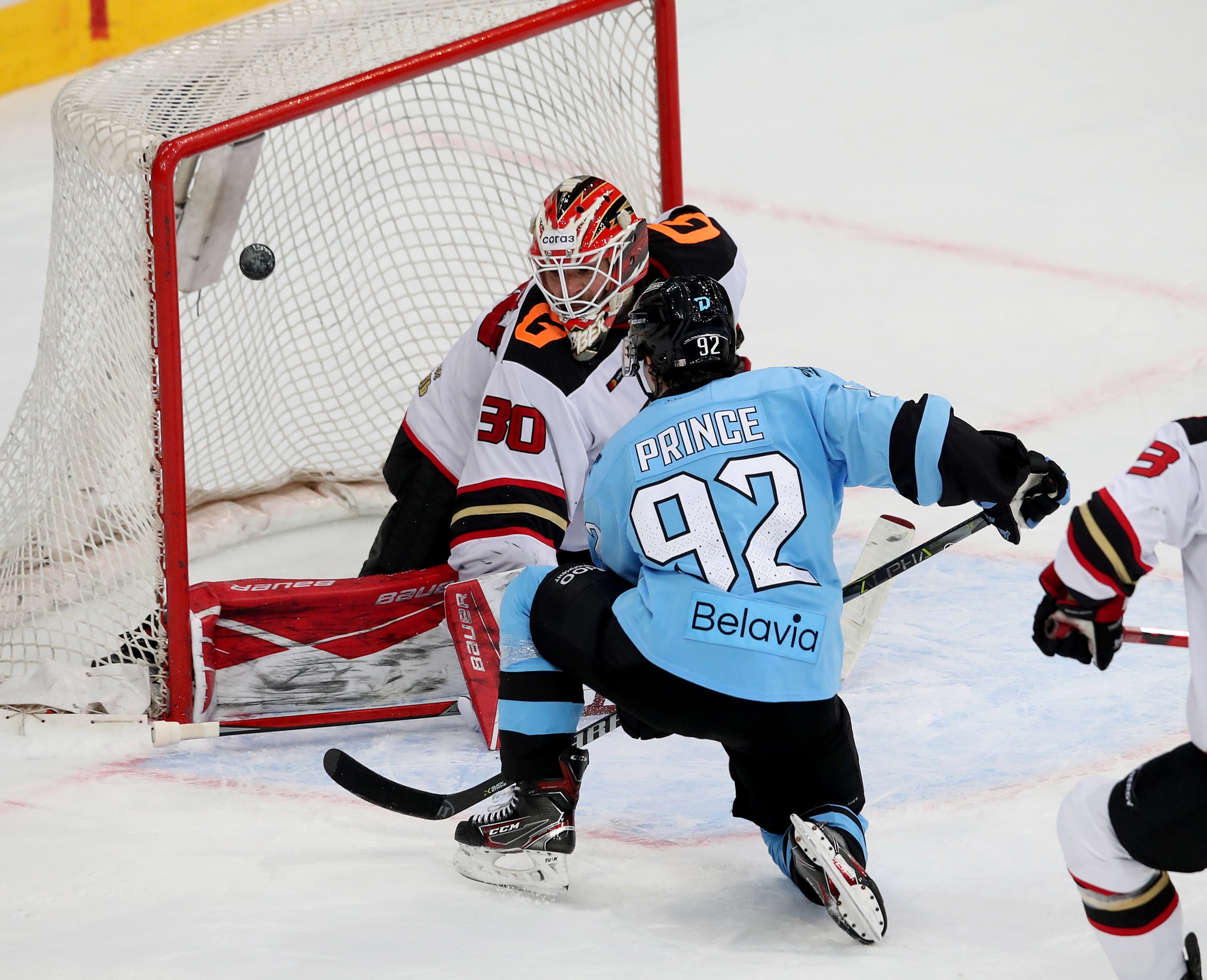 “Grabovsky loves the game, and he wants to play”

One of this year’s best player is Ak Bars’ Stephane Da Costa. Prince is familiar with him. “When we play each other, we say ’Hi’ and chat for a little bit. He was my roommate in my first year as a professional in Binghamton for Ottawa’s farm team. At that time, we were roommates. He’s a good guy and an outstanding player. So he’s had a lot of success in the KHL, and it’s fun to be over here playing against him now.” Another player Prince played with is Ryan Murphy, who also lined up for Minsk this season. “Yeah, I know it’s pretty crazy, but it’s a great league, and obviously in North America, it’s good hockey, too, and a lot of guys end up over here eventually in this league. The KHL it’s not an easy league to stick in. And it’s hard to keep your job. You need to produce and be one of the best players every night. So, that’s why a lot of good players end up over here. And, you know, the best ones will find a way to stick.”

One of this years’ coaches in Minsk is Mikhail Grabovsky — a familiar face at both ends of the Ocean. “Yeah, he’s still has a player’s mind,” Prince says. “He loves the game, and he wants to play. It’s unfortunate what happened to him. You can tell how bad he wants to play still. But coaching gives him an outlet to stay in the game and stay involved. He loves being at the rink every day and is he’s a great guy. I was with him in New York, too. We play together, but he was mainly injured at the time. But I’ve known him for four or five years now. I’m happy to have him as my coach because we see the game in a very similar way. So it’s nice to have him help me every day and get better.”

This year’s championship has been a tough one also because of the different challenges imposed by the COVID-19 outbreak. “The situation in Belarus is good. I had a baby this year, and she was born in Belarus, which was cool. But we haven’t had any of our families come over yet just because of the virus and stuff and just want to be safe. So we’ll save that for when we get back home after the season. We’ve been lucky. I mean, if we were in Russia, I think there would be a little harder. I know some guys have had their families out all year, and that’s really hard. I’m blessed and lucky to be in Belarus and have my family with me.”

The competition in the KHL is even tighter this season after the league imposed a salary cap. Things have evened up, and Prince enjoys that. “The KHL is a great league every year; every team is good,” he said. “But this year especially, it’s a lot tighter. For example, have a look at the playoff race. There are so many teams that can move around these last 15 games and be in or out of playoffs. So our conference is really competitive. I mean, it’s going to go right down to the wire, I’m sure, to see who’s seated where and who’s in the playoffs and who’s not. But that’s fun. I mean, last year, the last 15 games, we were playing for nothing. It’s fun to be in the mix this year and in a good spot right now. We have to make sure we finish strong, especially when the team jumps to the playoff places.”

Being from Buffalo, it’s hardly surprising discovering that Prince is a big football fan. “I’m a big fan for sure. We hadn’t had much to cheer about for the last 10 to 15 years. When I was really young, that’s when they were good. They went to the Super Bowl a few times, but they never won it. But now, the future looks good. They got a good young quarterback, and the team’s looking pretty solid. However, I never played football. But I’ve been a Bills fan my whole life. So it’s exciting to watch them in the playoffs. And I think they have a real shot this year to win it. In our locker room, we’ve got a few guys that follow all sports. I’m one of them. I follow everything. I know pretty much everything that’s going on and all the leaks. And, you know, I just enjoy all sports. It’s good to watch. And we definitely talk about it each day, like what’s going on, what players are going where, all that type of stuff. Yeah, we definitely talk about it.”