Day two of the Channel 1 Cup saw Russia move out in front. Valery Bragin’s men won 4-1 against the Czechs, while Sweden bounced back from Thursday’s shoot-out loss to defeat the Finns by the same scoreline.

Maxim Mamin scored twice as Russia made it two wins from two at the Channel 1 Cup and extended its overall lead in the Euro Hockey Tour standings. Now the team is poised to match the success of Russia’s juniors, who were victorious in Helsinki last month in the opening round of international action.

Head coach Valery Bragin made changes following the shoot-out win over Sweden on Thursday. Only the first line was untouched as Dmitry Samorukov replaced Danila Galenyuk on the second line, Sergei Tolchinsky took Yegor Korshkov’s place on the third as he made his international debut, and Viktor Antipin was called in as the seventh defenseman.

The Czechs got the first opportunity of the game when Dmitry Yudin fouled Lukas Sedlak and went to the box, but apart from a Lukas Radil shot that flashed over the top there was little danger from the subsequent power play. Initially, though, Russia was having a hard time imposing itself on the game with the visitor pressing the puck and making it difficult to deliver the traditional passing play that Russia so enjoys. However, a face-off in Czech territory changed all that. Russia won possession, Anton Burdasov got the puck on the blue line and stepped forward to fire his first senior international goal past Traktor’s Roman Will. The SKA man opened his account in his 29th game for the Red Machine.

A few minutes later, another attacking face-off saw Russia double its lead. This time Andrei Kuzmenko received the pass, got away from the defenseman and put away a wrister from a central position. Only the post prevented a third goal as a home power play saw Igor Ozhiganov going close. But the next goal was scored by the Czechs, with Sedlak racing into the zone and getting his shot off despite the attentions of Alexei Marchenko.

The Czechs began the second period on the power play but could not find an equalizer and the score stayed at 2-1 until the intermission. Alexander Samonov was the busier of the two goalies, especially towards the end of the session, but Russia preserved its lead.

Then, at the start of the third, Mamin extended it. The CSKA man got to the slot and Andrei Chibisov picked him out with a pass from the boards. Denis Zernov had a chance to make it 4-1, initially with a one-on-one break, then with a penalty shot after the first ended in a foul. However, Roman Will won the duel and kept the Czechs in contention until Mamin scored into an empty net to complete the scoring. Russia once again switched to playing with three lines in the third period, and Vladimir Tkachyov was not involved at all in the final frame. However, as Bragin explained, this was simply a matter of conserving the energies of his players rather than any implied criticism of the forward’s play. 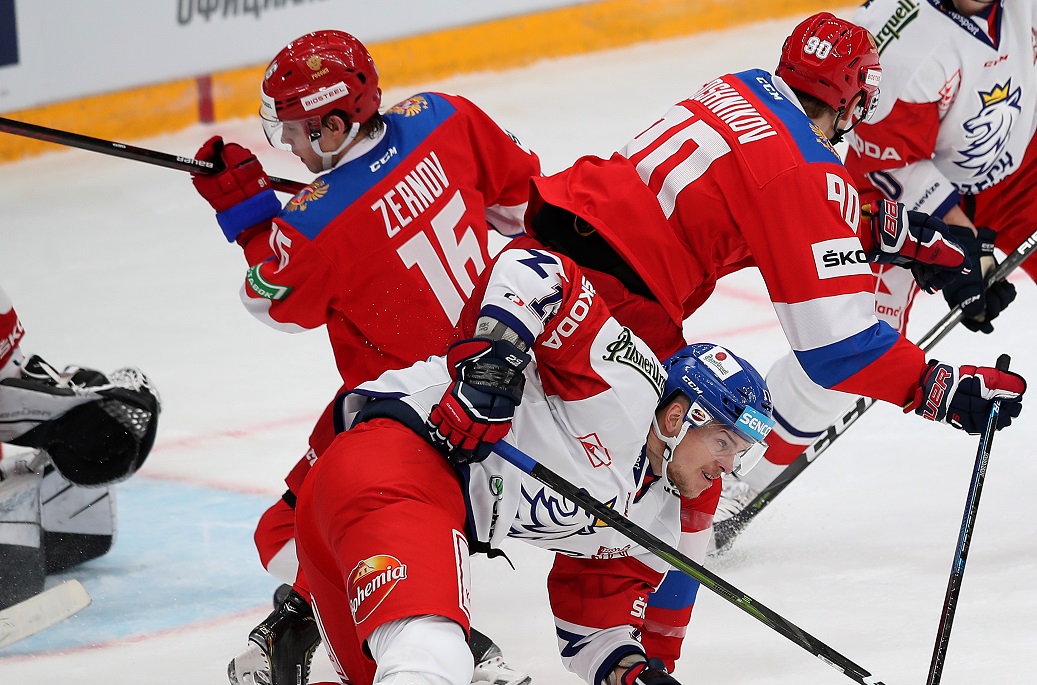 ‘Playing my first game [for the national team] was a colossal emotion. I always dreamed of playing for my country. I wouldn’t say I was nervous, but maybe I was a bit rushed when I had chances, I might have played a bit differently with my club. I tried to do my bit on defense and I think our line played quite well.

‘Nikita Soshnikov is a classy player, a master. It’s easy to play with him. In the first period maybe I was still getting used to him but our mutual understanding quickly improved.

‘I feel progress in my game, I feel like I’m becoming a different player and that pushes me even more. You can’t stop, you have to keep striving and improving. I want to continue my work and of course I want to go to the World Championship.’

‘I wasn’t even thinking about my goals, I just wanted to do a good job for the team. It’s great to make a contribution, I’m trying to justify their faith in me. At SKA I’ve played a couple of times with Morozov and Vanya helps me a lot, we have a good chemistry, encourage each other.

‘Anton Burdasov is a natural goal scorer. His first goal in international hockey was only ever a matter of time. Congratulations to him, I’m sure there’s more to come.’

Two goals from Dynamo Moscow’s Oscar Lindberg led Sweden to victory in this Nordic derby. Finland was left to rue the ineffectiveness of its power play, failing to take four different chances before the Swedes opened the scoring midway through the game.

The first period began with the Tre Kronor taking two penalties in quick succession. However, the Finns could not find a way past Anders Lindback and the game was goalless at the intermission despite the Leijonat’s clear advantage on the shot count.

The second session began in similar vein, but once Sweden got its first power play of the game it quickly showed how to take advantage. Lindberg stuffed the puck home from close range to open the scoring. Late in the frame, he doubled his team’s lead when he arrived at the back door to convert a dish from Pontus Aberg.

Sweden added a third before, finally, Finland’s power play paid off in the 57th minute. But there was no late drama: Mario Kempe scored into an empty net to seal his country’s first win over the Finns at the Channel 1 Cup since 2016.