“It was an honor to get killed by you.”

No, this is not a line from Braveheart that you’ve simply forgotten, nor the last uttered words of a slain samurai. Odysseus did not make this remark, and Napoleon had no such sentiment for General Kutuzov upon his retreat. These are the words Semyon Der-Arguchintsev shared with Pavel Datsyuk after having the wind knocked out of him in the third period of Torpedo’s clash with Avtomobilist. It is one thing to play against your hockey idol, but to sustain a knock from the Magic Man? A whole other religious experience entirely. “It was still a cool moment…for him to hit me,” Der-Arguchintsev shared, a dreaminess in his voice that you might have mistaken for a pleasant experience.

A native Muscovite who began his youth career with the historic Krylya Sovetov (Wings of the Soviets), Der-Arguchintsev migrated to Ontario at the age of fourteen to play for the Canadian International Hockey Academy, and later, the OHL. The talented forward was drafted 76th overall by the Toronto Maple Leafs in 2018, an experience he shared with childhood friend and teammate Alexander Romanov. As global hockey schedules were shuffled due to the COVID-19 pandemic, Der-Arguchintsev joined Torpedo Nizhny Novgorod on loan in October.

From his first brush with Datsyuk to a surprise cameo from Semyon’s brother—former KHLer Alexander Fedoseyev—I caught up with Der-Arguchintsev from his Moscow home, where he is currently recovering from an injury.

Gillian Kemmerer (GK): What brought you to Nizhny Novgorod in the first place?

Semyon Der-Arguchintsev (SD): We—my agent and I—decided that it would be good for me, for my development, to play right now before the season starts, or even for the whole [KHL] season. We're not sure yet, because we don't know when everything will start again in North America. We decided that Torpedo was going to be a good spot for me because I talked to the coach [Dave Nemirovsky] before I came there. They've been great to me since I arrived, so it has been a nice opportunity.

GK: Nemirovsky seems like a good fit for you—a Canadian of Russian descent who spent time in both hockey cultures. Do you sense the North American preference in his style, as opposed to other coaches in the KHL?

SD: He’s great. Every coach there is great. I don't know, I think it's the best spot for me in KHL, for sure. They have been treating me really well, and giving me opportunities to be successful on the ice. I can't thank them enough for that. They've been supporting me and I'm really happy to be on their team.

[Nemirovsky] plays skilled hockey—the type of hockey that I like to play, and it fits my style. It’s more about puck possession. He likes to create chances, and to have the puck more than the opposing team. It has been a pretty easy adjustment for me to make because he plays more North American-style hockey. He likes to play with skill. When you play against some of the other teams in Russia, they try to keep it simple. They play defensively. Obviously, it’s a little bit of adjustment in terms of some details, but not much. It's just good hockey here.

GK: Torpedo has collected some high-profile Russian prospects as well as North American imports. Do you gravitate toward any specific group?

SD: I obviously enjoy my linemates, but in the team, it's a great atmosphere in the dressing room. They've got some North American guys who are great. I've been trying to talk to them a lot. They are all really nice guys. For me, it's also pretty nice to have someone from North America too.

GK: You haven’t spent much time in the KHL so far, but how would you categorize Torpedo’s season? Do any games stick out?

SD: I haven't been there for a long time, but we’ve had some good games, and some not so good games. It's just a part of hockey, right? When we play the way we can, the way the coaches want us to play, we're doing really well even against good teams. So I would just say that.

Against Avtomobilist, we played two really good games. We played sixty minutes of hard hockey, played our style, and obviously it was helpful. We won those two games, and I would say those were great for us.

GK: Speaking of Avtomobilist, I noticed that you instagrammed a photo of yourself with Pavel Datsyuk on the ice.

SD: It was obviously pretty special. When I was a kid, I would always watch him. Most of the stuff I do on the ice, it was learning from him. So playing against him was pretty great. In the second game we played, in the third period, he hit me hard. I couldn't breathe for a couple of minutes. But it was still a cool moment…for him to hit me. After the game when I saw him walking out of the dressing room, I told him, “It was an honor to get killed by you.” So that was pretty cool. 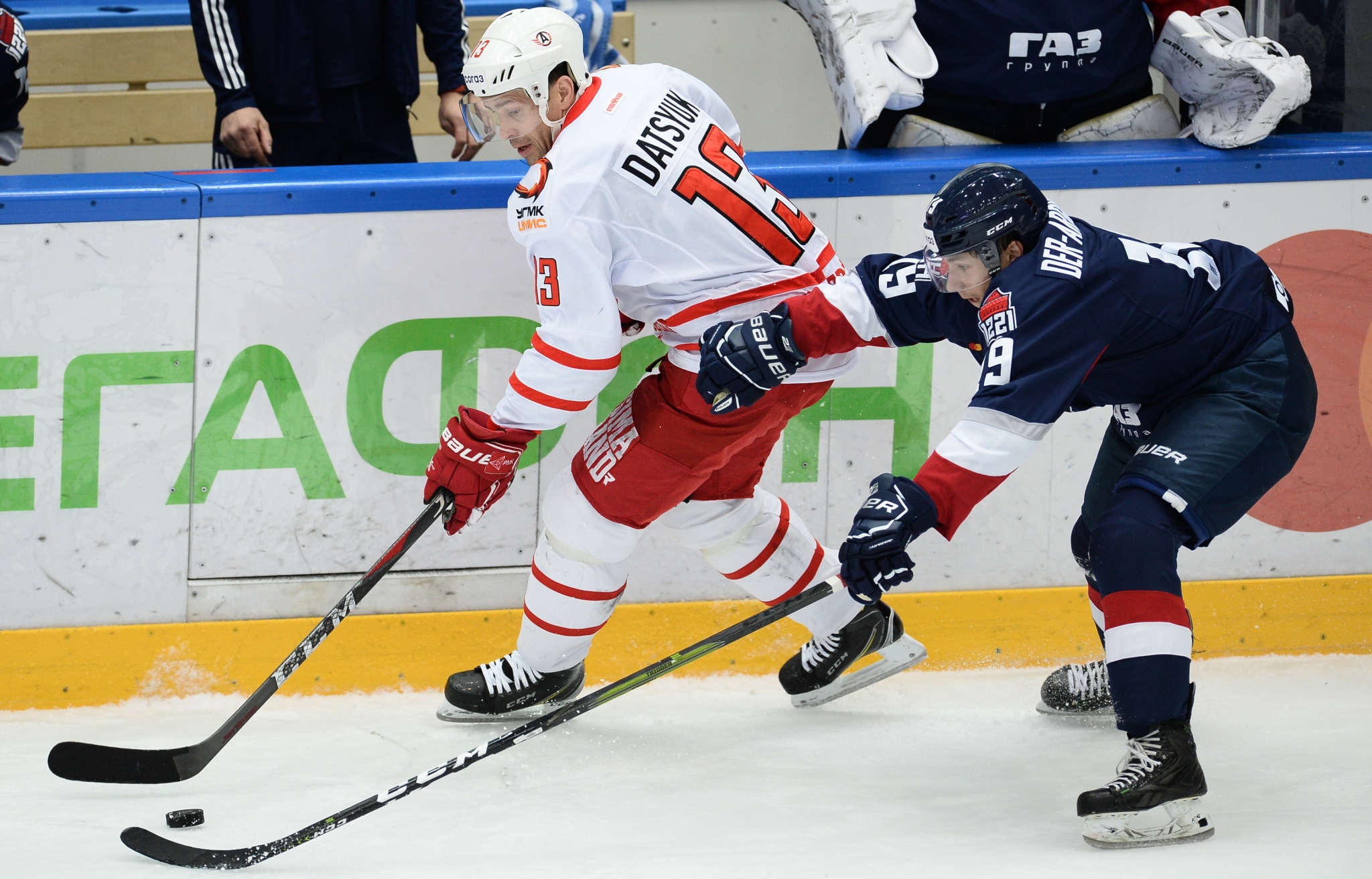 GK: You were drafted alongside former Red Army defenseman Alexander Romanov. Are the two of you close?

SD: Yeah, we played with each other when we were kids for a long time. Obviously it was cool for us to get drafted to the NHL together. He’s having a great career so far, and he's obviously a good player. During the summer, we were practicing together. We usually catch up on a lot of things, because we obviously haven't seen each other in a long time. Even when I would go back to Russia during the summer, I didn't see him—but we would just text each other sometimes. Just how's everything going, not much about hockey.

GK: Did you miss anything in particular about Russia when you were abroad? The food?

SD: After every season in North America, I would go back to Russia for the summer. So the time would fly by pretty quickly, and obviously I'm always enjoying a chance to be here. Nizhny Novgorod is not far from Moscow, so I come home sometimes if I get the chance. My parents come to watch my games here, so that’s pretty nice. I don't really miss Russian food, because I never was the biggest fan of it. It’s not something that I really missed in North America.

GK: Do you have any rituals or superstitions before games?

SD: Yeah, lots of them. When it's game day, I wake up and do every single thing the same. Even getting out of bed at a certain time, and things like that. So it's a lot of stuff, I couldn't even tell you. When I get changed, lots of things.

GK: Do rituals work because there is some kind of magic inherent in them, or does the comfort of a routine make you play better?

SD: I want to believe it's magic. 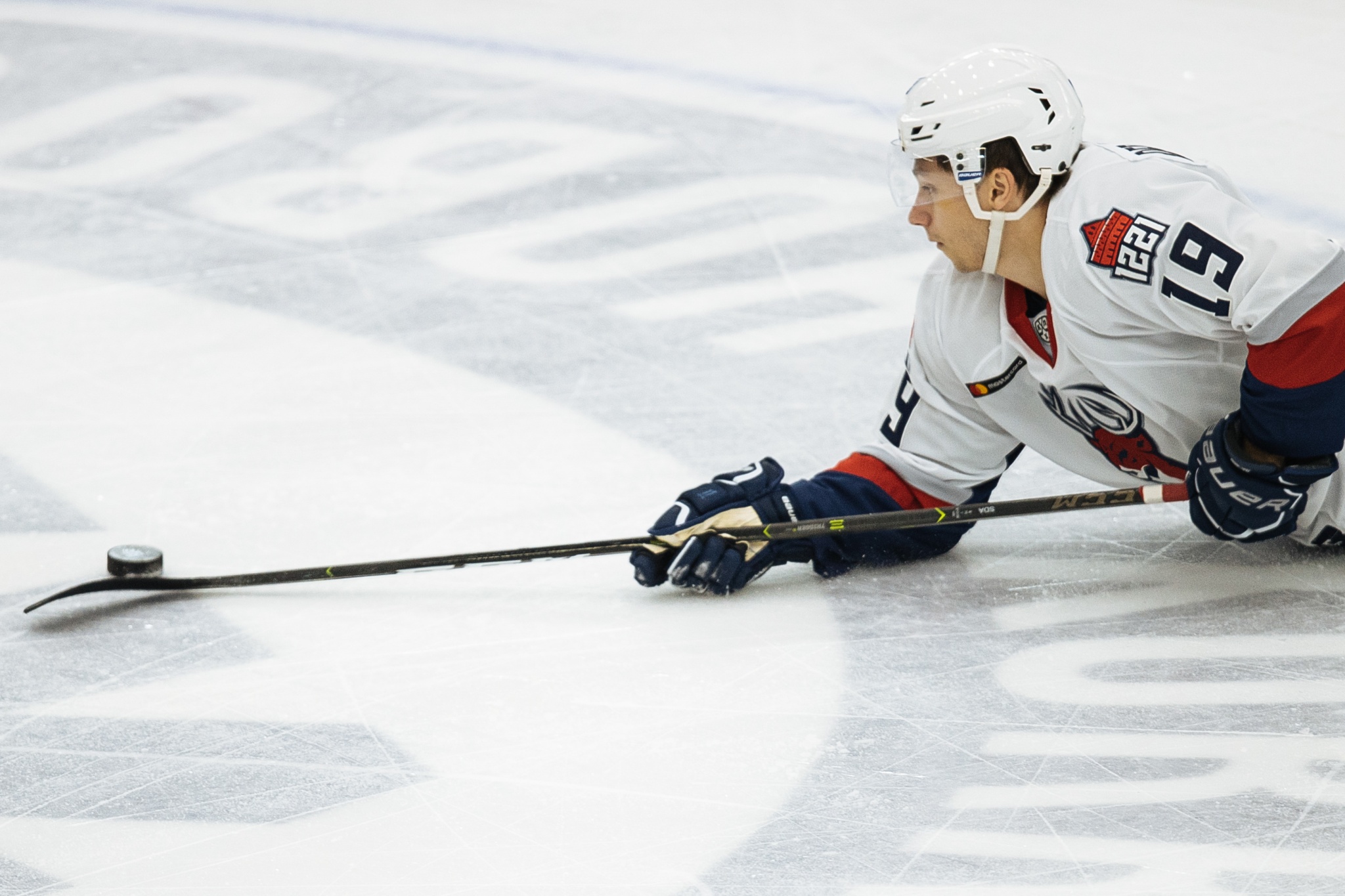 GK: We’ll go with that. Tell me a little about your family, because I know that you’re not the only hockey player under the same roof.

SD: Yeah, I have a brother. He used to play in the KHL too, but he’s not playing professionally anymore. I always tried to learn from him. I watched a lot of his games when I was young, and he would tell me what to do and show me things on the ice. It was helpful.

(Voice from the same room): His brother is a legend.

GK: Who was that? Your dad?

GK: Put him on the phone, please.

Alex Fedoseyev (AF): Hello, my name is Alex. Nice to meet you.

GK: Hi, Alex. Tell me something funny about your little brother.

AF: There are no funny stories about this guy, because he's not funny. And no jokes about him, nothing. He's not an interesting guy.

GK: The implication here is that you are much more interesting, obviously.

AF: Oh yes, that's true. You can write it like that. People in North America and Canada are unlucky because they didn't see me. Tell all of the presidents, all of the coaches in the NHL, they have to watch my game.

GK: Okay. I will be sure to let them know. Semyon, clearly you have a very supportive brother. Is that why you chose hockey in the first place?

SD: Obviously my brother played before me, but I don't know, I just stepped on the ice when I was three years old and kind of liked it. I enjoyed it every time I was on the ice.

GK: Your youth club, Wings of the Soviets, has immense history. It must have been interesting to grow up in that system.

SD: Yeah. It is a historical club, and I still love it. Every time I come to Moscow, I go to that rink, and obviously I had lots of good coaches there. I wish they would play pro hockey again [in the KHL], but it is what it is. That kind of sucks, and I hope it will change.

GK: We’ve already established that you idolized Datsyuk as a kid. Did you have a favorite team growing up?

SD: No, no. I didn't have a favorite team until I came to the OHL. I was living close to Toronto, so obviously I would watch the Toronto Maple Leafs games. Most of the guys around me were huge fans, and I had my friend Nikita Zaitsev playing for them. That's how I started liking them, and I was always dreaming of getting drafted by Toronto.

SD: Well, I like soccer. I like watching it, and I like to play it in the summer with my friends. Sometimes I go hunting with my dad. I haven’t done it for a while because most of the hunting is in winter, and I spend it in North America. My dad and I hunt in Kaluga and Ryazan, a couple of hours’ drive from Moscow. We went hunting in Africa too. That was probably the coolest thing