Pelino back to Magnitka, big trade for CSKA — the KHL week in review

The week’s big news involved new arrivals. At Metallurg, Mike Pelino returned to the coaching staff — and the team saw an immediate upswing in results. Meanwhile, Nikita Soshnikov left Ufa for CSKA, possibly the first of several high-profile switches to come before the end of the year.

Mike comes back to Magnitogorsk

As assistant coach at Metallurg, Mike Pelino twice helped the team win the Gagarin Cup. So when the 61-year-old Ontario native got an invitation to return to Ilya Vorobyov’s coaching staff, he was quick to agree. After leaving Lokomotiv at the end of last season — and overcoming a bout of coronavirus in the summer — Pelino had planned to remain in Canada. But the lure of the Urals was too strong. With Metallurg struggling for form, the club reached out to an old friend and colleague, and the result was swift. On the day his return was announced, Magnitka took Eastern Conference leader Ak Bars to a shoot-out. Two days later, the roster produced a fine team performance, rallying from 1-4 down to win 6-4 against Neftekhimik. And yesterday Metallurg came from behind once again to win at Torpedo. An addition to the coaching staff seems to be having the desired effect. 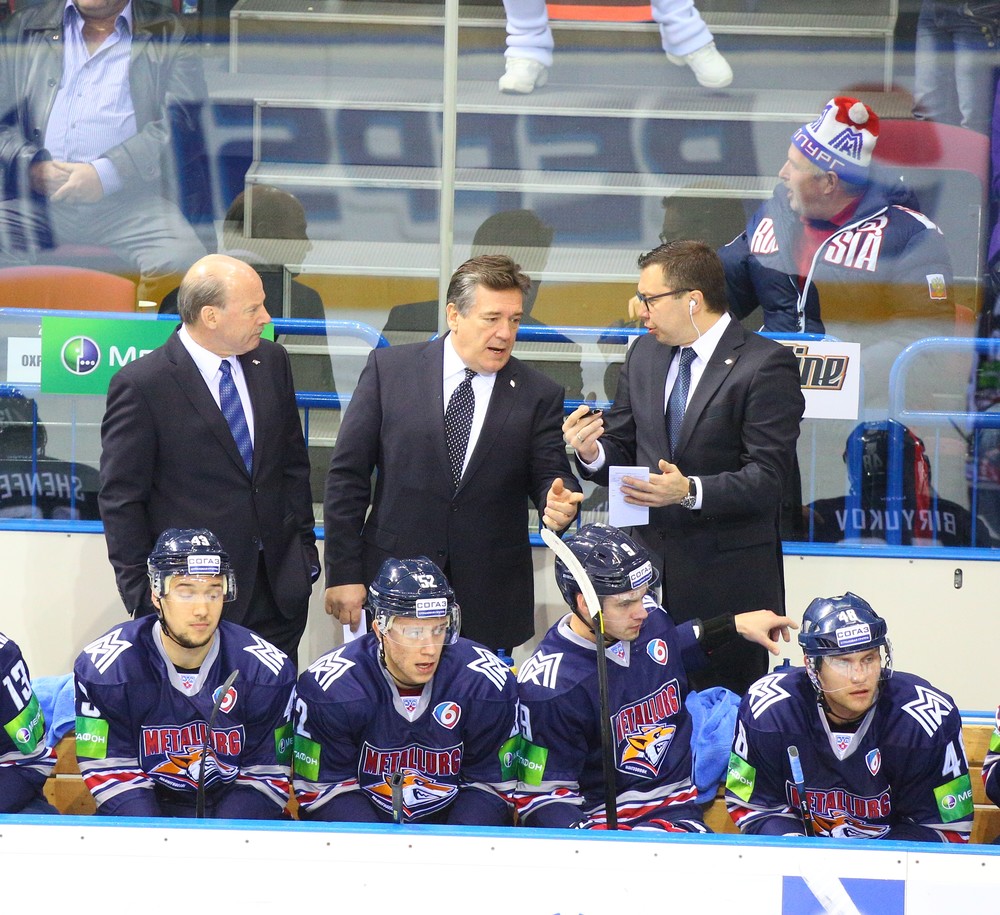 The biggest trade of the season saw Salavat Yulaev forward Nikita Soshnikov move to CSKA, with defenseman Mikhail Naumenkov going the other way. Soshnikov, 27, was second in team scoring last season; his 48 (27+21) points behind only Linus Omark as he played on the top line with the Swede and Teemu Hartikainen. This season, though, the former Maple Leafs winger has dropped down the pecking order in Ufa. With new head coach Tommi Lamsa favoring an all-import first line, Soshnikov’s game time has dropped — although he remains productive, with 17 (4+13) points in 21 appearances. Unhappy with his new role, the forward sought a move and agreed a one-year deal with the current league leader.

Dinamo goes to the dogs

Dinamo Minsk has been actively promoting its community program this season and, with Monday marking World Pet Day, the club staged a special photo shoot to promote the work of Belarusian charities seeking to find homes for abandoned animals. Dinamo’s Canadian forward Brandon Kozun was a keen supporter of the project. “I’ve always loved animals,” he said. “But often we see them out on the streets. We can do something to help them. This photoshoot turned out to be quite moving and I hope that we can help to find new owners and make everyone happy.” Continuing the animal theme, Dinamo’s players brought their own pets to practice in the build-up to last week’s home game against Vityaz, which was dedicated to the cause.

Kunlun Red Star got into the spirit of this year’s ‘Movember’ charity campaign, devoting its final two home games of the month to the cause. The Dragons adopted special jerseys for the occasion — and later put them up for auction to raise funds to support men’s health projects — and took the opportunity raise awareness of the global initiative. The choice of games was no accident: both opponents, Sibir and Avangard, were connected to Samvel Mnatsyan, a defenseman from Omsk who later signed for Sibir. He lost his battle with cancer last year — a condition diagnosed after he suffered an injury playing for Admiral — aged just 29. 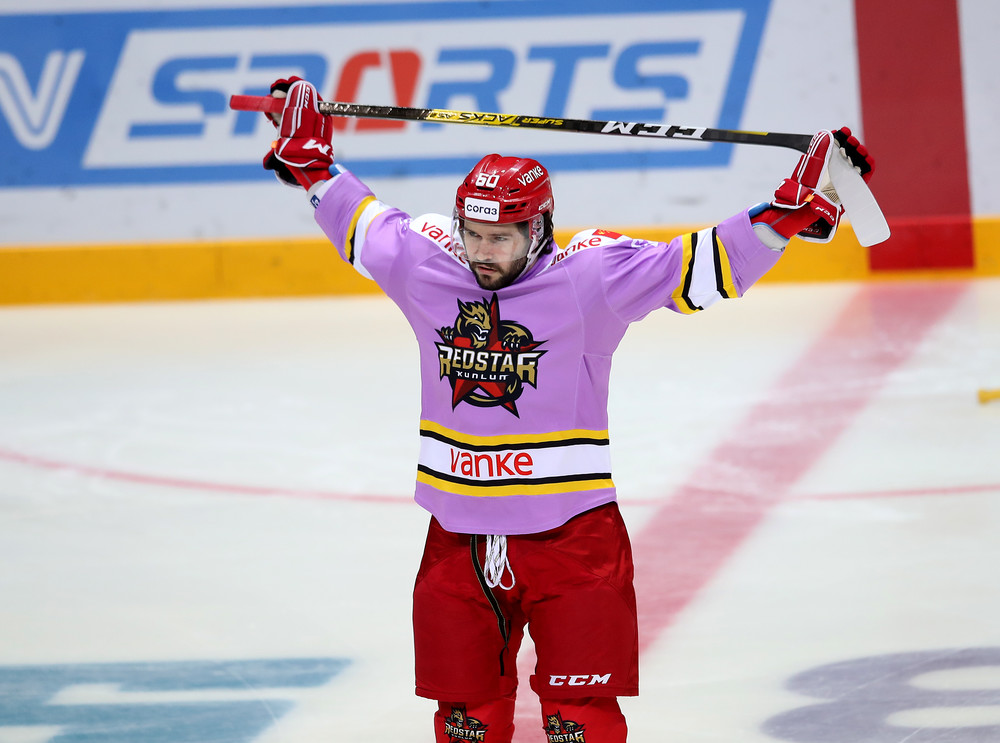 KRS Vanke Rays’ American international forward Alex Carpenter was voted the MVP for the Women’s Hockey League’s 2019-2020 season. Carpenter dominated scoring in the regular season, plundering 53 (21+32) points in 27 games before adding 7 (3+4) in five playoff outings as the Rays won the cup at the first time of asking. The 26-year-old, whose honors also include five World Championship golds and an Olympic silver, was awarded the prize after topping a poll of WHL coaches.

For Lokomotiv goalie Eddie Pasquale, life in Russia doesn’t mean giving up on his passions from back home. The 30-year-old Toronto native is a music lover — and that’s what inspires his helmet designs each season. Even on his hockey travels, he stills keeps on top of the country music scene, telling KHL.ru: “All of my helmets have a country singer on each side. I decide who has the best album out, then slap some country guys on it. This season, I have Luke Combs and Tim Hicks.” 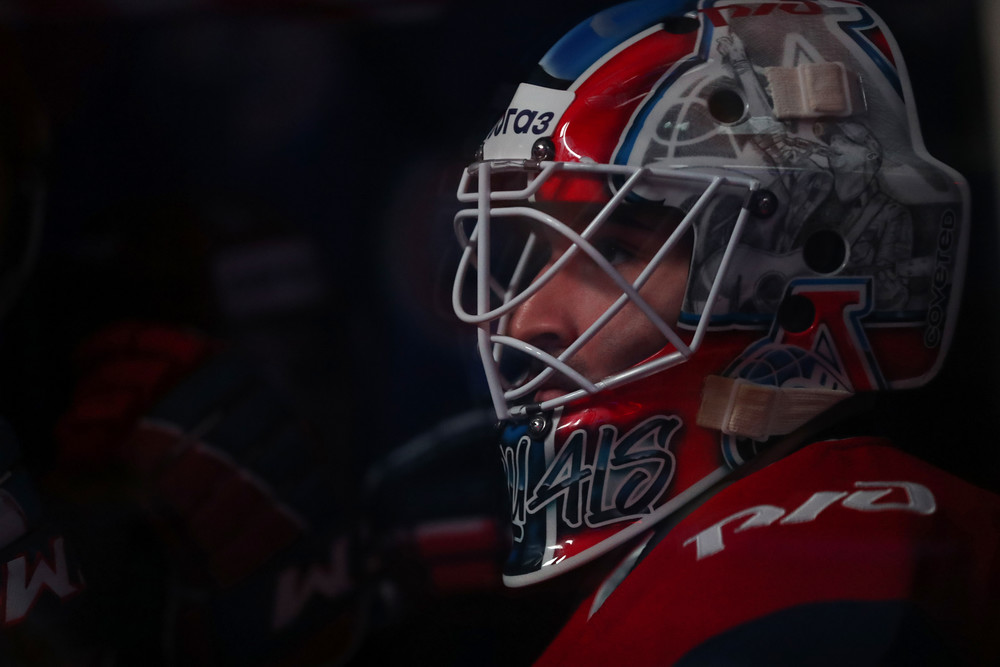