A late goal from Rodion Amirov set up Russia for a shoot-out win against Sweden at the Karjala Cup before the Czech Republic defeated Finland to set up a showdown between two unbeaten teams in Sunday’s game in Helsinki.

Russia’s young eagles secured a second victory at the Karjala Cup — and the stage is set for a showdown with the Czechs to decide the destiny of the trophy. A last-gasp tying goal from Rodion Amirov saw Russia escape defeat in regulation, then Igor Larionov’s braves held their nerve to win the shoot-out. Goalie Yaroslav Asakarov was in superb form to frustrate the Swedes in the extras and Vasily Podkolzin produced a masterful penalty shot to win it.

Russia began this tournament at high speed, blitzing Finland with three first-period goals in Thursday’s opener. But this game was very different. The first period was even, with chances for both teams but no scoring. Podkolzin and Arseny Gritsyuk came closest for Russia, while Leon Bristedt saw his redirect flash narrowly over the Russian crossbar in Sweden’s best chance. 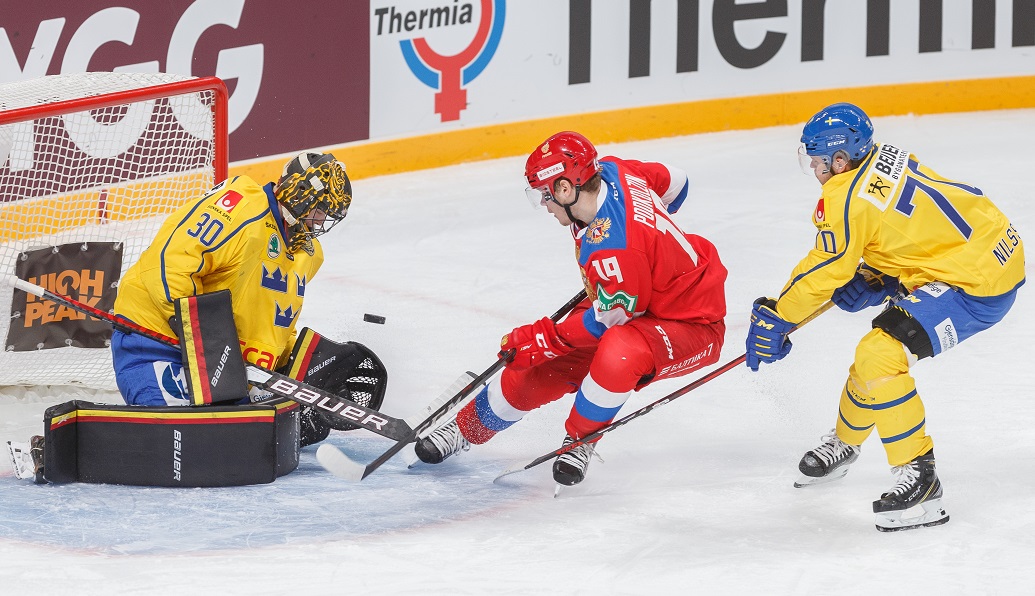 The second period continued in similar fashion and it was not until the closing minutes that we finally saw a goal. Russia found itself under pressure as the game reached the final stages, killing a penalty thanks to a big Askarov save to block an Anton Wedin effort from close range. But the momentum kept the Tre Kronor on the offensive even after the penalty ended, and at equal strength Wedin achieved what he failed to manage on the power play. Andreas Wingerli collected the puck in front of the net and picked out Wedin at the back door for the opening goal.

Russia responded just in time. With Askarov a spectator on the bench, his SKA team-mate Podkolzin pulled off a great pass to find Amirov in space in the center. The Ufa forward took his chance to grab his second goal of the tournament and take the game to overtime.

In the extras, the Swedes had more possession and might have grabbed the win if Jesper Sellgren’s effort had been an inch or two lower. Askarov then produced another important save to deny Max Friberg from close range and set up the shoot-out. And the SKA youngster continued to excel in his one-on-one duels with Sweden’s forwards. He stopped four out of five attempts, with his best save denying Jesper Froden. At the other end, Amirov and Podkolzin found the net — the latter with no small measure of flair — to give Russia a second win.

I’m really happy that our guys dealt with everything that was thrown at them and responded impressively to tie the game. That shoot-out is a huge experience for this team, something that builds character and generates a real team spirit.

The statistics suggest that we beat a far more experienced opponent?

We tried to play our hockey. Regardless of the score, we wanted to keep that attacking style and maintain our composure. And our goal proved how that works for us — in the biggest moment of the game, we made the right decisions. We keep talking about how the guys need to make sure they don’t succumb to the pressure in these moments. Everybody wants to be the hero but the decisive plays are made with cool heads and soft hands. We knew we were up against an experienced, skilled opponent, so this game was a great test for our players.

It was a good, competitive game. The Swedes are a well-drilled team. After two periods without a goal they got ahead but, thank God, we managed to fight back and win it in the shoot-out. As for my goal, Vasya Podkolzin just gave me a brilliant pass and all I had to do was put it in the net. It wasn’t something we worked on before, we haven’t practised together very much.

How much harder was it today compared with the game against Finland?

The Swedes play a tough game, focus more on defense, so it was harder to get our game going. Unfortunately, our power play isn’t really firing right now and that’s something we have to work on.

In the first period they kept us penned in our zone for a long time, but we kept trying to get out and attack. You can’t compare the two games; both are important wins. Today means a lot because we didn’t give up and managed to salvage the game. In overtime we were a bit nervous about the Swedes. We know how well they can skate and we were concerned that they could hit us with a quick counter, so we had to play as carefully as possible.

Metallurg’s Andrej Nestrasil got the opening goal as the Czechs made it two from two in Helsinki. After opening with a 3-1 win over Sweden on Thursday, Filip Pesan’s team made it a Nordic double with a shut-out win against the host. Former Barys goalie Dominik Hrachovina, now playing in Finland with Tappara, frustrated the home offense.

Nestrasil’s goal came midway through the first period, with Hynek Zohorna getting an assist. Early in the second, Jan Ordos doubled the Czech lead.

The Czech win puts the team top of the Karjala Cup standings with six points from two regulation victories. Next comes Russia, one point behind, after its overtime win against Sweden. The two meet on Sunday to decide the winner of the first phase of the Euro Hockey Tour. Host nation Finland needs a win over its Baltic neighbor to avoid last place.