Dinamo Minsk travel to Sochi in a heated battle on Sunday!

Man of the Week — Darren Dietz

KHL.ru’s weekly’ Man of the Week’ series goes on with Darren Dietz, one of the league’s best defenseman — the D-man was in outstanding shape last week, helping Barys winning three games in OT.

Last week, Barys was busy with a challenging road trip, with games in Ufa, Moscow, and Kazan. Barys gave an excellent show, winning all three games in OT. The starring of Barys’ success were forward Roman Starchenko and defenseman Darren Dietz. In the game against Salavat Yulaev, Starchenko tallied the 3-2 game-winner with a laser shot from the blue line, but in the same play, Dietz found his first assist of the season. Two days later, against Spartak, the Canada native blueliner stole the puck in his defensive zone, then catapulted forward and beat Julius Hudacek top shelf with just one minute played in OT. The Kazakh franchise’s captain was instrumental in Kazan as well when he started a fast counterattack that concluded with Starchenko’s tally — the game’s lone goal. Currently, Dietz leads all the league’s D-men with eight goals in eleven games. Since 2017-2018, when he came to the league, no other defenseman scored more than him as he keeps Kevin Dallman’s inheritance alive in the Kazakh capital. After being forced to re-schedule a bunch of games due to the problematic pandemic situation, Barys returned to active play in full-swing and is now already in the playoff zone. The Kazakh franchise shares with Torpedo Nizhny Novgorod the seventh place in the standings but has played five games less.

A native of Medicine Hat, Alberta, Dietz had an excellent junior career in the Western Hockey League, with the Saskatoon Blades. In the 2012-2013 season, Dietz topped all the WHL defensemen with 24 goals and was included in the league’s All-Star team. His strong numbers in the WHL guaranteed him a spot in the NHL selections, and the Montreal Canadiens picked him in the fifth round of the 2011 entry draft. With the Habs, Dietz will play 13 games in the NHL in 2015, spending the rest of his North American career in the AHL. After the 2016-2017 season, the D-man decided to sign overseas.

On July 1, 2017, Barys announced to have signed Darren Dietz to a one-year deal. The Kazakh franchise has earned a reputation of a team who knows how to move on the North American market: Nigel Dawes is the import with the most points in the league’s history, having played most of his seasons with Barys. In the KHL’s early seasons, one of the league’s best D-men was Kevin Dallman, who also spent most of his hey-days with the Kazakh franchise. The hope was that Dietz will be Dallman’s heir on the Barys’ blueline, and it can be said that the move paid off.

After a first year when Dietz had to adapt to a new country and a new league, scoring seven goals and 19 points, the D-man’s production skyrocketed when he had 53 (15+38) points in 2018-2019. In the next season, Dietz was elected the team’s captain, and since his first year in the league, no other D-man scored more than him, not even Salavat Yulaev’s Philip Larsen, who is also always on the top of the scoring charts on the blueline. 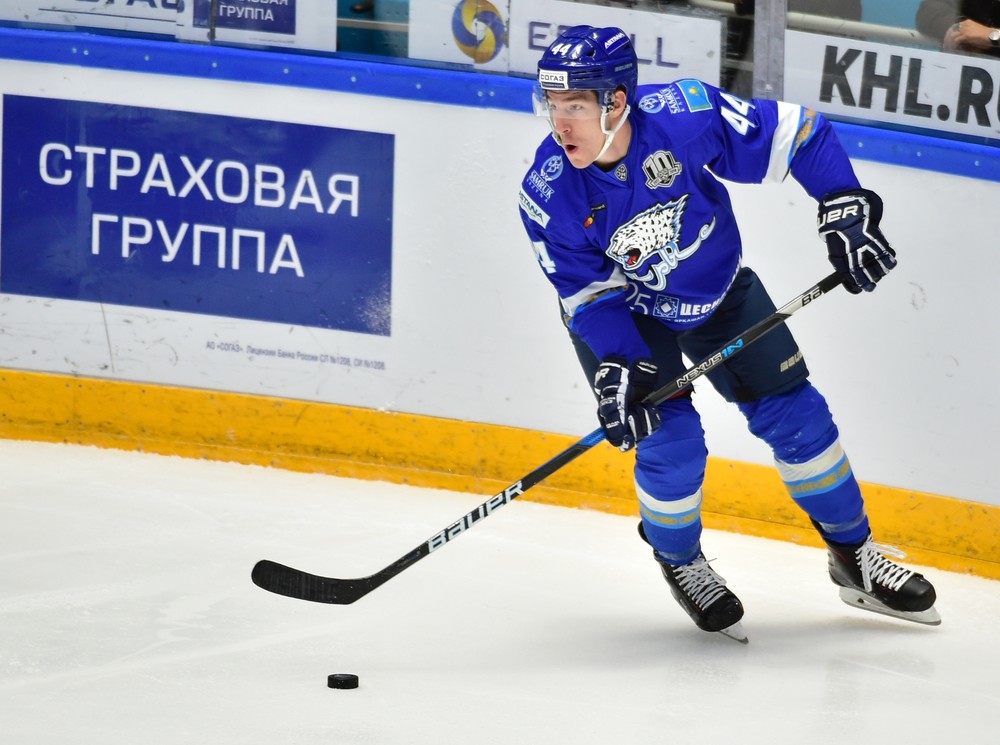 On the international scene

Just as most of other Barys’ first class imports, Darren Dietz was offered Kazakhstani citizenship and a chance to represent the country on the international scene. Dietz played for Kazakhstan at the 2019 IIHF Division IA World Championship — held in Nur-Sultan — with the home team winning all games and being promoted to the 2020 IIHF WC, that in the end were canceled due to the SARS-Covid19 outbreak. In the tournament, Dietz scored 5 (1+4) points in as many games. In 2020, Dietz and Kazakhstan took part to the pre-qualification round for the 2022 Olympics, but they failed qualification despite the D-Man’s five points in just three games.

With Dietz’s strong play of late, he will have other chances to help Kazakhstan climbing up the international rankings and maybe catch up Kevin Dallman in the D-man scoring ranks in the KHL. It will be a long challenge, though. Dallman retired with 431 career points, while Dietz has amassed 121 so far. Being only 27, the Medicine Hat native has still plenty of time in front of himself to improve his already impressive numbers.