At first glance, this seems like the roster of an All Star Game circa the mid-nineties. A resurrection of the “North America versus World” format. Maybe the set-up to a lame hockey joke. But no, this roll call is not the pipe dream of a nostalgic nineties hockey fan—heartsick over the days when the Backstreet Boys sported Kentucky Thoroughblades jerseys and Sergei Fedorov dated Anna Kournikova.

It is the official lineup of Kunlun Red Star Beijing—both on the ice, and behind the bench.

The KHL’s Chinese expansion team has a knack for attracting colossal hockey names in a variety of generations and formats. When you consider that “Iron Mike” Keenan was the first import coach to stand behind the team’s bench, perhaps it seems apt that an icon of his 1994 Stanley Cup Champion New York Rangers—Alexei Kovalev, recipient of the notorious “seven minute shift”—would follow suit, first as an assistant coach under Jussi Tapola and Curt Fraser, and now as head coach for the 2020-21 season.

Kovalev presides over a team filled with the children of his contemporaries, but one name in particular transports the Dragons’ leader back to his earliest professional days as a Dynamo Moscow recruit. Twenty-four-year-old forward Ivan Nikolishin joined KRS this summer. His father Andrei, an NHL alum and advisor to the Kunlun organization, holds a nightmarish spot in the head coach’s earliest hockey memories.

He once forgot teenage Kovalev at a train station.

After scouts identified a talented young winger in the city of Togliatti—playing on a broken wrist, and yet unable to hide his mesmerizing skill—Dynamo Moscow invited Alexei Kovalev to their training camp the following July.

“They told us to take the train and [Andrei] Nikolishin would meet us at the station,” Kovalev recalled of his unceremonious arrival. “Me and my Dad took the train to Moscow, but when we came out of the station, we didn't see anybody.”

Father and son slept at the station for two days before attempting the Moscow metro on their own. Eventually Kovalev found his way to Dynamo with no help from Nikolishin, who had gotten mixed up on the train schedules and shown up at the wrong time. It would appear with the emergence of Ivan on Kunlun Red Star’s roster that all is forgiven, but it is worth noting that the elder Nikolishin has not been made responsible for anyone’s transport this season.

Rounding out the coaching bench are two-time Stanley Cup and Gagarin Cup champion Slava Kozlov and NHL journeyman Igor Ulanov, both of whom overlapped as players at Khimik Voskresensk of the Soviet League in the early nineties, and later as assistant coaches of Spartak Moscow. Kunlun’s coaching troika have a combined total of over 3,000 NHL starts, three Stanley Cups, an Olympic Gold and a treasure trove of National Team medals. 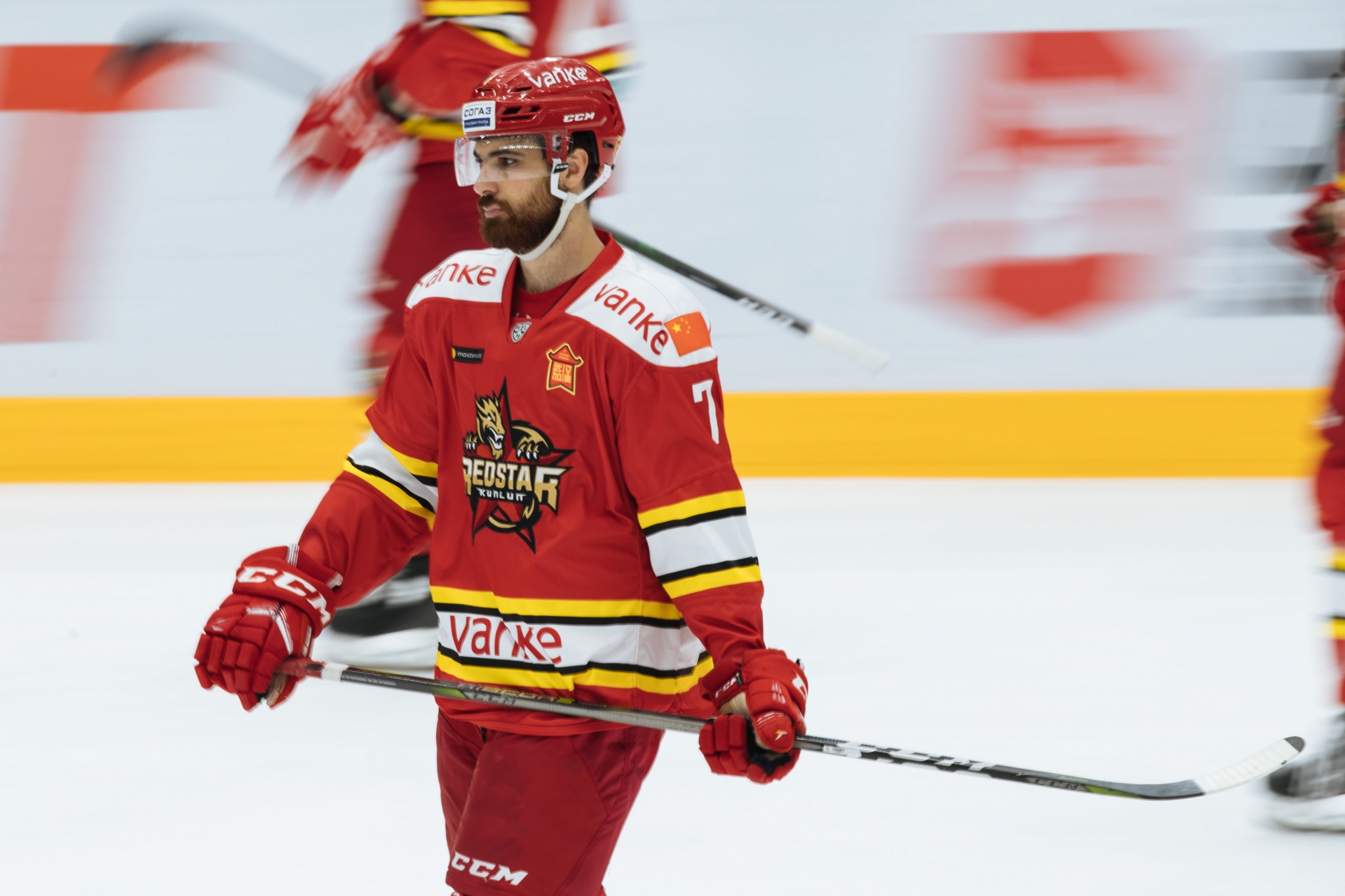 Jake Chelios and Dávid Bondra are among the returners to Kunlun’s squad this season, having survived a tumultuous KHL debut that involved the club’s exile from Beijing after the coronavirus outbreak. Chelios wears the number seven for KRS, as once seen on his father’s back upon joining the Chicago Blackhawks. When asked if he had set out to honor family legacy with the choice, the Beijing blue-liner laughed. Not exactly.

“He was very excited when I told him though,” Chelios recounted over the summer. “He had been trying to get me to wear that number for years. I did wear it growing up. How it happened was pretty funny. They texted our group chat asking what number everybody wanted to wear. As they texted, I was about to answer ’27’ because I had always worn it. [Former Dragon] Adam Cracknell called me right before I texted back and we talked for ten to fifteen minutes. The second I hung up, Cracknell—without even telling him the number I wanted—texted that he wanted number 27. So he stole it.”

Twenty-seven, of course, is the number that head coach Alexei Kovalev chose throughout his playing days, leading to the infamous nickname of “AK-27.” Are you still with me?

While on the subject of paying homage, forward Dávid Bondra is wearing the number 12, sported by his father Peter for the better part of two decades. As if this pantheon of hockey scions could reveal itself in any further complexity, the elder Bondra and assistant coach Slava Kozlov served as co-assistant captains of the former Atlanta Thrashers in the 2005-2006 season.

“It’s a lot of fun to be playing with these guys, and I knew Ivan Nikolishin from our youth,” said Dávid Bondra, expected to rejoin the Kunlun lineup later this week. “Our dads played together in Washington for a few seasons, and I went to the same school with both him and his brother, Alexander. Jake Chelios and I go back to our college days, where we spent three years together at Michigan State. He was the first guy I called when I agreed to terms with Kunlun.”

Bondra spent his childhood in North America watching Nikolishin, Kovalev, Ulanov, and Kozlov play with and against his father. “Their knowledge of the game is unparalleled,” he added. 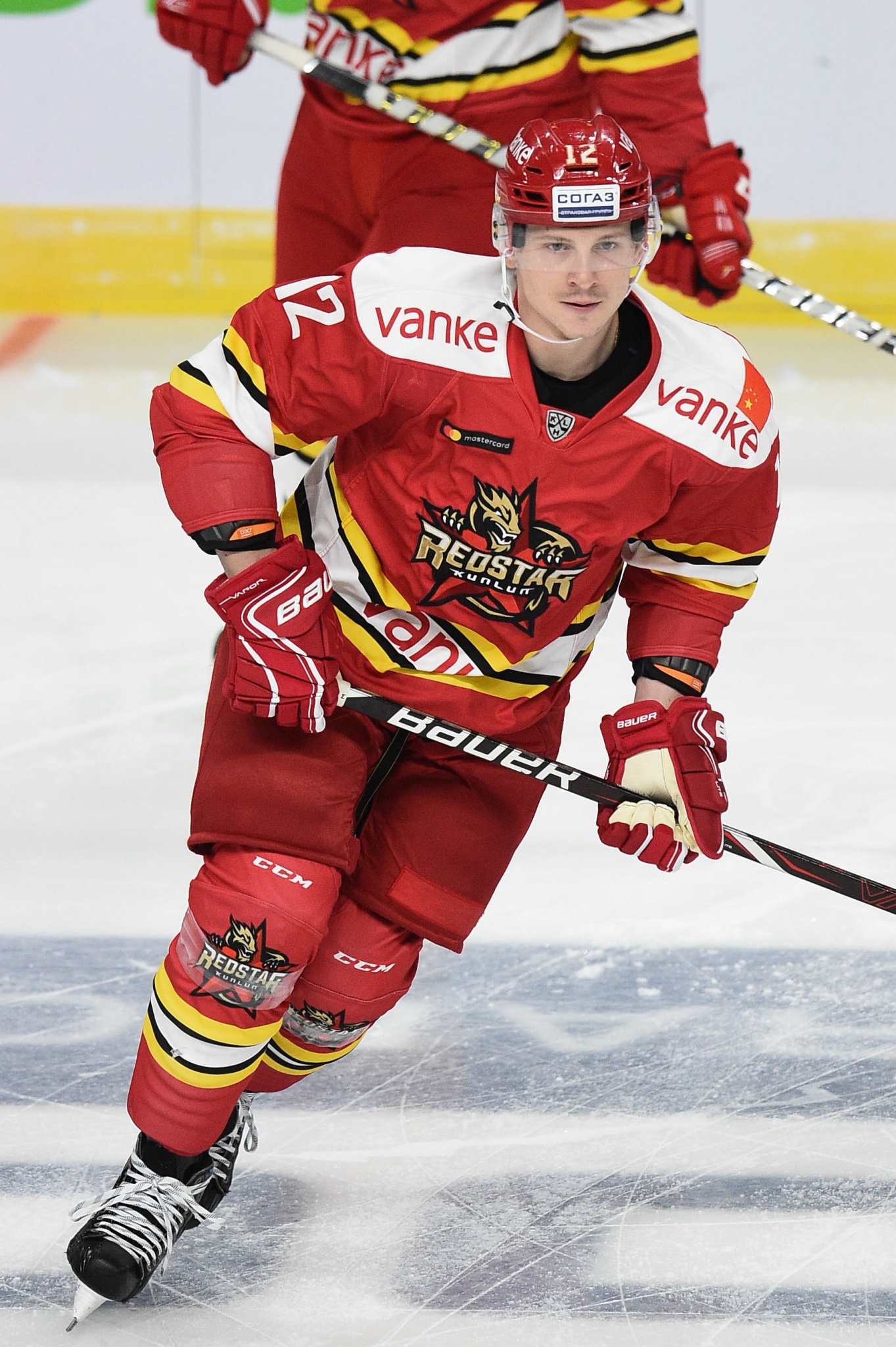 When the news hit that Igor Larionov Jr. had been signed to a tryout contract from SKA’s VHL affiliate Neva, it rounded out an interesting trend: three names on the Kunlun Red Star docket have been inscribed on the Stanley Cup under the banner of the Detroit Red Wings—Kozlov, Chelios and Larionov.

Jake Chelios knew Igor and his sisters—Alyonka and Diana—from his father’s decade in Detroit. “I don’t remember meeting Slava [Kozlov] back then,” Chelios said. “But I did have a chance to play with his nephew Vladdy Namestnikov for a couple of tournaments growing up.”

Slava Kozlov and the elder Larionov were among the hallowed “Russian Five” who restored glory to Detroit in the mid-1990s under head coach Scotty Bowman. Larionov Jr. and his father are logging simultaneous career milestones in Russia; the younger is making his KHL debut versus Spartak Moscow, while the elder rose to his first National Team head coaching position for Russia’s U20 squad this year. 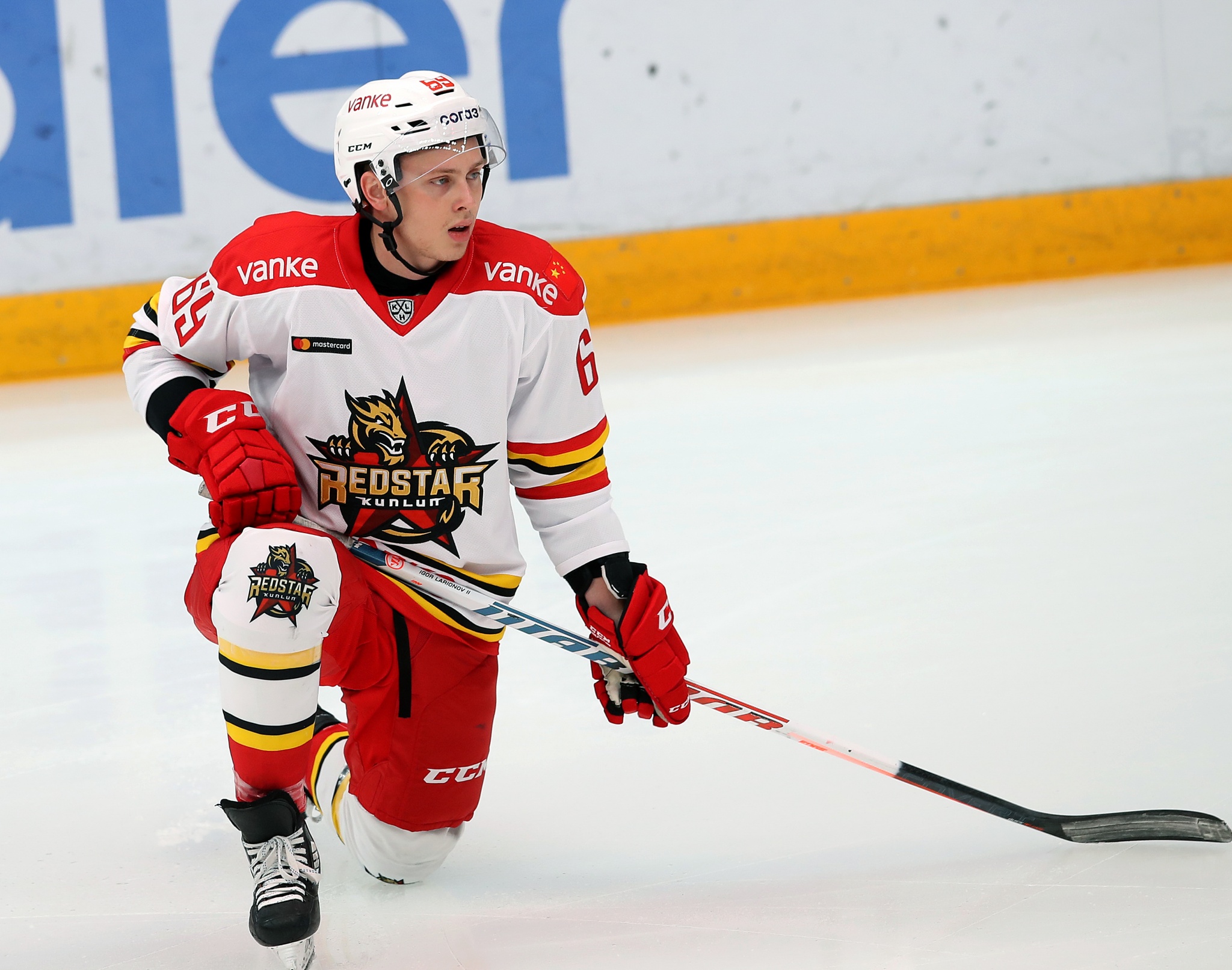 The Kunlun Red Star blue line has featured yet another hallowed name to local fans: thirty-six-year-old Sergey Gimayev, whose late father played in the Soviet league for a decade and is one of the most beloved figures in Russian hockey history. Gimayev headed CSKA's hockey academy until the late 2000s, after which he worked as a color commentator and iconic television journalist until his death on the ice at a veterans’ hockey match in 2017.

This penchant for hockey name-brands does not limit itself to the men within Kunlun’s organization. KRS Shenzhen Vanke Rays captain Alex Carpenter, reigning champion of Russia’s women’s league, is the daughter of Stanley Cup-winning player and coach Bobby Carpenter, who briefly served as the head coach of the men’s side. An Olympic silver medalist and perennial All Star, Alex Carpenter was fundamental in the delivery of China’s first-ever professional hockey title. She is now contending for a repeat.

Kunlun’s intricate ecosystem of hockey royalty began as early as the club’s inception. When KRS signed on to the KHL charter in 2016, their first head coach was Vladimir Yurzinov Jr., son of a legendary Soviet and TPS (Liiga) coach by the same name. In the 2016-17 season, the Kunlun roster included Igor Velichkin, son of the former Metallurg Magnitogorsk general director, Gennady Velichkin.

Vadim Pereskokov also featured in red and gold that year, whose father Igor began his career as a serviceman for CSKA. The elder Pereskokov started at Red Army when Viktor Tikhonov’s side had been relegated to Russia’s tier two, but remained with the club for a lifetime despite the performance roller coaster. His commitment “for better or for worse” ultimately paid off—Pereskokov served as the equipment manager through CSKA’s long-awaited 2019 Gagarin Cup Championship win.

With so many names that warrant the sound of trumpet flourishes in the global hockey community, it might be assumed that Kunlun’s war chest would be overflowing. Thus far this season, that has not been the case. The Dragons await their first on-ice victory, with just three points deriving from one shootout loss, and a forfeit victory when Yaroslavl was unable to ice a squad due to COVID-19. The roster has cycled through over forty names since the start of the season, as import players struggled to secure visas and COVID wreaked havoc both on their Russian contingent and newly-arrived foreigners, not to mention coaching staff and support personnel. As players return to the line-up and the team’s final imports make their way to Russia, fortunes are largely expected to reverse.

Of course, should further measures be warranted, Alexei Kovalev’s son Nikita has recently arrived in Mytishchi to debut for Atlant’s junior (JHL) squad. He could become the sixth hockey scion to lace up for the Dragons this season, rounding the share of legacy players on the main team to over twenty percent. While the Kunlun Red Star motto has remained “United We Win” since the club’s inception, perhaps a new idea could soon be floated: