The KHL shares a record sum between its clubs

On Sep. 17 in Moscow, the KHL Board of Directors held its latest meeting. During the course of the discussions, it was confirmed that money earned by the league for last season’s TV rights would be distributed among our member clubs. In total, more than 466.5 million rubles (US$6.2 million) will be shared among the competing teams. Despite the curtailment of the 2019/2020 season, the League continues to follow its strategic development plan and increase the annual payment to the clubs.

The KHL began distributing TV revenues between its member clubs in the 2014/2015 season. Last season, the League successfully sold TV and betting rights in 34 different countries, including Russia. In total, 1,050 games were broadcast on 17 international channels, 888 were shown on regional TV stations and 58 were broadcast by Russia’s federal channel Match TV. The KHL’s in-house TV service, KHL TV, broadcast 1,387 games.

Due to the curtailment of the championship, there are some changes in how the TV money is shared among the teams based on the results of the previous season.

The distribution of the remaining funds, which is based on participation in the championship (30%) and the number of broadcast games (40%)

▪       40% is distributed based on the number of broadcast games. Those clubs that earned more through selling the rights to their games receive a greater share of the revenue.

Previously, the remaining 30% of the revenue was shared according to the results of the season. Playoff participants shared 15% of the money, 7.5% went to the Gagarin Cup winner, 3% to the runner-up and 4.5% to the leader in the regular season championship.

Because of the curtailment of last season’s playoffs, the league issued a final table in which the eight teams that qualified for the second round were ranked equally in a notional placing ‘1-8’

As a result, the 43 million rubles that would have been split between the Gagarin Cup finalists is now to be shared equally between the eight teams that qualified for the second round.

Thus, the distribution of funds based on last season’s results looks like this: 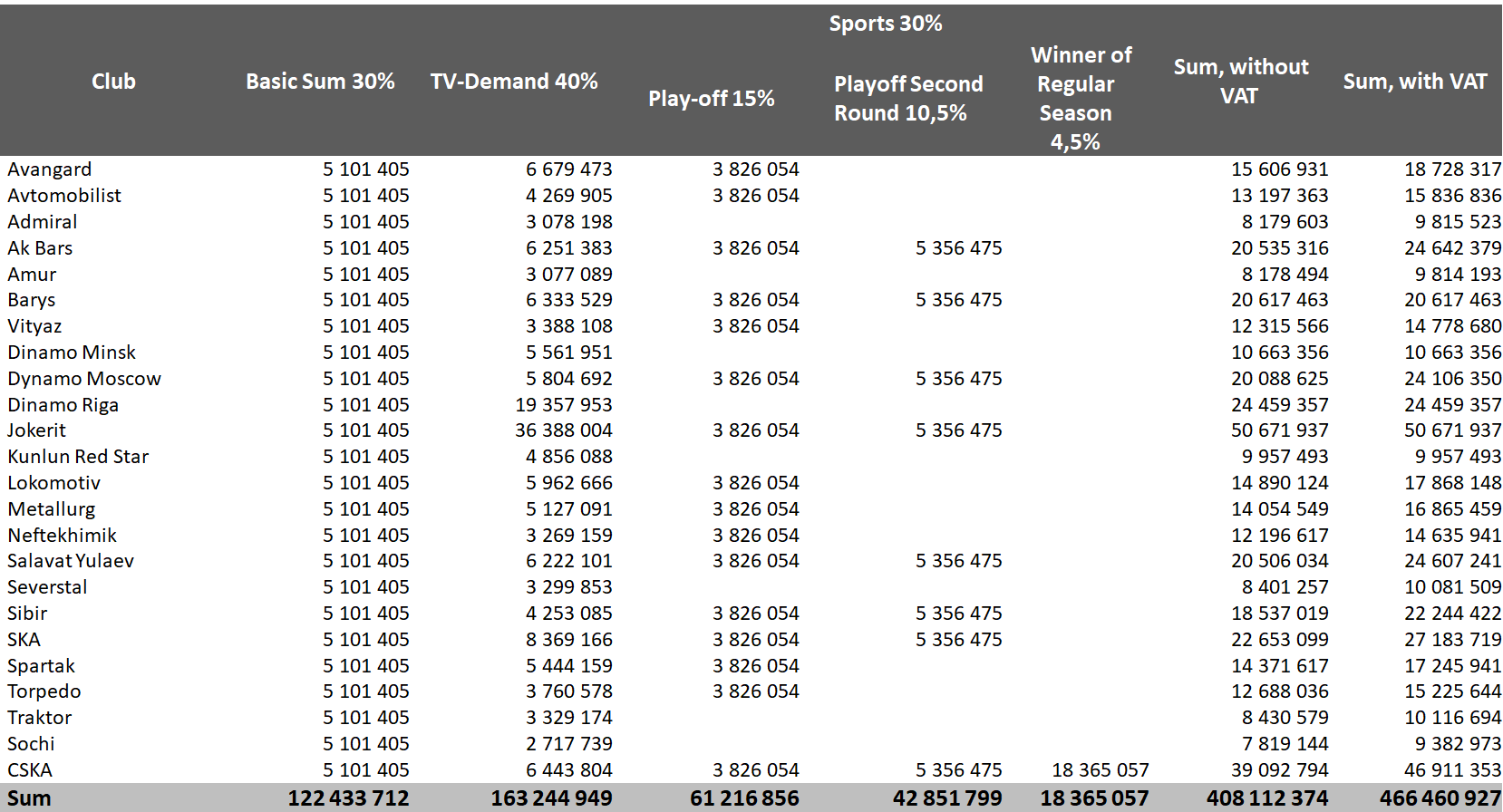 Clubs are advised to use this money to pay for the following:

▪       Improving and modernizing TV coverage of home games, where that is funded by the club;

▪       Organizing high quality video conferences for the media (including the purchase of professional equipment);

▪       Enhancing the spectator experience at games.