Olympic bronze medalist and Sibir newcomer Eric O’Dell had the best faceoff percentage of the 2018 Winter Games. Given the name of my interview series, I felt compelled to take him on—and naturally, the Canadian forward did not disappoint.

A 2008 draft pick for the Anaheim Ducks, O’Dell has a similar career trajectory to many of the KHL’s North American imports. After a number of seasons between the AHL and the NHL, the Ottawa native opted to move his career to Europe—inking a deal with HC Sochi in 2016. Hall-of-Famer and Stanley Cup winner Sergei Zubov arrived to coach the Black Sea squad one year later, ushering in O’Dell’s most productive seasons in the league. After a short stint with powerhouse Magnitogorsk, O’Dell touched down in Novosibirsk this summer—a sprawling metropolis in southern Siberia, known for its passionate fanbase.

We spoke after Sibir’s hard-fought opening road series. O’Dell touched on his Olympic experience, life under Zubie, and of course, his prowess on the faceoff.

Gillian Kemmerer (GK): Sibir suffered three losses on the opening road trip, all via narrow margins. What areas will the team need to tighten up moving forward?

Eric O’Dell (EO): Yeah, like you said, we actually played pretty good hockey. I think we've been coming out slow in the first couple of games. Our first periods are driving the score. We've kind of dominated the last few teams we've played in the second and third periods. Trailing by a few goals, it's tough to get back once they had the lead. But I think we're playing okay. We've got a few things to adjust and will need to focus on our systems, but besides that, I think we're playing pretty well.

GK: I see that you’ve moved around within the lineup. Do you have some sense of where you will stay?

EO: We have a few guys that are still sick, and I think [Zavarukhin] is shuffling the lines early in the year and seeing who fits well with whom. Right now, I think I've done pretty well with everyone that I've played with, so I don't think I've really caught chemistry with just an individual. Whomever he's played me with, we've been playing well [together]. I think every line on our team has been playing well.

GK: Nikolay Zavarukhin made his head coaching debut last year with Sibir. How does he communicate with imports, and how would you summarize his strategy?

EO: We've got a younger team, and I think he's a great coach for our team. He's not negative at all and keeps our guys happy, keeps them motivated, and definitely gets them working hard. For his English, I think he's actually better than people think. He's like most Russians—they’re pretty good at English, they just don't want to speak it! He tries to avoid it at all times, but I think his English is actually pretty good. 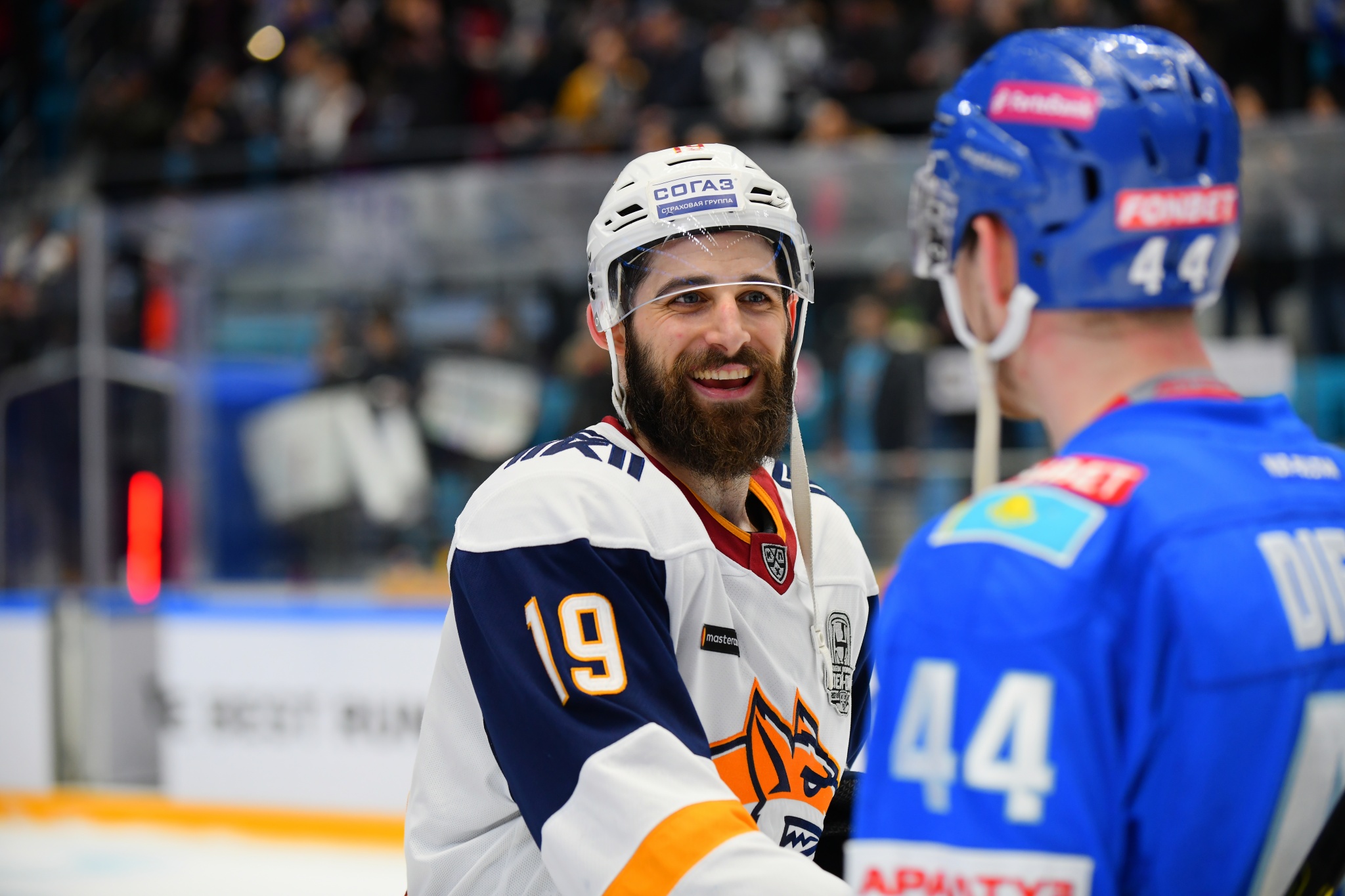 GK: You played for Hall-of-Famer Sergei Zubov during your seasons in Sochi. What was it like to have such a legendary Russian player behind the bench?

EO: Zubie was awesome. He acted like a player on our team during practice. I'm pretty sure he could have suited up for us a few times and played—he was that good. He liked playing after practice with us, shooting on the goalies. And I'm telling you, he had a better shot than a few of us! He was a very positive guy and he was in North America for so long, so I think he brought some of that over. It was nice for us to know his systems, and the way he ran the team was very cool. He put a lot of pressure on his imports, and I think we played pretty well for him. I’ve really liked every team that I played for here, so I can't really complain.

GK: Why do you think that you struggled to match your Sochi numbers in Magnitogorsk last year?

EO: We had such an offensive team last year, and we had guys playing different roles. We had the same player on every line. It was a pretty stacked roster, and I think everyone had to change their roles to try and help the team out. I think I jumped on a different role on that team, and that's just the way it went. When I was in Sochi, I was the guy to get the goals for our team. In Magnitogorsk, we had so many guys that scored goals and put up numbers. Everyone had a different role on that team.

GK: Moving to Sochi is one thing…the Black Sea, mountains, Formula 1. Moving to Magnitogorsk or Novosibirsk is an entirely new experience. How have you acclimated on a personal level?

EO: I think Magnitogorsk was a bit of a shocker last year, but we had such a great group of guys—and as hockey players, you're at the rink most of the time anyway. It doesn't really matter what city you're in. The city was great and there's a few great restaurants there. It was small and the fans love hockey, so it was fun coming to the rink. Novosibirsk is a really big city. There are a lot of things to do, great restaurants and same thing—we have great fans. I am excited to get our first home game going.

GK: What was your biggest playing adjustment from the NHL/AHL to the KHL?

EO: Well, I think the biggest thing for me was the ice size when I first came over. The ice was a lot bigger than in North America. You can't really skate around the ice full-blast every period because you're going to get tired. The game is definitely different, but the ice sizes are switching to North American and Finnish. For North American players, I think it's good for us because we are used to it. As for the adjustment, I think it’s about being more patient on the big ice and attacking when you can. Be smart about it.

GK: I saw that you visited a memorial to the 2011 Lokomotiv team on the anniversary of the crash. You’ve played in the KHL for several seasons, so I am sure you understand the impact that tragedy had on hockey fans—and Russia in general.

EO: This time every year, it's kind of tough. I know that every time we put down a flower, or even just look at the pictures of the players, it's tough. You think to yourself that it could have been anyone. It could have been any team. The league is doing a great job every year of getting it out there and remembering them. You pray for them and just hope for the best.

GK: You had the best faceoff percentage of the 2018 Olympic Games. Interestingly, your head coach was interviewed for Sibir’s website before the season, and he acknowledged that imports are often better than Russians in this regard. What has contributed to your success?

EO: I did well in the [Olympic] tournament, and I think I'm pretty good on faceoffs. I don't know about his quote saying North Americans are better than Russians—honestly, I have no idea. Some guys just have a different style of taking faceoffs, and some are stronger. We would try and take faceoffs after every practice just to work on it, but I also use a really short stick. I think that might be a reason—I get lower to the ice and am a little bit stronger on the stick.

GK: Did we just uncover a secret here?

EO: [Laughs] Yeah, exactly. Don't put that in the post!

GK: No chance. Let’s go back to that Olympics—I love hearing about where players were when they got the life-changing call that they made Team Canada.

EO: We had a few tournaments in the lead-up, and I think every Canadian that went to the tournaments knew that the phone calls were coming out in the following weeks. I was on the team bus with Sochi and got a call from all of the coaching staff and GMs of Team Canada welcoming me to the team. It was pretty crazy. I was trying not to scream on the bus—it was dark, and I'm not sure if we had won or not! But it was really, really exciting. [Zubov] talked to me about his experience and what to expect—how much fun it was going to be. And it was a blast. I had so much fun there, and we had a great team. I am going to remember that forever.

GK: I know that Canada’s shocking loss to Germany stung. How did you recover mentally to win bronze?

EO: It was definitely a tough loss. I think we underestimated them and they came out hot off the start. They had an early lead on us, and then they just played the trap. They played a smart game. It was definitely an unfortunate loss for us, but we knew that bronze medal game was huge. The Czechs are always a great team as well. We knew that we had to come home with a medal, and I think everyone dug down and we had a great game. [Being on the podium] is kind of hard to describe, but everyone had their families there and the Canadian flag was all over the arena. It was amazing.

GK: I saw a picture of you going through the handshake line with SKA a couple of seasons ago. You played against the famous roster that boasted Kovalchuk and Datsyuk. Who have been some of the most interesting players that you've played against in the K?

EO: Definitely has to be those two, and I actually got Datsyuk's stick. I asked him for it, and he signed one and gave it to me. When I was growing up, those guys were amazing in the NHL, so getting to play against them here was great. They're older now, but they're still amazing players and it was cool to see them up-close on the ice.

GK: There’s a rumor that Kovalchuk might be coming back…

EO: Well, hopefully he signs on our team!

GK: Did you grow up playing other sports?

EO: I played soccer until I was sixteen, I think. I was going back and forth. Once I left to go to the OHL, then I stopped playing soccer. I was really good at both, so I used to like soccer a lot.

GK: Why hockey at the end of the day?

EO: I think hockey is just a Canadian sport, and I was a little bit better at hockey than soccer. If you're playing soccer in Canada, it's kind of tough to make it. I know it's not really our sport. Hockey is huge in Canada, and I just stuck to it.

GK: I saw that Sibir posted a video of you reading a fairytale in Russian. I was pretty impressed with the imports’ reading abilities. Do you speak?

EO: No, I don't. I know the alphabet and have been here for awhile. I can read a bit, but I don't know what anybody's saying! I know a few words and can get by at the grocery store, but it's a tough language. They had the words in the English alphabet, so it was easier for us to read.

GK: That’s not fair. I was like, “Damn, look how well these imports have mastered Cyrillic.”

EO: No one's supposed to know!

GK: We’ve revealed a few secrets today. I fear a smackdown is coming.

GK: Okay, last question. Give me one song on your workout playlist these days.

EO: I tend to listen to whatever's in the room, and it’s either old Rock music or Russian music. So I don't really have a playlist, but I like the new hip hop song “Rockstar” by DaBaby.