KHL.ru picks out some of the key narratives that will shape the upcoming season.

The idea has been discussed for long enough — now it’s here, and there’s no escape. Just ask, for example, Sergei Kalinin. The Olympic champion had two years to run on his contract with CSKA but found himself moving to Traktor as the Army Men struggled to fit their roster under the limit.

Kalinin told Sports24 about his shock when he realised what the salary cap would mean for his future. “I had a contract with CSKA for another two seasons,” he said. “Nobody could have guessed that things would turn out this way, but this is the new reality. We need to get used to it. Even when I signed a long contract with SKA, they told me there would be a hard salary cap in a couple of years, but I never thought it would affect me.”

However, that’s exactly what the new rules are meant to do. No longer can the KHL’s wealthiest clubs stockpile talent at will. Now more top players will be spread around more clubs, making for an increasingly competitive and exciting league for everyone. Alexei Kudashov, former head coach of SKA and team Russia, said: “The hard salary cap has done its job, the rosters are more even and I’m looking forward to season of even results. The abbreviated pre-season should only add to the unpredictability, especially in the early weeks of the campaign.” 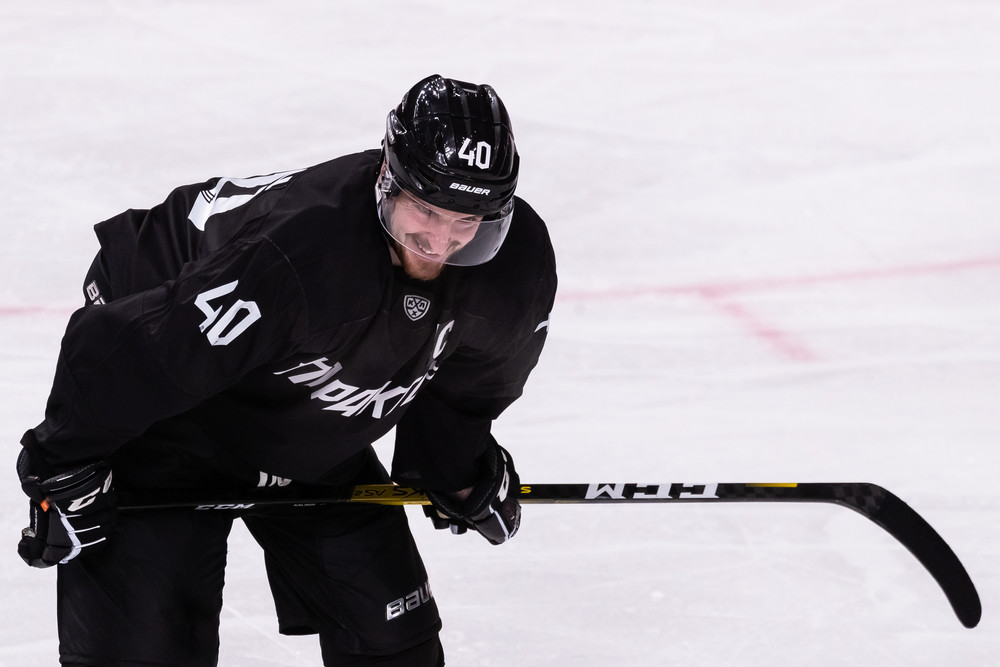 Both CSKA and SKA, the two Army clubs, are among the teams facing the biggest changes this summer. The clubs found themselves having to shed players to fit under the cap and also lost a tranche of talent to the NHL.

In Petersburg, SKA has a new head coach, with Valery Bragin replacing Alexei Kudashov for club and country. Bragin is best known for his long association with Russia’s U20s. That means he’s worked with many of SKA’s players as they advanced through the national program — newcomer Vladislav Kamenev, signed from the Predators, is a case in point after captaining Bragin’s team in 2016. He is also ideally placed to nurture the likes of Kirill Marchenko, Ivan Morozov, Vasily Podkolzin and Danila Marchenyuk as they continue to mature into KHL stars. But it also means he lacks experience of the day-to-day life of working with a club: Bragin’s previous stint in the KHL was a brief one with CSKA, and it ended unhappily. His immediate challenges include pepping up an offense that lost Alexander Barabanov to the NHL and Dmitry Kagarlitsky to Dynamo Moscow, among several changes.

In Moscow, meanwhile, Igor Nikitin continues. He, too, must contend with salary cap pressures and an exodus of talent to the NHL: Ilya Sorokin, Alexander Romanov, Mikhail Grigorenko and, most potent of all, Kirill Kaprizov, are heading over the Atlantic. Yegor Rykov makes the return journey a year after leaving Sochi for New York, but the big question is who will replace Kaprizov. Nikolai Goldobin, a prodigious talent whose career in Vancouver never quite caught fire, could be the one to watch here. 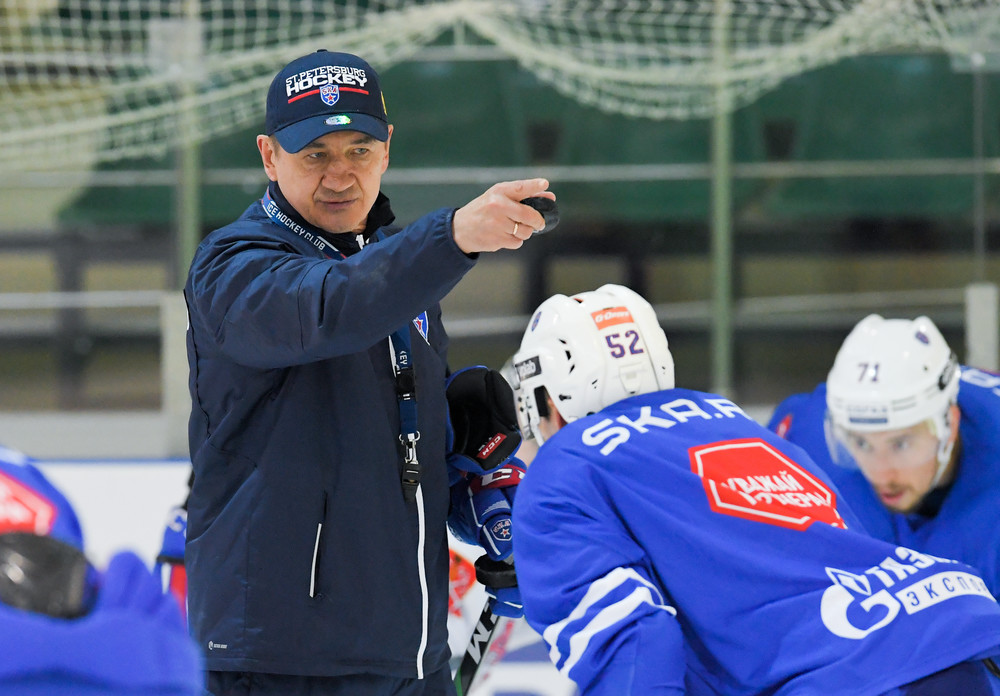 As the KHL’s all-time leading import, Nigel Dawes has achieved almost everything he could hope for in the league. But, so far, he’s yet to get his hands on the Gagarin Cup. Spending his career thus far at Barys and Avtomobilist, two teams good enough to reach the playoffs but lacking at the sharp end of the season, means that itch is still to be scratched. This season, though, it could change. Dawes, now 35, joins Ak Bars. Dmitry Kvartalnov’s team topped the Eastern Conference last season and looked good in the playoffs before COVID halted its progress. And adding a forward of Dawes’ caliber to an already impressive roster can’t harm the chances of Gagarin landing in Kazan once more.

Winning the cup is also a big motivation for Kvartalnov. The coach has ticked every other box in his career so far, including repeat Continental Cup success and a grand final loss with CSKA. Right now, he’s the best coach in Russia not to win the title — is this the year he joins the ranks of the KHL’s greatest? 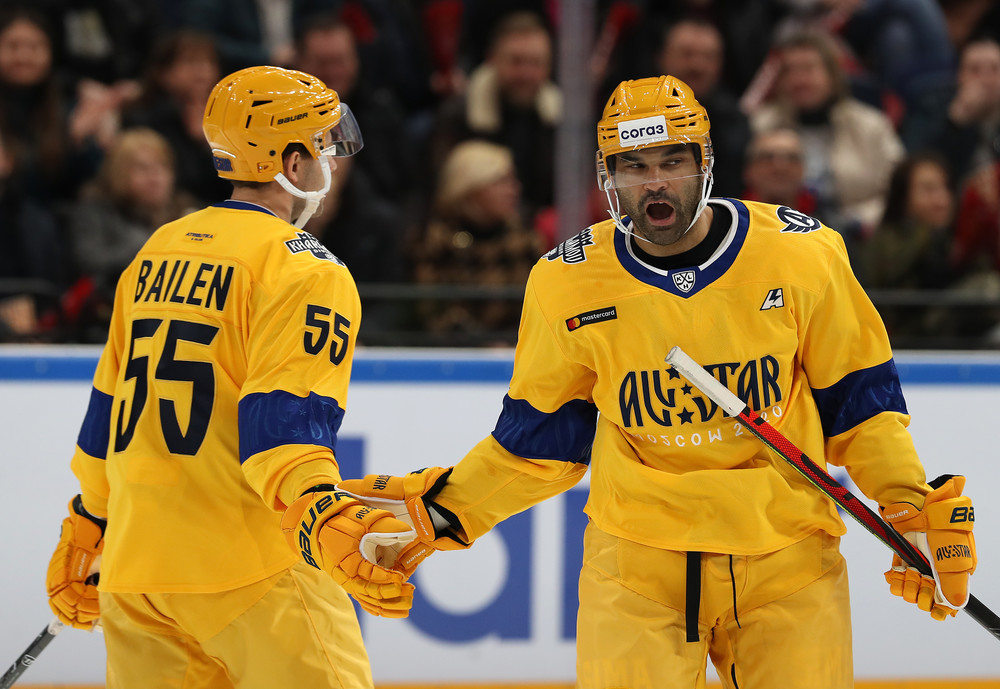 Last season was an uncharacteristically bleak affair for Metallurg. The two-time Gagarin Cup winner never looked likely to add to its collection and the early-season departure of head coach Josef Jandac merely prompted questions about why the Czech had continued after an underwhelming playoff exit in 2019. Ilya Vorobyov returned as head coach and this summer he oversaw an extensive rebuilding job.

The overhaul is extensive. Finnish goalie Juho Olkinuora arrives from Admiral, a sign that Vasily Koshechkin is no longer the undisputed #1 in Magnitogorsk. A clutch of long-serving D-men — Viktor Antipin, Alexei Bereglazov and Evgeny Biryukov — have moved on. Up front, where the team misfired last season, there’s no room for Brandon Kozun, Andrei Loktionov, Roman Lyubimov, Eric O’Dell or Dennis Rasmussen.

There’s plenty of experience joining the blue line though. Artyom Zemchyonok, Yegor Martynov and Mikhail Pashnin know their way around the top end of this league. And up front, Sergei Plotnikov and Nikolai Prokhorkin have trophies to their name. Andrei Chibisov and Igor Shvyryov make intriguing returns from North America and, of course, there’s still a certain Sergei Mozyakin at the club. Even at the age of 39, the club captain and record-breaking goalscorer can drive the team into contention for the big prizes. 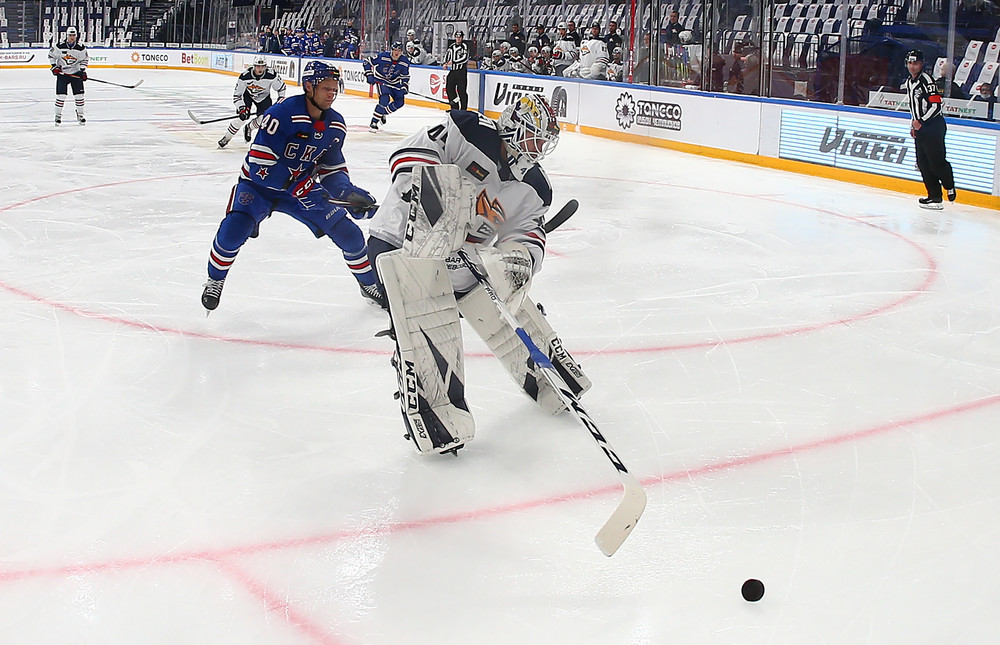 Of the new head coaches taking their places behind the bench this season there are several intriguing stories. In Yekaterinburg, Bill Peters is looking for redemption. His abrupt departure from the NHL put a cloud over his career, both personally and professionally. Now, in Russia, the Canadian has a chance to start over and do what he does best — build a winning team. His previous experience in Russia, as head coach of Team Canada at the 2016 World Championship, was entirely positive: the Canadians repeated as champions, beating Oleg Znarok’s Russia along the way. In Yekaterinburg, he takes over at an ambitious club with a team capable of challenging in the Eastern Conference. Can he find the formula to make the capital of the Urals into a true capital of hockey?

Peters is not the only new coach in the competition. Alexei Kovalev needs no introduction as a player, but this season will be his first as head coach at any level. He’s stepping up to take the reins at Kunlun Red Star, replacing Curt Fraser after the Chinese club ran into difficulties ensuring its foreign staff could return for the coming season. Kovalev knows Red Star well, having served as assistant in recent seasons, but he could hardly have been dealt a more challenging hand. Relocating to another country, signing an entire roster at the last minute and still waiting for confirmation of the arrival of the club’s imports, this legendary forward will need to be at his inspired best to keep his team competitive.

Kovalev might be the least experience head coach in the league, but he’s not the youngest. That’s Tomi Lamsa, the Finn newly appointed at Salavat Yulaev. Lamsa is just 40 but he already knows Ufa well enough after joining the club as assistant to his compatriot Erkka Westerlund three years ago. Westerlund left after a year, but Lamsa stayed ... and when Nikolai Tsulygin’s reign came to an end this summer, he was invited to step up to the top job. In recent seasons, Salavat Yulaev has been enigmatic, capable of great performances but struggling to put together consistent results. The departure of the much-loved Linus Omark adds to the pressure, but Markus Granlund looks like a capable replacement and two Finnish stars, forward Teemu Hartikainen and goalie Juha Metsola, give the team a chance of pushing for the big prizes. 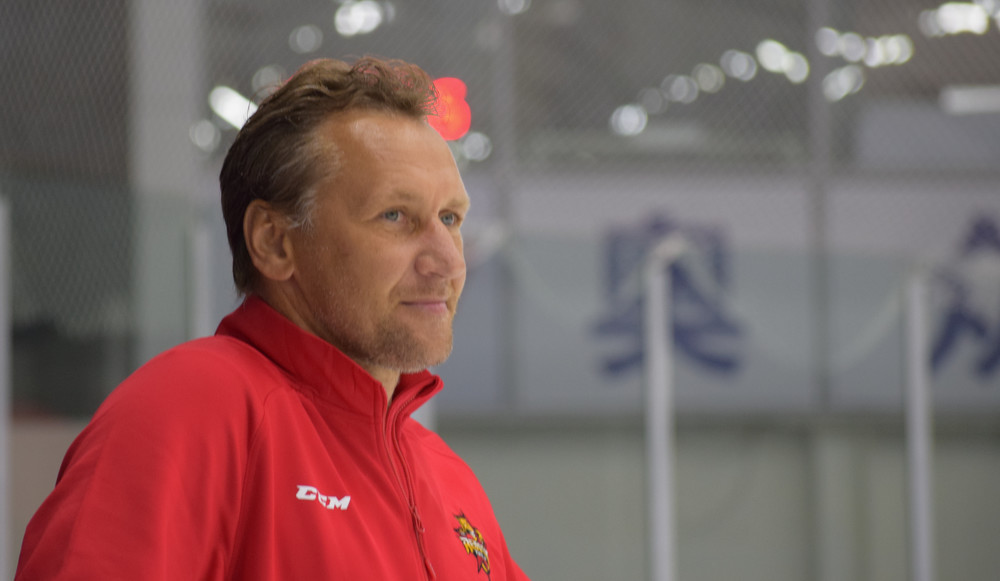 When the KHL starts later today, it will be the first major league to begin its 2020-2021 campaign. With many other competitions still unsure of when they will be back on the ice, our league is an attractive destination for emerging talent. As a result, several familiar faces are on their way back on loan deals — and there might be more to come.

Jokerit has taken advantage of the loan market to bring back two stars of recent seasons. Eeli Tolvanen set rookie records in 2017-2018, earning an Olympic call-up and a move to the Predators. Since then, though, the dangerous forward has struggled to make his mark in the NHL. Still only 21, there’s plenty of upside in his future, and a move back to Finland to gain some top-level game time makes sense for all concerned. The same is true of Mikko Lehtonen, the free-scoring defenseman who emerged as one of the stars of last season. He joined Toronto Maple Leafs in the summer, but has been loaned back to Jokerit to maintain his fitness before the NHL pre-season camps get going in December.

Elsewhere, several Russian prospects are back. Vitaly Kravtsov, who rivalled Tolvanen as the break-out star of 2018, has rejoined Traktor from the New York Rangers, while Yegor Korshkov is back at Lokomotiv with the blessing of the Leafs. Flyers prospect German Rubtsov moves to Sochi and Ak Bars acquired 20-year-old forward Alexander Khovanov, reckoned to be Minnesota’s second best prospect after Kirill Kaprizov on a one-year deal. Depending on how the NHL and AHL restart plays out, there could be more to follow in the coming weeks. 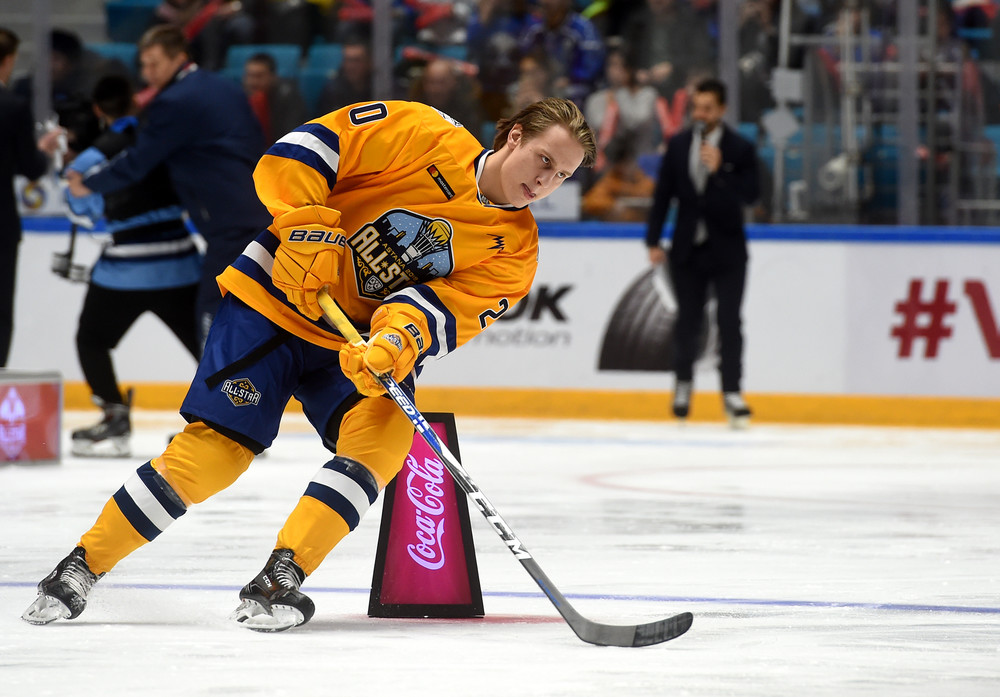