Usually, import players come from hockey giants like Canada, the US, or the Nordic Countries. The Czech Republic and Slovakia also provided and keep on providing the league with plenty of talent. However, four countries also contributed with some of the finest performers in the years of the league’s existence and even Gagarin Cup champions. Today, the talk is about Austria, Norway, Slovenia, and Switzerland.

Austrian man Bernd Bruckler was a great goalie and an inspired writer after his career in the KHL; he wrote a book titled ‘This is Russia’. It’s been translated into several languages. “I was playing in Finland, looking for some offers from Russia,” he told KHL.ru right before the KHL World Games in Vienna. “I knew that KHL was growing, and it was a high-quality league. So it was a great opportunity for me. I spoke with Andre Lakos, the first Austrian player in the league, but mostly with the guys on my Finnish team. At Espoo, I played with Mikko Koskinen, who had a great career in KHL and then moved to North America. For me, it was clear that he is a very talented goaltender but also had incredible mental strength. He was so good! He has the right attitude if he allows a goal; for him, it does not matter was it a good or bad-luck goal.”

Bruckler spent three seasons in Russia, two in Nizhny Novgorod, and one in Sibir. Despite his excellent play, he never made it to the postseason.

“I cherish my time in Russia,” he added. “It was three seasons, I started a fourth, but then they let me go. I’ll never forget this time.” 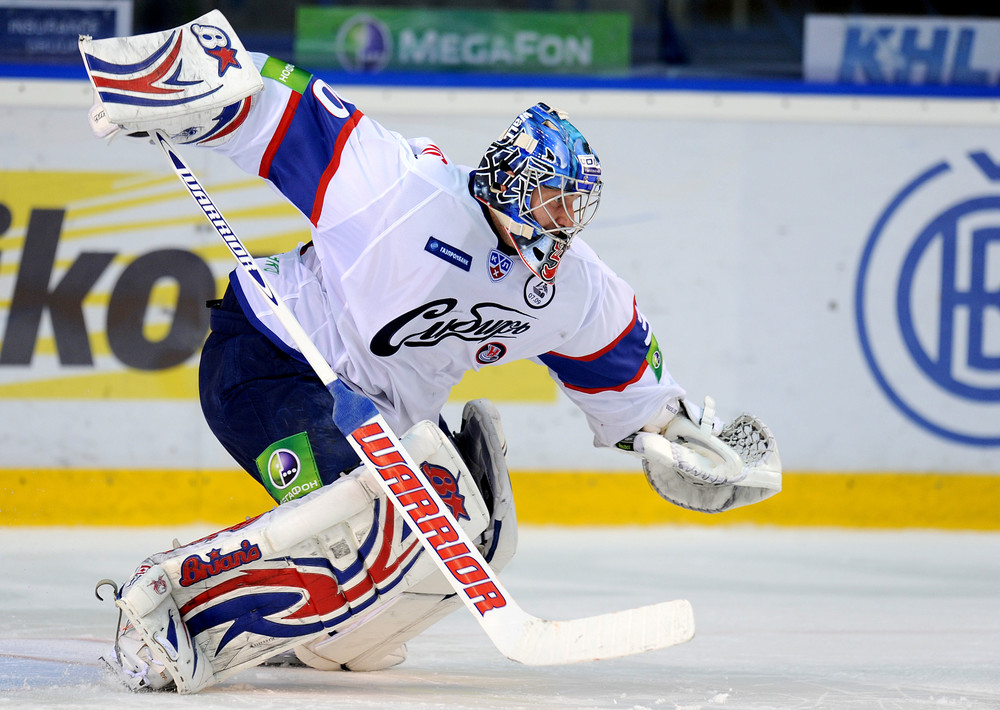 In the early years of the league, another goalie for an untraditional hockey market — Lars Haugen from Norway — made a name for himself growing through strong play for Dinamo Minsk’s farm team. Haugen played three high-level seasons with Dinamo’s senior team, with two appearances in the playoffs. Representing the Belarusian franchise, Haugen also lined up several times for Norway at the IIHF competitions, including the 2014 Winter Olympics. After playing in Belarus, Haugen played in Sweden and Austria, and this summer returned home in Norway.

Martin Gerber arrived at Atlant as Switzerland’s number one goaltender of his time. He had won the Stanley Cup with the Carolina Hurricanes in 2006 and was a regular on the Swiss national team, playing in two Olympics and eight World Championships. He arrived in Russia after three seasons with the Ottawa Senators and a brief spell at the Maple Leafs.

“It was all very different after North America,” he told en.khl.ru before the 2018 KHL World Games. “I was used to big traffic jams in Los Angeles, but Moscow is on a whole other level. You never know if it will take you 30 minutes or 3 hours to do your things. Our first child was born in Moscow, so my wife had a private driver. That helped us a lot.”

It’s always strange to see that there are so few Swiss players in the league’s history, considering Russia and Switzerland’s good ties in ice hockey. “It’s a huge adjustment from life in Switzerland compared to Russia. Everything is different and depending on where you play, it might be difficult to settle into your new city. And then there are restrictions on the number of foreign players on each team, making it even more difficult for Swiss players,” Gerber explained. The veteran goalie hanged ’em up in 2017. 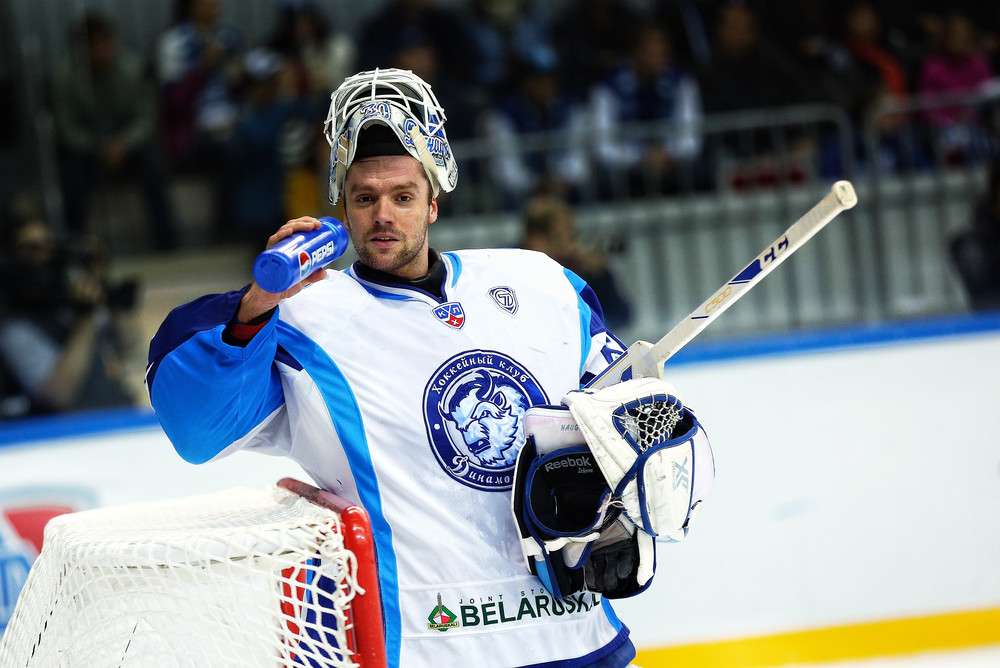 At this point, it’s odd to see that Jonas Holos played only two seasons in the KHL — the Norwegian blueliner provided some good hockey for the Railwaymen, and he could have tried his luck with another team. In any case, he patrolled the blue line for more than two years in Yaroslavl, posting 38 (16+22) goals, demonstrating a strong shot from the point, and excellent defensive awareness. However, after 134 games for Lokomotiv, he signed in Sweden, where he’s set to play for the 2020-2021 campaign. 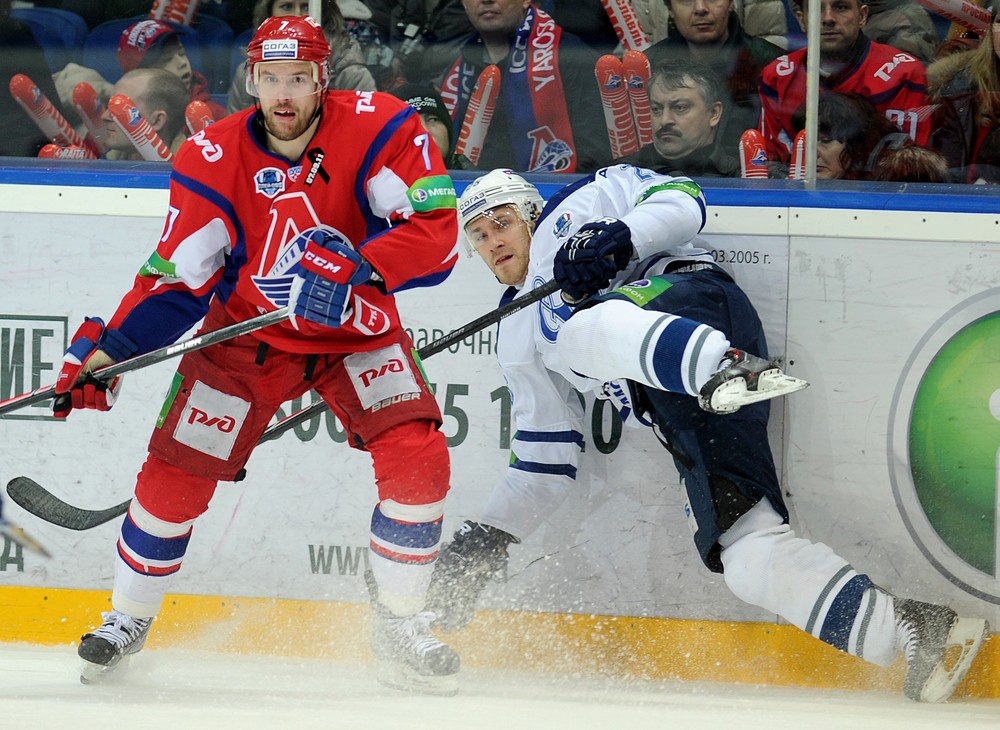 Towering defenseman Andre Lakos only played two seasons in Russia, but managed to leave a good impression. In the KHL’s yearly years, Traktor was yet to become the team that reached the Gagarin Cup finals in 2013, and Lakos only played three postseason games with Chelyabinsk. However, in the Southern Urals, Lakos impressed with his size and decent mobility, and his experience was precious in the locker room. After his time in Russia, Lakos lined up in several leagues. Last year, he played in the Czech Republic, and he is intended to keep on playing at his 41.

For Croatia native Goran Bezina, signing with Medvescak was a sort of return home. After 12 seasons in Geneve — 10 as the team’s captain — Bezina decided to move to the Croatian franchise, where he wore the ‘A’. Naturally, Bezina was among the best players for Medvescak. His imposing size, leadership, and two-way abilities made him a crucial player for the Bears. However, the Zagreb-based franchise hadn’t put together a good roster and failed to make the playoffs. Later that year, Bezina signed back with Geneve to finish the season in Switzerland. Despite just being turned 40, Bezina is set to play in Swiss’ second-tier league for the next season. 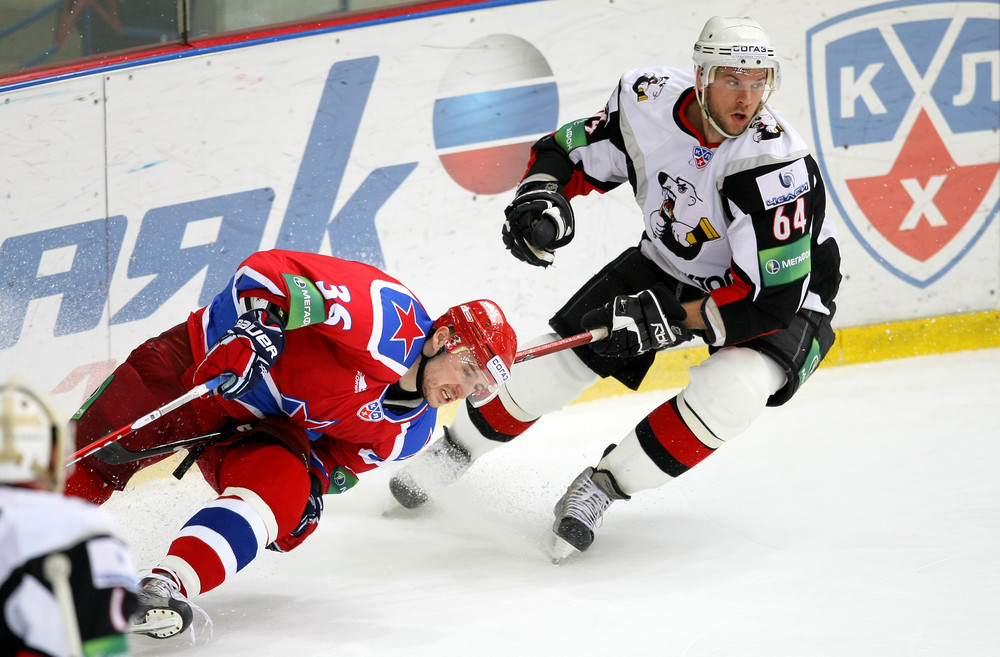 One of the best imports all-time in the league, Patrick Thoresen lifted two Gagarin Cups with two different teams and played in two All-Star games. Currently, Thoresen is the only import with Tony Martensson to have won two Gagarin Cups with different teams. Other international players had two triumphs, but with the same team — mostly Dynamo Moscow and Metallurg. Naturally, Thoresen also had several accolades in his two KHL stints at both league and the international levels. Thoresen helped Ufa winning their first and only Gagarin Cup in 2011 topping all international players with 66 points and leading the playoffs with 15 helpers. After triumphing with Ufa, Thoresen moved North to SKA to lift his second Gagarin Cup in 2015. Thoresen was a dominant player with a fantastic shot, an incredible drive, and excellent professionalism — all factored to make him a real face of the league still remembered today. Although he will turn 37 in November, Thoresen just topped the Norwegian league last year with 64 (21+43) points. He is set to continue at home for the 2020-2021 campaign.

If Slovenia only sent one goalie (Gasper Kroselj) and no defensemen to the league, the music is so different from forwards. Jan Mursak, Rok Ticar, Robert Sabolic, and Ziga Jeglic all significantly contributed to their teams.

Mursak was first hired in the KHL by Amur Khabarovsk. He didn’t last long in the Far East: after 12 goals in 36 games, he was traded to CSKA for their 2014 playoffs push. The Slovenian will play further three years for the Red Army, even gaining the ‘A’ on his sweater for the last campaign, when he had 20 (7+13) points in 33 regular-season games. For the 2017-2018 campaign, Mursak moved to Torpedo. However, he didn’t have much luck on the Volga river’s shores, as he was released after only 13 goalless games. He then moved to Sweden, where he returned this offseason after two years in Switzerland, where he helped SC Bern to claim the title in 2018-2019. 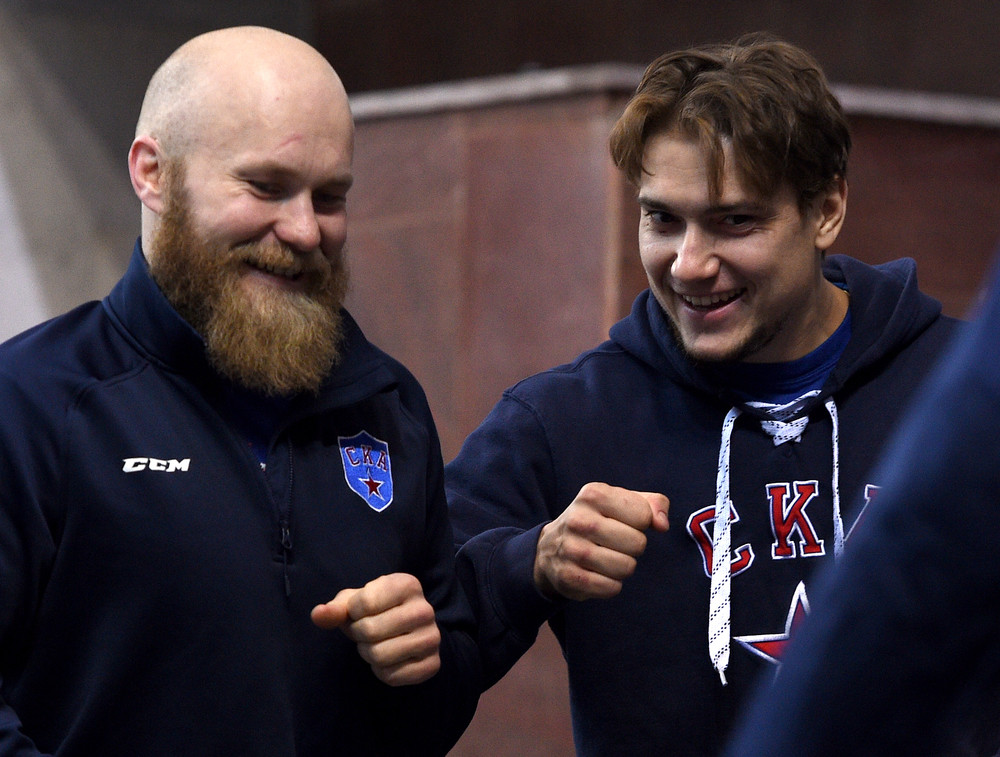 Rok Ticar also had an unfortunate spell with Torpedo, in the rocky 2017-2018 season, when he changed three KHL teams without delivering. However, just a year before, Ticar scored 15 goals with Avtomobilist — the second result among all the Motormen in 2016-2017. Before moving to the Urals, he scored more than 60 points in two years for Slovan Bratislava. However, his KHL career ended once he went goalless in 12 games with Kunlun in the early part of 2018-2019. For the 2020-2021 campaign, Ticar will return for another season in Austria.

Yet another Slovenian to have a stint with Torpedo, Robert Sabolic was excellent, especially in 2016-2017 for Admiral. In the Far East, he scored 44 (19+25) points in 58 regular-season games. Sabolic showed a strong game also with Torpedo, who helped to reach the postseason both times. However, it wasn’t enough to retain a spot in the KHL — he moved to Switzerland last summer. After an unfortunate season with Ambri-Piotta, Sabolic is currently a free agent.

The Slovenian forwards always showed great chemistry — especially with the national teams — and that’s why they were often signed together, particularly with Slovan Bratislava and Torpedo. Ziga Jeglic had great success as a playmaker in his first three seasons with Slovan, when he helped his teammates lightning the lamp a whole 50 times. However, everything changed when he moved to Russia. In Nizhnekamsk and Nizhny Novgorod, he couldn’t deliver, scoring only ten points in a season. A second stint in Bratislava also proved unsuccessful, with one goal and a pair of helpers in 32 games. Jeglic then moved to the Czech Republic and is currently a free agent. 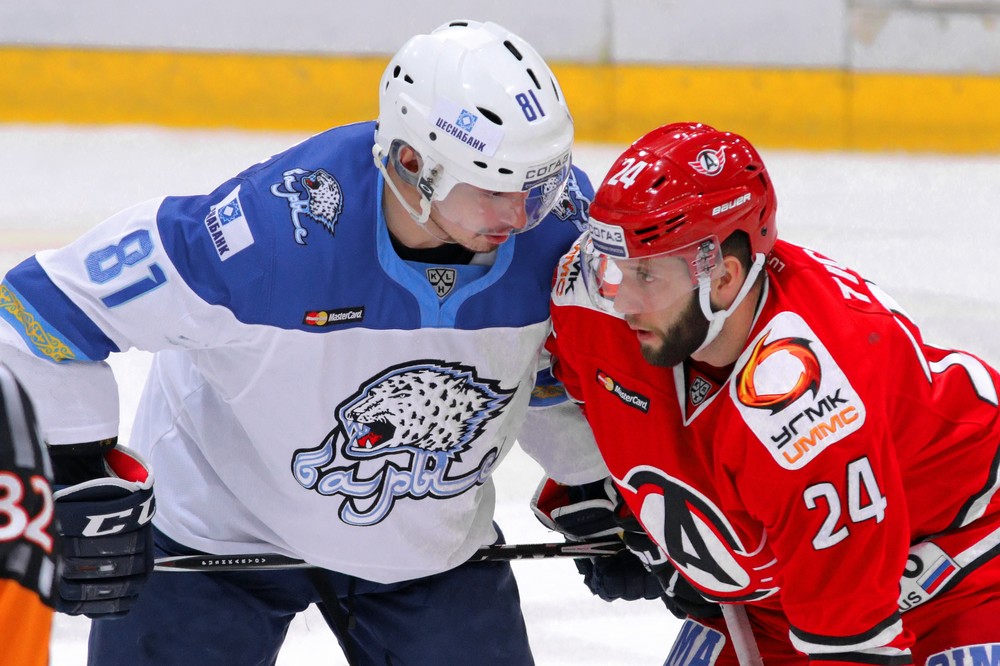