All four of these countries have had teams in the KHL. For Medvescak Zagreb and Kunlun Red Star, representatives of smaller hockey nations, the stats are unsurprisingly dominated by imports and dual nationals, with relatively few Chinese or Croatian natives making an impact. However, both Belarus and Kazakhstan have produced plenty of their own talent down the years. This article looks at the most successful players who began their KHL careers representing these countries.

Most wins in a single season

Vitaly Yeremeyev was a lynchpin of Kazakh hockey as his country took its first steps on the international stage. He made his pro debut for Torpedo Ust-Kamenogorsk in the final year of the Soviet championship and played for Team Kazakhstan u18s in the country’s first season after independence, a precursor of two Olympic call-ups and a host of World Championship appearances. Later he played for CSKA, Torpedo Yaroslavl and made a handful of NHL appearances with the Rangers before joining Dynamo Moscow. Here, he would win two Russian Superleague titles and establish himself as a club legend. When the KHL started, Yeremeyev continued in Moscow and his 21 wins in the inaugural season remains the best tally for a Kazakh-born goalie in the competition. He moved to Barys in 2010-2011 and played on for four seasons before taking on a goaltending coach position with the club’s juniors. Today he’s back at Dynamo, working with the Blue-and-Whites’ goalies.

By the time the KHL began in 2008, Perm native Vitaly Koval had already taken Belarusian citizenship and represented the country at the 2008 World Championship in Canada. Not surprisingly, then, he was Dinamo Minsk’s first choice goalie when the Belarusian team joined the league. But his best seasons came with Torpedo. In 2012, he had a GAA of just 1.75 across 30 regular season games before helping the team deep into the playoffs. Back for another year, he claimed 17 wins — the best KHL return for a Belarusian goalie. Koval ended his playing career in 2016 after a short spell with Vasteras in the Allsvenskan. He spent time as goalie coach for Dinamo Minsk and Team Belarus during the 2018-2019 season. 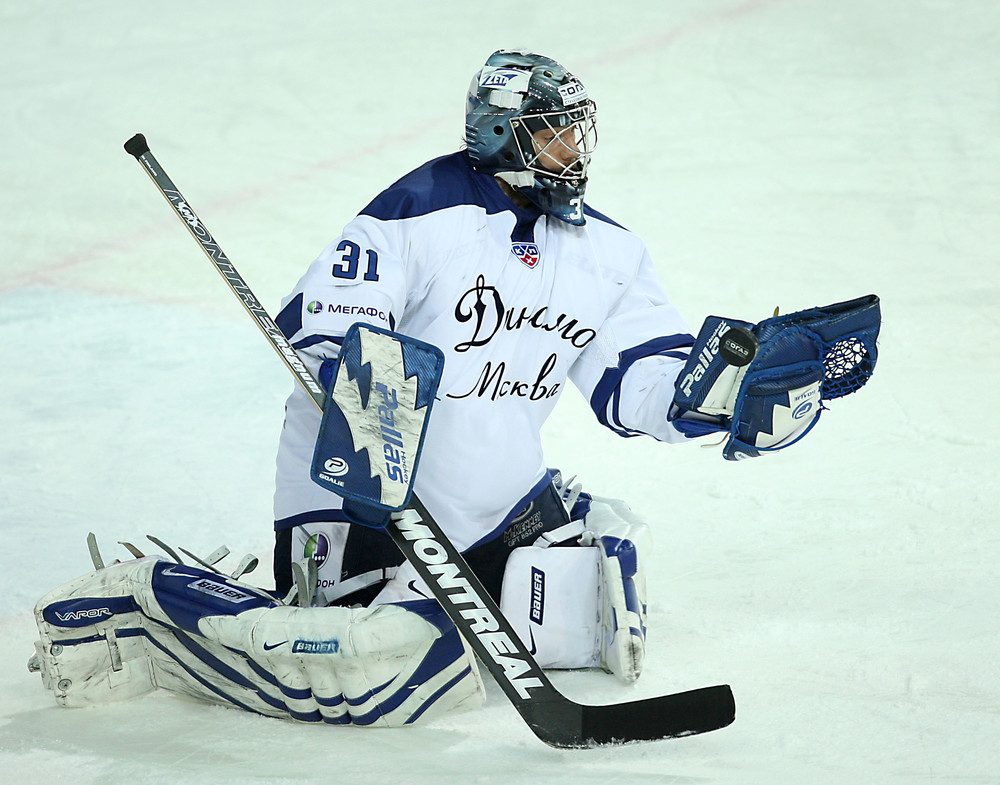 Most shut-outs in a single season

Vitaly Kolesnik is another graduate of the Torpedo school in Ust-Kamenogorsk, famed for its contribution to Kazakh hockey through the ages. He proved a natural replacement for Yeremeyev, and remained with his hometown club until 2005, when he went to try his luck in the NHL with Colorado. On his return to Europe he joined Atlant and made an eye-catching start in 2008-2009 with five blanks in 30 games and a GAA of just 1.59. That brought a move to Salavat Yulaev, where he repeated his five shut-outs the following season. Later in Ufa he was part of the 2011 Gagarin Cup-winning roster. He continued with three seasons at Lokomotiv — keeping that GAA below 2.00 throughout — before finishing his career with Barys in 2017.

China has produced one KHL goalie. Harbin-born Sun Zehao came off the bench for two games during the 2018-2019 season. So far, he’s yet to record a win or a shut-out, but aged just 24 he has time to develop. 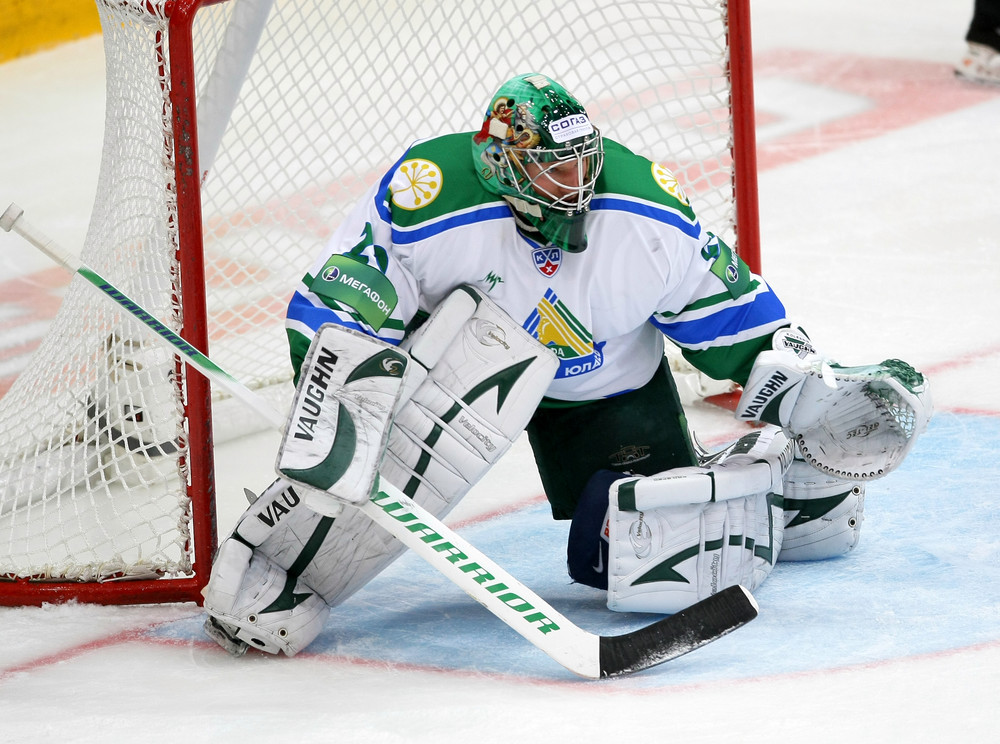 Dinamo and Barys have both enjoyed the services of high-scoring defensemen, but the biggest producers, from Dallman and Dietz to Bailen and Gragnani, have tended to be imports. However, local players have contributed as well, Evgeny Lisovets leading the way for Belarus and Roman Savchenko taking the honor in Kazakhstan.

Lisovets tops this list. The Grodno native learned his trade with his hometown team, Neman, and earned his first international call-ups in 2012-2013 while playing in the Belarusian championship. That got him a chance at Dinamo, where he steadily secured his reputation for club and country. He most productive season to date was his last in Minsk; in 2018-2019, his 24-point haul had him fifth in team scoring, just behind fellow blue-liner Patrick Wiercioch. That helped him to move to Salavat Yulaev, where the 25-year-old is set to continue next season.

Savchenko, another from Ust-Kamenogorsk, made his KHL debut shortly after his 20th birthday, suiting up for Barys in that inaugural season. He started out in the third pair, but soon moved up to be part of the first-choice defensive unit. His most productive season came in 2012-2013 when he picked up 20 points. After 10 seasons with Barys, Savchenko moved to Sibir for 2018-2019 and saw his productivity drop alarmingly. However, a summer switch to Lokomotiv got him back on track and he’s set to continue in Yaroslavl next season. 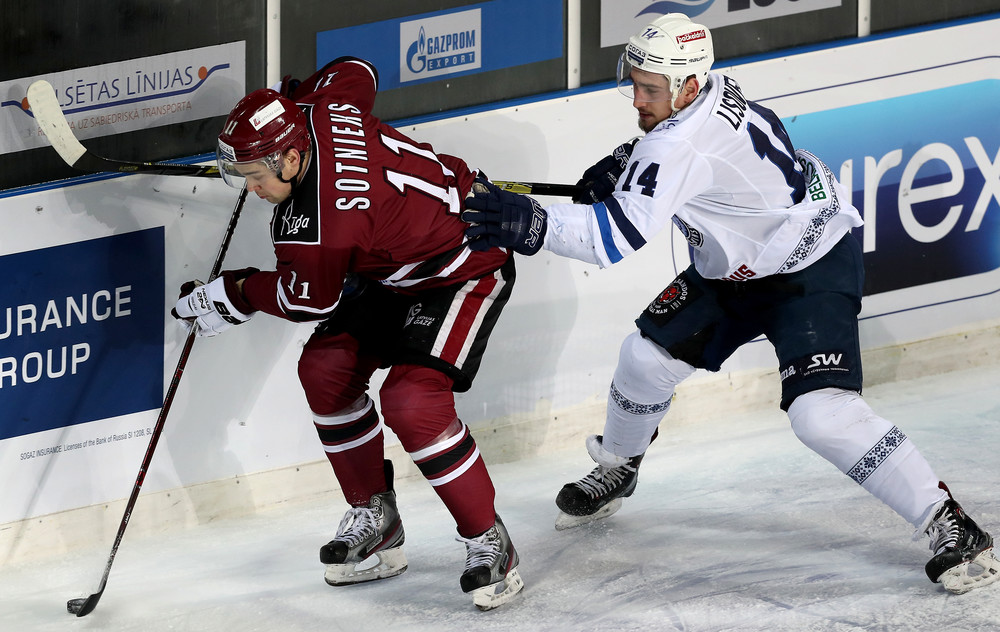 Best plus / minus in a single season

The top plus / minus ranking goes to Kazakh veteran Vitaly Novopashin. After emerging from the Torpedo school in Ust-Kamenogorsk, he moved to another Torpedo in Nizhny Novgorod during the 1990s. That began a connection that lasted more than a decade, albeit interrupted with stints in Ufa and Novokuznetsk, before Novopashin came back to Kazakhstan to play for Barys in 2010-2011. He first season in Astana saw him set his +/- record; he stayed for two more years as alternate captain before ending his KHL career with two seasons at Atlant. Last November, though, it was reported in Kazakhstan that the 41-year-old was back on the ice — in the unlikely surroundings of the Philippines, playing for Manila Chiefs in the local championship.

The leading Belarusian is Vladimir Denisov. This combative, hard-working defenseman came to the KHL after a couple of seasons in the AHL. At first, he played for Dinamo Minsk, then moved on to Torpedo and Ak Bars, where he set his +/- record in 2014-2015. The same season saw Denisov lead the KHL in hits — 227 — while 2015-16 saw him appear at the All-Star Game. He left the league in 2018 after a season as captain in Minsk and ended his career a year later after playing his final campaign with SaiPa in Finland. 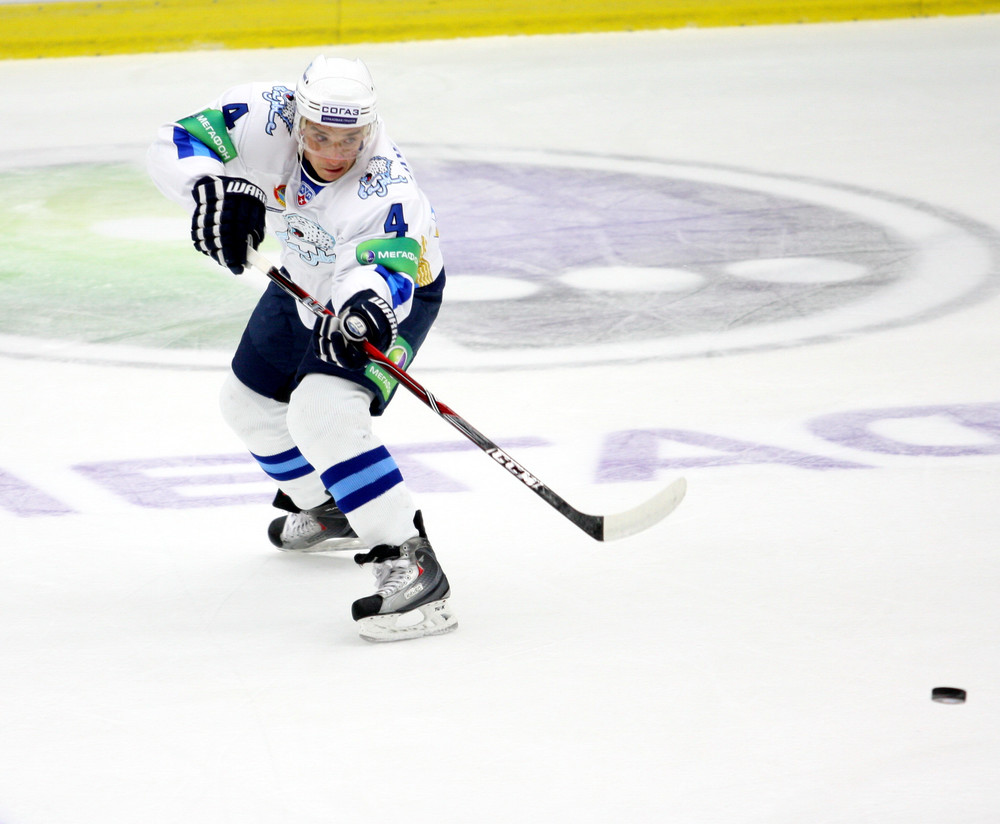 The Kostitsyn brothers, Andrei and Sergei, have been key figures in Belarusian hockey over the past decade, so it’s no surprise to find one of them on top of this chart. Andrei, the elder, arrived in the KHL after a distinguished career in North America. He was part of the 2007 Calder Cup winning roster in Hamilton before completing almost 400 NHL games, mostly with Montreal. He came to the KHL in time to help Traktor to the 2013 Gagarin Cup final, but his most productive season began slowly — just two assists in nine games at Torpedo. A move to Sochi revitalized Kostitsyn’s game; he finished with 41 points, the best single-season tally for a Belarusian forward.

Starchenko is a great servant to Barys and Kazakhstan, so it’s fitting that he finds his place on this list. The 34-year-old has represented Barys in all 12 KHL seasons so far and has played more than 100 games for his country. His best KHL season came in 2018-2019, when his 39 points made him the leading Kazakh-born player on a team dominated by imports and dual nationals. His form earned him a first All-Star call as well. Starchenko remains with Barys and as he prepares to start his 13th season at the club, he is one of a dwindling band of players to have spent the entire KHL era with one organization.

Zagreb native Borna Rendulic learned his hockey within the Medvescak youth system — but he never played for his hometown team in the KHL. As a teenager he left for Finland and while the Bears were in the KHL, Rendulic was becoming the first Croatian-trained player to appear in the KHL, making 15 appearances for Colorado and Vancouver. In 2017-2018 he returned to Europe and came to Vityaz during the campaign. The solidly-built winger did enough in a half season to earn a recall for 2018-2019, where he produced he best figures in the league. Last season, he played in Germany with Adler Mannheim. 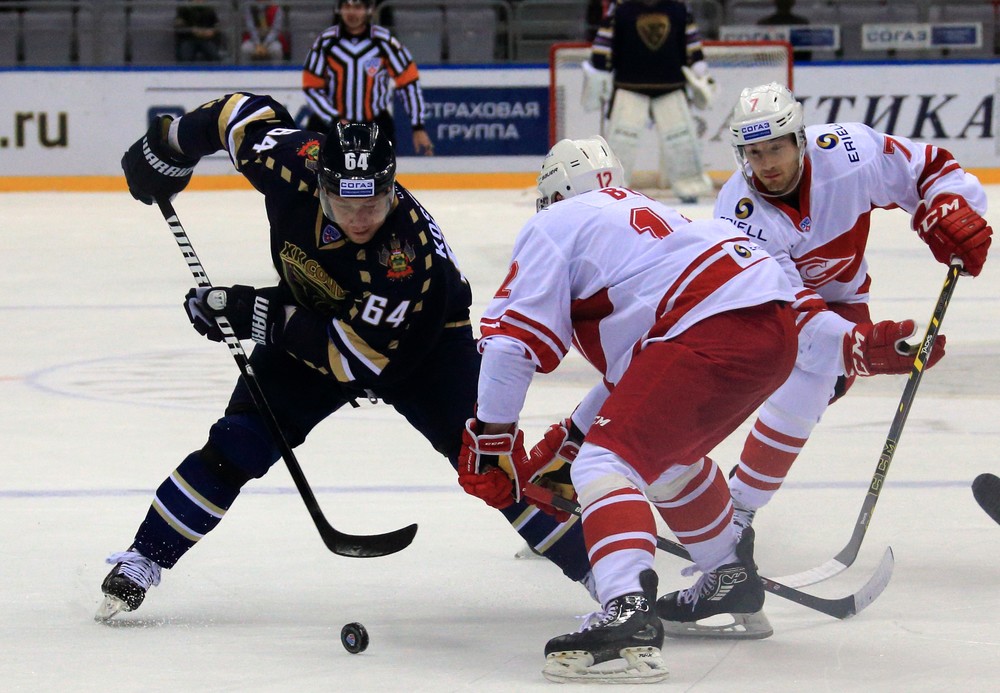 Kostitsyn and Starchenko feature once again here, although the former’s 20 goals in 2015-2016 can’t top Alexander Materukhin’s 22 goals a year later. However, although Materukhin was a naturalized Belarusian who played for the national team — much like Geoff Platt, Kevin Lalande and many others — when he came to the KHL with Donbass Donetsk he was a Ukrainian player and his twice represented his nation of birth while playing in the KHL.

Rendulic is here as well, representing Croatia. But there’s also a place for a player with just one goal in his KHL career. Chinese youngster Rudi Ying was something of a poster boy for his country’s hockey prospects when Kunlun joined the KHL in 2016. A star of the national junior program — he captained the u20s in its 2016 World Championship campaign, scoring 19 points in 10 games — he played 25 games in the KHL without registering a point. Subsequently, Ying spent more time playing the VHL but he made a return to the big league towards the end of the 2018-2019 campaign when new head coach Curt Fraser wanted to look at the depth on his roster. When Ying scored on Admiral Vladivostok in February 2019, he became the first Chinese-born player to find the net in the KHL. Still only 21, and something of a cult figure at home due to his appearances on reality TV show ‘Ice Hockey Hero’, he could be a significant part of the future of Chinese hockey. 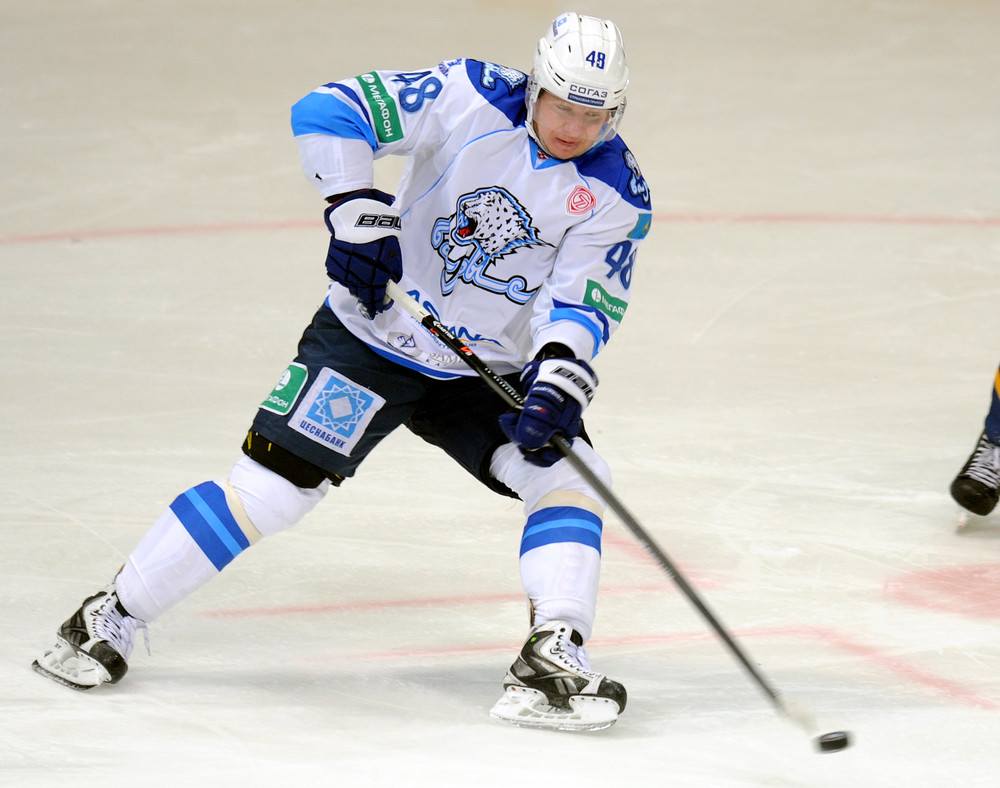 Alexei Kalyzuhny looks to be a shoo-in for the Belarusian Hockey Hall of Fame. A kingpin of the national team for more than a decade, he has 56 points in 78 elite pool World Championship appearances and was named in the IIHF’s All-Time Belarusian World Championship team earlier this summer. In club hockey, he won back-to-back Russian Superleague titles with Dynamo Moscow and Metallurg Magnitogorsk, and wore the ‘C’ at Dynamo, Lokomotiv and finally Dinamo Minsk. His most productive seasons came before the KHL started — 63 points for Avangard in 2006-2007 was a career high — but in his final years in Minsk Kalyuzhny finished with a flourish. He 27 helpers in 2014-2015 set a Belarusian record.

In Kazakhstan, Vadim Krasnoslobodtsev set the pace in the league’s debut season. He compiled 36 points for Barys as he calmly negotiated the step from Russia’s second tier to the top flight and his 24 helpers remain a national record. The left winger stayed with Barys for five seasons before moving to Torpedo and later Admiral, continuing to score solidly without reaching the heights of 2008-2009 again. His most recent action came in 2018-2019 when he played in Romania with Csikszereda. 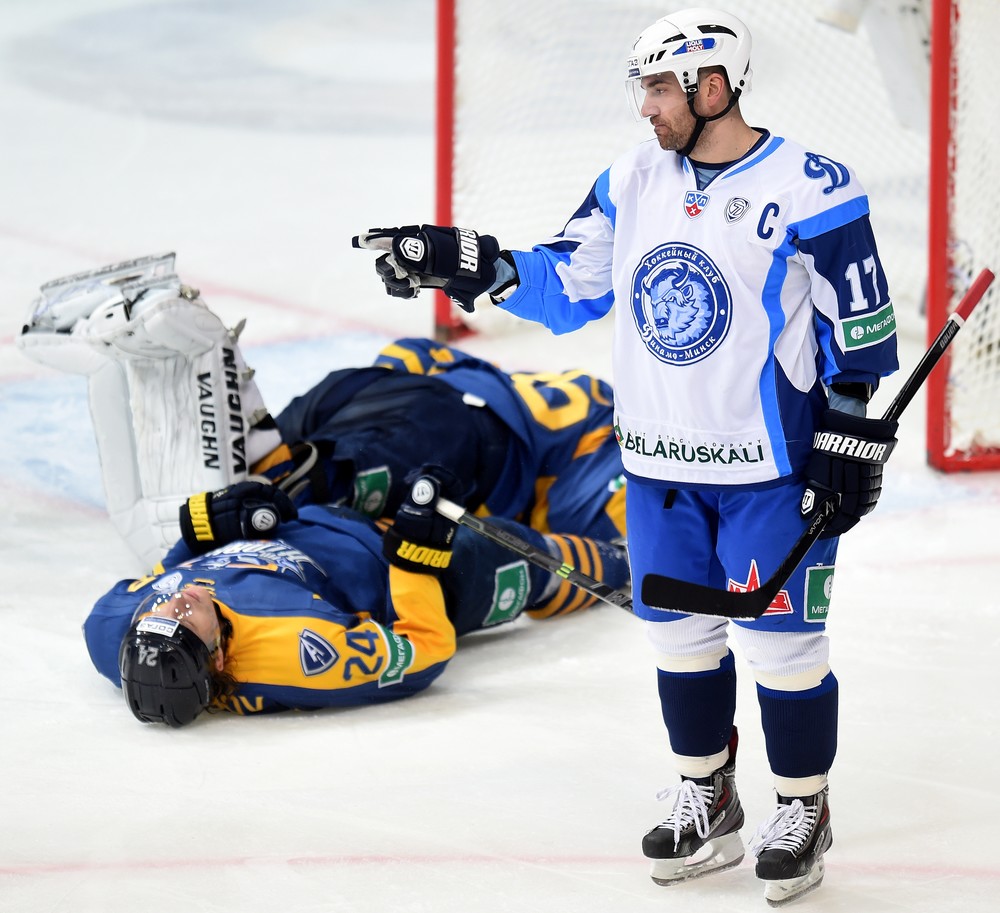