June brings a new series, delving into the archives to bring the leading KHL players from the different countries that have contributed to the league since 2008. Today, the talk is about four countries. Austria, Norway, Slovenia, and Switzerland didn’t give the KHL a lot of quantity. Still, the quality often was outstanding as some of the best-ever performers in the league come from these countries.

One of the only two Austrian players who came to play in the KHL, Bernd Bruckler spent three seasons in Russia with Torpedo and Sibir. After adjusting to the new reality in the first season, Bruckler had a fantastic season in 2010-2011, with 22 wins and four shutouts. The Austrian netminder posted a winning season at that time, but it wasn’t enough for Torpedo to qualify for the postseason.

A seasoned veteran with substantial NHL experience under his belt, Martin Gerber only played one season in Russia, backstopping Atlant in the 2009-2010 season. The Swiss goalie, who represented his country at the IIHF World Championship and Olympics level, was excellent for the Moscow Region franchise. Still, after a solid campaign, he returned to North America.

Differently from Bruckler and Gerber, the Norway-born Lars Haugen never played in North America and adjusted to his new reality with a prolonged stint in Dinamo Minsk’s farm team in Belarus. However, he quickly outgrew the competition and became a reliable option for Minsk between the piping. In the 2014-2015 season, in particular, he posted 15 wins, helping the Belarus franchise reach the postseason. However, after his best season in the KHL, Haugen left the league to sign in Sweden. After winning the Austrian title in 2018-2019, for the 2020-2021 season, Haugen signed back home in Norway. 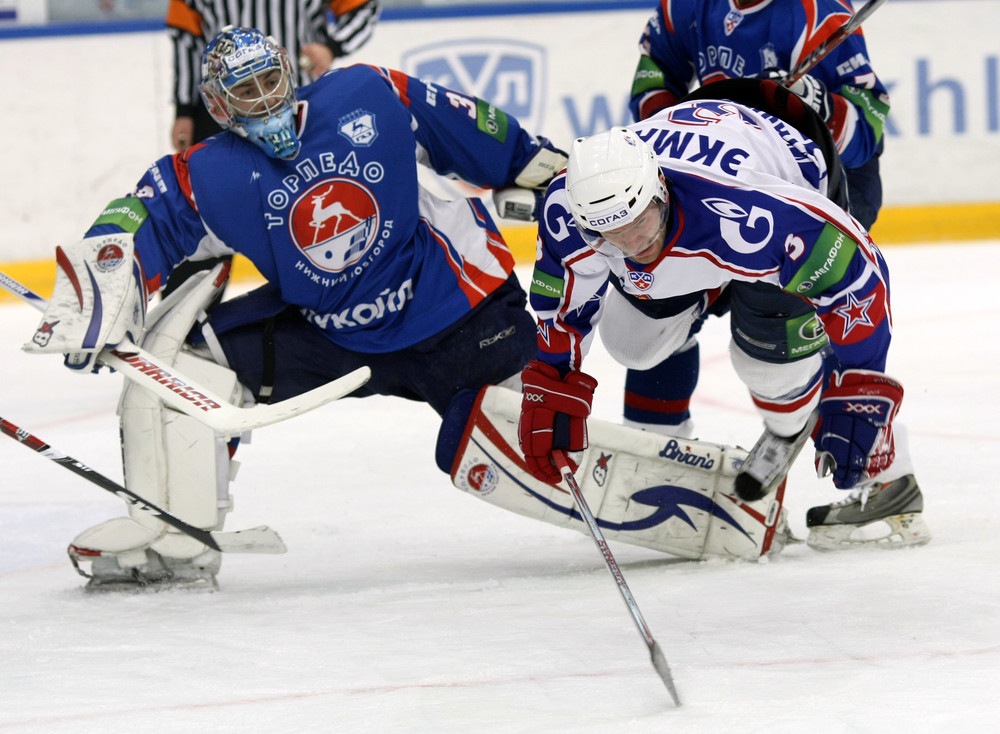 Most shutouts in one season

Other than other achievements, Bruckler shares with Ak Bars’ Anders Nillson the record for most assists in one season with four — achieved in 2011-2012 with Sibir. The Graz-born netminder had his last KHL game on Feb. 24, 2012. Since then, there have been no more Austrian players at all in the league. Only defenseman Andre Lakos also stepped up and played in Russia with Traktor Chelyabinsk between 2008-2010.

“Most of our national team players stayed home and played in the EBEL, there are few in Scandinavia,” Bruckler told KHL.ru before last year’s KHL World Games in Austria. “Probably, some of the players could make a step up, but again they are now exactly where they should be. Our hockey is still growing; we are trying to make our national league better. The national team has been up and down at every World Championship, but this season they stayed in the elite pool.”

“I cherish my time in Russia,” he added. “It was three seasons, I started a fourth, but then they let me go. I’ll never forget this time.” 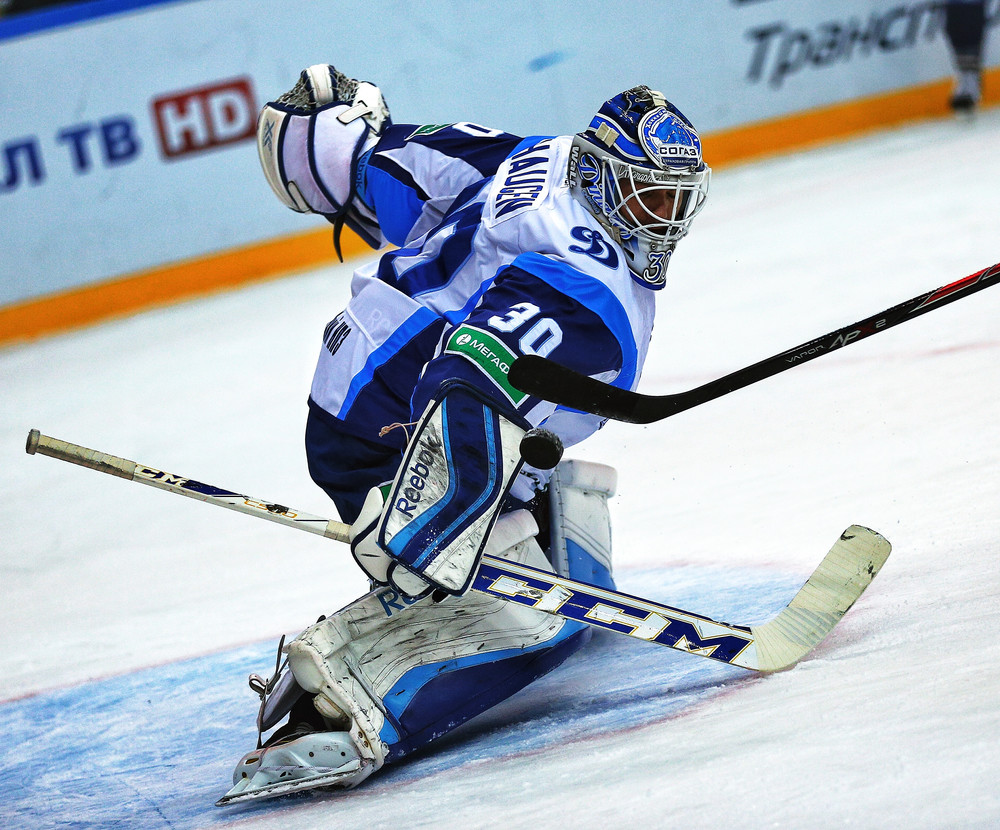 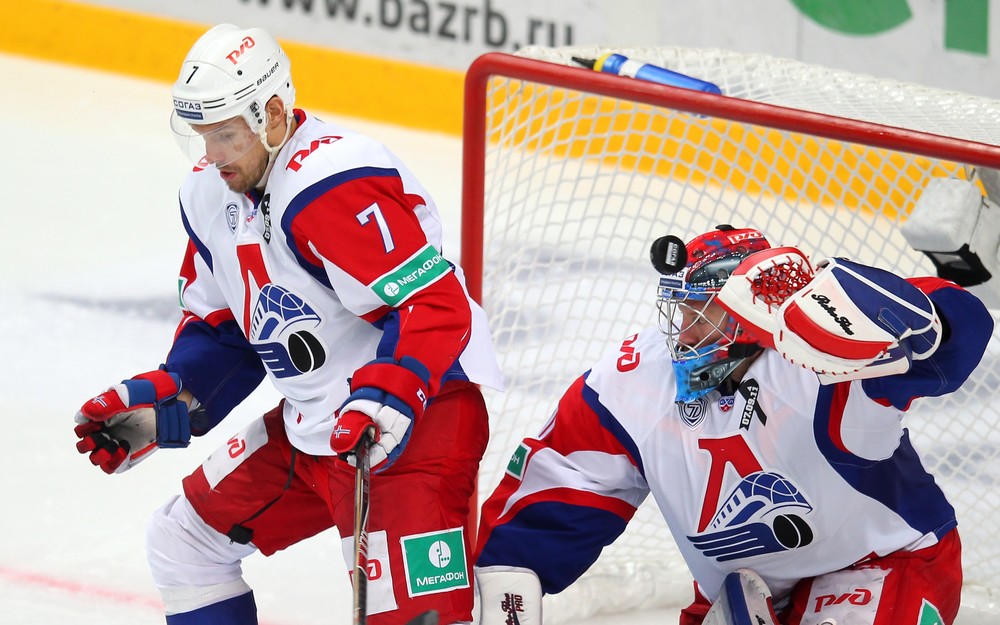 A very experienced player, Jonas Holos came to the KHL at a relatively young age, signing with Lokomotiv in his 26. Many expected the Norwegian to play many seasons in the league, maybe not at the same level as Patrick Thoresen, but still as a solid KHL regular. This never happened, although the native of Sarsporg had two strong campaigns with Lokomotiv Yaroslavl between 2013-2015. In particular, he was solid on the blueline and posted impressive numbers, reaching the double-digit in goals and avoiding a negative plus/minus rating. However, in his second year in Yaroslavl, the Railwaymen had a disappointing playoff and decided to part ways with several players, including Holos. The D-man then signed in Sweden, where he is still playing after an experience in the Swiss top-flight league.

Goran Bezina signed in the KHL being 36 — one of the oldest-ever import players to sign a deal in the league. However, his age didn’t notice on the ice, and he was one of the few positive notes for the Croatian franchise in its last dance in the KHL before returning to the Austrian league. 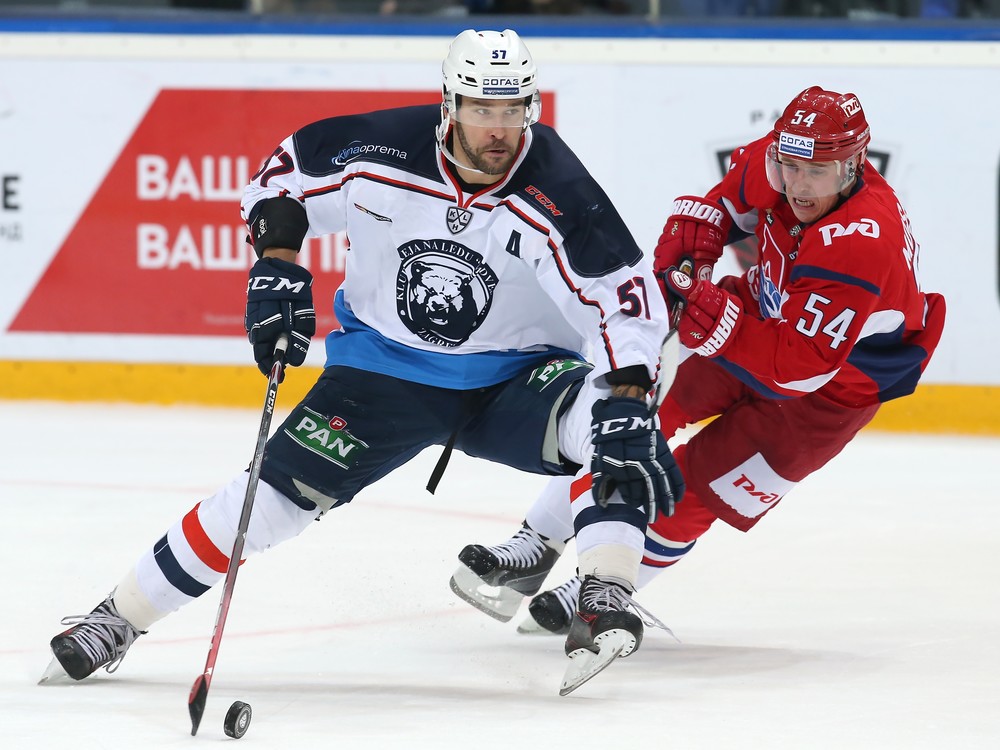 In his first stint in the KHL, Thoresen, in his prime, was one of the best players in the league. He was unstoppable, in particular with Salavat Yulaev. Thoresen helped Ufa winning their first and only Gagarin Cup in 2011 topping all foreigners with 66 points and leading the playoffs with 15 assists. After his triumph in Ufa, Thoresen moved to SKA, where he will lift his second Gagarin Cup in 2015. A two-time All-Star, Thoresen was a dominant player with a fantastic shot, an incredible drive, and excellent professionalism — all factored to make him a real face of the league, one of its best players and personalities.

Robert Sabolic was one of the best players in Admiral’s early years. He managed to outscore all his fellow countrymen in single-season numbers — including a few notable players like Jan Mursak and Rok Ticar. In 2016-2017 he led Admiral with 44 (19+25) points, helping the Far East franchise reach the postseason. Sabolic was also excellent for Torpedo, where he played one season and a half. 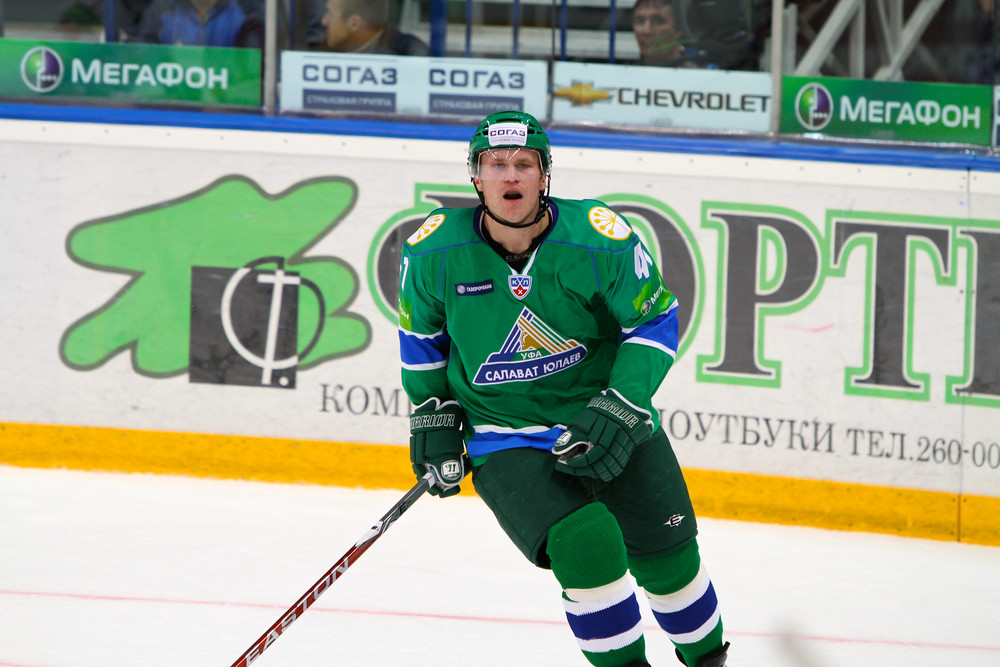 It’s not a surprise that Thoresen and Sabolic lead the way in goals as well. After winning two Gagarin Cups, more than most of the other high-profile imports who played in the KHL, Thoresen played in Sweden and Switzerland before returning home, where he will play next year. His father, Petter, is the head coach for the Norwegian national team, with which Patrick played 11 IIHF World Championships.

After lighting the lamp for Admiral and Torpedo, Sabolic left the league in 2019 to sign in Switzerland. The Slovenian veteran is currently seeking new opportunities for the upcoming 2020-2021 season. 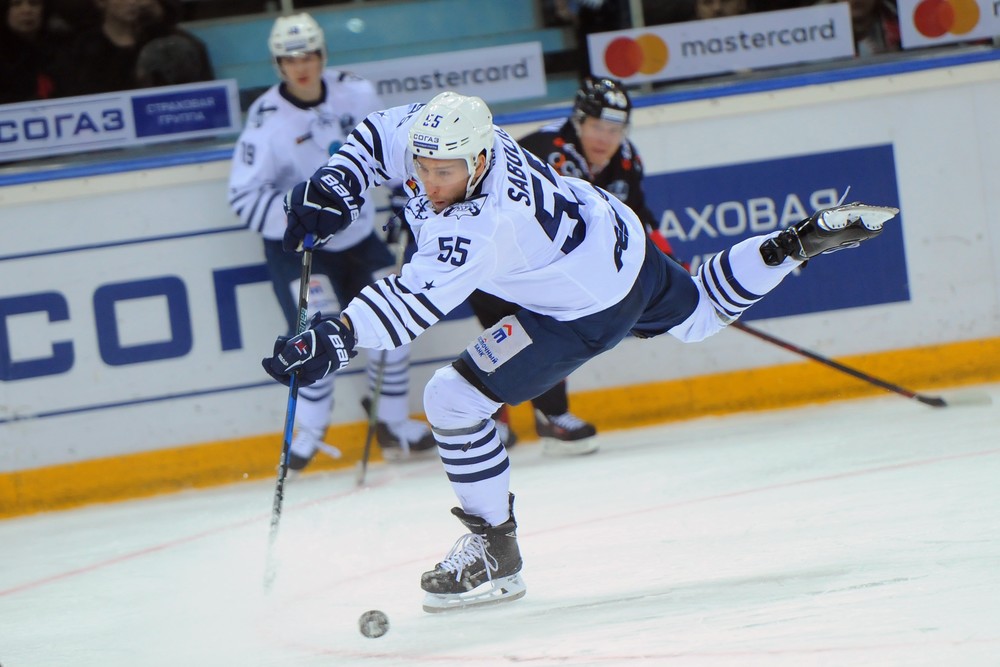 One of the best players ever produced by Slovenia, Mursak first signed in the KHL with Amur in 2013. However, he didn’t last long in the Far East, being acquired by CSKA in late December. In those years, CSKA wasn’t a powerhouse like it is today and often struggled in the playoffs. Its best run in the middle 2010s was in 2014-2015 — which was also the best season for Mursak. That year, CSKA had a 3-0 lead over SKA in the Conference finals but had to surrender 4-3 in the series as Patrick Thoresen netted the game-winner for SKA with less than ten minutes to go in the seventh clash. Mursak then moved to Torpedo for the 2017-2018 season, but after a disappointing start, he was left free to seek another team, and he signed in Sweden. The Slovenian international will line up in the SHL for the next season. 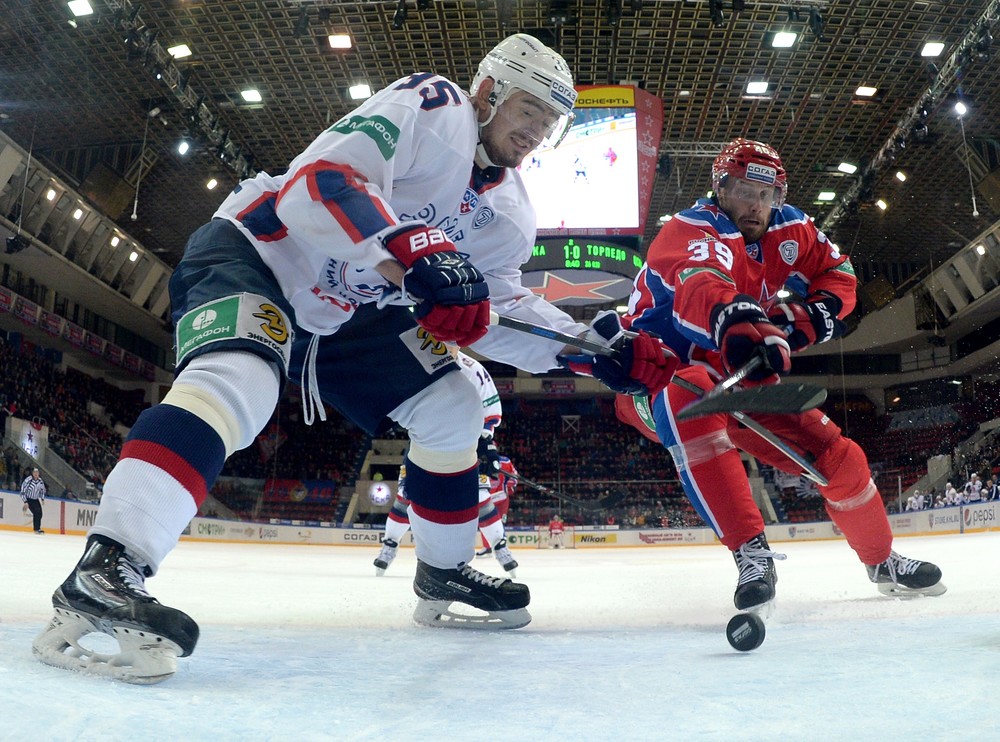