How strong has the Czech influence on the KHL been? Well, strong enough to ensure that the talents of Jaromir Jagr, Jiri Hudler and Roman Cervenka only get a passing mention on this list of the best single-season performances by Czech players in 12 seasons of KHL action. Even legendary goalie Dominik Hasek only just makes the cut. However, it’s also a list tinged with sadness — two of the most productive Czech players in the KHL lost their lives in the Lokomotiv air disaster, along with another Czech star, Josef Vasicek.

Jakub Kovar is part of the furniture in Yekaterinburg, where he has been with Avtomobilist since 2013. The Pisek native spent one season with Severstal in 2016-17 but has otherwise been a fixture between the piping for the Motormen. It says much about the 31-year-old’s importance to his team that he has backstopped Avto to the playoffs every year since his arrival; the one time the club missed out was while he was in Cherepovets. His best season so far came in 2018-19, when he set a KHL record 38 wins as Avto topped the Eastern Conference.

Kovar’s tally puts him way out in front among his compatriots. Second on the list is Alexander Salak, 10 wins behind. However, Salak’s achievement in 2014-15 is also notable. Unusually, he produced some of his most consistent form in a season that saw him move from SKA to Sibir midway through the campaign. He finished with his wins evenly split between his two employers and got to 28 victories in just 40 games before helping the Siberians to the Eastern Conference final.

Most shut-outs in one season

Eight is the magic number when it comes to shut-outs, with three goalies managing that tally in four campaigns. Jakub Kovar has done it twice, Dominik Furch got there in 2016 but the first on the list was Martin Prusek in the KHL’s inaugural season. Prusek had played in Russia before, half a season with SKA in the Superleague, but made a steady start to his KHL career at Spartak. A trade during the season took him to Dinamo Riga, and it all took off for him. Six shut-outs in Latvia helped Prusek secure 10 victories in 20 games, elevating his season from the adequate to the eye-catching as his save percentage leapt from 88.6 to 94.1. It earned him another year with Riga before he played out his final season as a player at hometown team Vitkovice in Ostrava. The 44-year-old is still at the club as goalie coach and, for the coming season, team manager.

Furch was another goalie who peaked in his first season in the KHL. He came to Avangard from Slavia Prague and made an impressive start in his rookie campaign, vying with Alexander Salak for the status of top Czech. He did well for two more seasons in Omsk, never seeing his GAA go over 2.00 but found things harder after a move to Severstal in 2018-19. Last season the 30-year-old was playing in Sweden for Orebro.

And it would be wrong to look at top Czech goalies in the KHL without giving an honorary mention to the Dominator. In 2010-2011, Dominik Hasek played his final season with Spartak Moscow. His seven shut-outs proved that the hero of Nagano still had what it takes on his farewell tour.

Karel Rachunek came to Russia after plenty of NHL experience — and was one of the stars of the early years of the league. Indeed, had it not been for the Yaroslavl air disaster, this Zlin native could have placed himself among the all-time leaders in KHL scoring; Rachunek would have turned 40 last summer. Lokomotiv was Rachunek’s first club in Russia, starting with a cameo in 2002-2003 then returning for part of the 2004-05 lock-out season and staying for another year. However, he started his KHL career at Dynamo Moscow, getting two All-Star calls and helping the Czechs to World Championship gold in 2010. Then came the return to Yaroslavl and a great season: his 46 points led the scoring among D-men in 2010-11 and he continued that form in the playoffs, posting 13 (5+8) points to lead the scoring charts once again. World Championship bronze followed, but that tournament in Slovakia proved to be his last action. On Sep. 7, 2011, aged just 32, he was among those who lost their lives when Lokomotiv’s plane crashed shortly after take-off as the team headed to its opening game of the season.

For Jakub Jerabek, an impressive first season at Vityaz proved to be a career springboard. The Plzen-born 29-year-old helped the Podolsk team to its first KHL playoff appearance and was invited to the All-Star Game along the way. The amply vindicated Jerabek’s decision to leave his hometown team after eight seasons in the Czech league. His success in Russia attracted attention in the NHL and he moved to Montreal. Late in the season he was traded to Washington and made two playoff appearances at the start of a run that saw the Caps lift the Stanley Cup for the first time. However, a second season in North America saw the Czech spend most of his time in the AHL and he returned to Vityaz in 2019.

Rachunek and Jerabek lead the way here as well, although the latter’s best goal haul came a few years after his most productive season. Just behind these two come a clutch of players on nine goals. Two will feature in the next category, while Vojtech Mozik of Vityaz and Jakub Nakladal of Lokomotiv continued their clubs’ successive association with the Czech Republic.

Miroslav Blatak was a big part of the Salavat Yulaev team that won two Russian championships in four years. His first season in Russia brought him to Ufa in time to lift the last Superleague trophy in 2008 and he was still at the club in 2011 when Salavat won the Gagarin Cup. During that time, he produced an impressive +33 rating in 2009-10, making him the most successful Czech according to that metric. After leaving Ufa, Blatak went to Avangard — making a notable glove save to deny an empty-net goal at Ugra along the way — and finished his KHL career at Severstal in 2016.

Jan Kolar first arrived in the KHL with Donbass and was part of the Ukrainian team for both its seasons in the league. His most productive campaign came after swapping Donetsk for Vladivostok — in 2014-15 he had his most productive campaign with 23 points for Admiral, and his +23 ranking places him second on this list. It was a solitary season in the Pacific port, with Kolar moving to Amur after one year. He spent four campaigns with the Tigers, wearing the ‘A’ each time and going to the 2018 Olympics. He played last season back home with Dynamo Pardubice and is set to continue there next term.

It says much for the depth of Czech talent in the KHL that the likes of Jaromir Jagr and Jiri Hudler don’t feature among the most prolific of their countrymen. Both had impressive seasons in their time, but neither could keep pace with this Metallurg duo. Jan Marek set the pace in the KHL’s first season, putting up 72 points to make himself the highest-scoring import in the league. It wasn’t Marek’s first distinction with Magnitka; earlier he helped the Steelmen to Superleague glory in 2007. Only Sergei Mozyakin had more points in that inaugural season and later the two joined forces at Atlant to take the team to the 2011 Grand Final. That brought a move to Lokomotiv, but Marek would never play a competitive game for his new club. Like Rachunek and fellow Czech forward Josef Voracek, he died in the Sep. 7 plane crash.

Center Jan Kovar, brother of goalie Jakub, was a model of consistency in his time at Metallurg. He started with a 68-point season as Mike Keenan led the team to the Gagarin Cup, then produced the same return in 2014-15. On both occasions he was the league’s top-scoring import. In 2016 he won a second Gagarin Cup, in 2017 he was the playoffs top scorer with 25 points. He finally slowed down a little in 2017-18, but still got an Olympic call before heading across the Atlantic to try his luck in the Bruins organization. That spell saw him limited to AHL action before returning home to play for Plzen. Kovar is currently on the roster of Swiss team HC Zug.

Marek’s prolific campaign back in season #1 also puts him on top of the goal scoring records for Czechs. However, he has to share top spot here with Pavel Brendl. A natural goalscorer who didn’t quite get the break in the NHL (11 goals in 78 games, mostly with the Flyers), he was a demon sniper with Torpedo when the KHL got started. In two seasons with the club he tallied 62 goals in 107 games, but there were always questions marks about his defensive contribution and that arguably denied Brendl the chance to move to a major contender in the league. He left in 2010 to play in Finland, returned briefly to Neftekhimik, then saw his career steadily drift down the levels. His final season came in 2018-19 when he played in Finnish Division II with Kopla. He had 15 points in five games there to help win the divisional title but retired at the end of the season.

Since that opening campaign, only two Czechs have scored more than 30 goals in a season. Roman Cervenka had 31 in 2010-11, and Dmitrij Jaskin matched that tally this season.

Playing alongside Sergei Mozyakin and Danis Zaripov undoubtedly played a big role in propelling Kovar to the top of this chart. Any center would be thrilled to have such reliable marksmen to convert the chances he created — and it’s perhaps not surprising that Kovar also comes third on this list with 40 helpers in 2016-17. Marek’s 37 assists in 2008-09 makes him Kovar’s closest rival, with Jiri Hudler next on 35 feeds during his time at Dynamo. Vasicek, Jagr, Cervenka, Lukas Kaspar and most recently Dmitrij Jaskin are the other Czechs with 30+ assists in a KHL season. 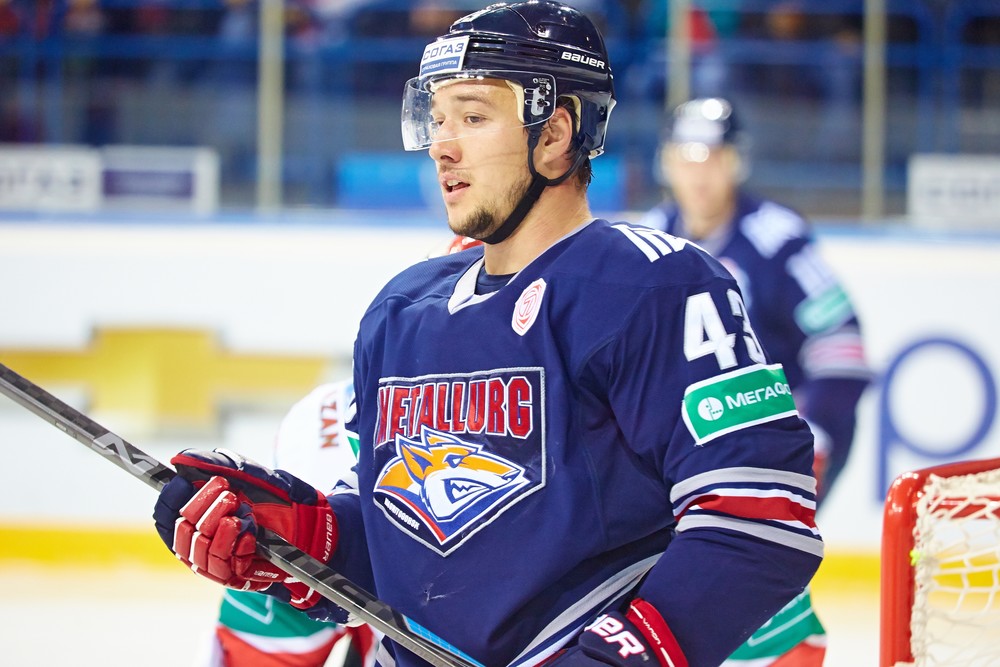