Ice Diaries: Notes on a Championship

A reporter’s notebook from a season unlike any other for the KRS Shenzhen Vanke Rays.

When the KRS Shenzhen Vanke Rays lifted the WHL Cup after a three-game sweep in Ufa last week, their victory represented an achievement far more universal than what was inscribed on the trophy itself. Russia’s adoption of the club after the folding of the Canadian Women’s Hockey League (CWHL) in 2019 increased the competitiveness of the WHL, while simultaneously providing a home for a roster of Olympians and Olympic hopefuls. The success of the Vanke Rays—while perhaps not immediately obvious—represents a step toward a new paradigm: a club that trends closer to giving female athletes what they deserve, versus a settlement for the lowest iteration of their hopes.

As a locker room reporter for the Kunlun Red Star organization across two seasons, I have watched the Vanke Rays’ ascent from the inside. Here is some of what I’ve observed about the most unique hockey project in the world. 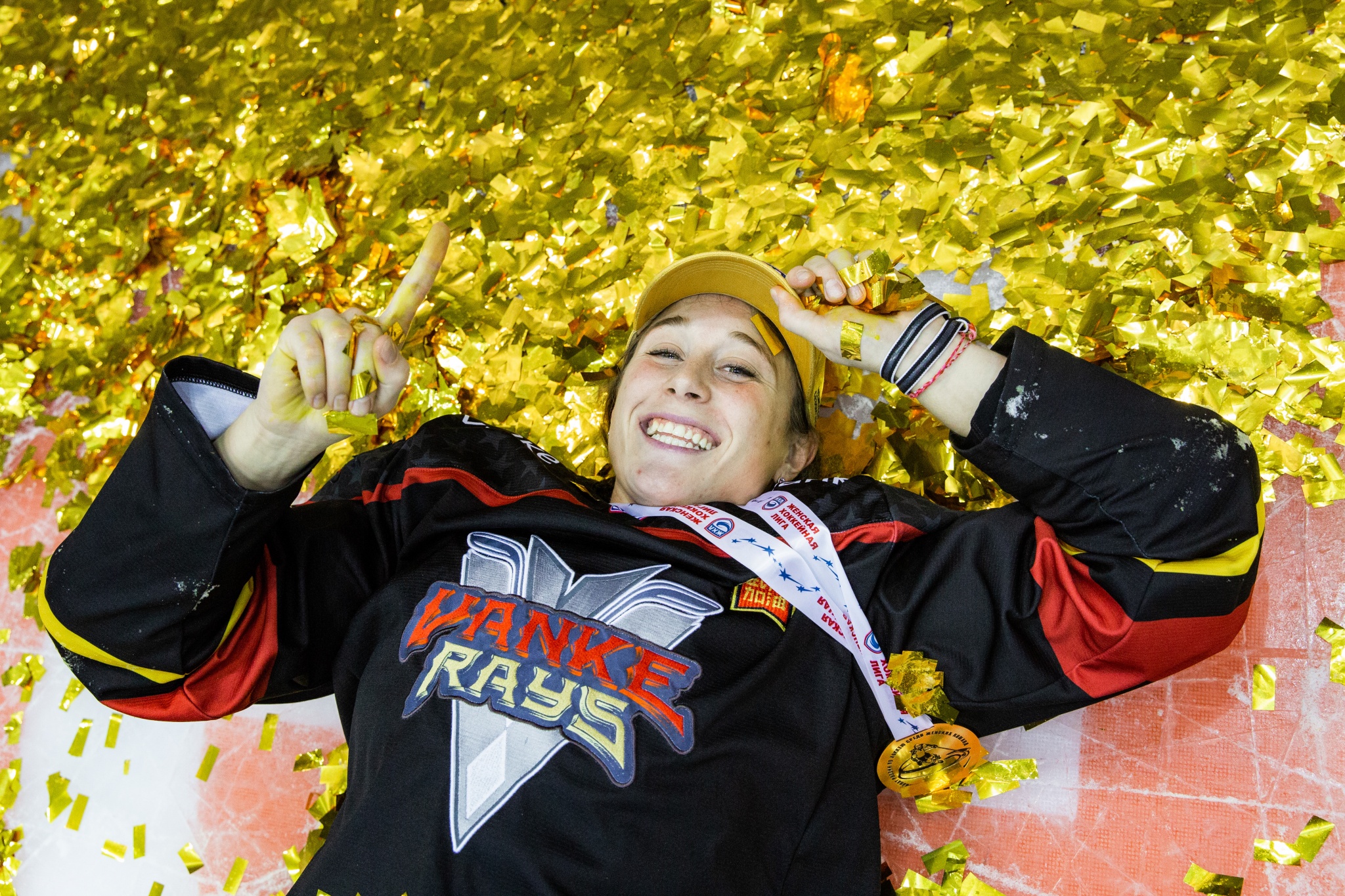 The Shenzhen Universiade Arena complex was modeled after a crystal. Its jagged edges pierce a hazy, indigo sky in the Longgang district of China’s tropical tech hub. Faceted glass panels glow in prismatic splendor at night, reflected in artificial lakes that surround the futuristic complex. Built in 2011 for the Summer Universiade, the arena now plays host to a three-year-old hockey club that shoulders two enormous missions: to shape the future of women’s ice hockey in China, and to set a new standard of professionalism for women’s hockey around the world.

What is fascinating about the Vanke Rays’ role in women’s hockey is that the onus does not strictly fall on the organization itself. The team’s players are hired as “ambassadors”—rather than hockey players—with an aim to develop Chinese nationals who may someday represent their country at the Beijing 2022 Winter Olympics. Their performance on the ice is as imperative as their mentorship off of it, and the successful integration of Chinese nationals into the lineup is a reflection of this two-fold success. General Manager Claire Liu once remarked that Shenzhen locals were surprised to see “real ice” during their first appearances in southern China; now, the Vanke Rays hold four of five WHL attendance records, with the largest-ever crowd recorded at 4,100 in January.

High-octane forward and WHL all-star Rachel Llanes has been a key role model for how Chinese players train their bodies off the ice. Initially hired as a player-coach, Llanes can be seen in episodes of the KRS digital series The Week That Was instructing proper form in the team’s home gym. When the outbreak of the coronavirus restricted the Vanke Rays from returning to China for the rest of the season, Llanes’ Instagram stories were filled with snippets of her remote instruction of Chinese national players. Faced with space and equipment limits, Llanes helped the women to continue training during the frightening weeks of quarantine, in addition to posting a game-changing performance in the WHL playoffs.

Noora Räty has served as a mentor this season to goaltender Kimberly Newell, a Princeton University graduate with sights set on a Beijing 2022 appearance for China. As late as the team’s last practice of the post-season, Räty could be seen crouched beside Newell during drills, offering a wealth of experience from four Olympic Games—a stage she is all-too-qualified to prepare her mentee for as selections move closer. Newell won her debut playoff start for the Vanke Rays during the semifinal series versus Tornado Dmitrov; Räty was the first to trumpet the achievement across her well-followed social media accounts.

The Vanke Rays’ clubhouse is a short walk from the Universiade complex in Longgang. I made the trek myself during the WHL home opener in September for dinner, and was surprised to learn that the women were housed together in a dedicated facility. The humidity of Shenzhen clings to you long after the sun sets. Lush patches of green and bougainvillea interrupt a steel jungle of skyscrapers that are forever under construction. This modernist apartment complex, like an American college dorm but a touch swankier, reminds visitors at every turn of the team itself and its singular mission. Even the elevators are stylized with fuchsia decals in the vein of a James Bond opening sequence, bearing silhouettes of hockey players and the words “Kunlun Red Star Vanke Rays.” The conference room is decorated with details you might find at a boutique hotel in Brooklyn. The accent wall is lime green, and succulents are housed on alternating shelves in upside-down lightbulbs. “We Are Family” is stenciled between the windows, and coloring books were littered across the table that day from a recently-hosted event with local children. Across the hall is a miniature museum dedicated to Red Star’s relationship with the 2022 Olympic program; a signed Wayne Gretzky 99 KRS jersey (he is the club’s global ambassador) is ensconced in glass alongside programs and booklets from China’s past international appearances. 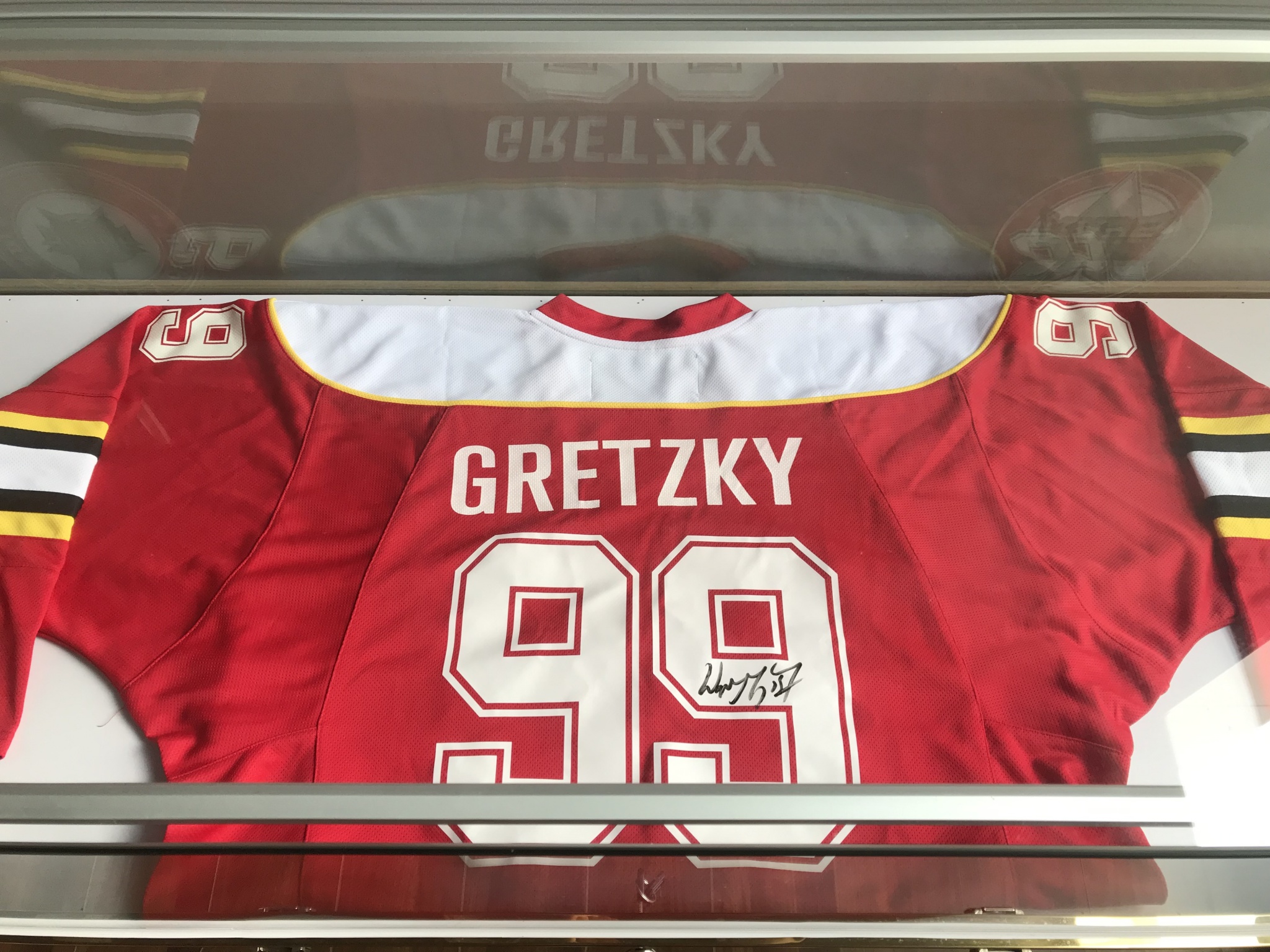 The pillars of Chinese women’s hockey are not merely alluded to in the museum—a major torchbearer stands behind the Vanke Rays’ bench. Sun Rui is the team’s assistant coach and a former Chinese Olympic hockey player. She is tied for most appearances for Team China at 46, and scored a memorable goal on Slovakia at the Vancouver 2010 Winter Games. Her self-described role within the coaching staff is to establish trust between the North American and Chinese players on the team, an integration that is no small task with regard to language barriers and experience levels. “Sunny,” as she is affectionately called by her players, is a living example of the heights to which her young recruits aspire—and she herself is hoping for an Olympic nod in two years, this time as a coach for the team she has helped to build. The Vanke Rays kept track of their playoff victories with a poster, crossing off a puck for each of the five games they needed to win. In the final iteration—with champagne spraying across the locker room, pop music blaring—Sunny was given the honor of scribbling out the final puck.

Whether we broaden to corporate spheres or limit to the sporting world, so much is made of the causal relationship between organizational culture and performance. While certainly still in their nascency, facets of the Vanke Rays’ culture and ritualistic agenda are worlds above what is found elsewhere in women’s hockey. The locker room is staged to magazine-spread perfection; I remember stopping in to the Universiade in November to find head equipment manager Steph Klein vacuuming the central carpet with an obsessive gusto that has even Kunlun’s KHL squad begging to poach her. Klein was trained at the highest levels of men’s hockey and brings an NHL-level of competence to her role; the slogan “Details of Discipline—Discipline of Details” was fastened to the wall of the Vanke Rays’ adopted home in Ufa, an electrical current that is obvious down to the way her team’s electrolyte drinks are individually labeled, or mountains of skate blades are sharpened. Patches bearing the words “Wuhan Strong” were sported by the Vanke Rays throughout the playoffs as a nod to the victims of COVID-19; Klein and video coach Marcus Toye re-ironed every edge of every patch on the sleek, black jerseys that the team sported in Game Three—threads, of course, that Klein herself designed.

This attention to detail and universalist approach to development culminated in a masterful finals performance, with the Vanke Rays trouncing reigning league champions Agidel Ufa in a three-game sweep. The final matchup was a showcase for the Vanke Rays’ spectacular goaltender and top lines; Hannah Miller and Leah Lum logged the afternoon’s first goals, with Team USA stars Alex Carpenter and Megan Bozek ultimately securing the 4-2 victory that sent the confetti pouring in Ufa.

“Over the past three years, we have been delighted to see women's ice hockey taking roots in the tropical city of Shenzhen. Players of our women’s team have become community heroes in Shenzhen and idols for hockey teenagers,” said Kunlun Red Star President Ao Meng, one of many women leaders in the Chinese organization. “What we are proud of is that we have provided a better professional environment for women hockey players to truly become a career choice.”

Carpenter and Bozek, both of whom have played for the U.S. Olympic Team, were among the most vocal cheerleaders for the outlier professional standards of the club. Red Star committed itself to providing living wages and generous bonus structures, in addition to housing the women and ensuring comfortable arrangements on their continent-crossing road trips. Healthy meals that subscribe to North American standards and palettes as well as local ones are always provided; while the women share accommodations on the road, they have their own apartments in Shenzhen. For an exercise in envy, follow the players on Instagram; their feeds are filled with group photos exploring the Great Wall of China, or hopping the beaches of Vietnam during breaks. There is no doubt that the existence is an extraordinary one—an experience neither the Chinese nor North Americans could have ever dreamt of when they were little girls. As recently as five years ago, it simply did not exist.

“My father was a hockey player and his coach [scouted] me to be a hockey player, but my father knew it was really tough for the girls. From the beginning, my parents did not want me playing hockey,” said Qi Xueting (known as Snow), a Chinese-born defenseman for the Vanke Rays. While her parents changed their minds after a bit of convincing, she recognizes that the opportunity set today looks vastly different from the one she faced as a kid. “We didn’t have any professional, international level hockey clubs. We only had system teams—the national team. Now [kids] know that before you play for your country, you can play for a hockey club.”

The upscale Sky Bar of Ufa’s Crowne Plaza played host to the afterparty for the Vanke Rays’ victory lap. The team took turns drinking from their trophy and cheers erupted as KHL TV recapped their historic win on the live broadcast. Even in this moment—a celebration in which self-congratulation might be permitted, even encouraged—many of the women expressed their joy for one another. “When I first signed, it was all about them and so much less about my own career and performance,” Jessica Wong, a local fan favorite and Team Canada U-18 alum, said to me. She gestured to the Chinese-born players, many of whom were in tears lifting their national flag and receiving their medals. Wong scored nearly the first time her blades hit the ice in every playoff round, a major driver in the Vanke Rays’ neutralization of Ufa’s heavy forecheck. Melanie Jue, a North American-born defenseman and former NCAA coach, made similar comments—celebrating the performance of Chinese national Liu Zhixin, a fellow member of the defensive core who logged an assist in Game 2, and one who she has mentored for several seasons. It has become clear that the Kunlun “ambassadors” are no figureheads—they are mentors fully invested in their teammates' success, and the consequences of that buy-in are self-evident.

The further I delved into the architectural design of the Universiade Arena, the more apt a home it appeared to be for the Vanke Rays—their name originally derived from the idea of bringing light to Chinese women’s hockey, although it has since evolved into an animalistic interpretation (the team’s top player is awarded a stingray costume after a win). The Universiade was meant to simultaneously blend with the local topography and to illuminate the skies, an apt metaphor for a team tasked with bettering its home while dazzling on international ice. Perhaps at first, the audacious mission was limited to China—but as the Vanke Rays set professional standards across the landscape of women’s hockey, they shine a light for athletes worldwide.