Young guns shoot for the stars

KHL.ru announces its junior team of the season, comprised of U21 players who have had an impact in the regular season.

Goalies tend to mature later than skaters, so it’s rare to see a youngster make an impact between the piping at KHL level. While forward or defensemen can gain experience incrementally with shifts on the third or fourth line, a goalie either plays or rides the pine. For a youngster, it’s usually more productive to gain game time in the juniors or the farm team. This season’s most prominent youngster was Pyotr Kochetkov. He made his KHL debut with Sochi last season, playing twice, and in between he was named the best goalie at the World Juniors.

In the summer he moved to SKA and, for a time, was competing for a starting slot with Alexei Melnichuk. However, once Magnus Hellberg regained full fitness Kochetkov’s opportunities were limited and he was traded to Vityaz. Pyotr’s most eye-catching performance came in November, at home to CSKA. Igor Saprykin got the start but was back on the bench after 15 minutes and two goals. Kochetkov stepped up, stopped 36 pucks and took the game to overtime before he was beaten at last. Admittedly, once Ilya Ezhov returned to full fitness, Pyotr again played second fiddle. But the future still looks bright for this promising youngster: after all, goalies mature later. 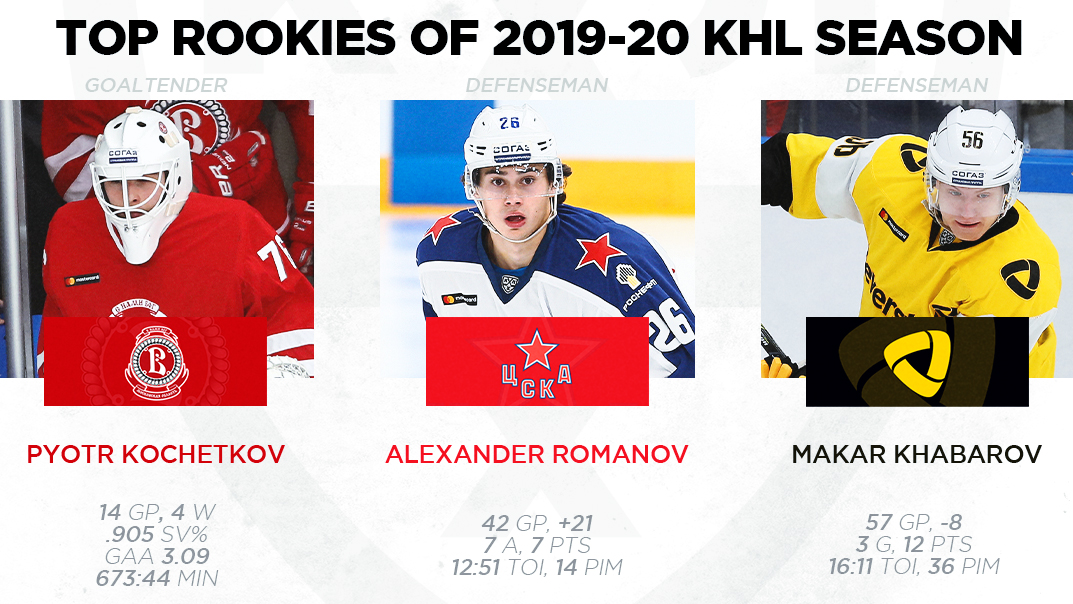 Like Kochetkov, Alexander Romanov was a star at last year’s World Juniors, where he was named top defenseman. And in this year’s championship, he proved himself to be one of the best prospects around. CSKA has incredible depth. At any other team, Romanov would likely be clocking around 20 minutes a night; at CSKA, though, fewer minutes might have more value as he plays alongside top class team-mates. And the head coach, Igor Nikitin, is a former defenseman himself. He knows exactly how to keep his young prospect fresh, regularly giving him time in the first or second defensive pairing. Romanov isn’t a free-scoring blueliner, more of a universal player, although he’s put up some decent figures at junior level. This season he is still awaiting his first goal, but his +21 rating is bettered by just eight of his team-mates. Romanov has just one goal in his KHL career, coming late last season against an Ak Bars team coached by his grandfather, Zinetula Bilyaletdinov. After the game, Bill smiled: “Today, my grandson beat me.”

This is Makar Khabarov’s third season in the KHL, but his first as a regular member of Andrei Razin’s first team. Severstal was the youngest team in the league this season. Khabarov is a Cherpovets native, he learned his hockey in the Severstal school and according to Razin he is already subject to the attentions of the league’s top clubs. Why? The stats show he’s the third highest-performing defenseman in his club, fifth for blocked shots and second on the entire team for hits. He also earns his team more power plays than most; only Daniil Vovchenko drew more fouls this season. Khabarov’s progress has not gone unnoticed: Oleg Bratash called him up for Russia ‘B’ at this year’s Slovakia Cup.

Kirill Marchenko is the youngest in this virtual line-up. He won’t celebrate his 20th birthday until July. Not surprisingly, then, he has played fewer games than any other skater on this list. However, with 16 points in 30 games he is the third-highest scorer of any U21 player in this season’s competition. He was also only the second SKA player to score 20 points in a season before his 20th birthday, and the first in the KHL era. Marchenko’s position at SKA resembles Romanov’s at CSKA: a stacked roster limits his game time, but top-class team-mates help him to learn fast. Kirill’s progress is visible to any observer. At the start of the season he tended to get up to five minutes in a game, but since the New Year he’s been logging at least 11 or 12. And at the recent Swedish Hockey Games, Marchenko and his SKA colleagues Morozov and Podkolzin did not merely make up the numbers but looked genuinely impressive in the exalted company of Team Russia. Last week Kirill had five points in three games, scored twice on Jokerit and was nominated as the rookie of the week. 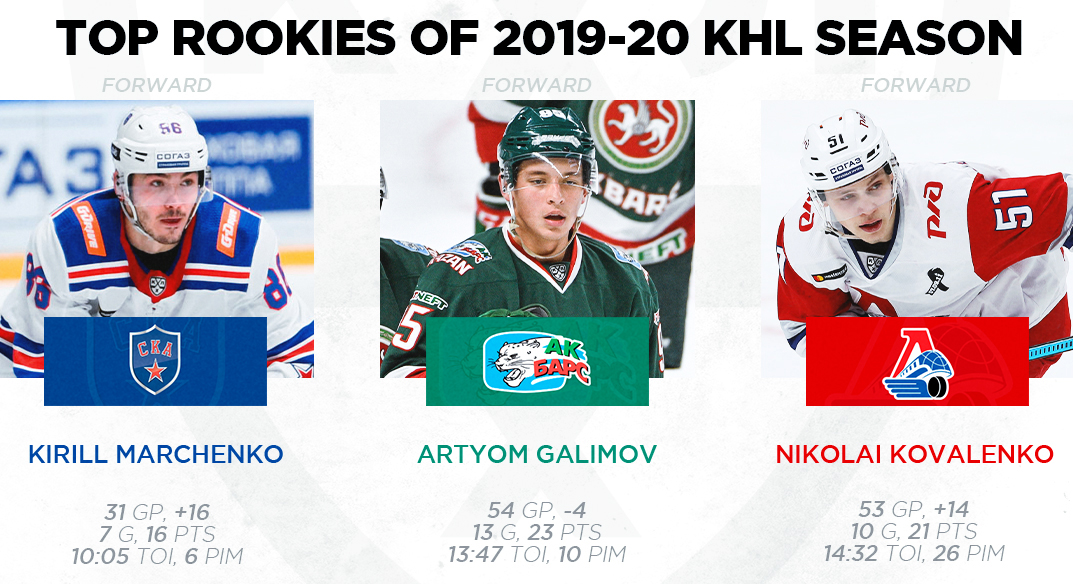 For Artyom Galimov at Ak Bars, the usual problems of age and game time simply don’t apply. Despite the powerful roster in Kazan, head coach Dmitry Kvartalnov regularly trusts the young forward with 18-19 minutes on the ice – and that faith has been repaid. Its true that eight Ak Bars players have outscored the 20-year-old this season, but ninth place in his rookie season is not to be sniffed at.

Galimov’s most eye-catching game came on Jan. 5. After two periods, Kazan was down 0-3 at home to Barys. But the fightback was on, Galimov had three assists and the scores were tied in the last minute. Then, in overtime, he got the winner. That was one of eight decisive goals for the youngster this season; only Dynamo’s dominant Dmitrij Jaskin can match that return.

The son of the famous Russian Tank, Nikolai Kovalenko is proving his own worth as a mature and versatile player. If you need a playmaker, he can do that. If it’s time to do the dirty work in the corners or on the slot, he’s your man. And, of course, he scores goals too. He shares the top rating among Loko’s forward with Artur Kayumov – both on +14 – although Kayumov’s line is more likely to score and Kovalenko’s is less likely to concede.

Kovalenko Jr doesn’t shy away from a physical battle. His 94 hits are by some margin the most among Loko’s forwards, and ahead of most defensemen as well. He has earned 22 penalties this season, topping that metric in Yaroslavl and placing him seventh in the entire league. This was clearly shown in a recent 5-0 thrashing of Jokerit. Four times, the Finns fouled him; three of the penalties led to goals. And the only equal-strength goal of the night was scored by Kovalenko himself.