In this exclusive interview, Spartak's forward told KHL.ru what it is like to be working with Oleg Znarok, raising his daughters, his last year's injury in the playoffs series against SKA, his ties with planes, and much other.

This season, the Red-and-Whites can feel even more attention than last year. Mostly, this is due to Spartak's new head coach. Kaspars Daugavins and Oleg Znarok know each other for a long time – Znarok called Daugavins to the Latvian junior national team fifteen years ago. And now, after such an extended period, they are together again, this time on a much bigger stage. The 31-years-old is having a career season, but the most important games are still in front of Daugavins: Spartak has big plans indeed for the playoffs.

"These games will be at the same level as the playoffs"

After the February Euro Hockey Tour pause, Spartak had a hectic schedule, having to face Ak Bars twice, Salavat Yulaev, and Metallurg, among the others. "I think that facing this kind of team will help us," Daugavins says. "These games will be at the same level as the playoffs. We have a good chance to get ready for the postseason." In November, Daugavins told the media that he had the feeling of having played the whole regular season. "The start of the season is harder," he explains. "We played almost half of the regular season in two months. Then, in November, the pauses for the EHT begin, then you have a chance to rest a little bit during the New Year vacations. Now it feels a bit easier, although the end of the regular season will be taut." 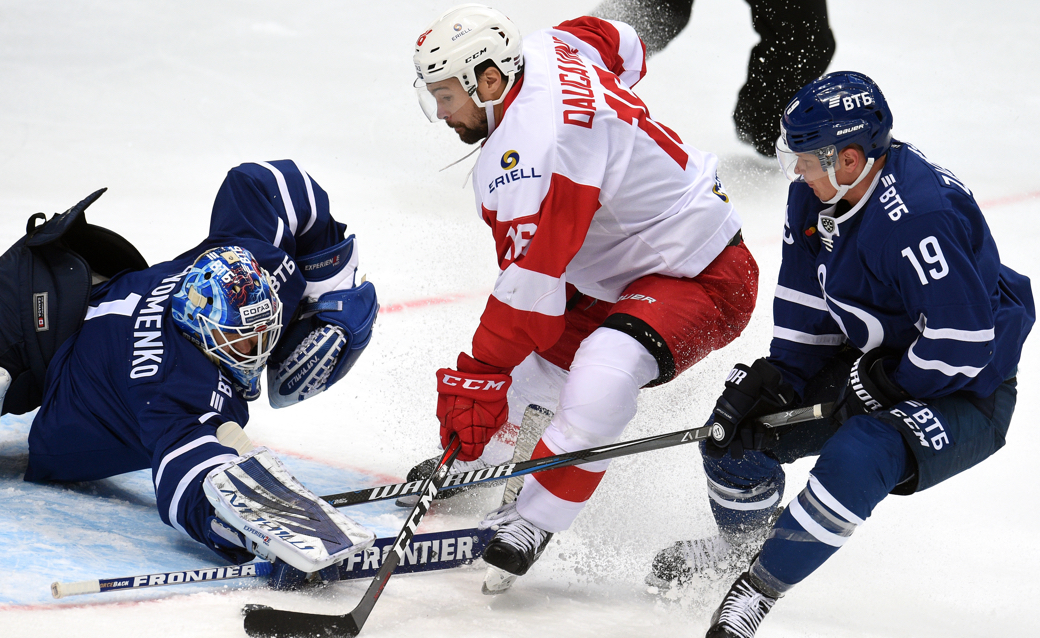 This summer, Spartak significantly changed after the appointment of Oleg Znarok – a coach that has a long list of accolades, including gold medals at the World Championship and Olympic Games level, other than three Gagarin Cup titles. However, players enjoy a reasonable rate of freedom. "We can spend the night before home games either at the hotel or home," Daugavins says. "On the match day, we have the morning skate, then we all go to the hotel. Of course, I prefer staying at home. I enjoy spending time with my wife and daughters. If I stay at the hotel, I won't have a chance to see my family, and it would be the same as being on the road all the time."

More than once, Znarok declared that he doesn't look at the standings with the season going. The players seem to have a similar approach. "We know what happens in the standings, but we don't look at them every day. It's good to know where you are, but you need to focus on yourself first. We play each game to climb the standings, and we want to finish on the top four, so to start at home."

"You need to outwork your opponent to win a game"

Last year, Spartak had a sensational start of the playoffs, leading 2-0 over SKA after the first two games in St. Petersburg. "Each season is a brand new history," Daugavins says. "Of course, that performance helped us. When you have confidence, anything can happen. Last year we had a good start, this time around we need to find a way to win." The White-and-Reds have some consistency problems, however. As an example, Spartak defeated SKA three times this year but recently lost 0-4 to Dynamo Moscow. "If you don't have the right attitude, you're going to lose. I think that we played OK against Dynamo, we had a few chances. If we buried them, we'd have a completely another game."

Their Muscovite rivals defeated them three times during the current regular season. Maybe the two sides will be able to clash again in the postseason. "In the playoffs, it's a whole another game. A single mistake can cost you a game, if not a series. You need to be entirely focused. I hope that this year we can win more games." Many say that today the teams are more balanced between each other. But has the quality of the product improved? "Hockey is in a phase of changes," Daugavins replies. "Ten years ago, we played a different game. Technique-sound players could skate through half of the opposition and score a goal. Today, athletism is more critical. Working hard plays a bigger role. You need to outwork your opponent to win a game. However, even today, fans can enjoy beautiful goals and exciting games. Having more Canadian-sized ice pads is a good thing; hockey is more aggressive and spectacular. There are more battles for the puck, hits, and similar plays. I like the smaller ice surface the best: there is less time, more battles, and you need to think one step ahead."

Returning to that 0-4 defeat at the hand of Dynamo, it's hard not to imagine an incensed Znarok after the game. "Of course, no coach likes when his team loses a game. However, after the match against Dynamo, Znarok was quiet; he supported us and told us where we need to improve. As I said, we had a good number of scoring chances. But there were some moments when he was livid at us. Usually, coaches get angry not because of a loss, but how a loss is achieved. If the players give their hundred percent, then it can happen. But if the players have a bad game and lose because of their attitude, then the coaches are going to be very angry."

"Znarok is ready to do anything it takes to win"

Daugavins already played under Znarok fifteen years ago in the Latvian junior national team. "He was the same as he is today!" – he says. "His stronger trait is his love for the win. He's ready to do anything it takes to win. And he demands the same to his players." The Latvian forward says to have changed a lot. "When I was 17-18, I was a little bit crazy. I run a lot around without even knowing what I was doing. Now that I passed the 30-year mark, I understood that I need to be quieter, and sleep and rest more. Plus, I've got kids now. I spend most of my days with them. When I was 20, I always had enough energy for anything. In my last year in the NHL, I realized that I needed a more professional approach. I observed my more experienced teammates and took some conclusions." 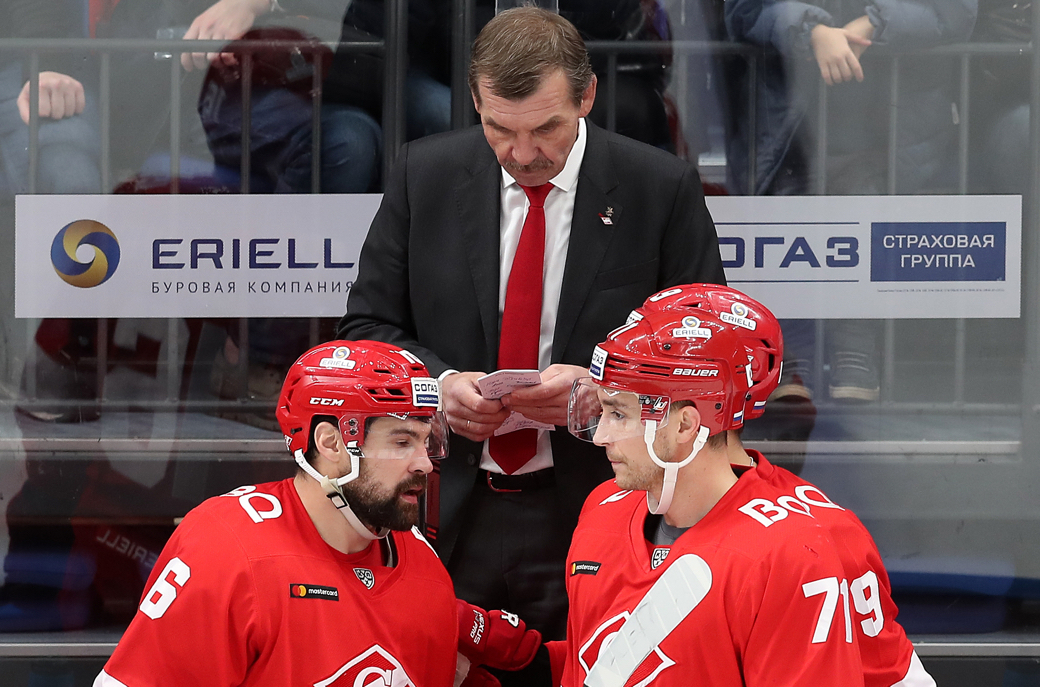 Right now, Daugavins is having his best season in the KHL aged 31, just like he's living a second youth. So far, he scored 36 (16+20) points in 53 regular-season games. "I think that we have a great team, and I have fantastic partners. We had a few bad moments – at the start of the season, for example. We played well but couldn't score. It was hard, but then it was easier." Earlier in the season, it was rumored that Daugavins could have been traded to Traktor or Torpedo. "It helped me," he recognizes. "Hearing this news gave me more strength and more confidence. I started playing better right away. However, it doesn't work every time. Sometimes you need not read the news."

"I lost a lot of blood from my mouth, the doctors were panicking"

Last year, Daugavins' wife was about the give birth to their second daughter, when he seriously injured against SKA. "It's hard to explain what happens in these moments. For us, the players, injuries are part of the game. I remember that once a coach told me: 'if you think about injuries, you're going to pick one up.' Against SKA, everything happened so fast that I realized everything only after a couple of days. The most important thing is that now everything is OK with both my wife and me. However, that moment was so stressful for her also because of me." In this kind of situation, it's also hard to focus on yourself.

However, Daugavins' injury was severe. "I lost a lot of blood from my mouth. I couldn't understand what was going on. The doctors were panicking and screaming that my lungs are gone. Frankly speaking, I scared up a bit. However, when later at the hospital, I was told that everything was going on well, then I stopped thinking about me. I needed four days of controls as I lost a lot of blood. And I was also told right away that I couldn't take a plane for at least one month. When the guys played their last game against SKA, I was already in Riga – I jumped on a train." Being at home wasn't easy, though. "Our second daughter was born one month earlier; thus, my wife spent quite a lot of time at the hospital herself. I was with her, and our older daughter was at home. It was a little shock for her – she was without her mama for a week. She's only four years old."

The Latvian forward is also known for his lack of pleasure in flying. "I think that with every year it's going worse and worse. I am just sitting there and watching the walls. I can't even watch a movie. But this is a part of our life, what can we do? When we fly to the Far East, it's very hard. The most important thing is not to feel turbulence. I try to sleep; we use special mattresses." Daugavins played in many different leagues and countries, from Latvia to North America, to Switzerland and Russia. But right now, the most-coveted trophy for Daugavins is the Gagarin Cup. "No Latvian player won the Gagarin Cup so far; being the first one would be fantastic. This is why I work, and it's my goal number one." 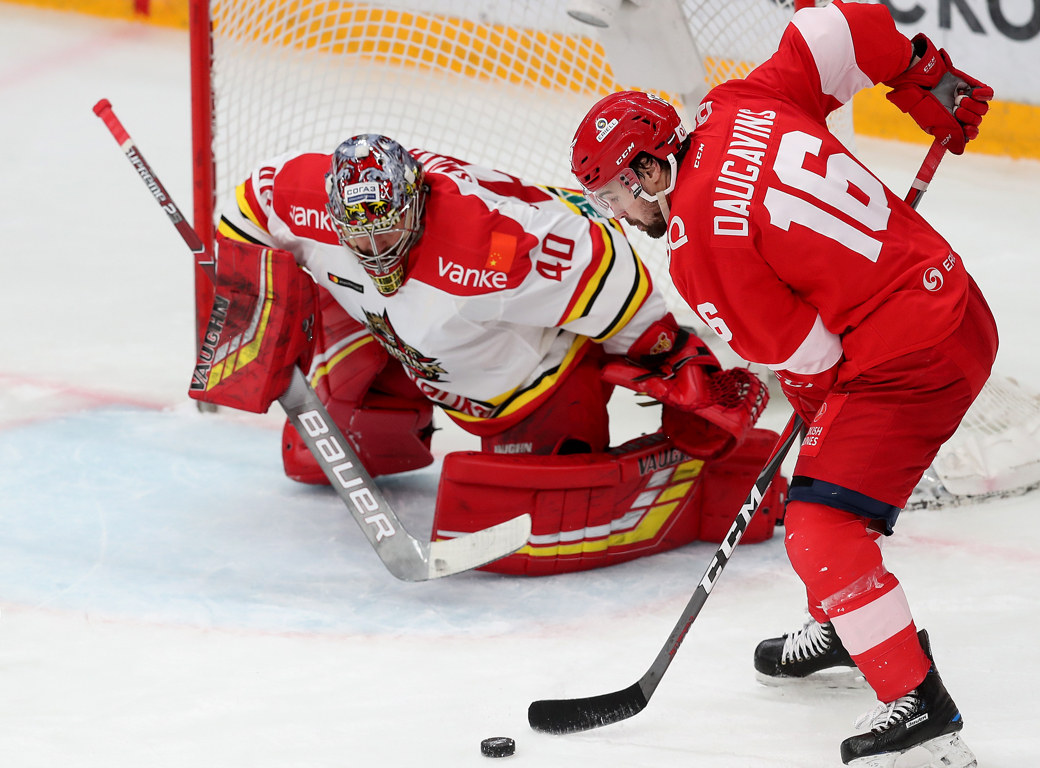