Ice Diaries: a Behind the Scenes Look at the Beautiful League

The unofficial Soviet hockey anthem was a song entitled “Трус не играет в хоккей,” or “No Coward Plays Hockey.” It was composed in 1968 and rose to prominence during the Summit Series of the 1970s.

The lyrics declared that “only real men play hockey” in Russia—a stereotype that has been spectacularly disproven in later years by a crop of supremely talented women.

The Женская хоккейная лига, or WHL, has set the operational standard—employing the knowledge base and financial resources of the KHL to create a home for elite female hockey players.

With multinational clubs located in two countries, the WHL has attracted global talent since its inception in 2015—including Olympians that have represented Russia, the United States, Finland and the Czech Republic, among others. After the dissolution of the Canadian Women’s Hockey League (CWHL) in 2019, the WHL added the high-octane Vanke Rays based in Shenzhen, China, advancing the overall competitiveness and international reach of the league. The regular season, consisting of 112 games, lasts from September until February, and will conclude with a four-team playoff run in March.

The WHL calls seven cities home across five time zones, targeting not only hockey hubs like Saint Petersburg, but also regions where the KHL does not have representation such as Krasnoyarsk. The aim is to attract young women who will draw inspiration from WHL stars, as well as male fans who lack a local KHL team or desire more hockey to watch. 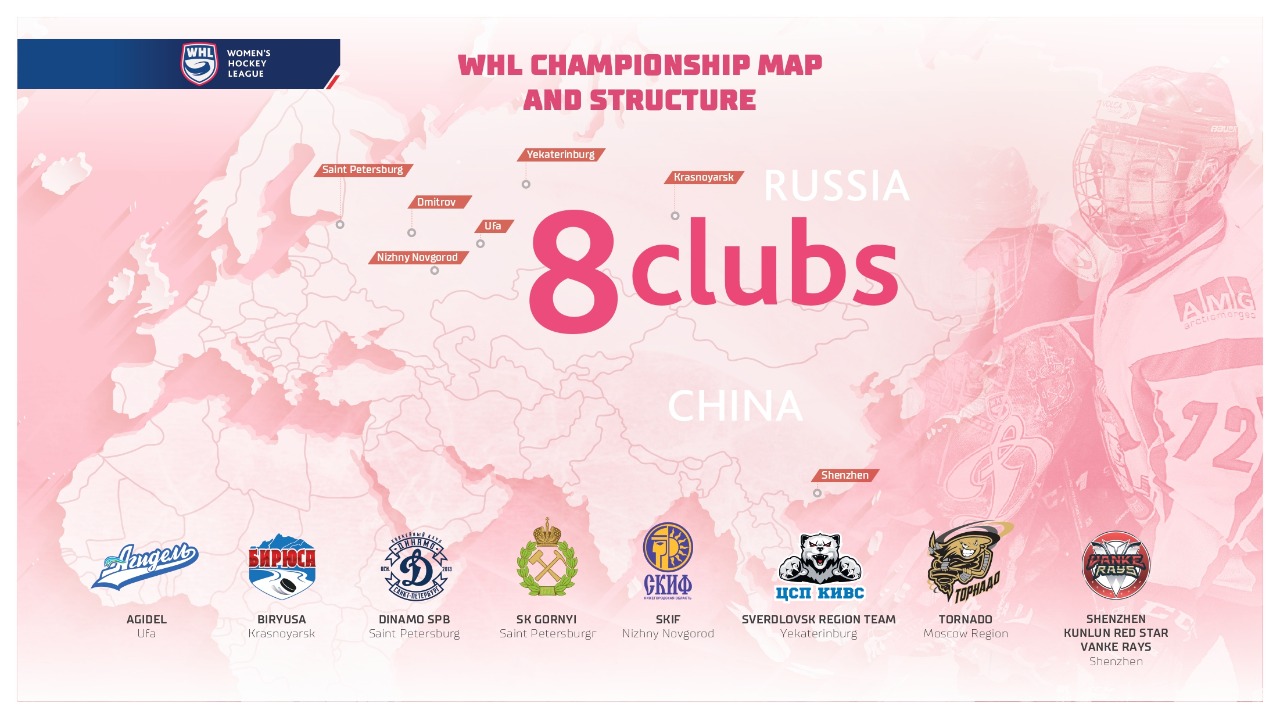 KHL and NHL veteran center Alexander Semak is a walking encyclopedia for the WHL. The Agidel Ufa sporting director who played for Salavat Yulaev, the New Jersey Devils and other top teams keeps obsessive watch over recruits, box scores and headlines—an obvious passion that borders, perhaps, on professional obsession. His dedication has certainly contributed to on-ice success, with Ufa’s women leading the league entering this year’s playoffs.

But it was not Semak himself who first described this commitment to me, rather it was his daughter—a perfect metaphor for a central point about the league that has underpinned its growth:

Russia’s WHL allows its talented women to do the talking on the ice, but a dedicated faction of men champion the league on its sidelines.

“It's no secret that five years ago, women's hockey was a semi-amateur association of teams without any clear rules, regulations, and without a stable line-up of teams playing in the championship,” Semak explained in an interview from Ufa. “Once the KHL took the WHL under its wing - this stability finally appeared where the rules and regulations for the participants of the championship became clear. Due to contracts similar to the KHL, responsibility was introduced not only for players’ commitment towards clubs, but also the other way around - the clubs showed their commitment towards their players. The combination of these things began to produce results. The league’s visibility is growing every year and the number of teams are increasing.”

Agidel’s nearest rival is one such expansion team: the Shenzhen Vanke Rays, making their league debut this season with astounding success. U.S. Olympian Alex Carpenter and Finnish goaltending star Noora Räty play alongside Chinese-born talents such as Zhixin Liu and Qi Xueting, the latter pair developing with an eye to represent China at the 2022 Winter Games in Beijing. Chinese heritage players from North America also round out the squad, including Princeton University graduate Kimberly Newell. The 24-year-old goaltender represented Team Canada at the U-18 World Junior Championships.

The Vanke Rays’ General Manager Claire Liu is a rare female executive in the world of professional sports. A former competitive swimmer, Liu credits the Vanke Rays with bringing ice hockey to the subtropical tech hub of Shenzhen. “I think we get more and more fans and support in Shenzhen,” Liu shared in September. “At the beginning, when we had the first few games, some fans saw what hockey was [for the first time]. Sometimes they’d even say, ‘Wow, this is real ice!’ Not a lot of people know about hockey and women’s hockey in the southern part of China. After more than two years’ experience here, with so many home games and community events with local families getting to know [the team], you will see that at our opening [WHL] games we had more than 3,000 fans here supporting us.”

The adoption of the Vanke Rays continues to aid hockey’s first foray into China. And while the sport has a long history of devotion in Russia, the WHL still aims to debunk pervasive stereotypes about female participation.

For those who attended the WHL All Star Weekend in Moscow this January, the level of investment and attention to detail was self-evident. A pre-game show consisting of pyrotechnics, synchronized skating and electric violins rivaled the spectacle of the men’s event. The women showed off their colorful senses of humor between the periods, including a Jaromir Jagr impersonation from Czech forward Alena Mills and a Teenage Mutant Ninja Turtles routine from 2010 Olympic goaltender Anna Prugova. 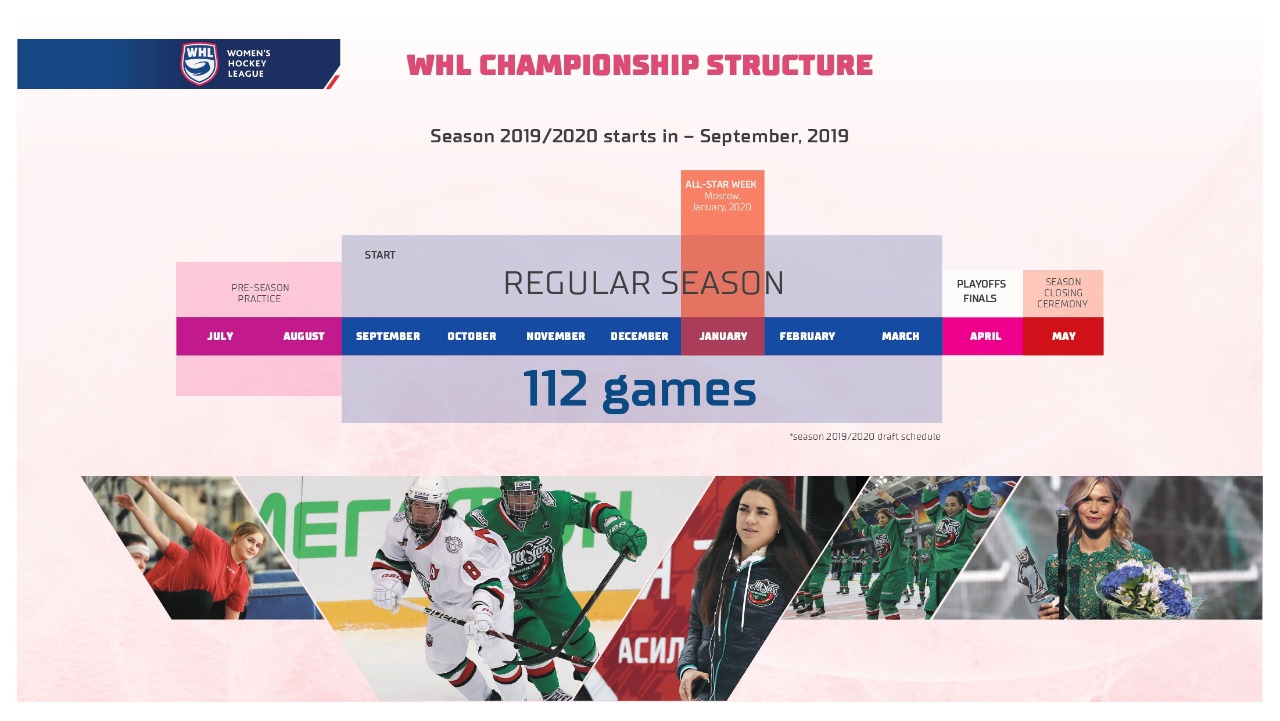 One of the most enduring images of the weekend featured Russian powerhouse Ludmila Belyakova. The Tornado Dmitrov forward capped her All-Star experience with a celebration at center ice, showing off her newborn son. Belyakova returned to regular season play from maternity leave in the fall, and will rejoin the Russian national team for the first time this week. She has posted a jaw-dropping 7 goals in 10 games since her return.

With an eye to continued expansion, the WHL and KHL have agreed to a long-term strategy that will improve upon a multitude of areas, including marketing, television, communications and officiating. While there is plenty of work to be done, success at the international level has already been demonstrated at this year’s IIHF World Juniors Tournament in Bratislava. The Russian national team won bronze with 16 WHL players on their roster; the gold medal match between America and Canada was officiated by league referees.

“Women want to play in a league like this - a large group of talented juniors are on their way,” Semak said, a view supported by Russia’s performance in Bratislava. “[This] will further increase competition within the WHL teams and the Russian National team. I’ve been working in women's hockey for 3 years now and it’s appealing to me because of the dynamic development of both the league and teams, as well as the players. For example, more than half of the team in Agidel are players under the age of 20. And for us, together with the coaching staff, it’s interesting to watch the progress and development of both the game and life skills amongst our junior players. It’s gratifying to observe that our joint efforts are not wasted.”

Even the Russian Hockey Museum—located on the grounds of CSKA Arena, focused largely on men—pays homage to the growth of the women’s game, currently honoring the history of SKIF Nizhny Novgorod in a special exhibition.

As the KHL redoubles its efforts to improve visibility of the WHL, we are excited to expand English-language coverage of the league and its personalities. You will find exclusive interviews, match previews and more right here—so stay tuned as the 2019-2020 regular season draws to a close.

(By the way: the famous Soviet song mentioned at the beginning of this piece—a men’s hockey anthem for 50+ years—has an incredible plot-twist. It was actually composed by a woman!)