Vasily Podkolzin: "When you have a chance, you need to use it"

In this exclusive interview, the SKA forward talked about his first points in the KHL, SKA's prospects line, and his call to the Russian senior national team.

After the WJC, the career of one of the most exceptional young Russian talents definitely had a boost. With Kirill Marchenko and Ivan Morozov, Vasily Podkolzin was called up to the big boys and started scoring points right away. In the latest five games, Vasily amassed 4 (2+2) points. He opened his account in the KHL with a goal against CSKA, the game that kickstarted his four-game scoring streak. Last week, the 18-years-old forward was awarded Best Rookie honors and a call to the Russian national team for the third stage of the Euro Hockey Tour.

"I could score another three goals and have four assists more"

On Jan. 30, SKA managed to defeat Avangard only on SO, failing to score for three periods. "We had our chances," Podkolzin says. "However, it was a close game; no one wanted to allow an inch. I think that we played very well in the second period in the offensive zone, we only had to score. Luckily, we have a player like Vladimir Tkachyov."

Podkolzin is known for his critical approach towards his game, even now that he scored four points in five games – quite a loot for any 18-years-old player. "I could score another three goals and have four assists more," Vasily confirms. "You can always play better, and it's impossible to be satisfied at the hundred percent with your game."

However, he doesn't deny that the WJC gave him a good boost. "I think that the tournament helped me on a psychological level," Podkolzin explains. "I gained confidence, and it helped me playing well for SKA." Recently, Valery Bragin, the head coach for the Russian junior national team, joined SKA to assist Alexei Kudashov on the bench. Young players are continually praising him, and Ivan Morozov has recently labeled him as a "second father" for the players. "So many young players worked under Valery Nikolayevich, we won't have any problem working with him again," he says. "Morozov is right; he's like a second father to us. It's the second year that I work with him." Bragin was hired by SKA to work on the powerplay and offensive plays. "We practice these aspects every day," Podkolzin explains. "He can talk with any of us; he knows everyone. We're working hard." 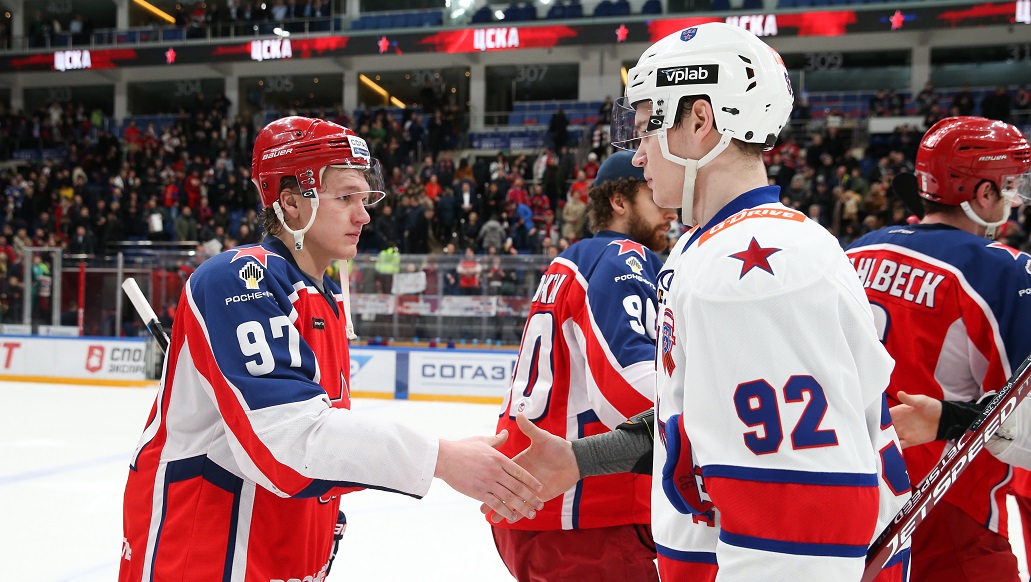 "I never played in the middle, however, I am not against it"

As said before, Vasily scored his first goal in the KHL nonetheless than against CSKA. "I scored against them, but we lost. I have mixed feelings about it. Of course, I was glad to have finally scored. The goal gave me a boost of confidence, and I wanted to play more with the puck and score again. It's hard to describe these emotions." In previous interviews, Podkolzin said that his first goal should have been a trash one, a goal where he had to work hard his way through it. Instead, he scored a beauty. "I don't think so," Podkolzin minimizes. "Nikita Rtishchev unintentionally fixed the puck for me, and I only had to put it on goal."

Valery Bragin said more than once that Podkolzin could also play as a center. "I never played in the middle," Vasily says. "However, I am not against it. We'll see." He will have to work on his play on the dots, though. "I think that faceoffs are a lottery. There was a player at the WJC, Sweden's David Gustafsson; it was like the puck was going on his side with no one even noticing it. You have to practice a lot to reach that level, and I never did it." 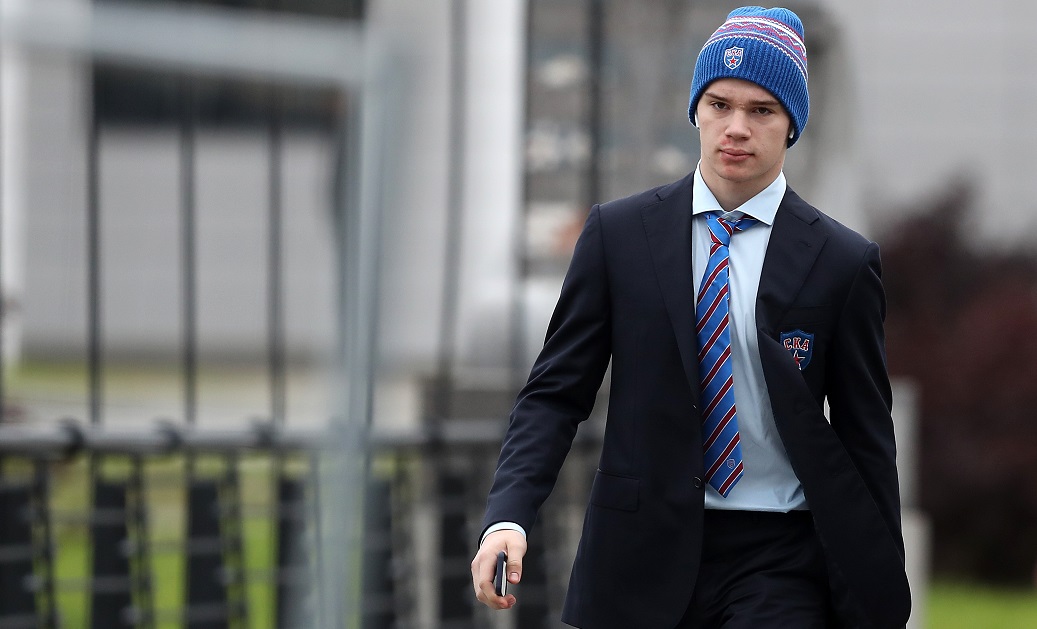 "It was only emotions"

Many think that the young guns' line of Podkolzin, Morozov, and Marchenko can't play like this the whole remainder of the season. "Of course, we may take a break. We're humans!" – he admits. "However, I feel great, and I think the guys feel great as well. You know, we can't really forecast how we are going to play the next game. The most important thing is to stay in touch during the match. We talk, pass the puck to each other, and try to play our best game. We hope to reach good results this way."

Last year, Podkolzin's line played together in the VHL, but they didn't have such an impact. "When you have such a chance, you need to use it. The guys and I sat down and talked, and quickly understood that we might well not receive another one. And things started doing well." However, in the game against Dinamo Riga, they didn't play as well. But Podkolzin wasn't scared. "I believe in my linemates, and they believe in me. This trust helps a lot. We wouldn't play as well if we didn't go along." Later that week, Podkolzin had his first fight in pro hockey after an altercation with Minsk veteran Shane Prince. "Everything happened just off the anger as I wasn't the one to blame there. I don't know why he started getting behind me. It was only emotions. Then I had a look at the fight...I think if a professional boxer would see it, then he'd say 'what's this stuff?' I still have to work a lot on my technique."

Morozov and Marchenko have recently inked a new contract with SKA, until the end of the 2021-22 campaign. However, Podkolzin says not to have any negotiation going on with SKA. "I still have one year on my contract, so it's early to even think about a new one. I am not thinking about it at all." 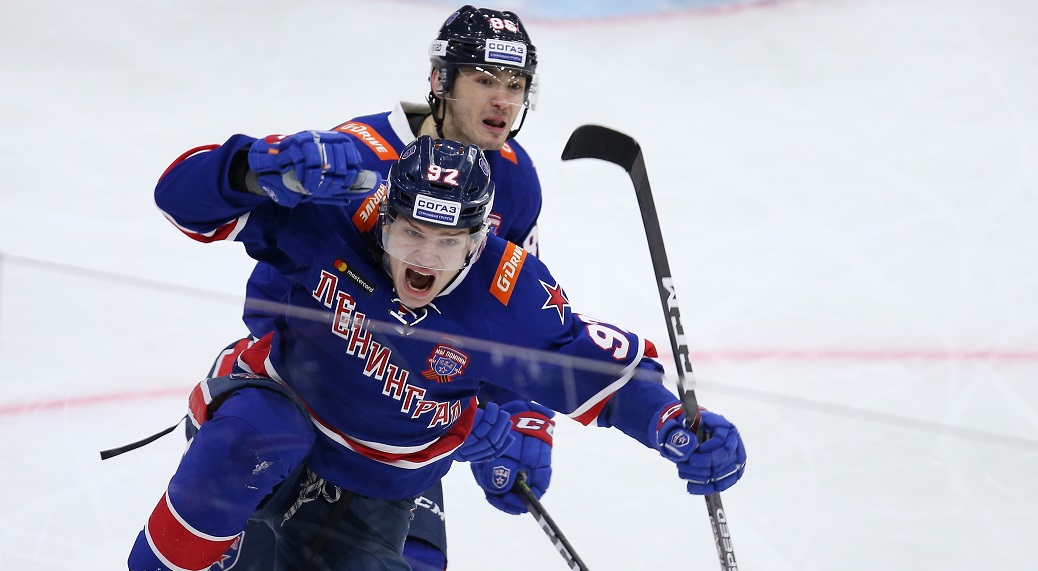