Russia got off to a disappointing start in the latest stage of the Euro Hockey Tour. Alexei Kudashov’s team went down 0-3 in Finland after giving up three goals in seven minutes in Helsinki.

A very young Russian team – captain Bogdan Kiselevich was the elder statesman at 29 – was caught cold by Finland. The first attack almost saw Teemu Pulkkinen open the scoring and the Dynamo forward did not spurn another opportunity seconds later. Soon afterwards Julius Nattinen, the younger brother of Vityaz forward Joonas, doubled that advantage as the Russian defense parted all too easily to allow him a shot on goal.

Timur Bilyalov was enduring a tough evening and the end came for him on 6:56 when Julius Juntilla redirected a point shot to make it 3-0. Alexander Samonov took over in goal and the SKA man did a good job of keeping the Finns at bay for the remainder of the game. His composure spread to his defensemen and Finland had noticeably fewer chances. However, his colleagues were unable to generate the offense needed to haul Russia back into contention.

The game was played at the Helsinki Ice Hall rather than the more familiar Hartwall Arena, home of Jokerit. This cosy old venue proved rather inhospitable for Russia’s players; the team moves on to Stockholm for the weekend’s games against the Czechs and the Swedes. 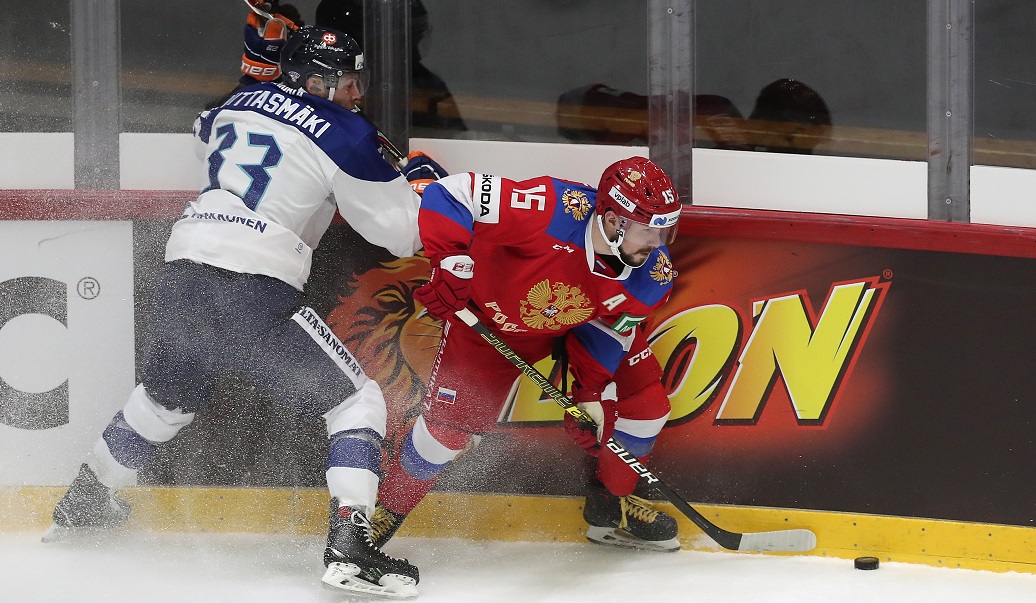 Clearly we got it wrong at the start. We thought we had the team set up, but we got it wrong. In the second period, the game was more even but our finishing was lacking. We started to see what we wanted to see, we controlled the puck but we couldn’t get any goals. On the plus side, we can say that Morozov’s line played well.

There were a lot of nerves today. For many guys, this was the first game for the national team. We told them to expect a different game, different speed. Players need to skate faster, think faster, the physical game is different. Now they have seen it for themselves and realized what it is.

We didn’t plan to start with Bilyalov, but it was out of our hands. Igor Bobkov got a bit sick. Timur is OK, the guys are right behind him.

I didn’t expect to get on the ice but goalies always need to be ready. At the start we didn’t do what we planned, our mistakes put us off our game a bit – I guess people were a bit nervous. But after that we got it together and played some decent hockey. We couldn’t score tonight but I’m sure we’ll do that in future games.